The expansion of human populations has resulted in the destruction of natural habitats, leaving wild animals with fewer places to live.  According to the World Wildlife Fund, habitat loss is the largest threat to wild animals. 17 million hectares of tropical forest is lost every year, and about half of our original forests have already disappeared. Agriculture is responsible for the majority of deforestation and forest degradation, leaving behind a devastating loss of biodiversity that reduces the forest’s ability to produce a healthy ecosystem that’s able to support wildlife.

Commercial development is another cause of habitat destruction. Forests, wetlands, and prairies that once provided a home for wildlife have been removed to make way for housing, commercial buildings, shopping centers, roads, and parking lots. All of this destruction is forcing animals into communities, increasing interactions between animals and humans, and leading to a conflict that poses a danger for both.

When animals lose not only their habitat but also the prey that serves as a food source, they find themselves needing to turn to other sources.  As a result, we see an increase in animals getting into garbage, destroying gardens and crops, and attacking pets or livestock. Encounters with humans can become dangerous, leading to injury — or even death. These increased interactions have lead humans to view them as a nuisance, putting them in danger of being killed in retaliation, or having their populations decreased through legal and illegal hunting practices.

Conflict Occurs in Both Rural and Urban Areas

In rural farming communities, the clearing of wild habitats for livestock pastures forces wild animals to hunt closer to human populated areas, where they end up killing livestock or eating crops. In rural Africa, elephants serve as a threat to farmers because they can destroy crops by trampling and eating the plants. Since many of these farmers are extremely poor, the destruction of their livelihood is devastating and results in resentment and retaliation toward wild animals.

In India, tigers, elephants, and pigs pose a problem for farmers, with attacks on both crops and humans being of major concern. In North America, the culling of wolves was used as a method of population control when they became a threat to livestock and humans, leading to the species becoming endangered, then lowered to a “threatened” status decades later.

Urbanization is another factor that causes the lives of humans and wild animals to collide. In Europe, Canada, and North America, bears are seen as a dangerous threat when they come into populated areas to raid trash cans. Other complaints include raccoons getting into garbage, deer and rabbits eating garden plants and vegetables — even squirrels and bats are also seen as a nuisance. Pest control services will come to take animals and relocate them, but that puts animals at risk by potentially taking mothers away from their young. And it only provides a temporary solution, especially as we leave them with fewer places to go. 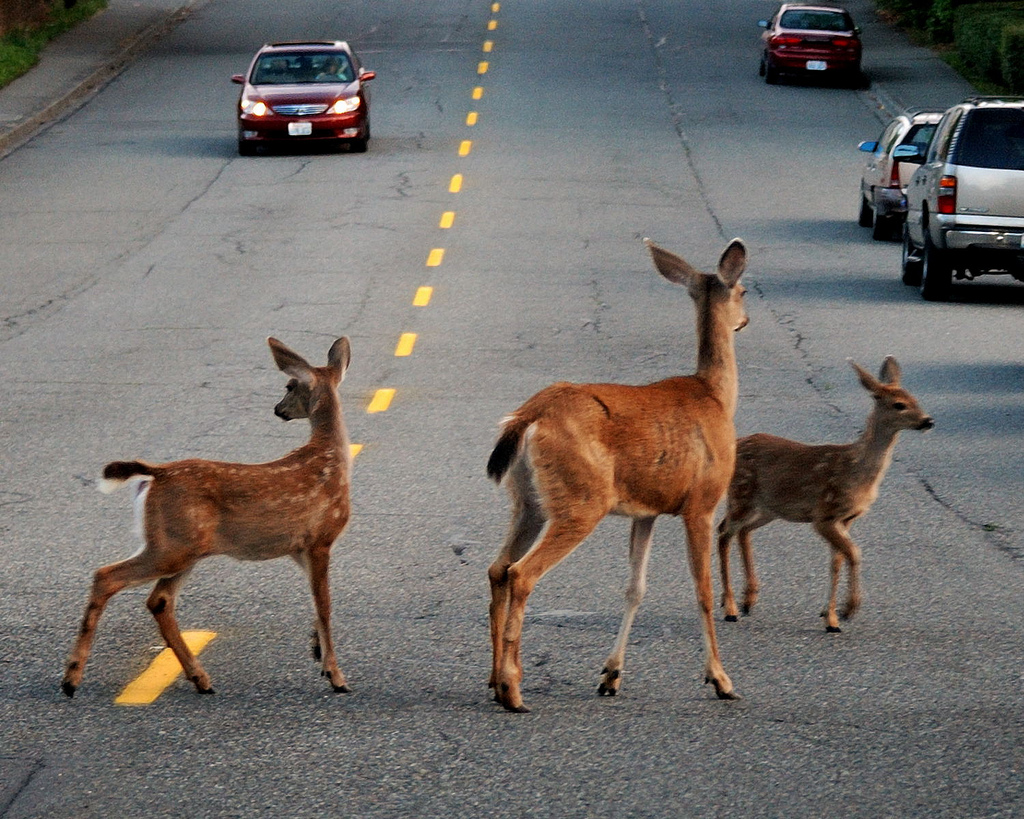 We can hope for a peaceful coexistence once we stop viewing wildlife as a nuisance and remind ourselves that they are only trying to live and survive, just as we are. Humane, non-lethal approaches to population management and prevention of human-animal conflict are a reasonable approach to hunting, trapping, and other methods that result in the killing of animals.

Farmers in Africa and India have been able to keep wild animals at a safe distance by planting chili pepper plants or burning chili pepper bricks, both of which produce a taste and odor that is unpleasant to certain wildlife. The installation of beehives is another creative measure used to keep animals at bay. Fences, whether standard or electric, can also protect livestock by keeping out predators. In urban areas, keeping garbage in a garage or in locked containers can help prevent animals seeking food from coming onto your property. There are also simple, humane methods that can help protect gardens and property from potential damage.

Rethinking the way we use land and offering compensation for lost crops or livestock are other ways programs are helping to foster better relationships between humans and animals. The Human-Wildlife Conflict Collaboration (HWCC) and the World Wildlife Fund are two of the many organizations working to aid conservation efforts by offering trainings on ways to end human-animal conflict.  With a bit of effort, we can all do our part to create a world where humans and wildlife can live together in peace.