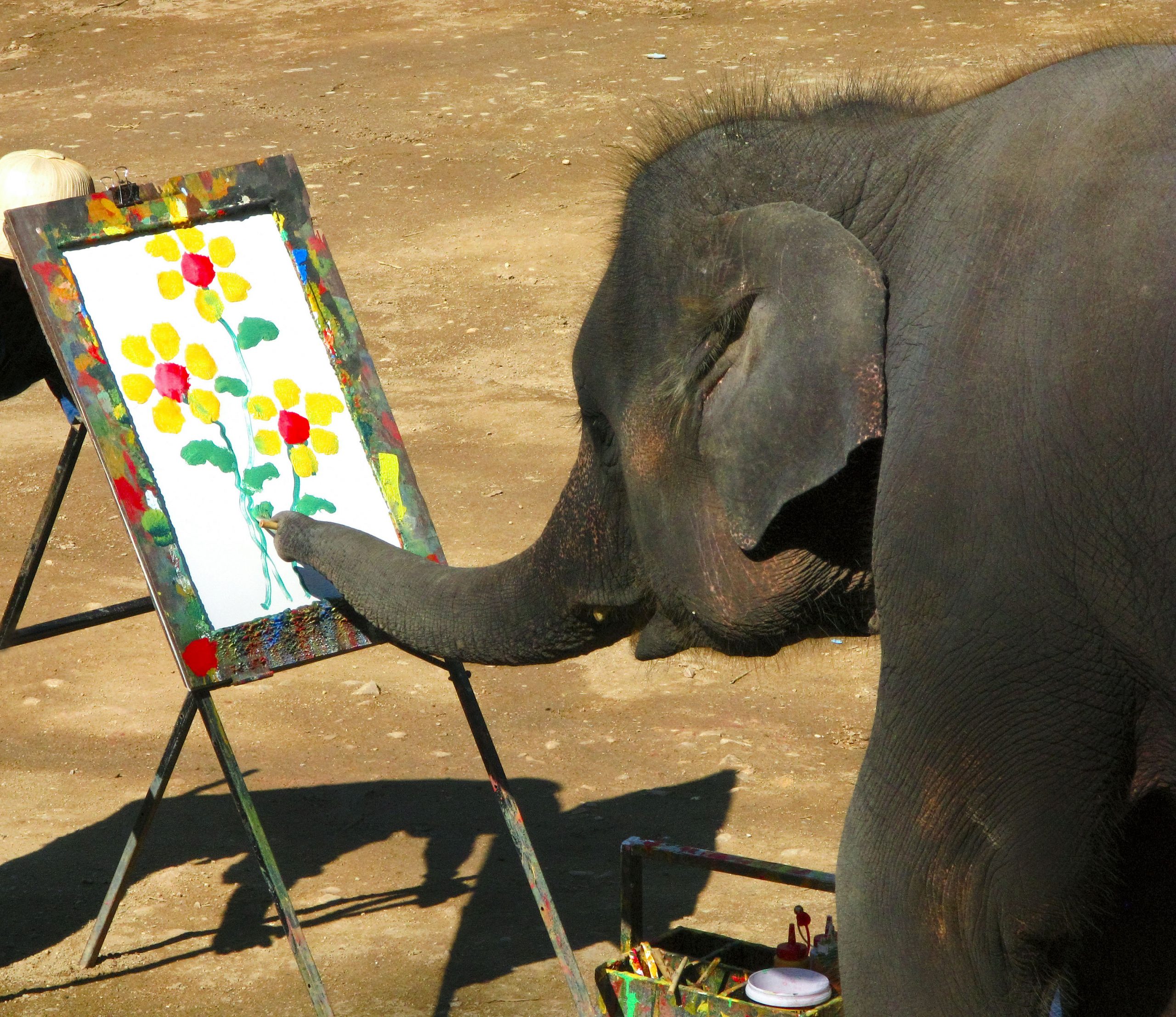 Anthropomorphism is everywhere. When we’re young we watch Disney movies featuring talking lions and helpful woodland creatures. We grow up and polar bears sell us coca-cola and geckos sell us insurance. We become so used to seeing fictional animals behave in human ways that we stop questioning that behavior in live animals. While seeing animals perform and do tricks in cartoons is cute, in real life, in real life such actions indicate a much darker reality. These ten examples of animals exhibiting seemingly innocent behaviors show how insidious and harmful animal exploitation really is.

In the video above, an elephant renders a relatively complex landscape scene in a short amount of time. Miraculous right? While the skill demonstrated by the elephant is something to behold, this species is not motivated by any instinctual desire to become a Pachyderm Picasso. On the contrary, these elephants are taken from their mothers at a young age and forced to undergo abusive training. Although the elephant shown in the video seemingly holds the paintbrush with precision, this movement is very unnatural for elephants. The trainer jams the wooden handle into the elephant’s extremely sensitive trunk and then uses bullhooks and nails to coerce the elephant into making the proper motion and beating the creature into obedience. At each subsequent painting performance, these trainers will stand beside the elephant with a nail pressed into the soft part of the elephant’s ear to assure the unwilling performer complies. Because elephants are known for being highly intelligent animals, people seem to readily believe that they could take up painting of their own volition. In the comment sections of videos capturing painting elephants, people often express their awe, even envy, at the apparent “skill” of these animals. One person even claimed one could see “how proud” the elephant was, further anthropomorphizing these animals and attributing intrinsic motivations that simply are not there.

The video above shows Whiplash the capuchin monkey dressed in a cowboy outfit and riding atop a border collie. While the crowd cheers, Whiplash’s frail frame jerks around at each turn the border collie makes as if testing him to live up to his namesake. The spectacle is disturbing. Although Whiplash’s trainer claims he loves to ride the dog, the Humane Society of the United States released an entire fact sheet dedicated to outlining the cruel, unethical reality of these “cowboy monkey” acts. Like elephants, monkeys are known for being intelligent and because they are so similar to humans, attributing human characteristics and cognition to them is easy. However, capuchins belong in the wild where they enjoy climbing trees and socializing with other capuchins – not performing for loud crowds and traveling to venues in cramped cages.

A common attraction at SeaWorld and some aquariums are dolphin performances. In such acts, the dolphins perform tricks with swimmers that often involve lifting the swimmers into the air with their snouts and pulling them around on their backs. Supporting the full bodyweight of these swimmers can seriously injure these poor creatures. Not only that but to learn these routines, dolphins are often deprived of food to coerce them into learning tricks and complying with trainers. Being confined within such small enclosures has made dolphins sick and even suicidal. While audiences may be captivated while watching these performances the dolphins are suffering.

Small circuses like the one shown above harbor a slew of animal rights abuses. The footage shows monkeys dressed in costumes performing acts from riding bicycles to playing basketball – often while hobbling around on chains. In some clips, the monkeys clearly pull on their leashes to avoid being choked by the trainer’s pull. In another clip, a monkey chews his foot, signifying distress. Animals trained to perform these tasks are subject to abuse and neglect. They are beaten into obedience so they learn the performances and then they are carted around in cages to be ogled at by crowds. These monkeys deserve the freedom to live in the wild, not enchained in a circus.

5. Circus Animals During the Off-Season

While the previous video shows the mistreatment of circus animals during performances, this video exhibits what circus animals endure during the off-season. The animals in this circus were confined to dark, tiny, concrete enclosures. During the first 16 hour observation, the zebra, camel, and ankole were never let out of the barn to get fresh air and exercise. Some of the animals were tethered for 24 hours. Some ponies, horses, and donkeys were tethered for 15 hours without water. In one 40 hour observation period, these animals were never let out of the barn. On one occasion, one of the camels was taunted and spit on by a worker. Taunting from the workers is not the only form of aggression these animals endure. As the horses, ponies, and donkeys become overwhelmed by the crowded environment, they lash out at each other. While the cruelty is easily witnessed during actual circus performances, it is also important to consider the cruelty behind the scenes. These animals never get a break from the abuse.

Dogs are often anthropomorphized, whether that’s people innocently calling their dog their ‘child’ or ascribing human emotions to their dog’s facial expressions. While these examples are relatively harmless, there is a darker side to dog anthropomorphism. The Dodo created the video above to shed light on a disturbing viral trend. In the video, a small, fluffy dog wearing children’s clothing walks on two legs for extended periods of time. Although many people found the video to be cute, many were quick to call out the dark reality of such behavior. Obviously, walking like this is not natural for dogs, and to be trained to do something so abnormal, dogs are often abused and forced to walk this way. Even though some might find joy in watching something like this, the truth is, animals are not meant to please us. Training dogs to walk on their hind legs is completely unnecessary and the abuse that goes into that training is cruel and disgusting.

Although the orangutan and tigers in this video appear to be healthy and acting tenderly towards each other, they were likely taken captive and trained to obey humans. These animals are from T.I.G.E.R.S (Myrtle Beach Safari), which is notorious for exploiting tigers. While T.I.G.E.R.S claims to have conservationist ideals, these tigers are housed in small cages and abusively trained in order to perform for humans so the owners can make a profit. Not only that, but once people realize that endangered animal exploitation can make money, others will try out the unethical and cruel business for themselves.

When this video went viral, many marveled at how cute this unique animal is. With her big brown eyes and tiny outstretched hands, it’s easy to see why people were captivated by this slow loris. However, many animal experts were quick to explain that this posture is actually a defensive move indicating stress. The elbows of the slow loris contain a venomous gland, so when these animals stretch up their arms and expose their elbows, this means they are fearful. On a larger scale, one study found that viral videos like this one actually perpetuate the wildlife trade, which is incredibly harmful and unethical.

Whether it’s for sport or tourism, dog sledding is an unethical practice. Often, supporters of dog sledding try to justify the industry by claiming that these dogs are bred to endure such cold temperatures and long runs. However, the breeding of these dogs is also an issue of commodification. Animals are not experiments to breed to obtain certain characteristics that are desirable to humans. In fact, many purebred dogs are very unhealthy. Even if this breed of dog loves exercise and can withstand cold temperatures, they do not consent to carting people around sleds over and over again. Similarly, in competitive sledding, the human racers are motivated by money which often leads to unethical treatment of their dogs.

Although many of the dogs in this video are likely treated well, dog grooming competitions reinforce the idea that animals are commodities to make humans happy. The dye may be non-toxic and the dogs might not be treated poorly as many of the unfortunate animals mentioned previously, but the arduous process of multiple dyes and cuts is not in the animal’s best interest. Sitting still for such an intense process of applying and washing dyes and even gluing objects into the fur can be highly stressful for the dog. Likewise, the dyes can alter the dog’s scent altering the way animals interact with them, which can cause distress.

Unlike other forms of exploitation such as dog fighting, these examples often have a cute facade. This deception is intentional. Many people are captivated by animals and their beauty so they believe certain performances or behaviors are ways to show their appreciation. However, supporting these industries is actually supporting animal abuse. Be skeptical of industries, acts, and viral videos that involve animals behaving in idealistic or humanlike ways. Animals are not commodities for humans to project their anthropomorphic ideals onto. If you truly love animals, don’t pay for their exploitation and don’t share these kinds of videos. If someone you know shares one, they might not have known that an animal was exploited and didn’t perform the behavior naturally. Politely let them know and report the video for animal abuse.