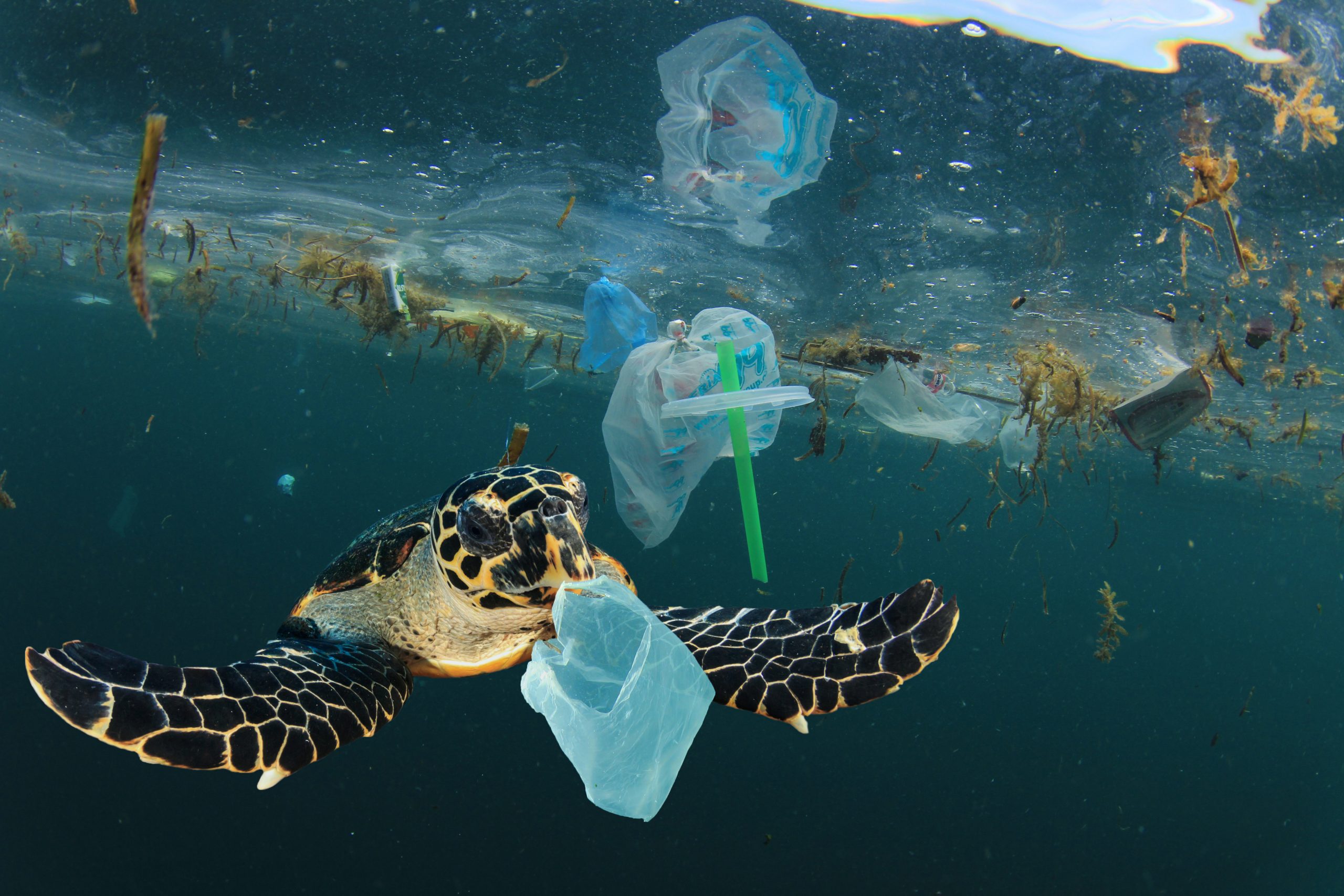 Single-use plastics are something that almost everyone comes in contact with on a daily basis. They are convenient, long-lasting, and so ubiquitous that its difficult to find any product that doesn’t at least use some plastic packing. Unfortunately, plastic’s durability is one of the traits that makes it simultaneously so popular and so dangerous. Only around twelve percent of plastic objects get recycled, which is especially worrisome considering the fact that plastic takes hundreds of years to decompose. Even then, plastic only becomes microplastic, which is still harmful to people, animals, and the environment.

Plastic pollution is a huge issue that we are facing right now. Our oceans are so full plastic that there is a “huge, swirling pile of trash” in the ocean called the Great Pacific Garbage Patch. The area is around 1.6 million kilometers large, which is about three times the size of France. Luckily, conservation groups have been working on cleaning up the patch, but it is a big undertaking and so many marine animals are still negatively affected by plastic pollution on a day-to-day basis. These are ten examples of animals that are caused tremendous pain and suffering due to plastic. While some of these hard to watch, it’s important to see the effects of human actions on these poor animals and work towards making positive for them.

1. Sea Turtle with Straw up its Nostril

Could you imagine having something stuck up your nose for weeks, months, or maybe even years? It would surely be an unpleasant experience that causes a great amount of pain and discomfort. Unfortunately, this is a reality for some sea turtles. This video is one of the most-watched examples of the harm that plastic pollution can cause in our oceans. Christine Figgener, a biologist, was leading a research team in Costa Rica when they found a sea turtle that had something lodged in his nostril. At first, they assumed that he had a parasitic worm. After observation, the team realized that it was a 10-12 centimeter plastic straw that he likely ingested and then regurgitated. Luckily, even though the procedure was very painful, the turtle was able to swim away with ease. It is awful that this sea turtle, and probably many more, have to live in pain because of the careless use of plastic straws. No one deserves to suffer like that.

Beluga whales are marine animals that are known for their bulbous foreheads and sweet faces. They are very sociable and are known as the “canaries of the sea” because of their variety of chirps and whistles. In 2019, Ocean Wise partnered with the Department of Fisheries and Oceans Canada as well as a northwest community to conduct a study on microplastics in Beluga whales. They found that all seven whales tested had microplastics in them. These results are significant not only because all of the whales were affected, but also because these whales were located in the remote arctic. Researcher, Rhiannon Moore highlighted the severity of our plastic problem by explaining that, “We are contaminating many different ecosystems, even remote, pristine ecosystems.” Because of the ubiquity and variety of the plastics, it is difficult to know the exact cause of them being inside the whales; however, researchers believe that the fish that the whales eat may be contaminated and they also may consume the plastics directly.  You may be wondering, what could be so bad about a tiny particle of plastic? Well, microplastics actually cause macro problems. They can block the digestive tract, leading to starvation; cause neurological and physical damage; threaten biodiversity; which all can cause death and ultimately, risk extinction.

In 2018, rescuers off the southern coast of Thailand spent five days in the water with a stranded Pilot whale. The whale was dying because it had consumed so much plastic that it could no longer digest food. While they wanted to save the whale, the damage was already done. On the last day, the whale began choking and eventually passed away. The autopsy revealed that the whale had eighty plastic bags inside of it. Not only does block passages within the whale, but it also can have poisonous effects. Unfortunately, this is not an isolated occurrence. Whales around the world have suffered the same fate for a while. Seven months ago, a whale with 220 pounds of trash inside its stomach washed up in Scotland; in March of 2019, a whale washed up in the Philippines with forty kilos of plastic bags inside of it. Whales will continue to suffer this tragic fate unless radical action is taken to both reduce the amount of plastic we use and also to clean up the plastic that is already polluting the ocean.

Ocean Conservation Namibia is a rescue team led by conservationist, Naude Dreyer. The group catches seals that are stuck in nets, fishing lines, plastic, and other harmful waste to help them get untangled. In this video, a seal has a woven plastic bag tight around its neck. These bags have no stretch, so as the seals grow and the bag tightens, they will starve or suffocate, and eventually die. This holds true for so many of the other waste items that the team finds seals stuck in. It’s so heartbreaking that when these poor animals find human trash somewhere, all they want to do is play, but they end up entangled and in pain.

While diving in Phuket with her friends, Nat Senmuang noticed that there was a fish stuck inside the plastic bag. As a result, it was struggling to move and survive. Senmuang says, that she had already seen so many marine animals killed by plastic pollution while diving and the pollution had only gotten worse with the increase in tourists. She knew she had to do something, so she helped free this poor fish that otherwise would have eventually died of suffocation or starvation.

One of the components of some types of sea turtles’ diet includes moon jellyfish. Unfortunately, these ethereal creatures have a deadly twin: plastic bags. When floating in the water, plastic bags look very similar to the natural prey of certain turtles. Thus, many turtles mistake plastic bags for food, which is extremely dangerous due to the toxicity of plastic. The bags also block turtles’ stomachs, preventing them from eating, and thus, causing starvation. Our plastic obsession is interfering with these poor animals’ lives in so many ways. We’ve disrupted the ocean ecosystem so much so that even eating poses a grave threat to animals like turtles.

7.  Dolphin Dead Due to Plastic Would Washes Up

On an Indonesian beach earlier in the year, locals spotted a dead dolphin in the water and dragged it to shore. The dolphin was covered in wounds, which seem to be from plastic and other human wastes. In the video, one can see how polluted the beaches are, so it’s easy to imagine the state of the ocean. Because of human action, dolphins are forced to live in a sea, brimming with plastic waste. They must swim through debris that can puncture, scratch, and cause permanent damage to them. Through no fault of their own, dolphins’ home has become a dangerous, polluted place.

Like the first turtle video, this turtle has a piece of plastic waste stuck up its nostril. This time, the culprit is a plastic fork. After finding this suffering olive ridley sea turtle, Nathan J. Robinson and Las Baulas field team helped remove the fork from its nostril. Despite the pain that the turtle had to endure, it was able to return to the ocean, finally able to breathe freely. While we’re happy to know that this turtle was eventually helped so that it no longer had to live in such discomfort, it’s awful that this ever happened in the first place. So many turtles probably go unnoticed and thus, unaided. They have to live the majority of their lives in great suffering at the hands human beings.

Dr. Martin Haulena rescues sea lions who are entangled in fishing lines, nets, garbage, and other plastic waste. These poor animals suffer from cuts, scarring, and suffocation. Not only does plastic waste cause immense pain for these sea lions, but, without the help fro Dr. Haulena, many would probably die prematurely.

Another one of the seals that Ocean Conservation Namibia had some kind of plastic sheet or ring around its neck. If the team of rescuers hadn’t noticed the poor seal, it wouldn’t be long before the plastic started cutting into her neck. Many animals who are found with plastic around their necks have split skin, with a deep, bloody gash caused by the plastic.

Many of these videos do bring us some degree of joy because many of them have to with rescues. It’s inspiring to see how many people are and are involved in the conservation of marine animals around the world. However, the fact that these types of rescues need to happen so often is extremely sad. So many animals have to suffer because humans produce an excessive amount of plastic waste. Our addiction to plastic is destroying ecosystems and poisoning animals all over the world.

One of the best things you can do to reduce the plastic pollution that is threatening the world’s oceans is to lessen your use of plastic items–especially those that are single-use. There are so many simple actions and switches that can help cut plastic out of our lives including, making your own cosmetics, shampoo, toothpaste, soap, household cleaners, using mason jars, reusable bags/bottles/straws, bringing reusable grocery bags when you go shopping, storing food in reusable wraps or containers, and avoiding microbeads! You’ll save money, the environment, and animals. It’s really important to be a conscious consumer. No one is perfect, but if you shop consciously, you can keep making decisions that are more sustainable and ethical. Show companies that sustainability is important and don’t support companies that engage in non-eco-friendly practices.

Another great way to help the ocean and its creatures is volunteering or cleaning up beaches in your free time! There’s always trash on the beach that can get carried into the ocean and harm an animal, so try to pick up any trash before that happens!

Finally, make sure to learn about what can be recycled and where. There are a lot of unknown rules and specificities that we can all improve upon and help others work on too! There are probably many items you didn’t know you could reuse over and over again and those that you can recycle but probably didn’t think you could! Even if you are left with no option, you can repurpose plastic in creative ways.

Sign this petition to Join the Fight Against Plastic Pollution!