By Aquafabulous! by Rebecca Coleman 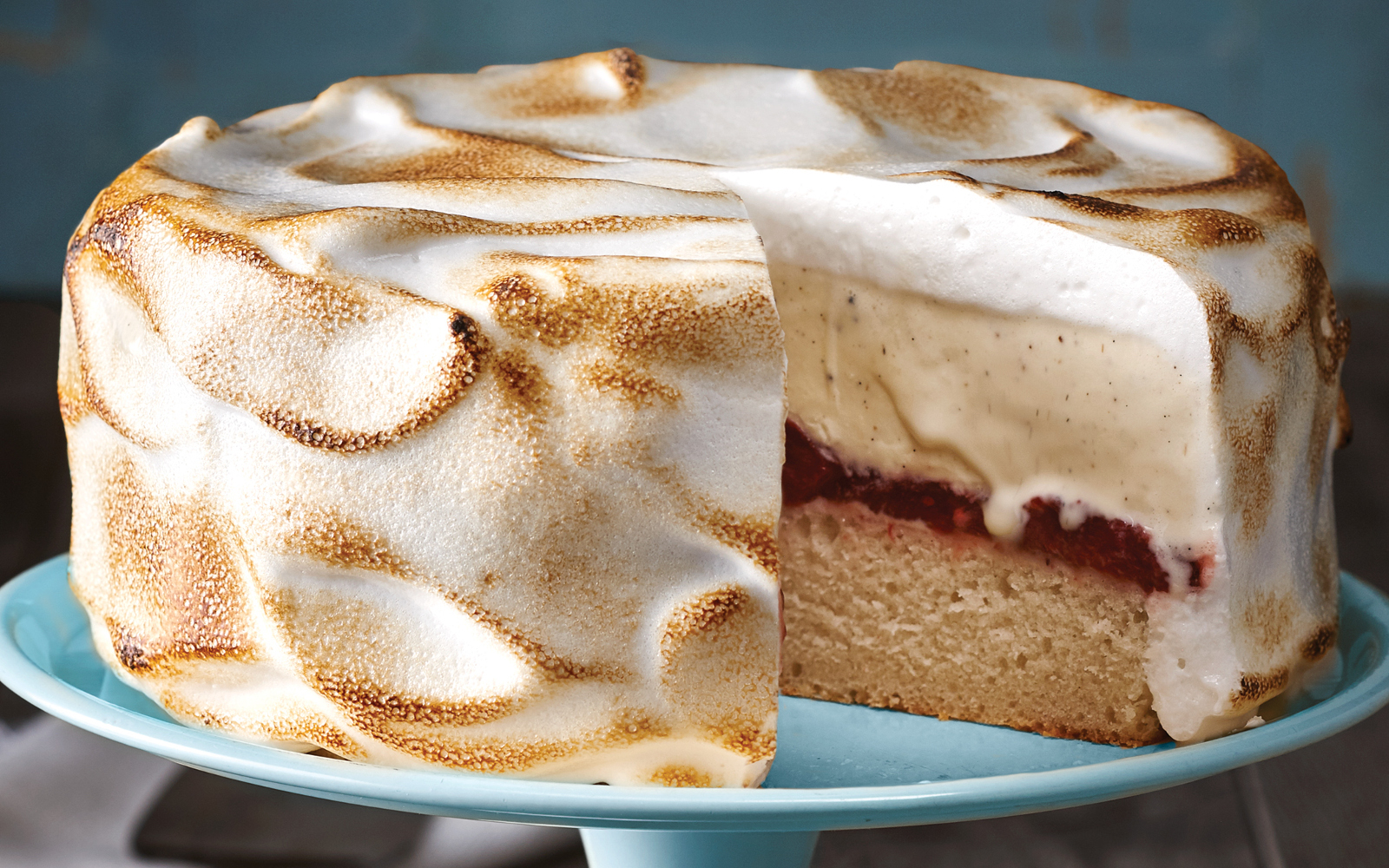 Baked Alaska is an old-school fancy dessert. Frozen on the inside, then covered in a layer of meringue, it’s sort of a culinary miracle — and it used to be made in the oven! In this egg-free version, a torch is used to brown the meringue, but the final effect is still pretty spectacular. Serve this at your next big family get-together or for a special occasion, like a birthday.   Image credit: Colin Erricson

For the Vanilla Ice Cream:

To Make the Cake:

To Make the Meringue:

- There are a few different ways to get vanilla seeds. First off, you can buy whole vanilla beans at gourmet food stores. Carefully slice the vanilla bean open with the tip of a sharp paring knife, then scrape out the small seeds from the inside. You can also buy vanilla bean paste. This is vanilla seeds that have been preserved, usually in bourbon, and it has a gooey, paste-like texture. Finally, you can also buy dry vanilla seeds in a small jar — they aren’t cheap, but a little goes a long way. This Baked Alaska assembly works best if you pour the ice cream mixture straight into the springform pan rather than freezing it in an ice cream maker. You can prepare it, pour it into the pan and freeze it for up to 1 week before assembling the dessert. If you need to use the pan for baking the cake, simply unmold the ice cream, wrap it well with plastic and freeze it in an airtight container until you’re ready to use it. Then put it back in the pan when it’s time to layer on the jam and cake. - To cut: Fill a deep container with hot water. Dip the blade of your knife in hot water, then wipe it dry before each slice. - You can make this ahead. Complete Step 8. Wrap tightly and store in the freezer for up to 3 months. Remove from the freezer and transfer to the fridge about 1 hour before serving. Proceed with making the meringue. - Store leftover ice cream in the freezer for up to 1 month.

Total Calories: 2670 | Total Carbs: 379 g | Total Fat: 117 g | Total Protein: 11 g | Total Sodium: 729 g | Total Sugar: 299 g Note: The information shown is based on available ingredients and preparation. It should not be considered a substitute for a professional nutritionist’s advice.

Rebecca Coleman is a passionate foodie, cookbook author, and food blogger at Cooking by Laptop. In her cookbook, Aquafabulous!, she shares more than 100 recipes that incorporate this exciting new ingredient and the beans used to make it. In addition, she walks you through her many tips and techniques for sweet and savory cooking and baking.