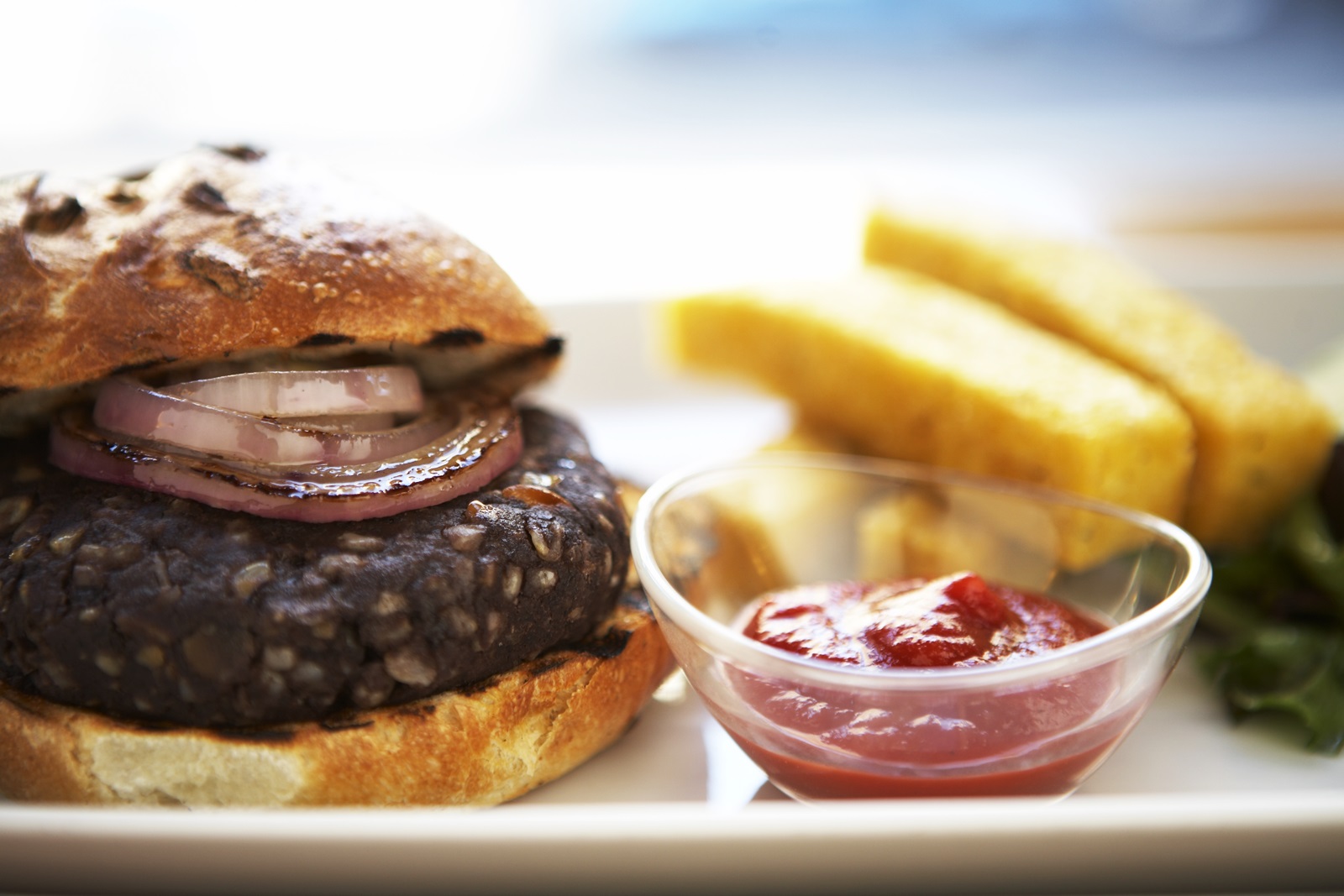 When I became vegan, I had to learn to cook because there were no vegan eateries in my neighborhood. Luckily for me, I only had to cross the bridge into Manhattan where there were over a dozen vegan restaurants and other vegan-friendly places. That was almost 7 years ago and now New York City has more vegan restaurants than anywhere else in the country, over 140! New York was even named the “Most Vegan-Friendly City in America.” Unfortunately for me, I moved out of the city a few years ago and missed the explosion of vegan restaurants that happened soon after. While I have many, many delicious vegan memories, I turned to the people – on social media – to help me write this list. Many people offered suggestions and opinions about who makes the best vegan burgers in New York, with most being in the city. It was very enlightening and hunger-inducing!

Here are the 10 Must-Try Vegan Burgers in New York : 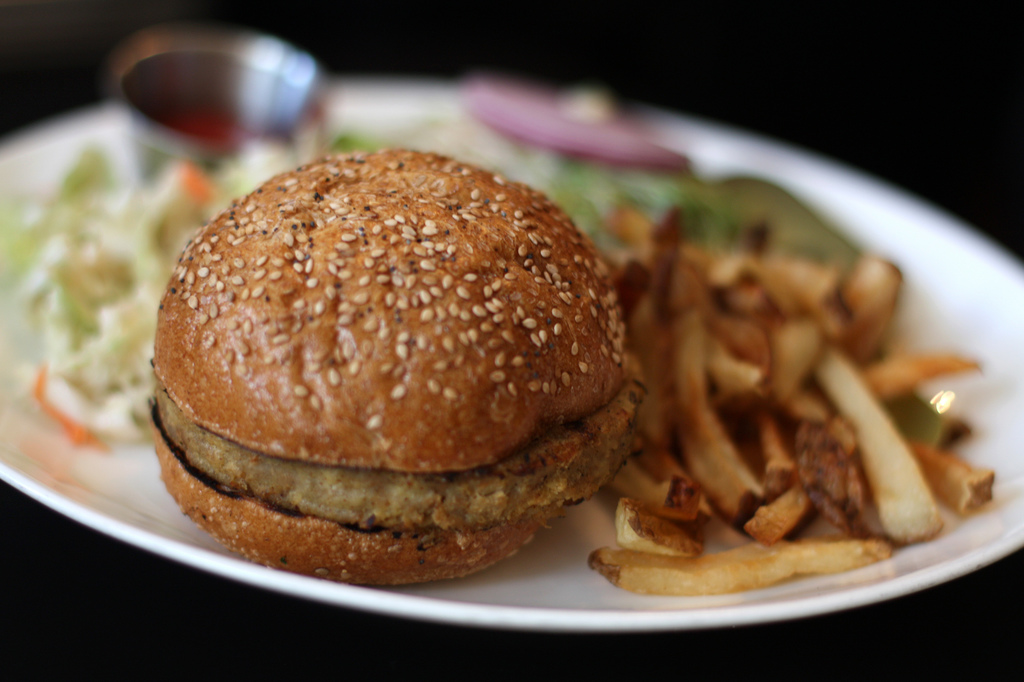 I can’t even begin to tell you how much I miss Candle Café on the Upper East Side. It was probably my most frequented vegan eatery in NYC so I remember how delicious their BBQ Seitan Burger was. This vegan burger has a seitan patty served on a seeded bun with fried potatoes, lettuce, tomato, onion and pickles for toppings. It comes with a mesclun salad drizzled with balsamic vinegar.

2. The Skyscraper at Blossom Du Jour 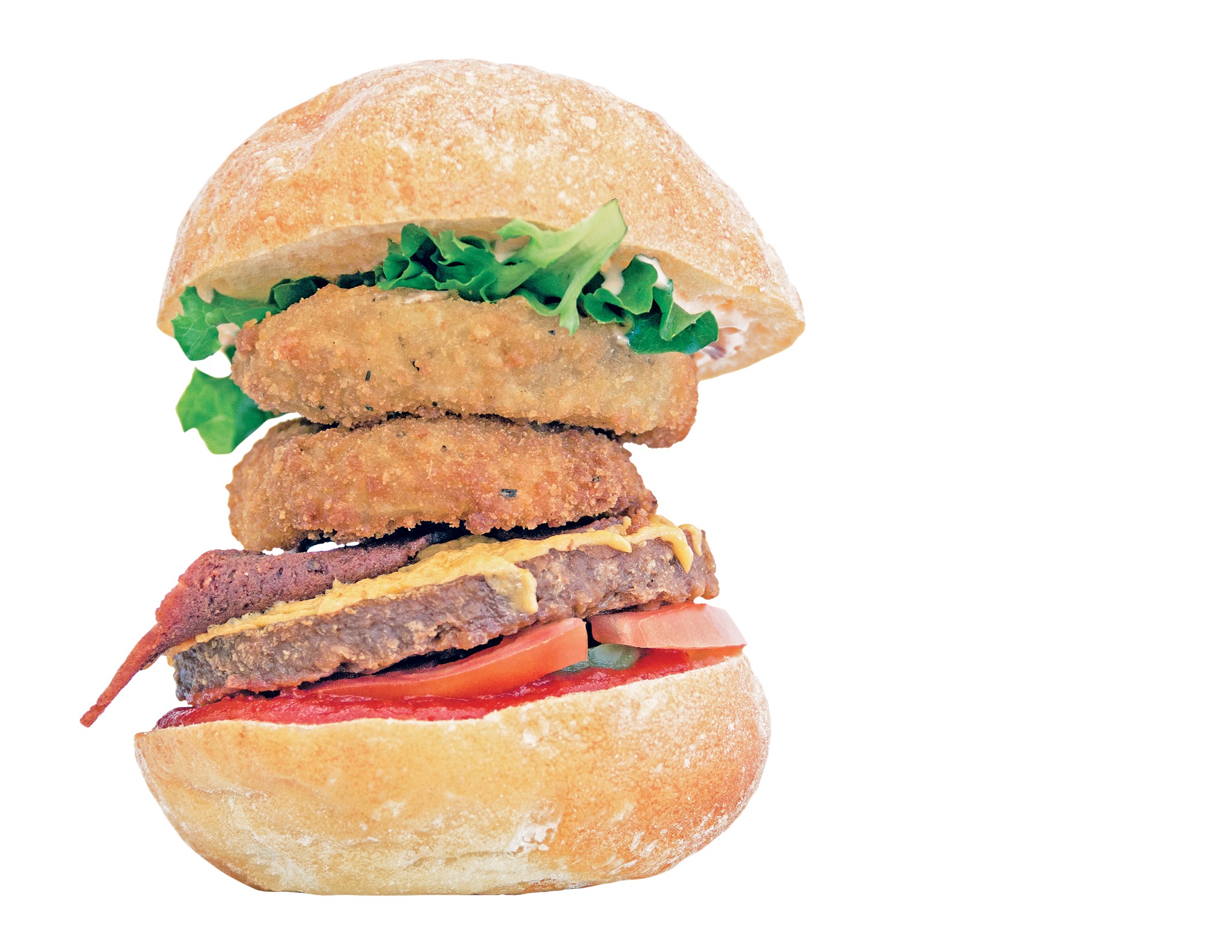 Visiting Blossom Du Jour in Chelsea is in the top ten of my bucket list so it’s only fair their burger makes my top ten list of burgers. The Skyscraper is a vegan burger with vegan bacon, vegan cheese, onion rings, lettuce, tomato, pickles and their special sauce. Yes, please! 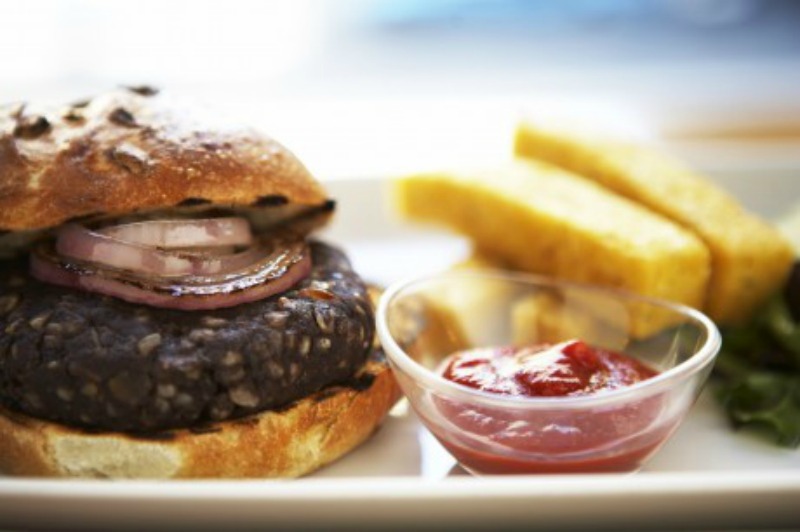 My husband and I spent our 2nd wedding anniversary at Candle 79. It was so romantic and Joy, the owner, came to our table to personally congratulate us and gave us a complimentary dessert. Besides all their elegant dishes, Candle 79 has an amazing burger. The Black Bean-Pumpkin Seed Burger comes with polenta fries and is even available gluten-free. 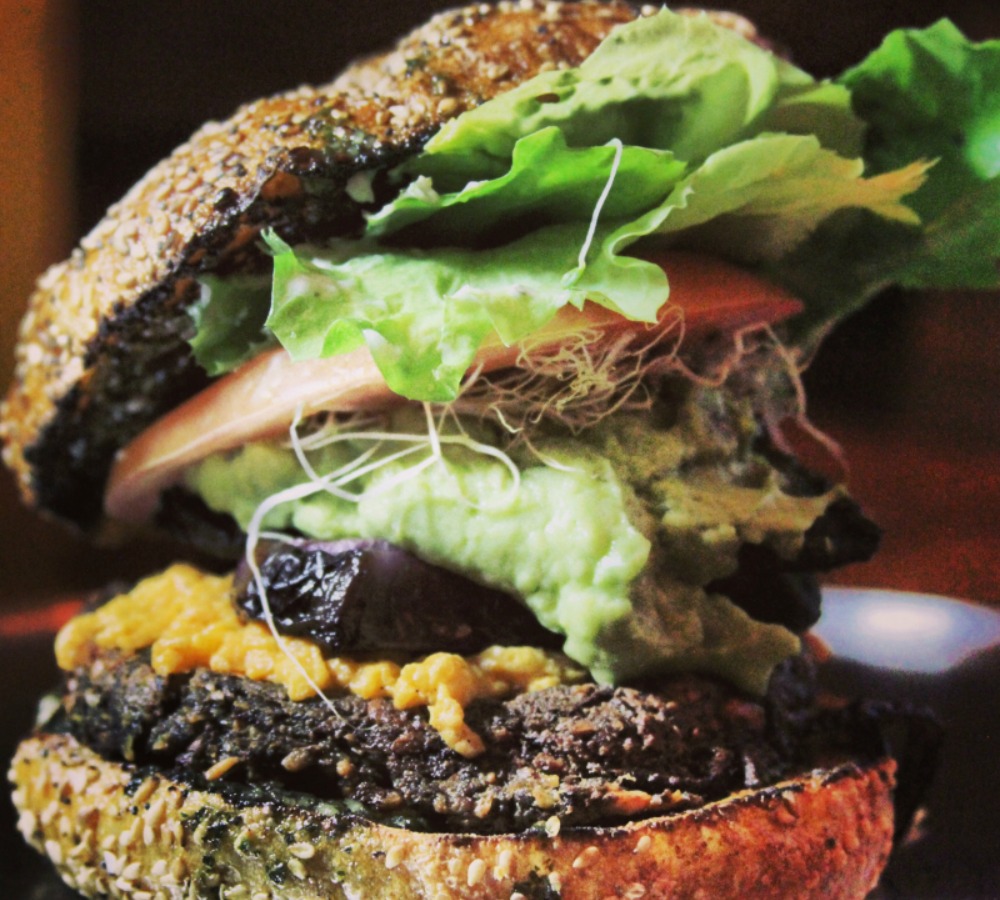 Organic Grill in the East Village has been rated several times as having the best veggie/vegan burger. Which burger is good enough to get that kind of love? The Green Machine Burger! It’s their signature roasted Portobello mushroom patty topped with their homemade organic pesto served with meshed avocado, vegan cheese, green peppers, sprouts and caramelized onions. It also comes with home fries, cole slaw and a pickle. Sounds like a clear winner to me!

5. The Bamburger at Red Bamboo 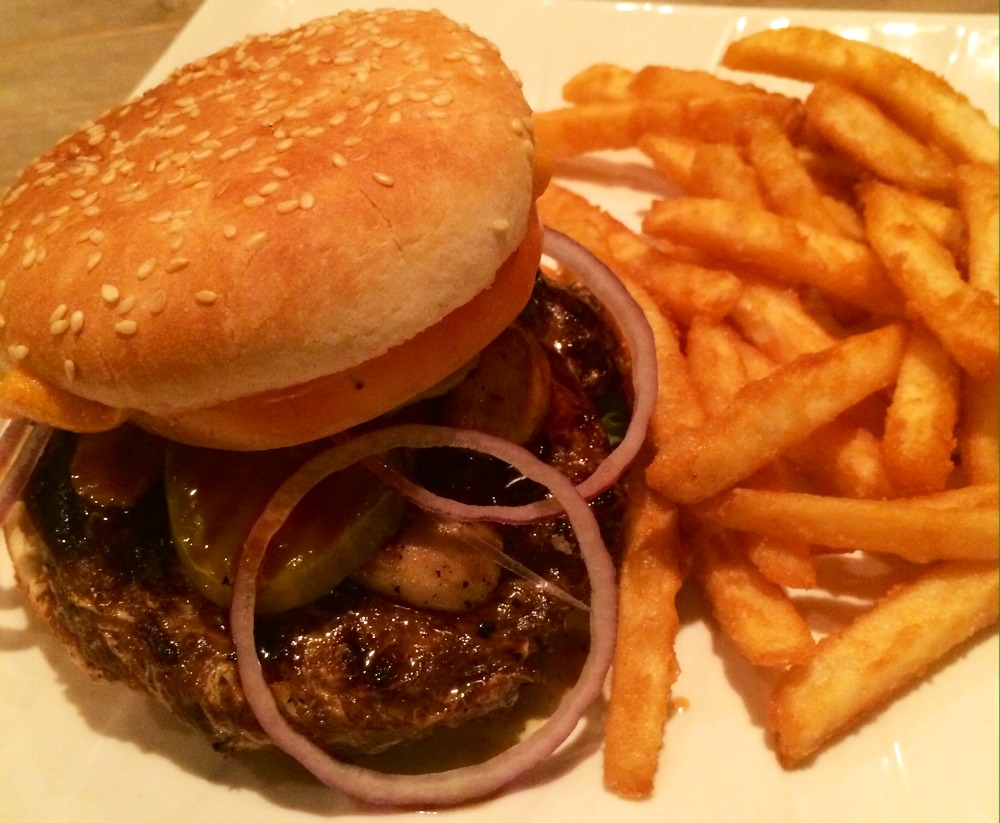 Red Bamboo in Greenwich Village is another place I frequented. This is where I could get all my old favorite foods in vegan versions. It’s no surprise they were recently named Reader’s Choice for Best Vegetarian Restaurant by the Village Voice. Their most popular burger is the Bamburger – a marinated and grilled veg steak burger. It comes topped with lettuce, tomato, pickles, caramelized red onions and vegan mayo on a sesame seed bun. You can add vegan cheddar cheese, organic tempeh bacon or fries if you want to. I want to.

6. The Soy Bacon Cheeseburger at Blossom 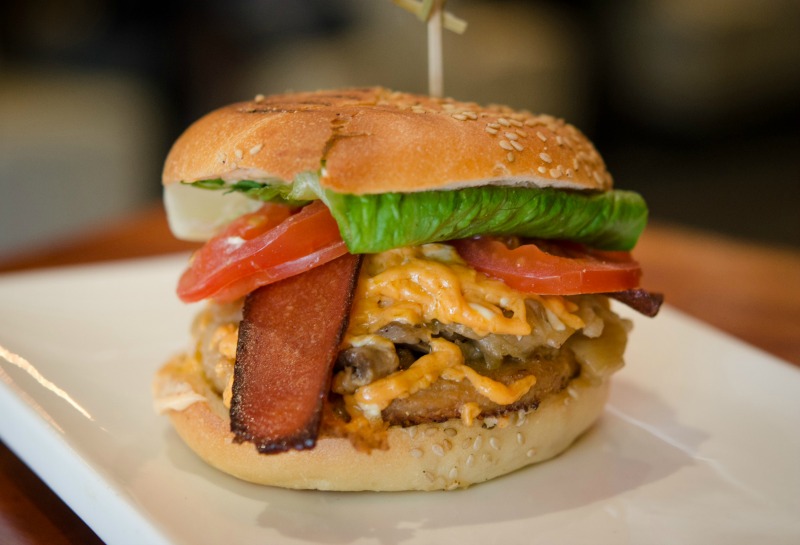 Before I was vegan, my favorite kind of burger was a bacon cheeseburger. Blossom  located in Chelsea and on Carmine Street has just the thing to satisfy that craving. Their Soy Bacon Cheeseburger is a soy patty topped sky-high with vegan tapioca cheddar, tomato, lettuce, grilled mushrooms, soy bacon and chipotle aioli. It is served with your choice of hand-cut fries, hand-cut sweet potato fries or a salad.

7. The Gouchujang Burger at Cinnamon Snail 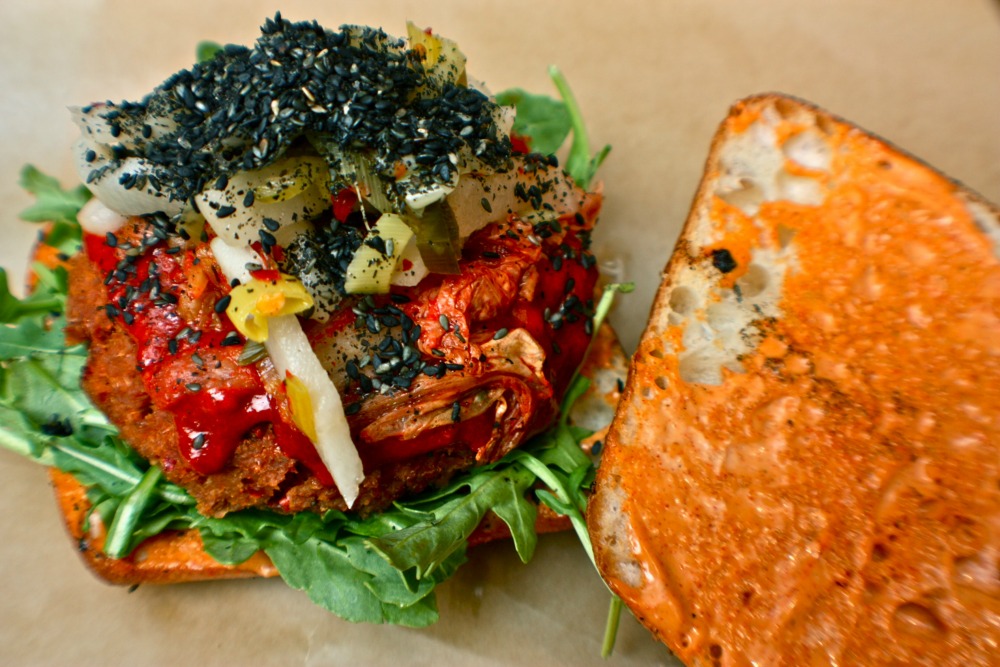 The Cinnamon Snail Food Truck was voted Best Food Truck in NYC and has lines that go around the block. One day I’m going to be standing on that line and when I get to the front of the Cinnamon Snail truck, I may just order the Gouchujang Burger Deluxe. It has Korean chili paste, sauteed kimchi, arugula, pickled red onions, black sesame gomasio and sriracha mayo all on herb-grilled focaccia. Then I’ll probably get back in line to get another one!

8. The House Made Shack Veggie Burger at Pickle Shack 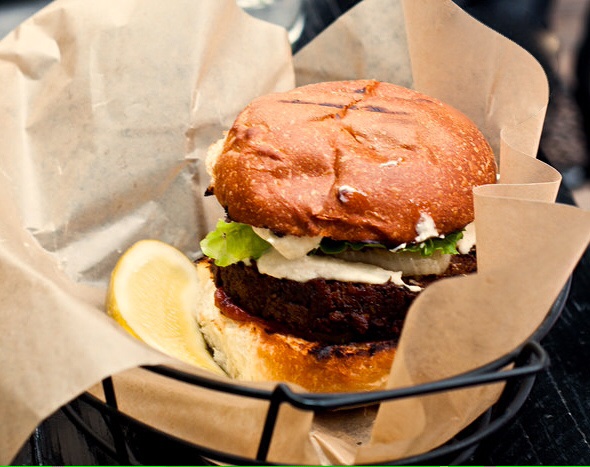 The Pickle Shack in Brooklyn is a vegetarian sandwich shop that has gotten rave reviews for their veggie-friendly menu. One of the items on that menu is the House-Made Shack Veggie Burger. It’s a grilled vegetable and mushroom burger with bread and butter pickles (of course), aioli and ketchup on a potato roll. You can add cashew cheese for an extra charge. I’ll have mine with extra pickles, please!

9. The Portabella and Hemp Seed Burger at Pure Food and Wine 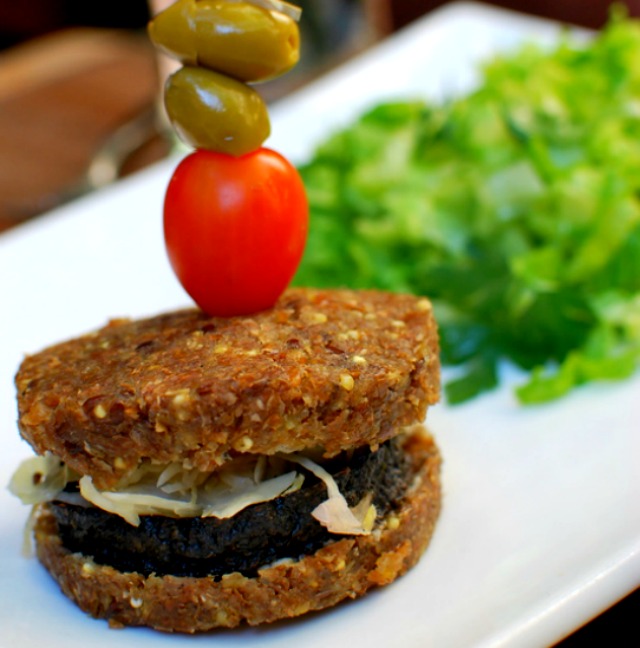 If you are looking for an amazing raw experience, go no further than Pure Food and Wine near Union Square. One of the most elite in NY, Pure Food and Wine is a raw, organic restaurant, owned by  Sarma Melngailis, who also owns and operates  One Lucky Duck Juice & Takeaway. Pure Food and Wine offers some incredible raw, vegan and organic meals, that even includes a variety of burgers. One burger on their lunch menu (not the dinner menu), called the Portabella and Hemp Seed Burger, is served on sprouted manna bread (which is not 100 percent raw) with caraway kraut, lapsang souchong tea smoked cashew cheese, pickled pink onions and their house-made mustard. Even better, all of their recipes are made with gluten-free ingredients for those sensitive to gluten and they use no tofu, tempeh, or seitan for those who choose not to eat processed soy products. Having one of these burgers would make me one lucky duck! 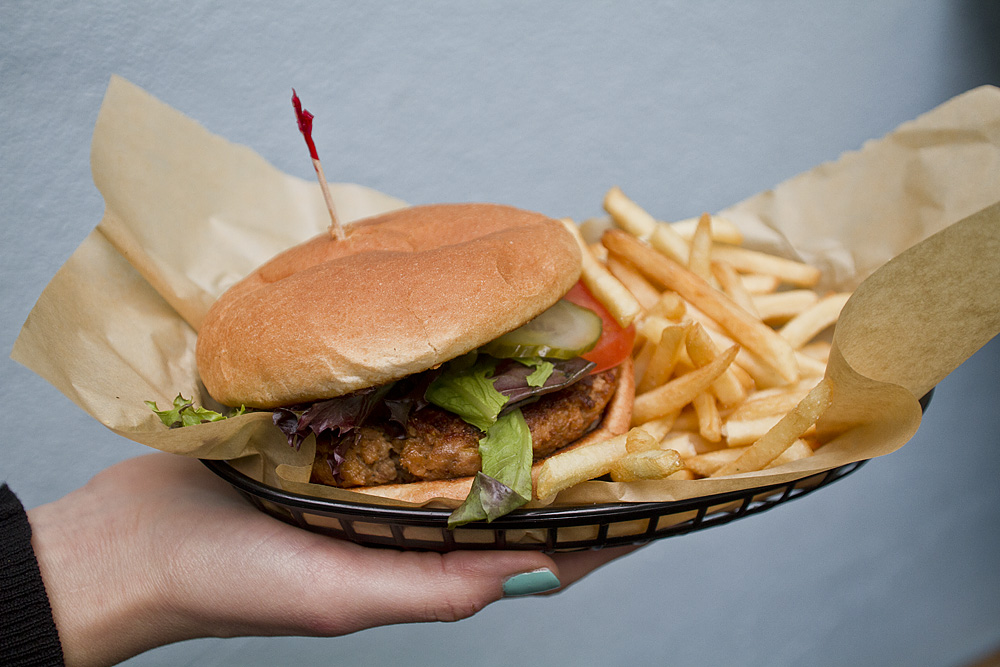 CHAMPS Family Bakery is a 100-percent vegan diner and bakery in Williamsburg, Brooklyn. They serve breakfast dishes, sandwiches, salads, burgers, and desserts. Everything on the menu sounds amazing!! Their “Build-a-Burger” lets you create your own burger masterpiece. First, choose from one of their three house-made patties: the “Bomber” which is house-made tempeh and seitan, the “Chik Faux-Le” which is vegan chik’n and pickles, or the “Sweet &Smokey” which is made up of chipotle black beans, corn, red bell peppers and mushrooms. All the patties come with lettuce, tomato and pickles but then you can choose additional fixings such as grilled onions and mushrooms, tempeh bacon, avocado and sprouts, vegan cheese, and their award-winning chili. You can even choose to make it a double-decker with an extra patty and bun or make it a patty melt with grilled onions and cheese on sourdough.

I am so hungry and homesick now, it’s just not funny. I’m sure everyone has their own ideas of what the top NYC vegan burgers are. We would love to hear which burger you love most. Let us know in the comments section.