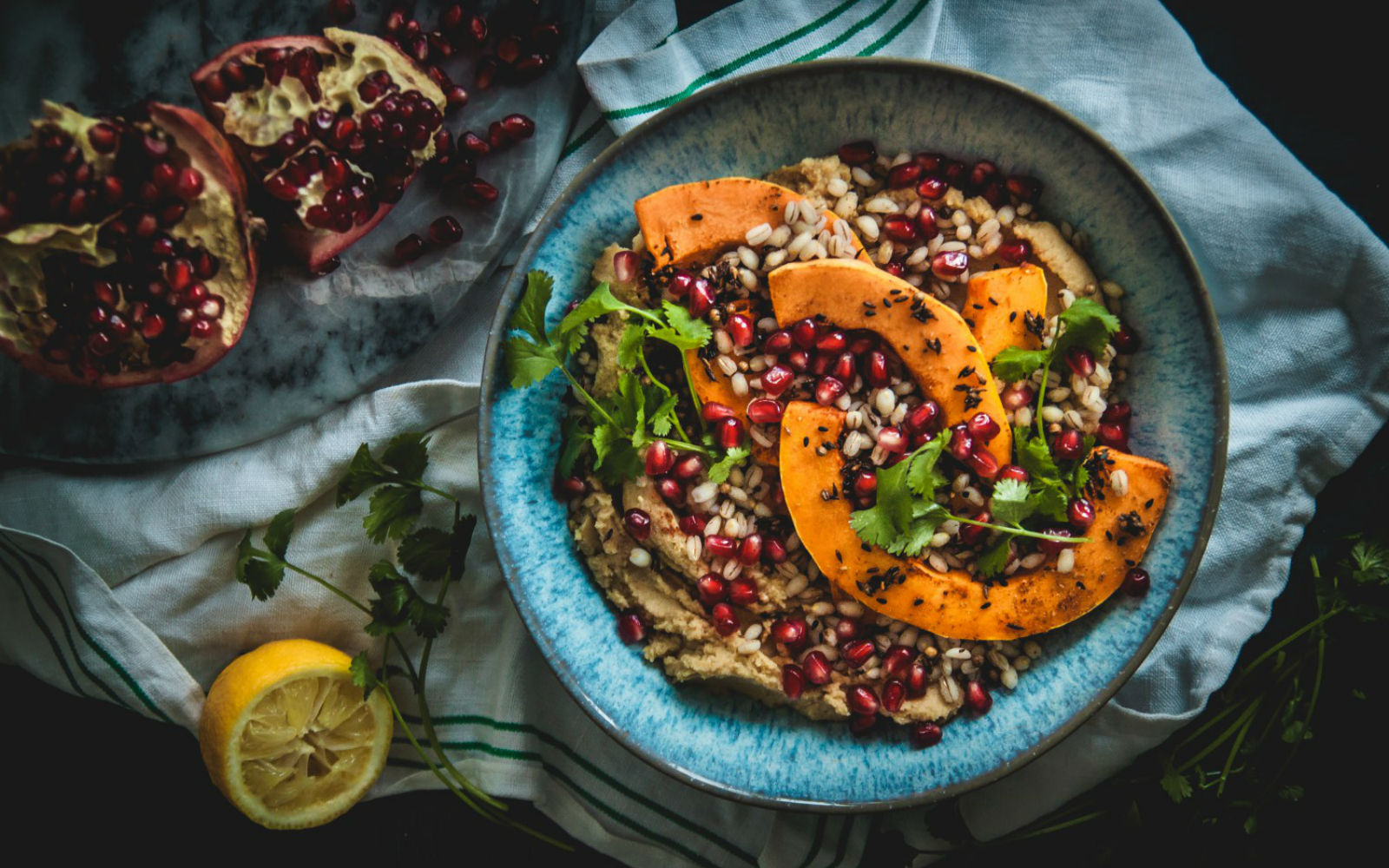 If barley is a grain that you haven’t made a regular addition to your meals, you’re missing out! Its slight nutty flavor and hearty texture make it a filling and delicious ingredient that will bulk up any meal you want to make. Since it has a mild flavor on its own, you can pair it with so many different other ingredients. Get started with these barley recipes from our Food Monster App! 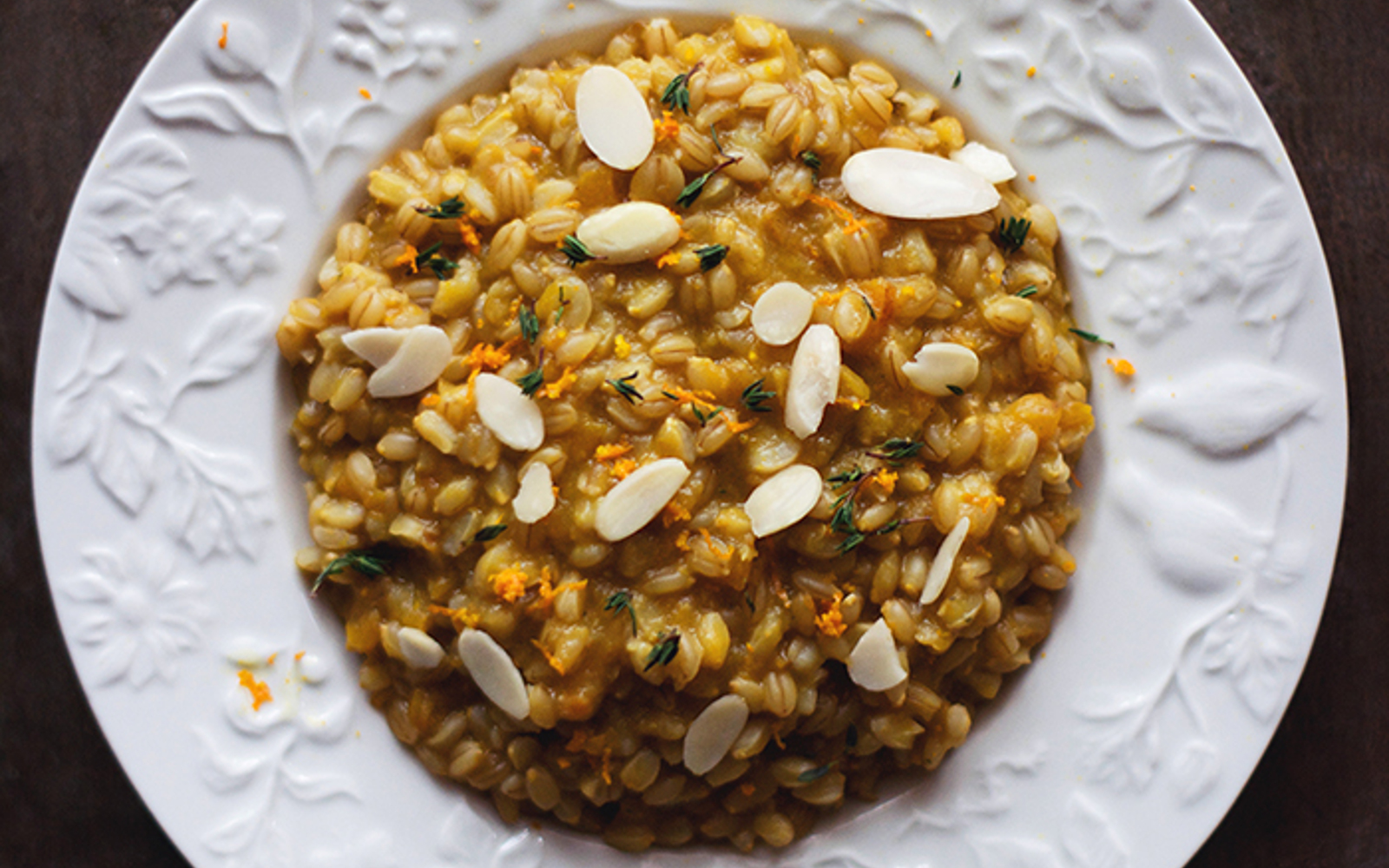 This risotto is made with hearty barley as an alternative to the standard arborio rice. In this Carrot Barley Risotto by Valentina Goltara, ginger and garlic substitute as aromatics in place of the traditional onion used in risotto, resulting in flavors that are unlike any other. 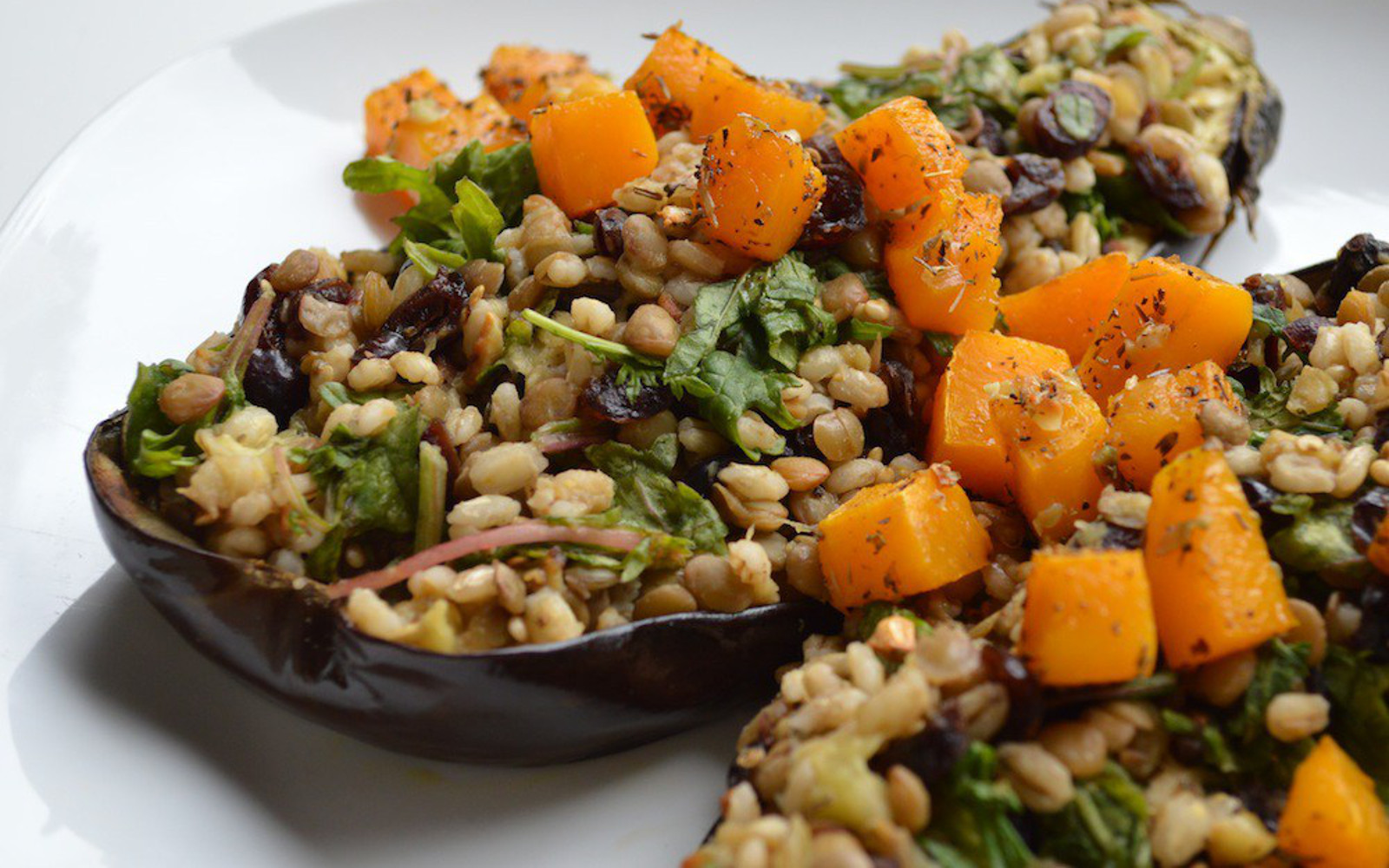 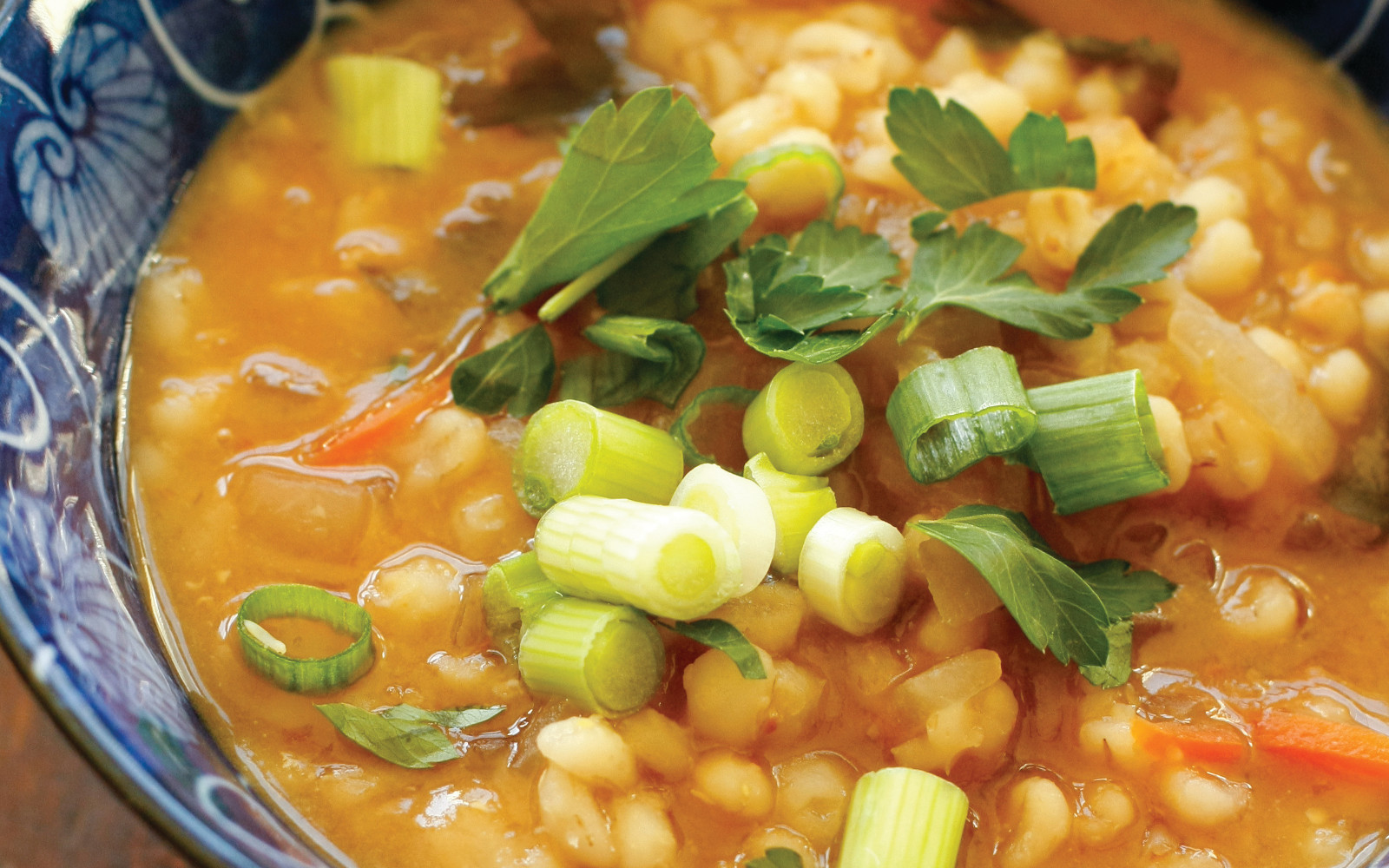 Ojiya, a Japanese-style seasoned porridge with vegetables, is a popular breakfast dish. Traditionally, it is made with rice but in this Macrobiotic Pearled Barley Ojiya: Japanese Breakfast Porridge from The One Peaceful World Cookbook, pearled barley is used instead. The grains are cooked with miso, onion, carrots, celery, and leeks. It’s perfect for chilly mornings when you’re craving a savory breakfast options. 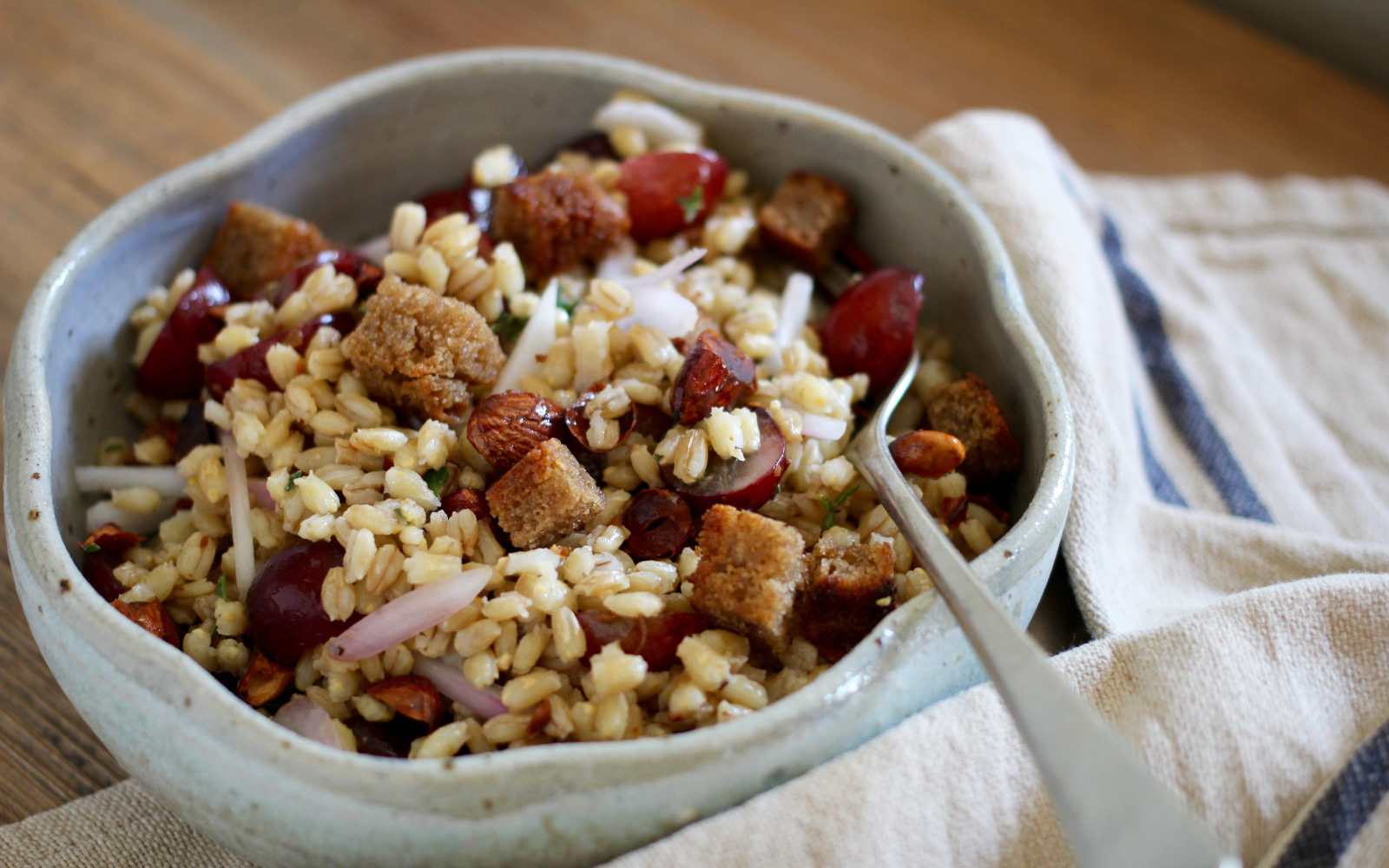 The nutty barley in this Lemony Pearl Barley Salad With Almonds and Herbs by Sarah Gory pairs perfectly with sweet, juicy grapes, and a bite of onion. Along with the nutty crunch from the almonds and the lemony dressing, this simple-looking dish is something special. Serve with fresh spinach for some added flavor. This dish feels both simple and special at the same time! 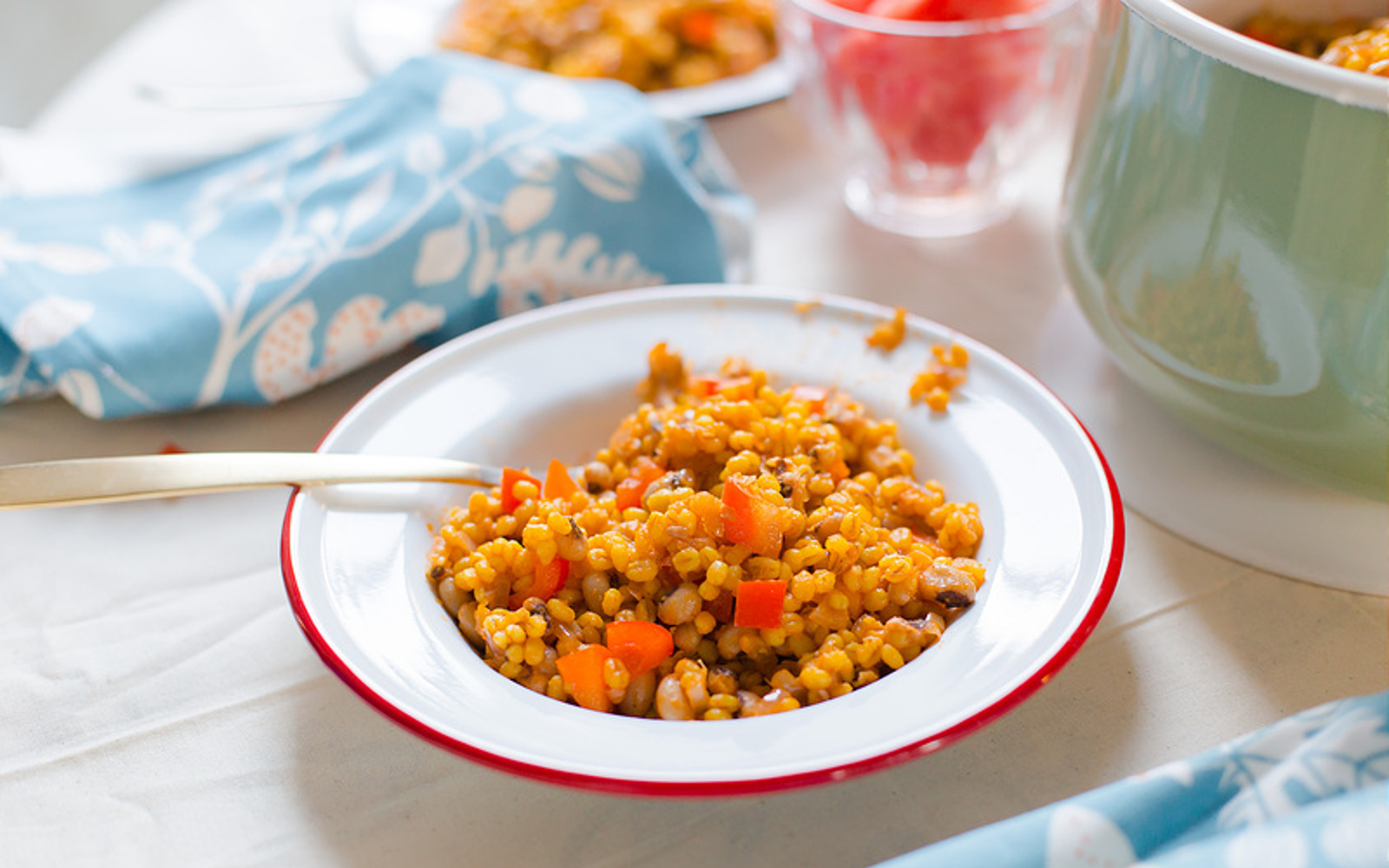 Hearty and lush, this Saffron Barley With Black-Eyed Peas by Elsa Brobbey is a great dinner option for when you want something filling and flavorful, but don’t want to spend all night cooking. In less than an hour, you can have this colorful and nutty entrée, flavored with delicate notes of saffron. Make sure to garnish with plenty of ground black pepper!

Impress your honey (or pal!) with these Valentine’s Hummus and Pearl Barley Bowls by Sasha Gill, topped with roasted sesame butternut squash and pomegranate seeds! Who says a romantic dinner can’t be healthy? 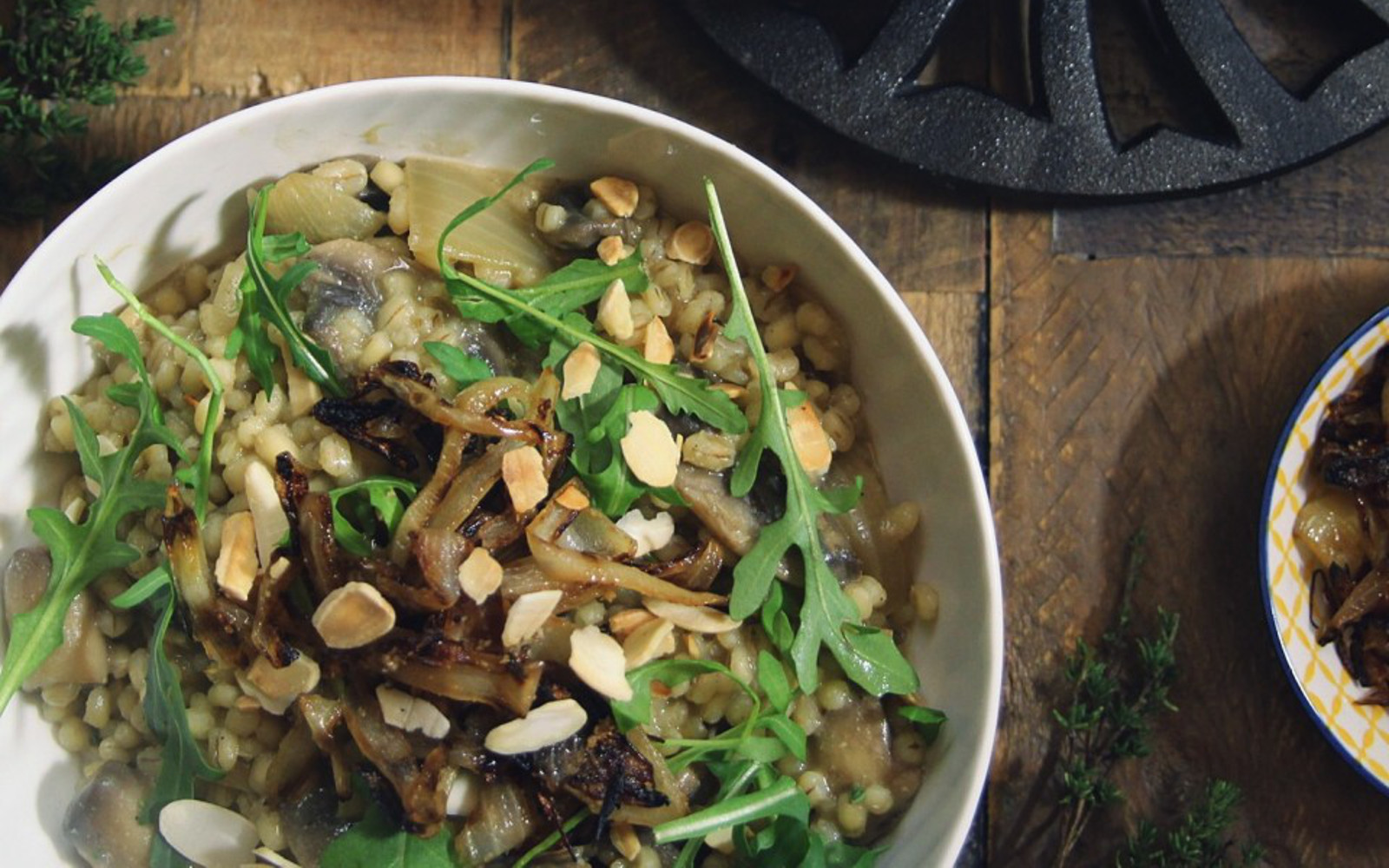 This rich and creamy Mushroom Pearl Barley Risotto by Niki Webster is paired perfectly with meaty, sautéed mushrooms and sweet caramelized onions. Pearl barley is used in the place of the standard arborio rice, lending its dense, chewy texture to this savory and cheesy meal. A handful of fresh arugula adds a peppery taste and some fresh greens into the mix. 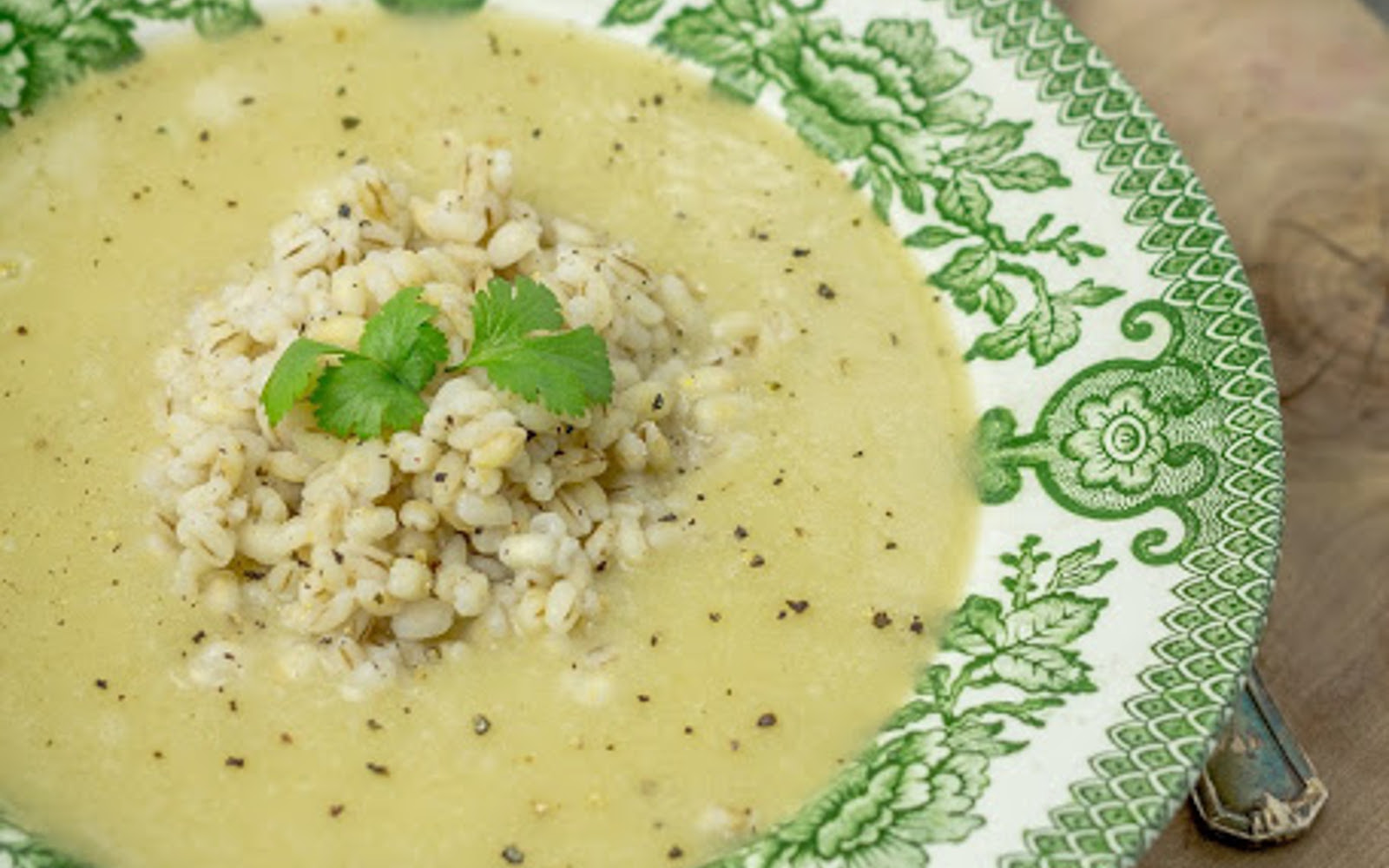 This Cream of Potato and Lentil Spring Soup by Magdalena Pienkos is rich, hearty, and extremely easy to make. The creamed potatoes and lentils give the soup a nice weight and structure and the hint of garlic accents them with just the right amount of flavor. 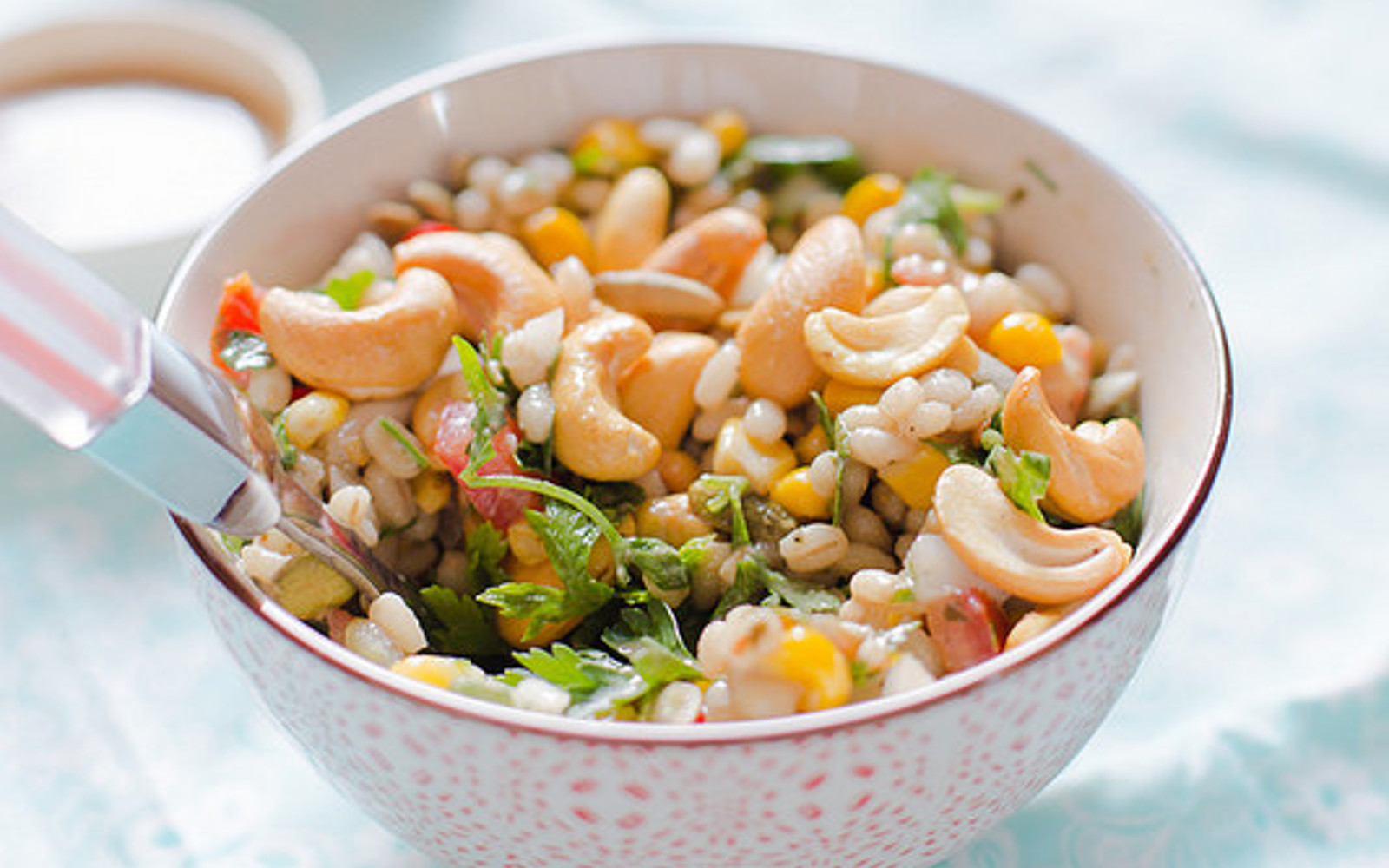 Pearl barley, cashews, pumpkin seeds, and corn in this lightly seasoned Pearl Barley Salad by Elsa Brobbey will leave you feeling satisfied. This simple, tasty, and hearty salad makes a delicious side, warm or cold! 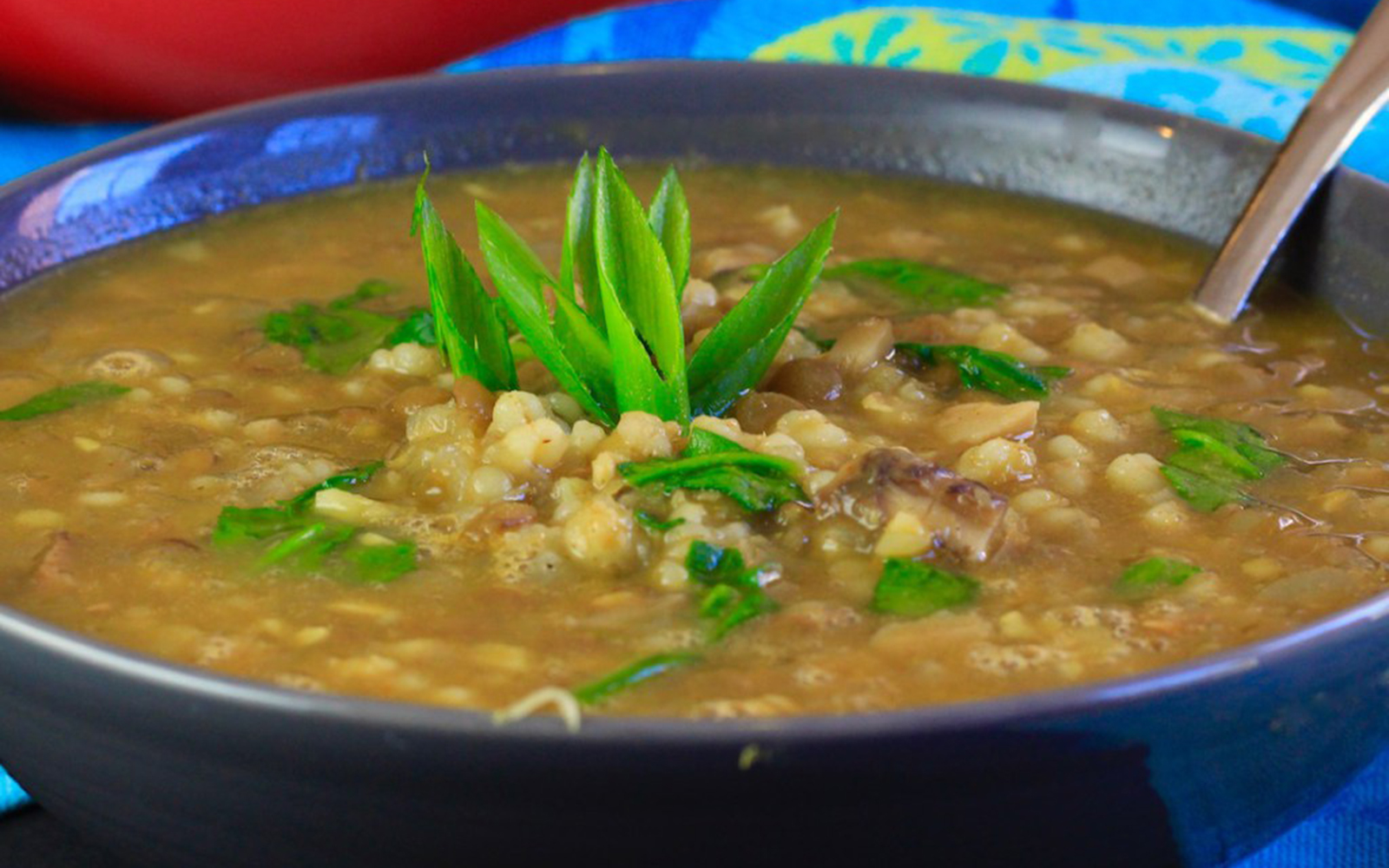 This Curried Mushroom Barley Lentil Soup With Spinach by Tara Binder is not only for vegans but for the meat eaters in your life as well. Why meat eaters? Well because this soup is rich with umami, the fifth ‘taste’ that makes foods savory, complex and deeply flavorful.

Looking for more grain-filled recipes? Try 15 Whole Grain Plant-Based Recipes and 15 Grain and Veggie Bowls to Get You Back On Track in 2019! We also highly recommend downloading our Food Monster App, which is available for both Android and iPhone, and can also be found on Instagram and Facebook. The app has more than 15,000 plant-based, allergy-friendly recipes, and subscribers gain access to new recipes every day. Check it out!

Being publicly funded means that we get to continue to provide you with quality content. Please support us!