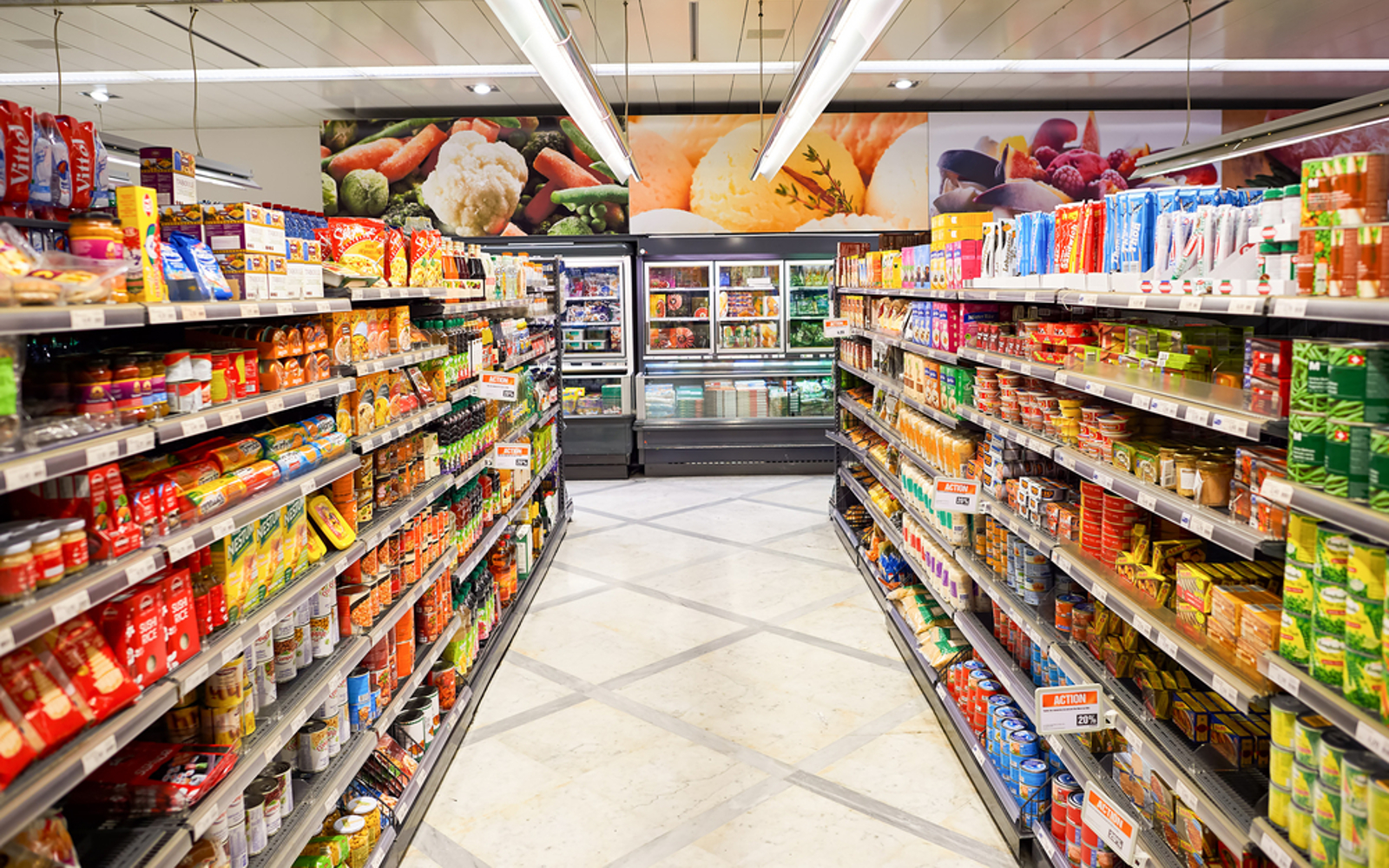 If you grew up in the United States, then the chances that your dinner plate often consisted of a large portion of meat with two vegetables on the side are high. The need to include meat in every meal ties back to our obsession with protein and how a meal isn’t a meal unless it includes meat. The average person living in the United States consumes nearly double the amount of the daily recommended intake of protein and unfortunately, since the early 20th century, the main source of protein consumed by Americans has come from animals.

But in recent years, we’ve begun to see a change in the way consumers get their protein. Due to concerns such as climate change, health, and animal welfare, nearly one-third of Americans are consciously choosing to leave meat off their plate more frequently in favor of plant-based foods. The growth of the plant-based food sector is indicative of this change in our eating habits, particularly when it comes to plant-based meats. A report by global market research firm Mintel identified meat alternatives as one of the 12 key trends that would impact the global food and drink market in 2016. As further proof, some sources indicate that the plant-based meat market is set to reach $5.2 billion by 2020 and could make up one-third of the market by 2050. Not to mention, internet searches on how to cook high-protein recipes using plant-based meats and apps like Food Monster (available on Android and iPhone) that offer tons of plant-based recipes have been gaining tremendous popularity.

In response to the growing demand for plant-based meats, we’ve seen a surge in a number of new plant-based meats developed by start-ups like Beyond Meat, and old staples like Tofurky taking up entire sections of the frozen food aisle. In addition to carrying more vegan meat options, some grocery stores like Trader Joe’s offer their own line of vegan meat.

In addition to carrying more vegan meat options, some grocery stores like Trader Joe’s offer their own line of vegan meat. Surprised? So are we! Here are more grocery chains where you’ll find tons of options for plant-based meat. 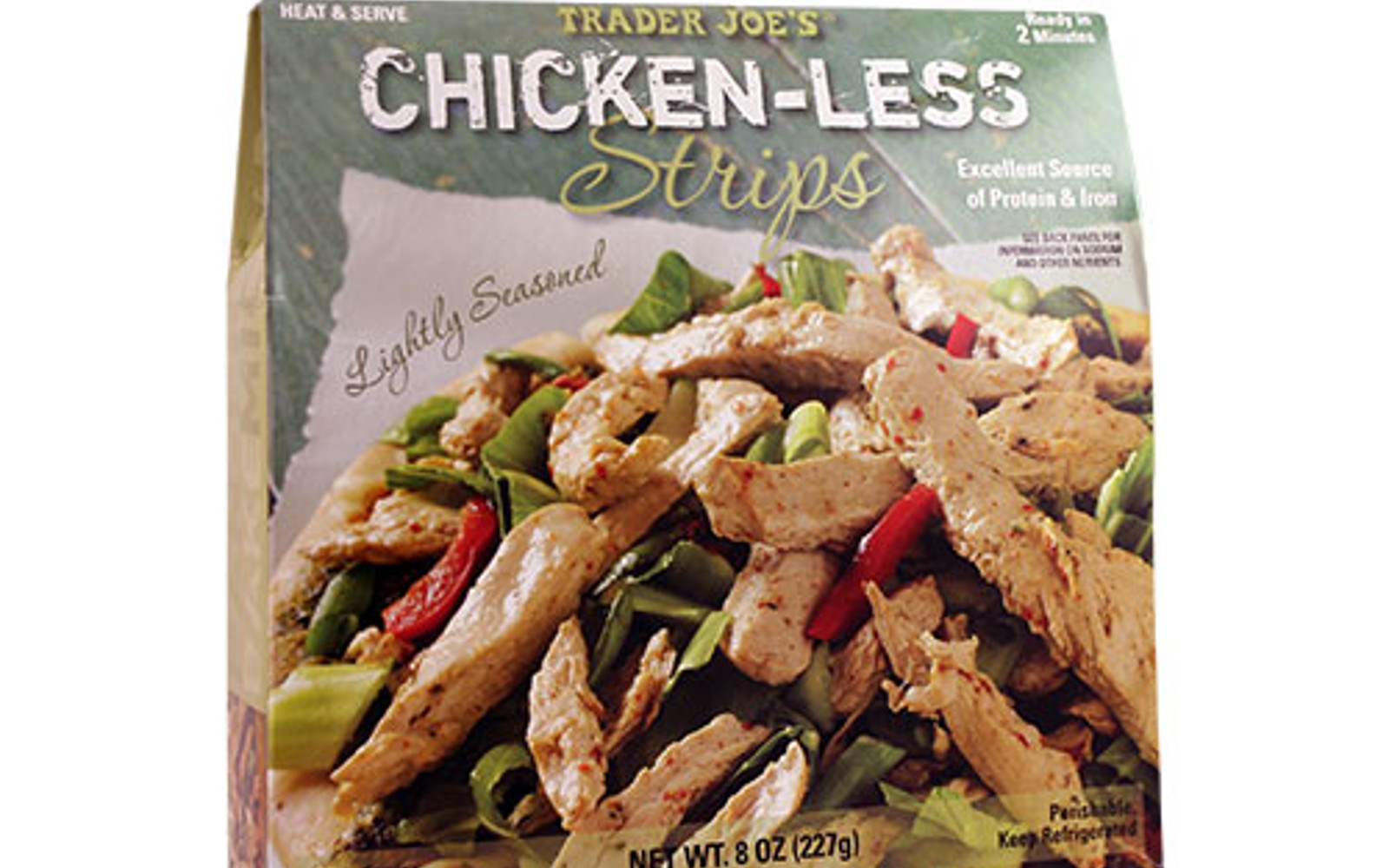 Trader Joe’s is one of the best options for budget-friendly grocery shopping. Pantry staples like dairy-free milks, organic fruits and vegetables, beans and legumes, and more are typically available for lower prices than what you might find at other grocery stores. But in addition to carrying plenty of affordable, whole foods plant-based options, Trader Joe’s also carries its own line of vegan meats that won’t break the bank. Their Chicken-Less Strips, for example, retails for just $2.99. But that’s not all they have. According to the company’s list of vegan products, they also carry Beefless Ground Beef (hello, taco night), Soy Chorizo (which beat out real meat for the title of “Best Meat” in Trader Joe’s annual awards), and seasonal options like Breaded Turkey-Less Stuffed Roast With Gravy. They also recently began carrying their own line of vegan mayonnaise, canned jackfruit, and nutritional yeast, so TJ’s is really killin’ it in terms of offering exciting plant-based options. 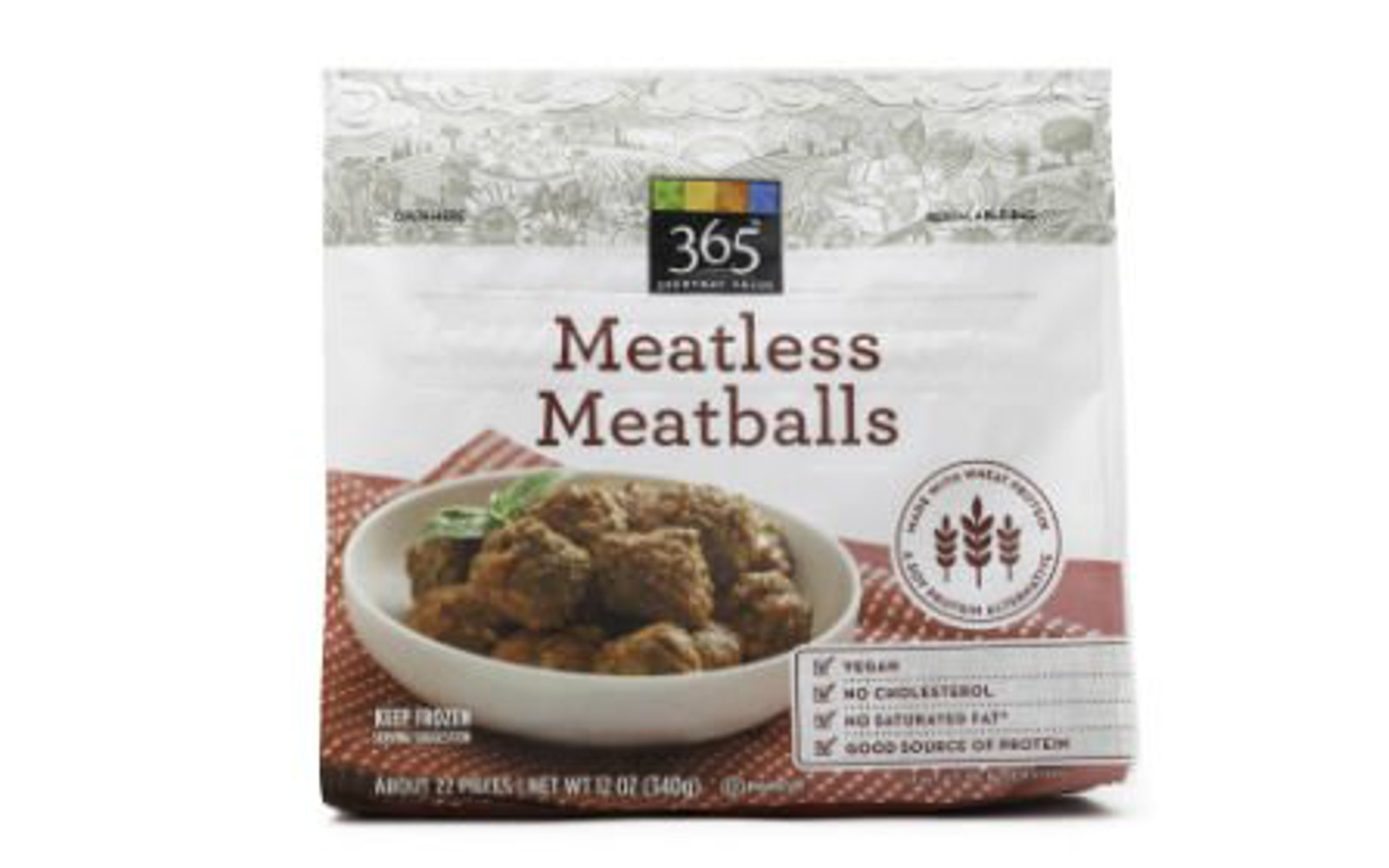 Whole Foods may have a reputation for being pricey, but experienced shoppers will tell you that their bulk buy section is fantastic for stocking up on pantry staples like dry grains, pulses, and dried fruit without having to commit to a full (and pricier) package. They also happen to carry a decent selection of meatless meats under their house brand, 365 Everyday Value. You’ve probably spotted their Meatless Meatballs, Chickenless Nuggets, and other meatless options in the frozen aisle. You can also find frozen Poblano Black Bean Burger and a Tuscan Kale White Bean Burger under their exclusive Engine 2® Plant-Strong® line of products, which focuses on whole, plant-based foods and of course, they carry just about every vegan meat option out there. And in addition to carrying their own brands, Whole Foods is a great source for vegan options of all kinds, like ready-made meals, ice cream, and more! 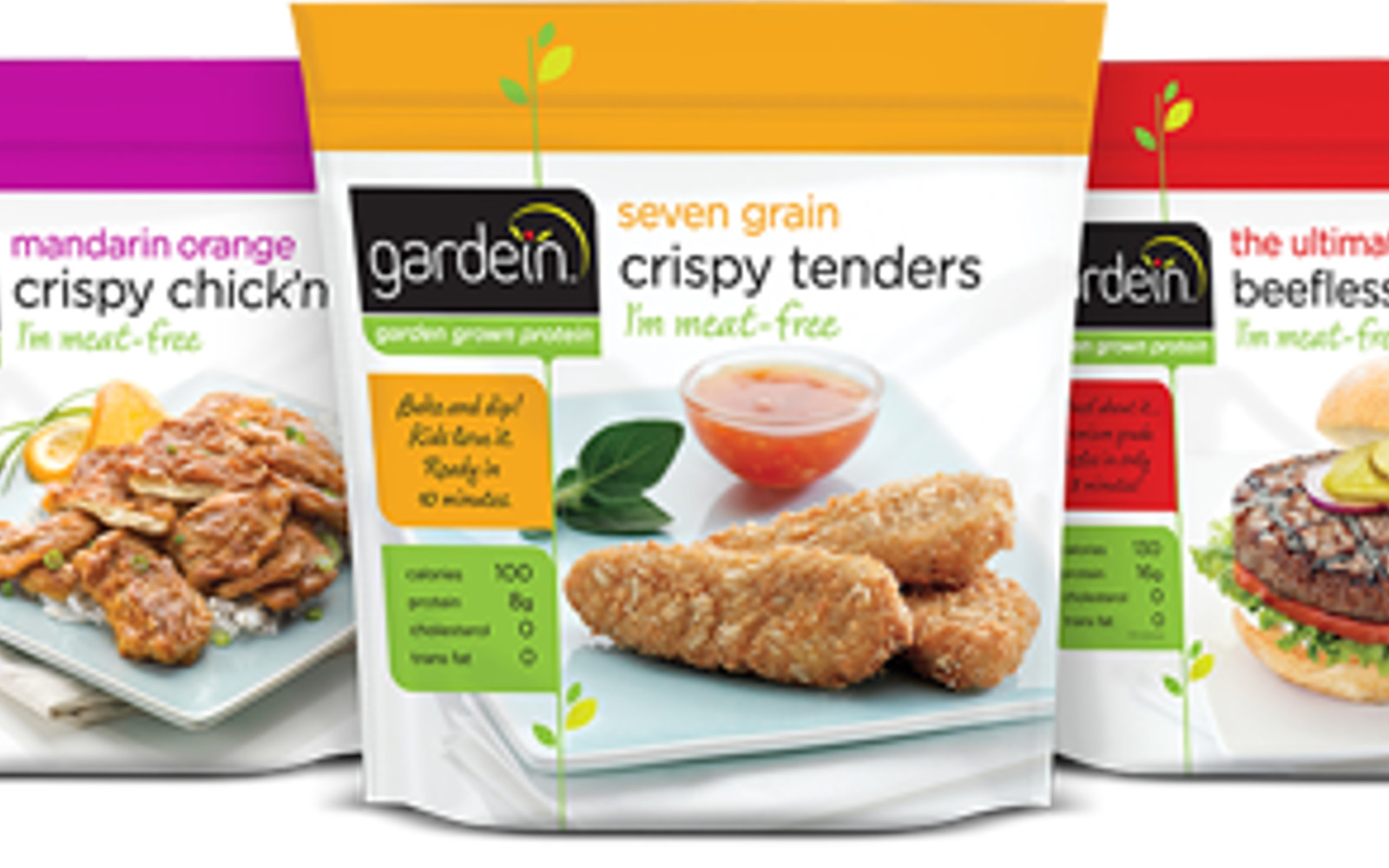 Stop and Shop doesn’t carry its own line of vegan meat, but it still has plenty of options for those looking for an easy way to cut back on meat. And with over 420 stores in the northeastern United States, they make finding vegan meat options accessible. You can find frozen vegan burgers, cutlets, and veggie dogs from brands like Gardein, Dr. Praeger’s, Quorn, and Morningstar Farms in their frozen food aisle — just be sure to check the label, as not all of Quorn’s and Morningstar Farm’s veggie products are vegan. 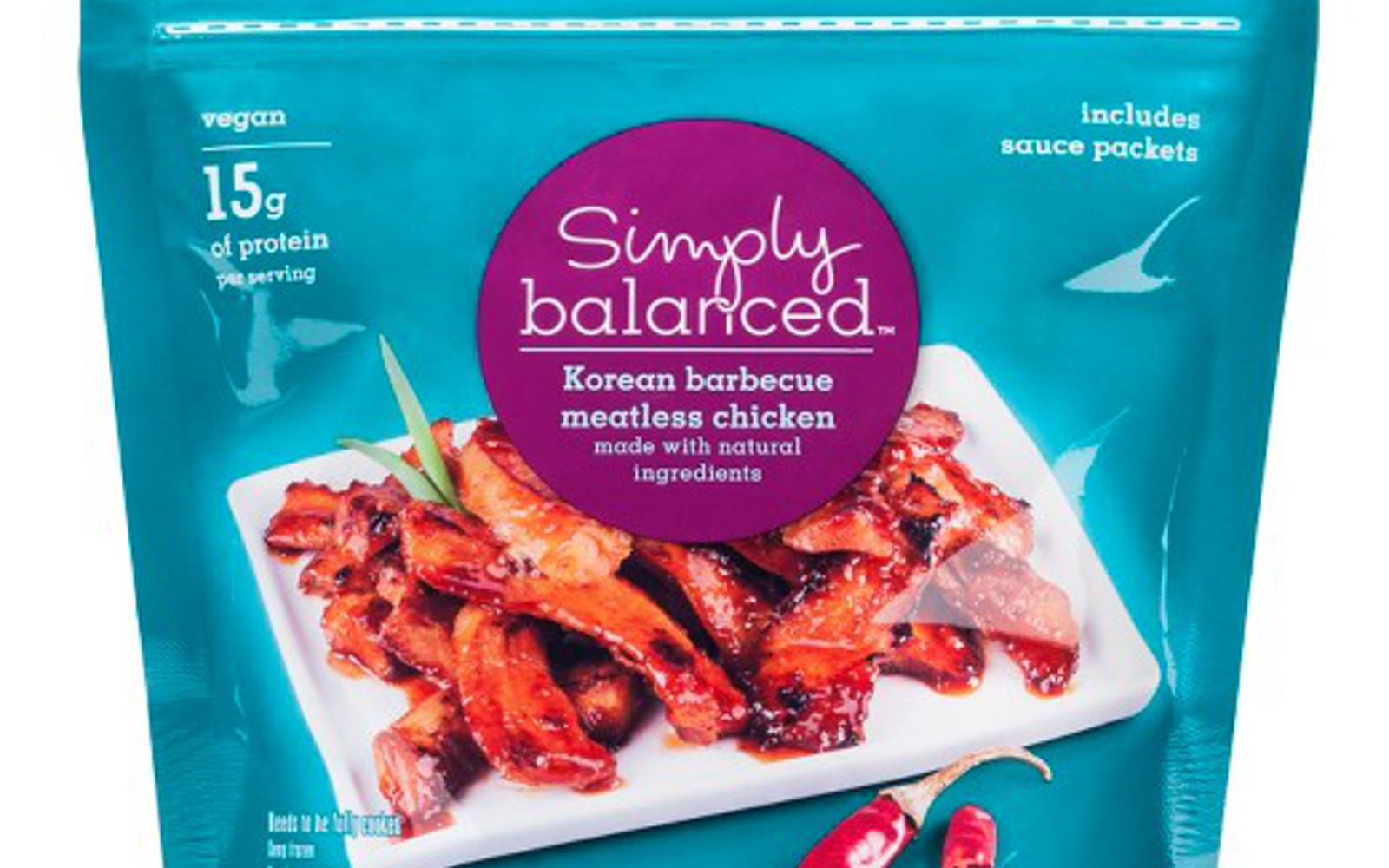 In recent years, Target has really stepped up its game when it comes to offering new plant-based options. They were one of the first chains to offer Ripple, a pea protein-based milk, Hampton Creek’s all-vegan Just Cookies line of products, and they even offer their own line of plant-based meats under their house brand, Simple Balanced — and truth be told, we’re kind of in love with the flavors. Rather than carry basic meatless meats that need to be paired with sauce, Target offers exciting varieties like Korean Barbecue Meatless Chicken, Smoky Chipotle Meatless Chicken, Mushroom Miso Meatless Turkey, and Teriyaki Meatless Chicken. While it’s nice to have a basic meatless meat that we can customize with our favorite sauces and flavors, sometimes, we just want to heat something up, throw it on a bed of grains, and call it a day. Target’s Simply Balanced line makes that possible — and delicious. 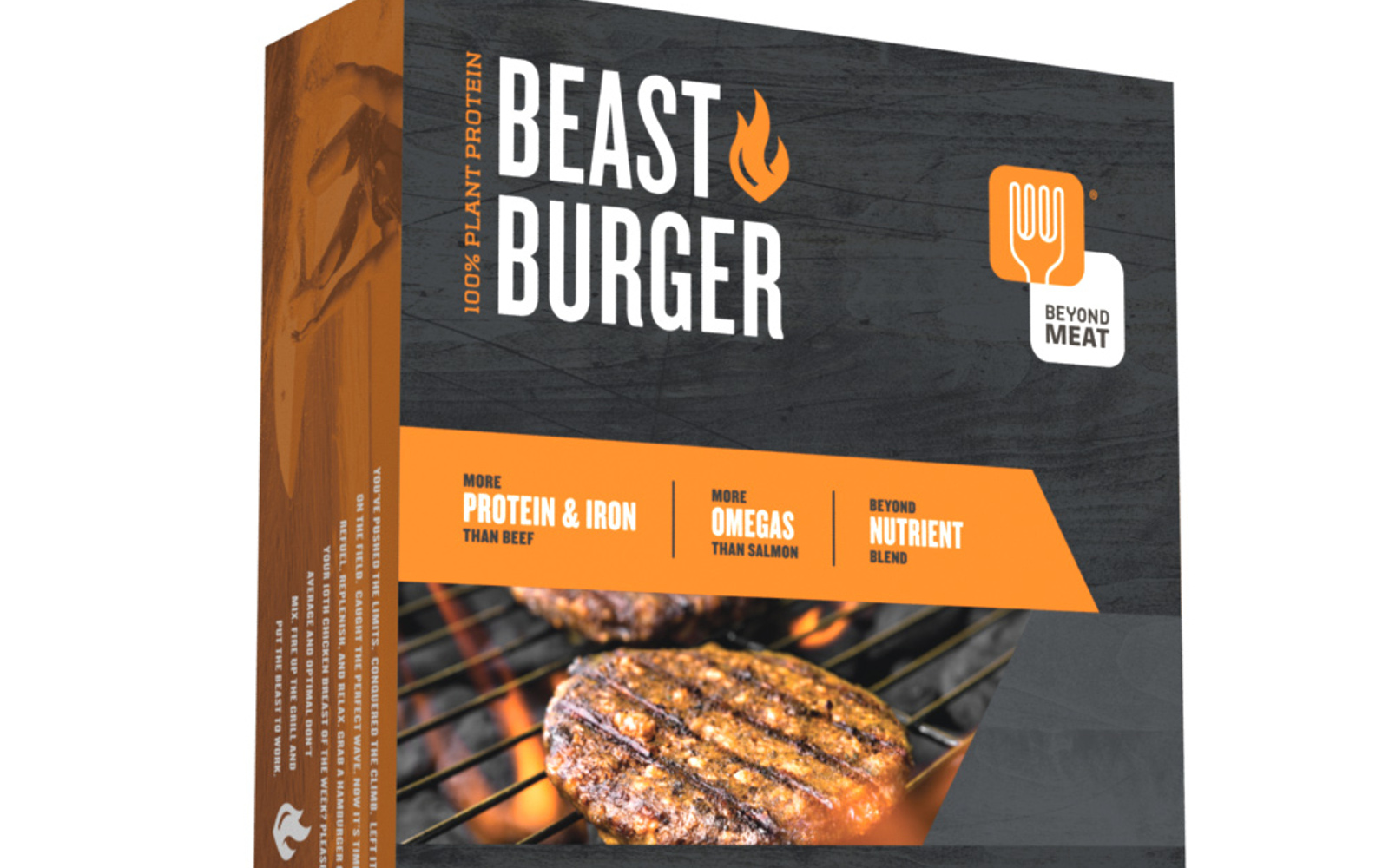 Costco and Walmart are the top two largest retailers in the world. In spite of that, chains like Trader Joe’s and Target are beating them when it comes to offering plant-based meats. But, that doesn’t mean that you can’t find great options at Walmart and Costco! According to PETA, Costco offers bulk options for brands like Dr. Praeger’s and Gardein at affordable, family-friendly prices and Walmart carries products from Beyond Meat, Lightlife, Gardein, and Boca. They may not be vegan meat, but you can find Hampton Creek’s premier product, Just Mayo, at both stores and Walmart happens to carry a variety of So Delicious Dairy Free products 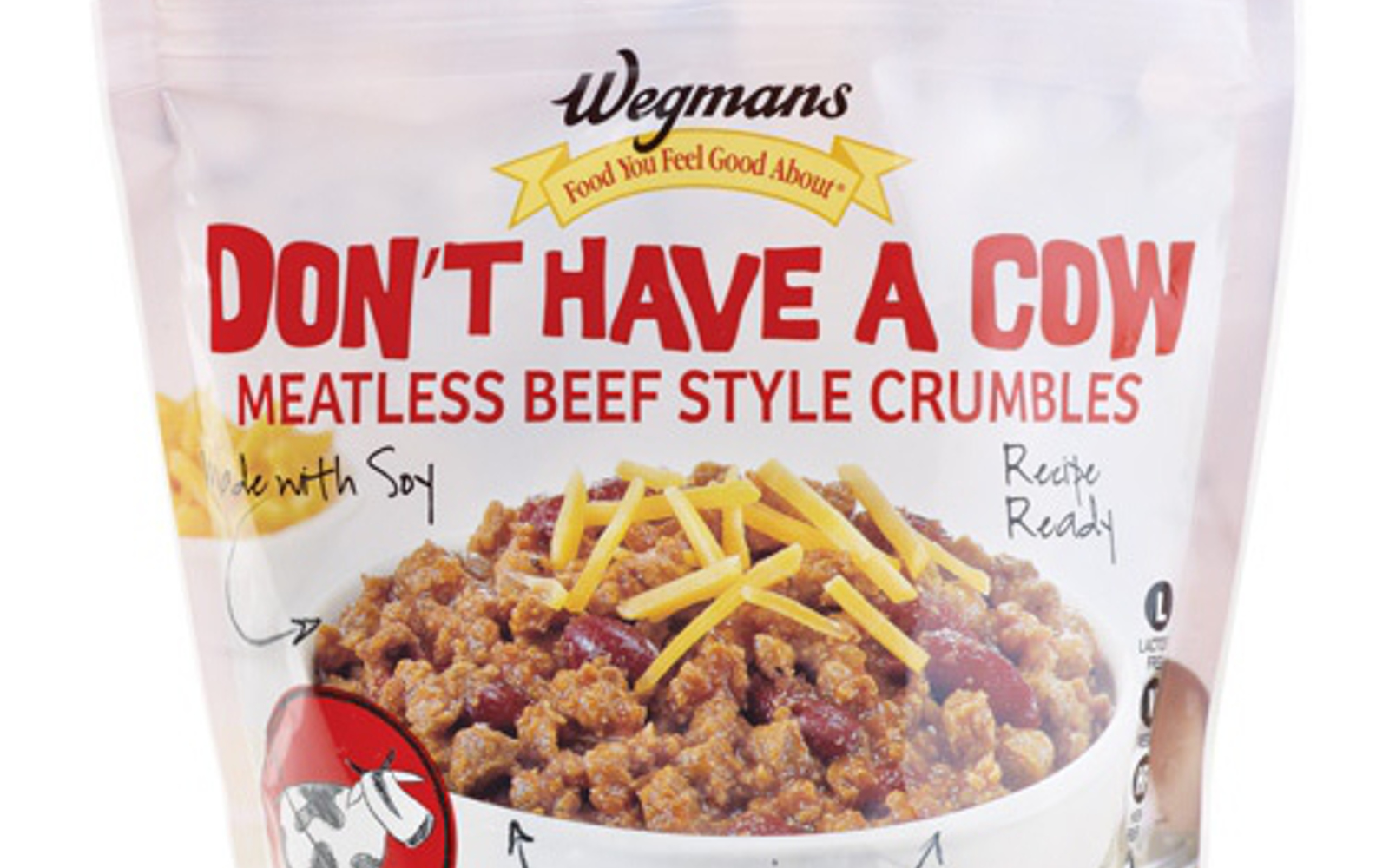 Wegman’s, a 101-year-old grocery store chain, has over 90 locations across the Mid-Atlantic and New England regions of the United States. In the frozen aisle, you’ll find Wegman’s a range of meatless meats under their house brand, Food You Feel Good About with names like Don’t Be Chicken Meatless Chicken Style Breasts and Don’t Have A Cow Meatless Beef Style Crumbles. 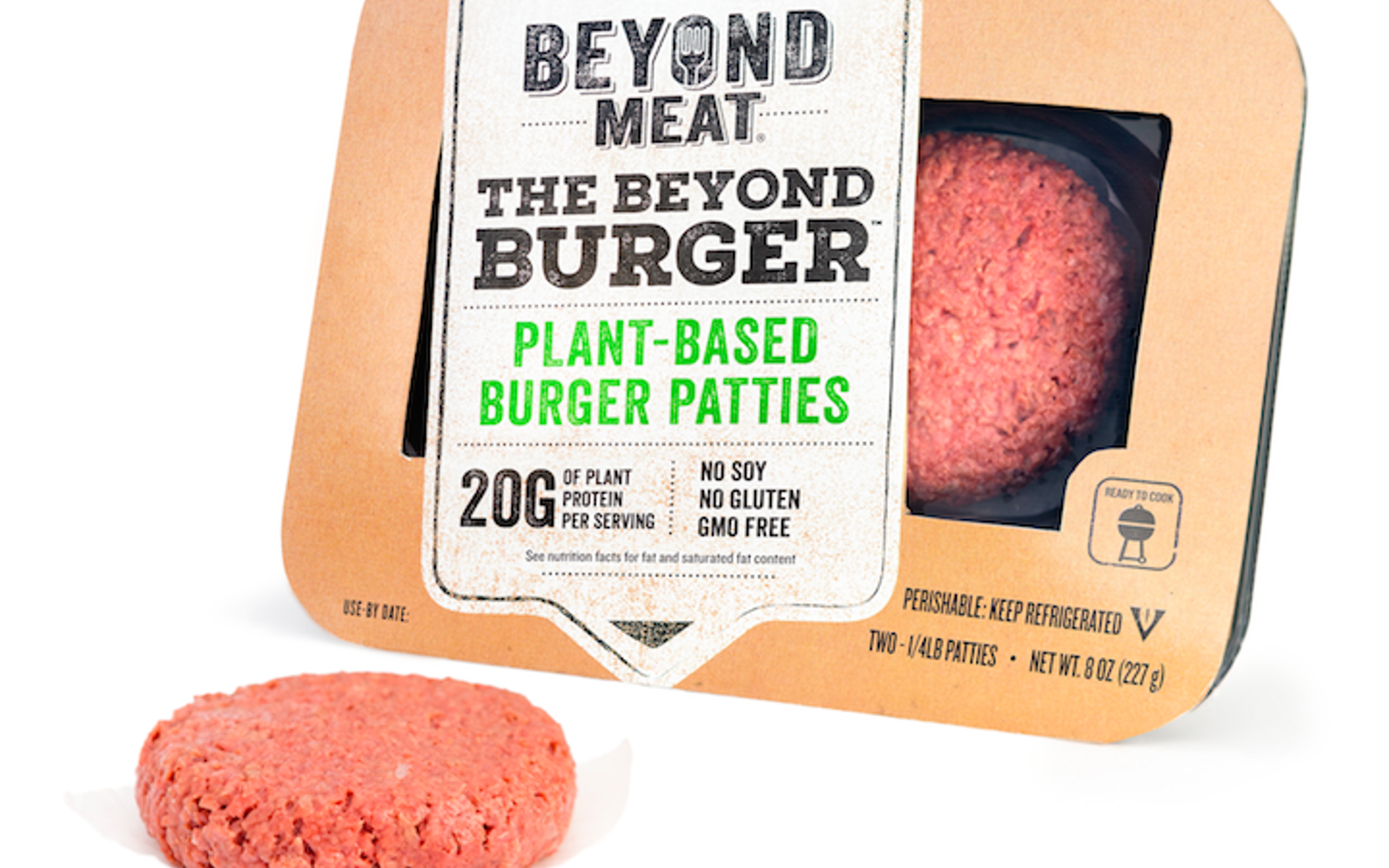 If you live in the Western U.S., then you’ll find plenty of meat-free options at your local Safeway. They carry several brands like Boca, Morningstar Farms, Gardein, Quorn, Field Roast and Beyond Meat. Recently, they started carrying the Beyond Burger, the meat-free burger that up until now, has been exclusive to Whole Foods throughout the country. They also carry lots of ready-made vegan options, which you can check out online.

8. Want to Make Your Own Recipes? We’ve Got You Covered! 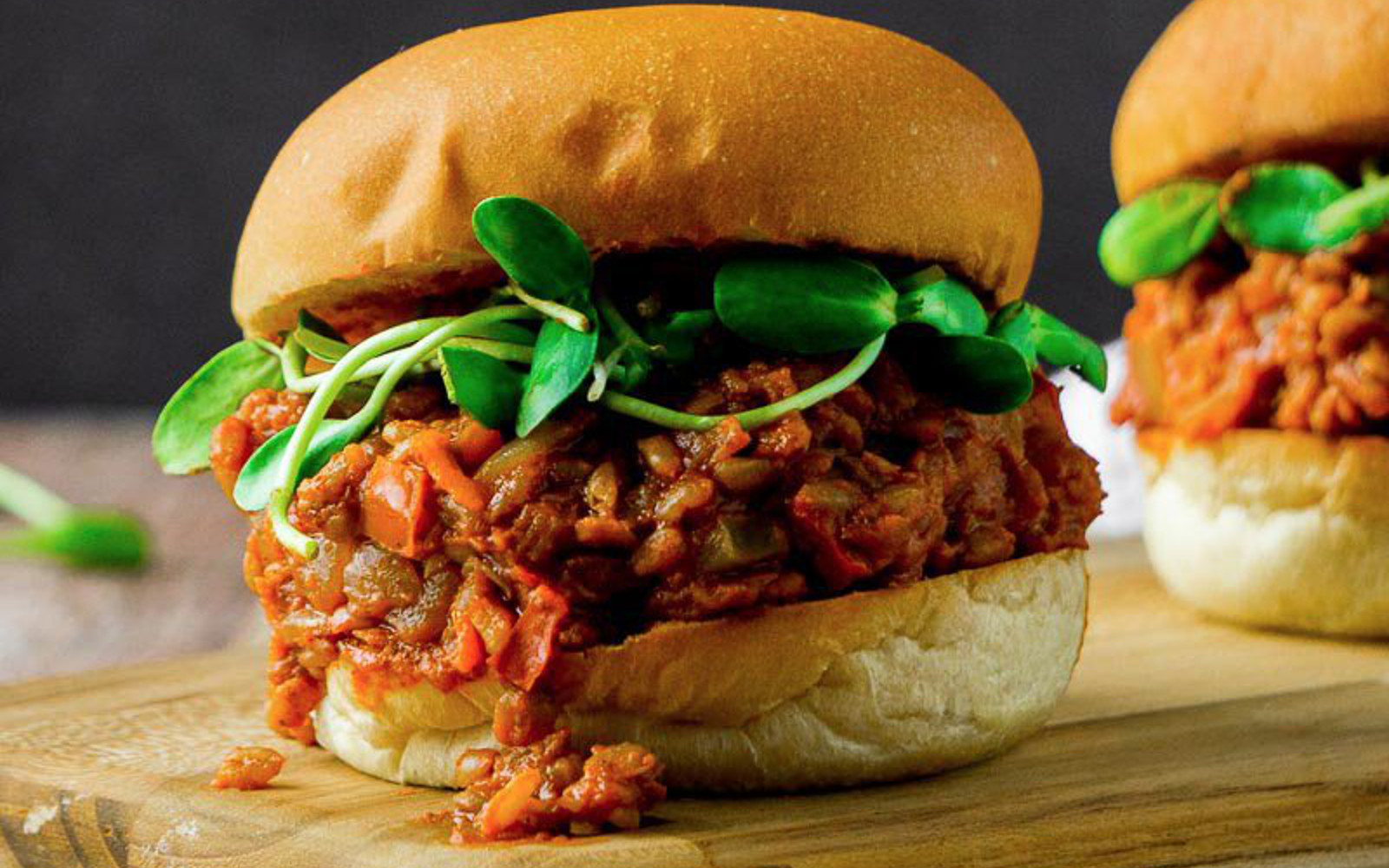 The convenience of prepackaged plant-based protein and readymade meals is great, especially when you’re short on time, but there’s something satisfying about making your own food from scratch. Worried about where you’ll get your protein without vegan meat? Don’t worry — we have hundreds of high-protein vegan recipes to choose from, like these Tempeh Black Bean Burgers, these Meat-Free Hot Dogs, and these meat-free sloppy Joes. You can find even more meatless, high-protein vegan recipes and browse among over 8000 plant-based recipes on the awesome Food Monster app (available on Android and iPhone).

Have you tried any of the store brand vegan meats on this list? Tell us what you think in the comments below!