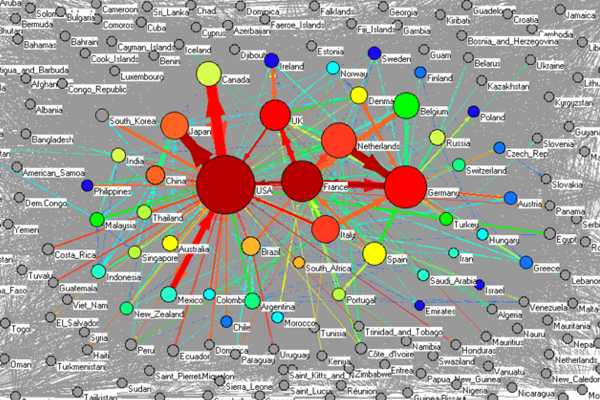 A paper published last week in PLoS ONE concluded that the growing complexity of our world food system may be compromising food safety.

A team of researchers from the United States, United Kingdom, Hungary and Romania used United Nations food trade data to describe what they have coined an “international agro-food trade network” (IFTN). The IFTN has seven countries at its core, each with a dense web of connections to many other nations. Analysis showed that each of the core countries trades with over 77 percent of the 207 countries on which the UN collects information! (click here for a larger version of the graphic above)

As a result, the researchers note, “the IFTN has become a densely interwoven complex network, creating a perfect platform to spread potential contaminants with practically untraceable origins.” Such a network poses a considerable risk in the face of a major food contaminant outbreak (e.g. food poisoning).

Processed foods with long lists of ingredients pose a particular challenge for food safety. Often with inputs, ingredients, and processing in dozens of locations, identification of the site of contamination becomes exceedingly difficult.

Although the configuration and complexity of our global food network poses a major challenge for food safety, the research team identified a couple of key strategies that could help. In particular, stricter regulation and monitoring in countries that import, process, and distribute many ingredients and products (i.e. countries that act as distribution hubs), could benefit the entire network.

The complexity of our global food system is concurrently awe-inspiring and disgusting – impressive and overwhelming. It brings us an unprecedented variety of foods throughout the year. But has it gotten too complicated? Might we actually be happier with fewer choices?

These days, it seems every food purchase requires complex decision-making. Which is more important, local or organic? And how “green” is it to import and consume so-called “superfoods” from around the globe?

Food safety and contamination aside, would we perhaps be healthier and even happier eating foods grown and prepared a bit closer to home? Might we be better in tune with the planet and by eating more seasonally?

This study certainly provides plenty of food for thought.