Meat Consumption in China Now Double That of the U.S. 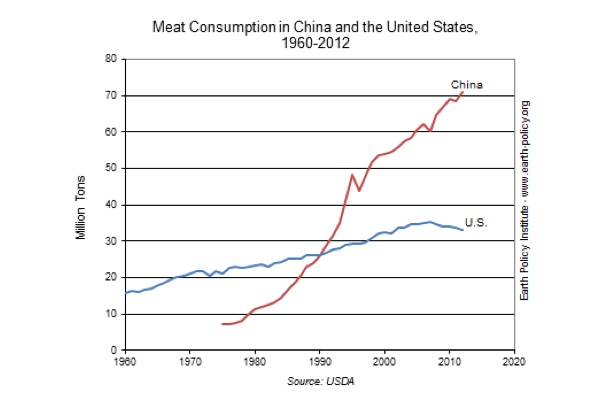 While U.S. meat consumption has been on a downward trajectory in recent years, the demand for meat in China continues to rise.

Pork: Pork is clearly China’s meat of choice, accounting for nearly three quarters of its overall meat consumption. The country’s pork consumption is expected to reach 52 million tons this year, compared to 8 million tons in the U.S. Currently, half the world’s pigs – about 476 million of them – live in China.

Chicken: 2012 marks the first time that more chicken will be eaten in China than in the U.S. The country’s consumption is expected to exceed 13 million tons this year.

Beef: Chinese beef production and consumption have not taken off as quickly as other meats, largely due to the higher costs and competing claims on land for grazing. Population pressure and land constraints have led the Chinese to seek more efficient forms of animal protein.

China is expected to consume about 6 million tons of beef this year, compared to 11 million tons in the U.S. However, population makes a big difference. The average American consumes about 79 pounds of beef each year, which is more than nine times the Chinese average!

Fish: China’s annual farmed fish output accounts for over 60 percent of the world’s total! The country produces 37 million tons of farmed fish each year, compared to less than half a million tons in the U.S.

Grains: In 2011, China harvested 192 million tons of corn, 140 million tons of rice, and 118 million tons of wheat, representing the largest grain crop of any country in history! One third of this historic harvest will be used for animal feed to meet the growing demand for meat, eggs and dairy products.

Why Should We Care?

Aside from the obvious impacts on animals, the environment, and the health of the population, feeding all these animals also presents a significant challenge for and threat to the global marketplace.

James Rice, chief of China operations for Tyson Foods was quoted: “This is the end of self-sufficiency for China. This year will be the last in which China produces enough corn for itself, and the last that it is self-sufficient in protein.”

He also noted: “Whenever China goes from being a net exporter to a net importer of anything, it has a big impact on global prices. Just look at oil. The $40 per barrel price popped just when China started buying.”

The report concludes: “China’s incredible appetite for meat has altered the landscape of the western hemisphere, where the land planted in soybeans now exceeds that in either wheat or corn.”

The growing worldwide demand for meat (and therefore animal feed) is threatening fragile ecosystems and species, as rainforest and savanna land are cleared to make way for vast soybean monocultures.

Think 71 million tons of meat sounds like a lot? While the headline reads: Meat Consumption in China Now Double that of the U.S., that statistic could be much, much worse.

The population of China is more than four times greater than that of the U.S. If their meat consumption is “only” double…they have a lot more potential for growth.

What if everyone in China ate as much meat as the average American – about 170 pounds per person per year? Suddenly 71 million tons would become nearly 112 million tons.