Turkeys are incredible animals for all kinds of reasons. From the way they can discern each others unique calls (of which researchers have discovered over 30!), to the way they develop bonds of friendship for life. Plus, check out those cool waddles!

For these birds, Thanksgiving isn’t a great time of the year. An estimated 46 million are used as the centerpiece for the family meal, which comes in at just under one third of the total annual turkey consumption in the United States.

Isn’t it awesome that there’s something we can all do about this? Aside from cooking a scrumptious, decadent, turkey-free meal this holiday ( that Butternut Squash, Portobello and Spinach Casserole with Vegan Sausage is calling our name!), the good folks over at Farm Sanctuary give us the opportunity to adopt a turkey of our very own!

Okay, to be clear, the turkey isn’t going to come and live with you, making snarky comments on the couch while you watch football like a character on a cartoon sitcom. What will happen is, for the small adoption fee of $30, you get an adoption certificate with details of the turkey you’re helping and Farm Sanctuary is able to give another feathered friend a safe refuge. 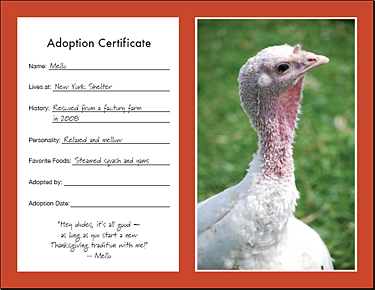 In existence since 1988, the Adopt a Turkey program has become a Thanksgiving tradition. This year’s spokesperson, Portia de Rossi says it best, “Contrary to what most people believe, turkeys are just as smart, loving and full of feeling as my dogs. I’m happy to join people who want to make a positive difference for these animals.”

With locations in both Los Angeles and Orland California and one in Watkins Glen, New York, Farm Sanctuary has a huge impact on the lives and futures of all kinds of farm animals, including cows, chickens, goats and pigs as well as our favorite gobble gobblers. For a time of year that’s all about gratitude, we’ve gotta say, that’s something to be pretty thankful for.