Thanksgiving is fast-approaching and sadly, many people refer to it as “Turkey Day.” It almost sounds as if it’s a celebration of turkeys but it would be more accurate to call it “45 Million Turkeys Get Murdered Day.” On a holiday that is about giving thanks and being grateful, we should be celebrating life, not taking it away. Too many people think turkeys are just “dumb” birds but that is completely wrong. Turkeys are social, playful birds who are intelligent and have distinct personalities just like dogs and cats. If you have ever interacted with a turkey, you know just how beautiful and affectionate they are. Let’s look at some of the many reasons to love turkeys.

Turkeys don’t just say “gobble, gobble.” In fact, male turkeys are called “gobblers” because that is the call they make to flirt with the females and compete with the other males. This gobble can be heard as far as a mile away. However, turkeys have been known to have over 20 distinct vocalizations including “yelps,” “purrs,” and “kee-kees.” Turkeys can recognize each other by their unique voices.

Turkeys have a bad reputation for being “dumb” and “not knowing enough to come in out of the rain.” The truth is that turkeys have a genetic condition called tetanic torticollar spasms. This condition causes some birds to act abnormally, sometimes cocking their heads and starting at the sky for 30 seconds or more. Unfortunately, this condition has led to the misconception about how smart turkeys are. Turkeys are actually quite intelligent. They are really good at geography and can learn the details of really large areas which is especially useful for finding food. Turkeys exhibit problem-solving behavior and are curious and inquisitive animals. They are always checking out new sights and smells. 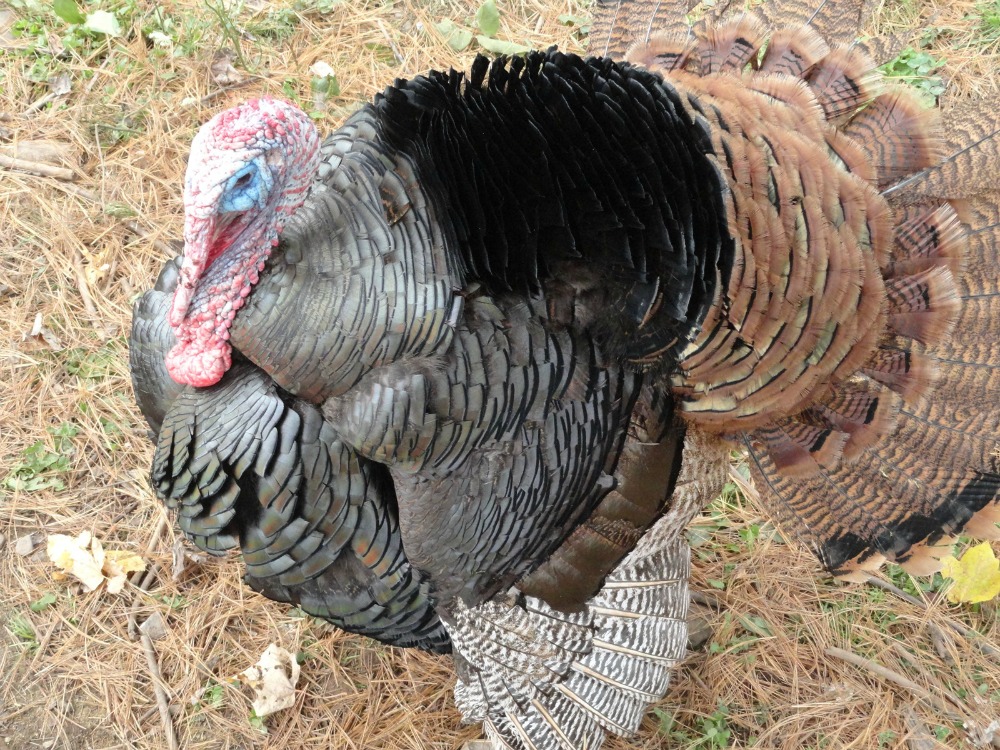 Male turkeys, or “toms,” attract hens with their wattles, colorful flaps of skin around their necks, and beards on their chests (no body waxing for turkeys). To attract a female, toms puff up their bodies and spread their beautiful, colorful feathers. Males have feathers that are red, green, purple, copper, bronze and gold while the females have muter shades of brown and grey. It’s quite a show and a real competition since a group of related toms will together court the females but only one will get to mate. It’s like “The Bachelorette” for turkeys.

Once a hen has found her mate, she will lay anywhere from 7 to 15 eggs, one egg per day over a period of about two weeks. Twenty-eight days later, the eggs hatch and there are a bunch of baby turkeys called “poults.”  The female is the one who takes charge of raising the babies until they are ready to go out on their own. The mother turkey stays with the poults at ground-level to keep them safe and warm until they learn to fly and roost up in the trees.

Turkeys are sensitive animals who have good and bad moods. You can tell what mood the male is in by the color of his throat and head. When a male is excited, his head turns blue and when a tom is about to get into a fight, his head turns red. Imagine if humans had this trait! 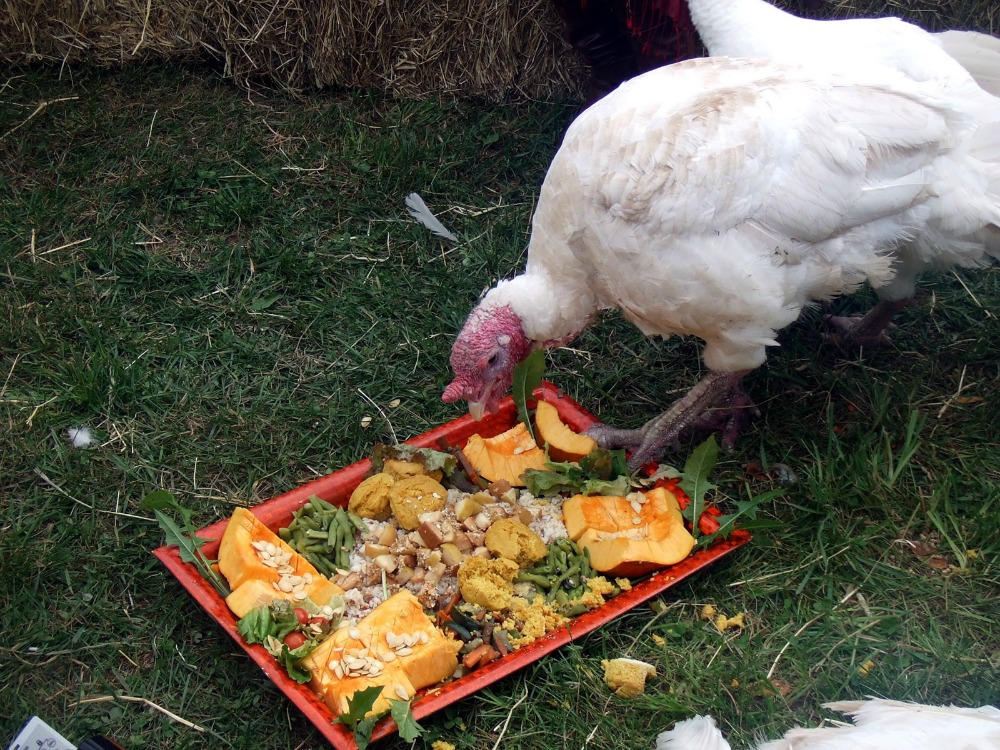 Turkeys are highly social, affectionate and love to play. If you toss an apple to a group of turkeys, they will play with it like a football. They create long-lasting social bonds with each other and with humans. Turkeys love to be stroked, petted and cuddled. They will remember your face and if they like you, they will come up to you to greet you. Turkeys also love music and will cluck along with the songs.

Domestic turkeys may not be able to fly due to their selective breeding to have extra-large breasts but wild turkeys can indeed take to the skies. In fact, wild turkeys can fly at speeds up to 55 miles per hour for short distances. Turkeys are also fast runners and can get up to speeds of 25 miles per hour. There ought to be an Olympics held just for turkeys! Other incredible facts: turkeys have a keen sense of hearing even though they have no ears. They have a wide field of full-color vision and can see movement almost a hundred yards away. Their sense of smell isn’t so good but they have an excellent sense of taste (even if they do eat small reptiles).

9. Learn from the Past

The turkey is believed to have been sacred in ancient Mexican cultures. They were referred to as the “Great Xolotl” or “jeweled birds” by the Mayans, Aztecs and Toltecs. In 1776, after the bald eagle was chosen to be the national bird of the United States, Benjamin Franklin expressed his disapproval in a letter to his daughter.  He said the turkey was a “much more respectable bird” than the bald eagle who was a scavenger. It just shows how much we have to learn from the past.

Turkeys can live up to ten years. That’s ten years of life filled with intelligent, social activities and being with family. Ten years of finding natural food, taking dust baths, cleaning themselves in the sun and sleeping in the trees. Sadly, turkeys raised for food don’t get this life. Instead they are confined to filthy, small spaces where they are forced to sit and stand crowded together in dusty, ammonia-filled cages and coops. Instead of grass and berries, they are forced to eat unhealthy garbage meant to do nothing more than fatten them up. Turkeys get so heavy they not only can’t fly, they can’t even mate naturally. They have to be artificially inseminated. Their skeletons cannot support their weight and the turkeys have trouble even standing. Turkeys are brutally debeaked and cannot eat or preen properly. They develop many illnesses including respiratory disorders, foot ulcers, breast blisters and burned eyes. They are drugged with vaccines and antibiotics so they survive until it’s time for their slaughter. These beautiful birds which could have lived up to ten years are killed when they are only a few months old. 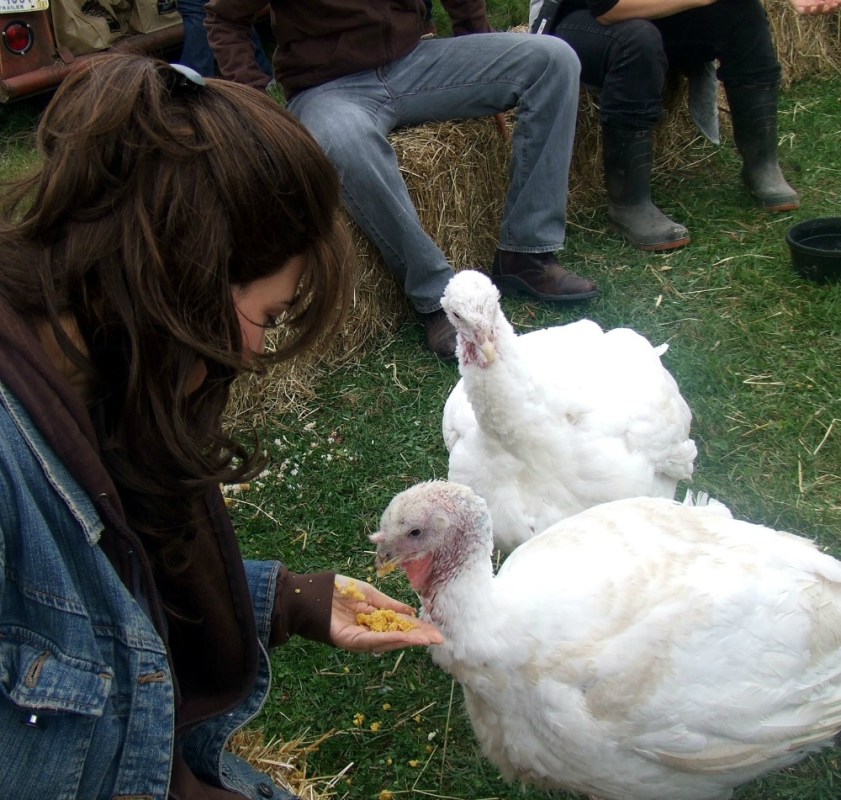 Turkeys are such beautiful animals. I was so happy that I got to get up close and personal with turkeys, feeding them and touching them. My eyes got teary as their full majesty was before me. These birds deserve to live in peace and safety. Please don’t eat a turkey this Thanksgiving. Choose life instead.