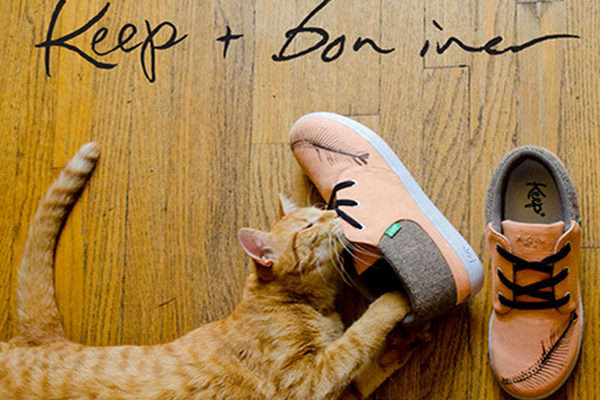 Sneaker collaborations have been the latest hype in the music industry with the recent release of the second installment of the Nike Air Yeezy earlier this month, made in collaboration with Kanye West. Now, another band and another shoe company are teaming up to create a range of sneakers that not only look cool, but also benefit our furry friends.

Bon Iver’s Justin Vernon recently released sneakers in collaboration with the LA cruelty free shoe company, Keep in support of America’s largest animal welfare rescue groups, Best Friends Animal Society. The vegan kicks feature herringbone accents and black fishbone details across the toe, canvas upper custom dyed to a perfect pale salmon and is part of Bon Iver’s own range of footwear “The Ramos” which is to be carried by Keep, according to The Complete Music Update. Proceeds from sales will be donated to the animal charity.

While a review from the LA Times considers the design idea to be a seemingly bold move, citing Vernon’s choice of mixing the colors black and brown, from the shoelaces and the herringbone respectively, to be “something only a Midwesterner would attempt” and adding that “it’s a novice’s mistake,” it seems that the main selling point of these footwear is the cause it supports. Taking account of its price at US$75.00, it is a far cry from that of the Nike Air Yeezy II at US$245. This is not the first time that Keep collaborated with an artist to make footwear for a cause. BlackBookMag notes that the Keep had created “Tobin” with the band Animal Collective back in 2010 to benefit the Socorro Island Conservation Fund.

While we are curious whether the design gets a yay or a nay from our readers, we do know that it gives us another reason to love Justin and Bon Iver (you know, this song). Have some more love to give? Find out how you can help the abused and abandoned animals at Best Friends Animal Society.