From the viewers perspective, life for zoo animals is pretty easy. They get to spend the day in a cozy enclosure, their meals get delivered at the same time every day, they get to exist without a single care in the world, right? Well, from our perspective this might be the case, but from the view of the animals, things aren’t quite so comfortable. Rather than seeing a “state of the art” enclosure, animals see a small space that pails in comparison to their native habitat. In the wild, these animals live in complex social and familial groups, they don’t have to rely on others to deliver them food, but rather the pursuit of their next meal is an exhilarating, natural part of their day. All species have evolved and developed to thrive in their native surroundings and when this is taken away, they are left with all the same instincts and no ability to express them.

With this in mind, it is really no wonder than a majority of zoo animals suffer from “zoochosis.” The term “zoochosis” was coined in 1992 by Bill Travers to characterize the obsessive, repetitive behaviors exhibited by animals in captivity.  These behaviors range from pacing to rocking and swaying, all the way to aggressive self-directed behavior like self-mutilation, over-grooming, and vomiting. It is thought that these actions are an outward manifestation of the animal’s deep mental distress. Could you imagine being locked in a box and having your freedom and ability to live as you please taken away … for no reason that you can understand?

Consider this, primates like gorillas and chimpanzees share around 90 percent of the same DNA as human beings. They’re known for their high intelligence and some, like Koko, have even learned sign language. These animals thrive in the company of others and require mental challenges and enrichment to thrive. Sadly, life in the zoo can never truly satisfy the needs of these animals.

Knowing this makes the sweet look of hope from this baby gorilla, Gladys, born at the Gladys Porter Zoo in 2013, more devastating than anything. 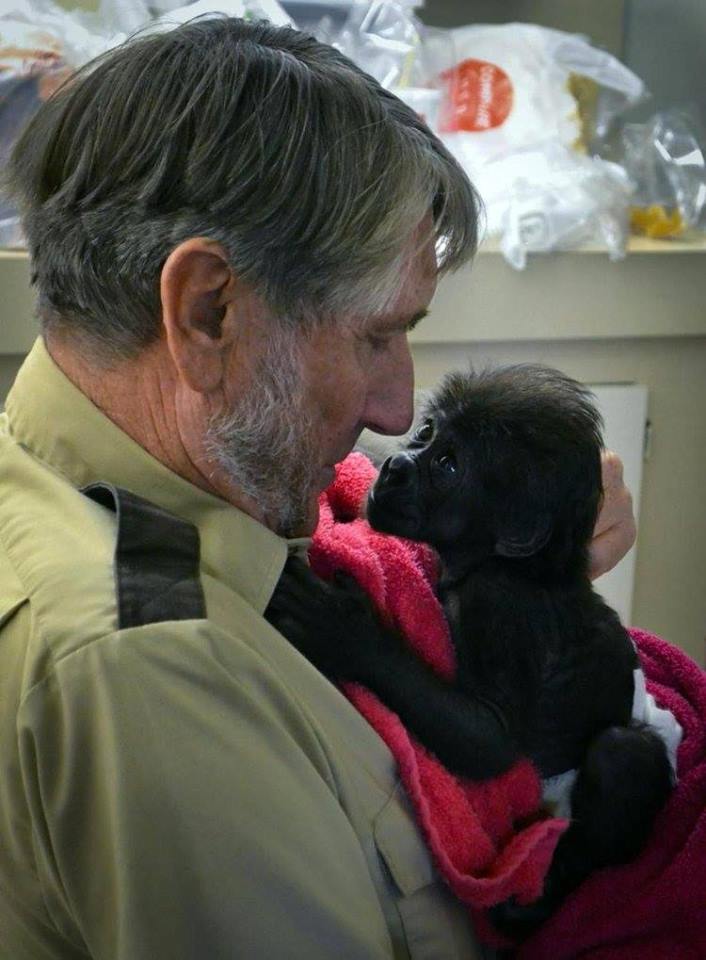 Little Gladys is the half-sister of Harambe, the 400-pound gorilla who was recently shot at the Cincinnati Zoo days after his 17th birthday after a four-year-old boy fell into his enclosure.  Jerry Stones, the zookeeper featured in this photo, helped raise Gladys and Harambe and was beside himself with the news that the gorilla had been killed.”He was a special guy in my life. Harambe was my heart. It’s like losing a member of the family,” Stone told the Daily News. “I raised him from a baby, he was a sweet cute little guy. He grew up to be a pretty, beautiful male. He was very intelligent. Very, very intelligent … His mind was going constantly. He was just such a sharp character.”


While there has been an enormous amount of speculation over whether it was necessary for zoo officials to kill the gorilla rather than use tranquilizers, the blaring reality that Harambe should have never been in captivity has been largely ignored. There is no reason that this gorilla ever needed to be in the zoo other than for the sake of our own entertainment.

Knowing what we do about the intelligence of animals, it is incredibly difficult to justify keeping them in captivity when our efforts to help these animals could be so much better placed in conserving their natural habitat. Seeing the hope in Gladys’ face paired with the harsh reality that she will likely grow up to know nothing but a life of frustration – coupled with what became of her half-brother Harambe, we have to ask ourselves if we really can’t do better.

Is it worth compromising the life of an animal for a few moments of entertainment? We think not.