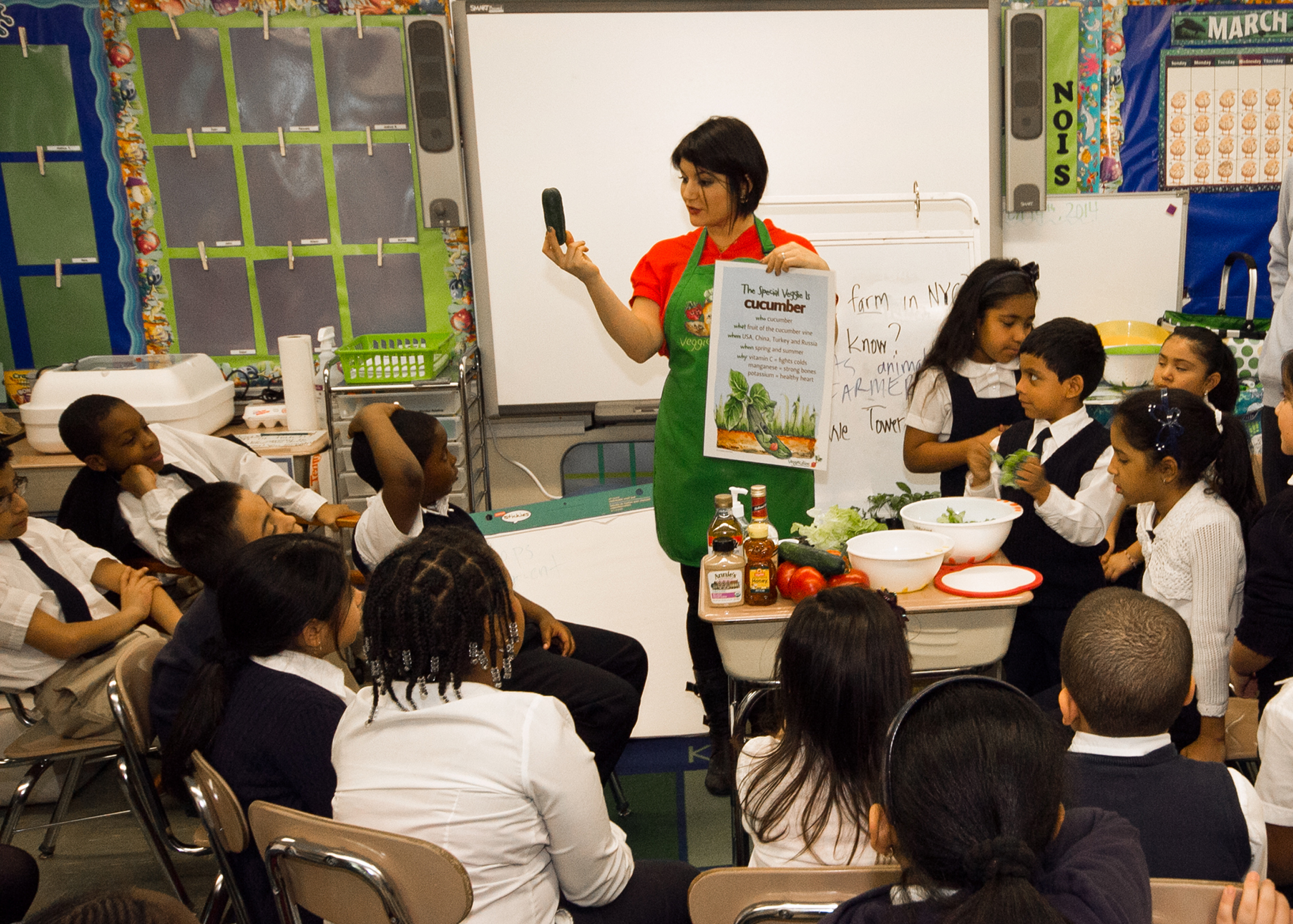 Veggiecation, started in 2009 by Lisa Suriano, is a nutrition education program that engages children with activities and hands-on cooking demonstrations to help them get familiar with healthy vegetables.

“The mission of Veggiecation is to promote and educate communities on the health benefits of vegetables and how to prepare them in simple, unique, affordable, and most importantly, delicious ways,” says the program on its website.

Suriano, who has worked in school food service for much of her life, said the idea for Veggiecation was sparked when she realized that just putting vegetables on school menus wasn’t enough to get children to enjoy them.

“We would put vegetables on the table and kids wouldn’t eat them,” Suriano said. “Then we would have a food waste problem.”

Suriano recognized that school food programs needed an educational element to improve kids’ familiarity with healthy foods. The idea started out as a way to “market” these healthy vegetables to kids.

“All of these [snack food companies] had ad campaigns for junk food,” Suriano recalled. “So I thought, why can’t I have one for healthy fruits and veggies?”

When she tried to bring nutrition education into the classroom with a Classroom Companion program, however, she realized that schools didn’t have the budget to support it, or an incentive to put it into the curriculum because there wasn’t any standardized test for nutrition.

She decided to take a different tack, and in September of 2011, a Whole Foods on the Upper West Side in NYC asked her to teach a cooking class for kids. 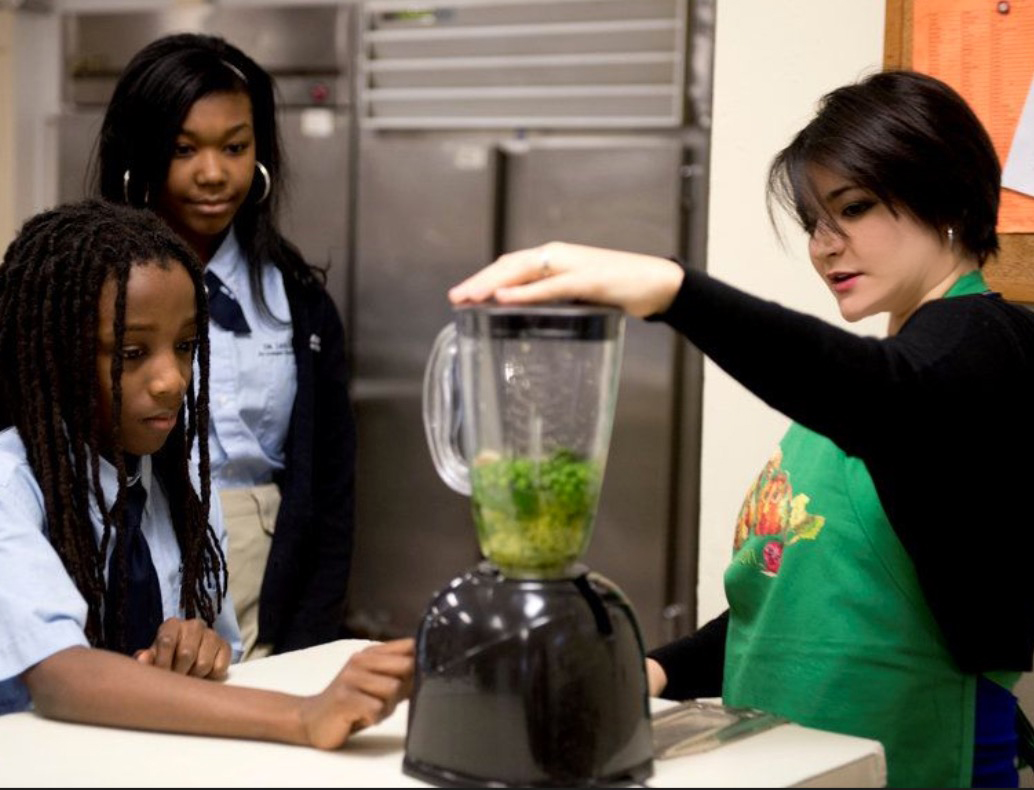 During the Veggiecation classes, students participate in activities like coloring and games, as well as getting to know vegetables with Veggiecation’s 36 vegetable characters designed by artist Lauren Roth.

“Mainly, it’s about getting kids hands-on with raw vegetables,” said Suriano, adding that it can take numerous exposures to a new food before a child feels comfortable with it.

“When kids are first trying new food, they take up to 20 times to eat it,” dietician and nutritionist Tamara Melton told the Atlantic in 2015.

As an example, Suriano said, the class might learn about basil by holding the raw herb in their hands and feeling it before doing a hands-on demonstration making basil pesto or basil rice noodles.

“We get kids hands-on at every stage of cooking,” Suriano said.

All of the recipes made by Veggiecation are plant-based, both for food safety reasons, and because veggies are often a more cost-effective option.

Some of the recipes they’ve made include green smoothies, a Magenta Dip with white beans and raw beets, and an Emerald City Dressing that Suriano said tries to use every part of a radish.

From the first cooking class at Whole Foods, the Veggiecation program eventually went on to include classes at 23 Whole Foods locations, along with Girl Scout Troops and even birthday parties.

At a certain point, Suriano said, it was too much for one person to do, so she began to train other instructors to teach the classes as well. She also managed to bring the program back into the classroom with the support of the NYC Department of Education’s wellness programs. 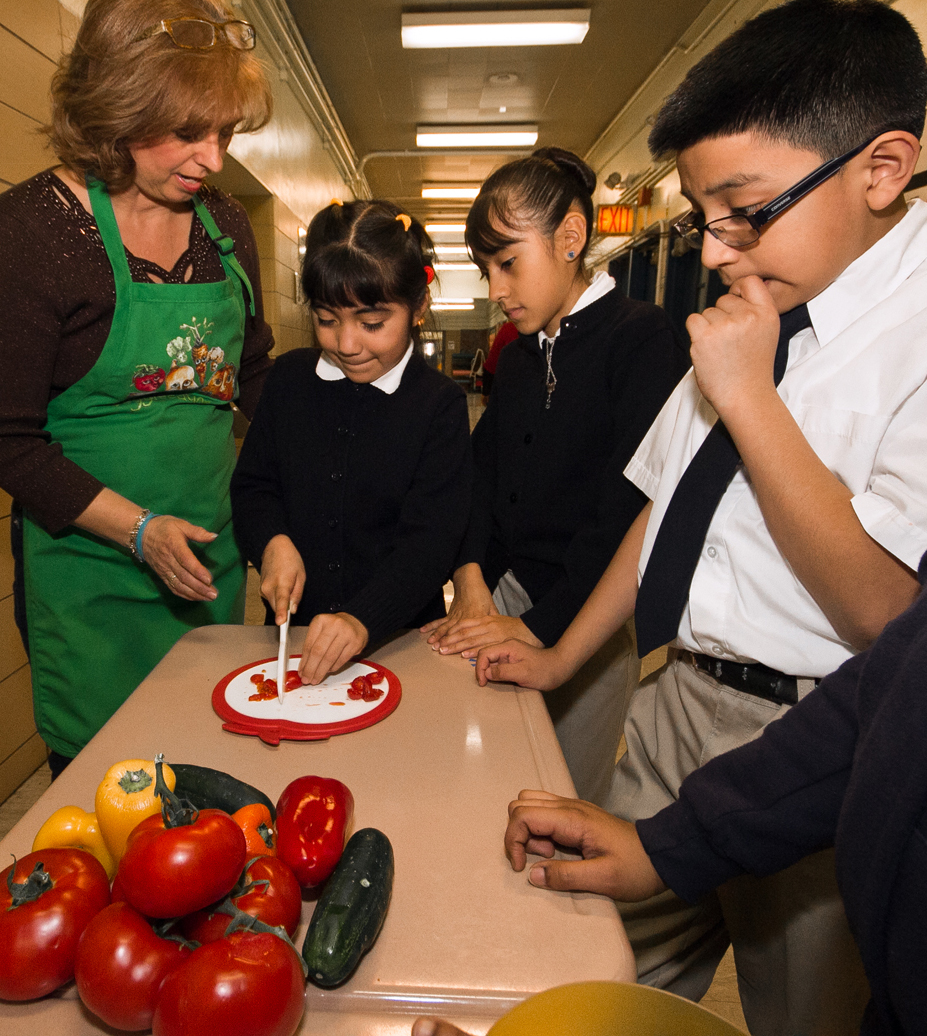 Veggiecation has worked with schools including PS 146 in East Harlem, PS 55 in the Bronx, PS 75 in the Upper West Side, and the Bronx Children’s Museum.

Going forward, Suriano hopes to train more people around the world to become “Veggiecators” and start a Veggiecation program in their area. She’s worked with teachers in California, Ohio, Florida and other states, as well as Canada. She’s also worked in the Dominican Republic, the U.K., and South Africa.

Michelle Obama’s Let’s Move! Program offered support and momentum for Veggiecation, and Suriano said that she wanted to keep the program growing with more training and classes.

“In the current climate, I think Veggiecation’s mission is more important than ever,” said Suriano.

You can get involved with Veggiecation by training as a Veggiecator to start your own classes in your area.

If you’re looking to eat more healthy whole foods, check out this guide to shopping for inexpensive whole foods. You can use simple veggies to make this Sesame Orange Sweet Potato, these Indian Golden Mashed Potatoes With Curried Gravy, and these Roasted Spiced Carrots.