7 Reasons You Should Plant a Mulberry Tree

First of all, let us be clear that, despite what any childhood songs may have suggested, the mulberry grows on a tree, not a bush. In fact, it can be a humongous tree. If left to grow wild, some varieties can easily get upwards of 80 feet high, with a large spreading canopy that will engulf a suburban lawn in shade. In other words, though other berry plants might grow low to the ground and make lovely hedges, mulberries are something else altogether.

Now, truth be told, mulberries aren’t nearly as known as other berries, and to many who do know them, they have a speckled reputation. The berries are known to stain driveways. The trees are known to reproduce like weeds. The trees are also infamous for attracting insects and creating pollen. Even so, for permaculture practitioners, the hard-nosed mulberry is often amongst the top trees to include in a garden.

Berry bushes are known for supplying quite a lot of food, so imagine what happens when a three-foot bush expands into a fifty-foot tree. Mulberry trees are insanely productive, some of them giving a couple hundred pounds of fruit a year. The reason we don’t see mulberries so much in the market place is that they tend to bruise and leak easily, making them not so commercially viable. 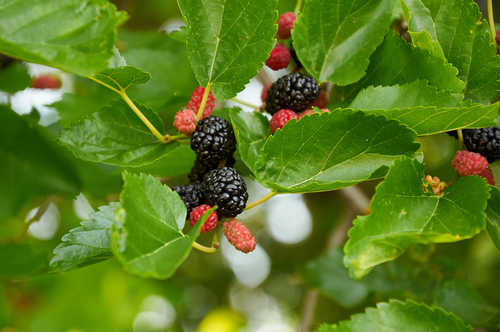 At home, however, we can pick them for ourselves and enjoy the huge harvest. The berries can be eaten soon after harvest, or they can be frozen and stored for later. They work well dehydrated. Like any berries, they suit pies, ice “creams” and yogurt perfectly, or the frozen berries can be blended into a delicious sorbet. They can also be used to make homemade wine. Not having enough mulberries is rarely a problem when there is a mature tree in the yard.

Not only are the berries in abundance, but mulberry leaves are actually edible as well. They can be used in salads, and it is also quite common to use them similarly to grape leaves, creating “stuffed” leaf recipes. In some cultures, they are well respected for medicinal value and have been known to help with blood glucose levels. However, it is very important to note that mulberry leaves must be cooked before they are eaten.

Mulberry trees, unlike some other productive crop trees, are renowned for their ability to shoot up quickly. Most trees take about five to ten years to begin bearing fruits; however, there are some varieties that’ll start producing within the second year and slowly give more as it nears maturity, roughly ten years. The tree itself gets bigger quite quickly, providing plenty of shade and reward for cultivation efforts.

Mulberries come in quite a large variety, and odds are, wherever you live, there is a mulberry that performs well in that climate. They are known to work from zone three to zone nine, with only the hot tropics and arid deserts being a real challenge. They are drought-resistant, withstand temperatures dipping into the negatives, and can be a little brittle in really heavy winds. Mulberries are big, beautiful trees that work in most places.

Because they are so abundant and delicious, mulberries are quite popular with wildlife, especially silkworms, insects, and birds. Many planters will use them to distract wildlife from their more finicky production crops, or nature lovers might simply want to attract birds to their property. Whatever the case, mulberries produce enough fodder for the birds (the berries and bugs), the silkworms (the leaves), and people (the berries) to have plenty. 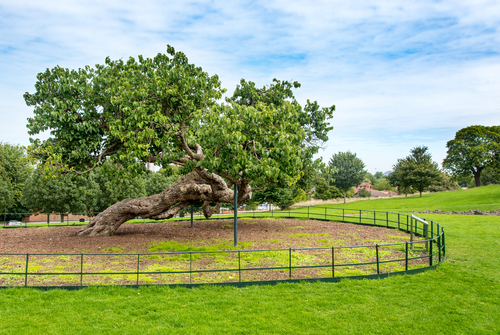 Mulberries, being tall and sprawling trees, are great for providing a shady spot. They’ll grow up quickly and cover a corner of the yard, creating a strategic spot for some hammock-with-a-book time. What’s more is that they are deciduous, loosing their leaves in the winter, so they produce shade in the summer, when it’s needed, and let the sun in during the cooler season, when more warmth is needed.

For some, mulberries aren’t the most beloved. They are sometimes known to be invasive, multiplying when birds deposit their seeds everywhere, and the berries can stain surfaces. However, put in the right place, put in a new garden, the trees grow fast, provide a lot of food, intoxicate the surrounding wildlife, and generally allow for some early success with food cultivation.