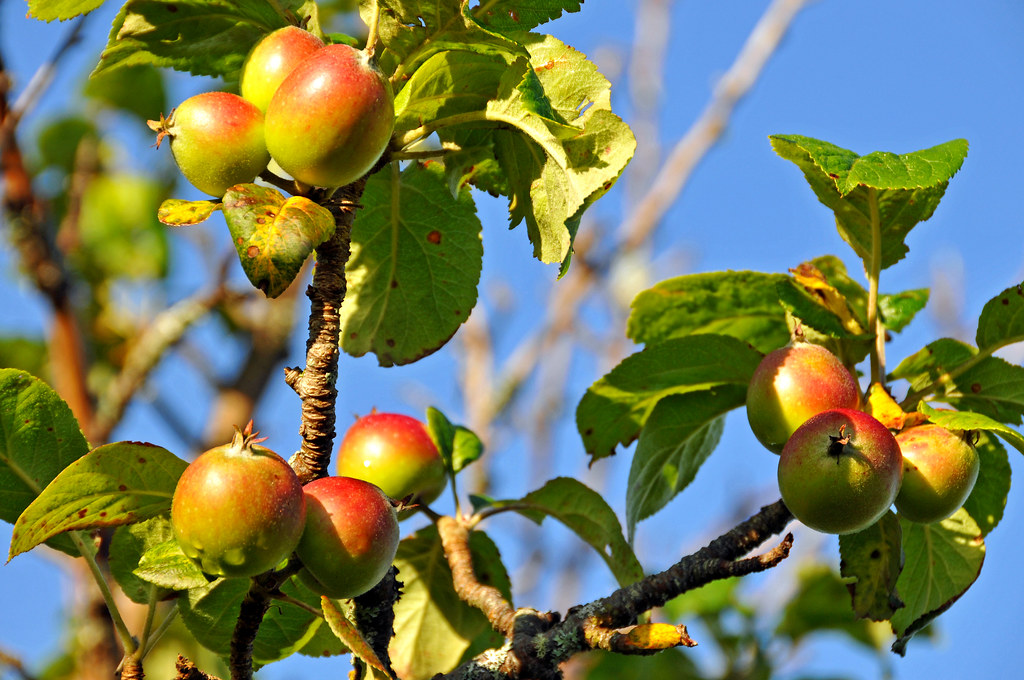 While it’s true that established and guided cultivars often produce milder, more crowd-pleasing fruits, there is something to be said for native, wild fruits. In addition to having bolder flavors (as fruit) and easy-going demeanors (as plants), they are also long-standing pieces puzzled into the North American ecosystem.

For those wanting to plant edible landscapes and/or use native plants, knowing what fruit-bearing trees are at your disposal is half the task. When we choose the right trees for the climate and pick wild species that have thrived for centuries, finding success in the garden increases exponentially.

Many places in the United States have a host of fruit-producing trees that simply belong in the landscape. Isn’t that amazing! We are already accustomed to nut-producing groves with native trees like acorn, pecan, and hazelnut, and now we can start adding native fruit trees to the food forest.

Part of the Malus genus, which includes our commercial orchard apples, several varieties of crabapples—Southern, Sweet, Prarie, Pacific—are native to North America and the United States.

Southern crabapples (Malus angustifolia) grow from Florida up the east coast to New Jersey and as far west as Texas. Pacific (aka Oregon) crabapples grow from Northern California to Alaska. Sweet crabapples thrive around the Great Lakes and Ohio Valley.

Crabapple trees grow to about 30 feet tall, and they produce an abundance of small, astringent fruits that can be used to make jam, preserves, and top-notch hard apple cider.

The tree itself is native to the eastern side of the US, from Texas to the Atlantic and all the way up to Connecticut. They grow somewhere between 30 and 80 feet tall and have extremely hardwood.

Persimmons are a special treat because, without a tree, it’s rare we get to enjoy them. They have to be very ripe and soft to lose their astringency, after which they are incredibly sweet and reminiscent of caramel.

The largest fruit native to the contiguous United States, the American pawpaw grows from New York to Nebraska and all the way down to the Gulf of Mexico.

Like persimmons, they have a finicky ripening season and don’t transport well, so it’s much easier to enjoy them from the tree. That said, they have been making a comeback of late, showing up in fancy restaurants and farmers’ markets.

The pawpaw tree grows up to about 35 feet tall, and its fruit is enjoyed by a plethora of mammals, including humans, raccoons, foxes, and black bears.

From the genus Morus, varieties of mulberry trees are native throughout the world. The red mulberry and Texas mulberry are species native to the United States.

Red mulberry (Morus rubra) grows everywhere east of the Mississippi, as far north as Minnesota and Vermont, and in a few states—Kansas, South Dakota, Texas, Nebraska—west of the river. Texas mulberries (M. celtidifolia) grow throughout South America, Central America, and all the way to the Southwestern states.

Mulberries tend to bruise and bleed easily compared to other berries, so they are easier to enjoy direct from the tree. They are delicious and sweet when raw, and they make fine jams and wine as well.

While we are very familiar with several domesticated cherries these days, wild cherries are still part of the US landscape. We have two varieties: Black cherries (Prunus serotina) and chokecherries (P. virginiana).

Black cherry trees are distributed largely in the eastern half of the United States, from East Texas to the Atlantic and into the northern reaches of New England and the Midwest. Chokecherries overlap the entire boundary with Canada, and extend into Oregon and California on the Pacific Coast.

Though both of the native cherries have a notably bitter taste, they are beloved by wildlife and they make for fantastic pies. The trees are also commonly used as ornamentals.

Source: Give it a Grow/YouTube

The American plum (Prunus americana) is a close relative to cherries, and another wild stone fruit that grows in North America, particularly in the cooler regions of the American South all the way into Canada.

They are small, beautiful trees that get to be about 15 feet tall and bloom pretty white flowers in the springtime.

The fruits are delicious fresh but also make nice jams and jellies, and wild animals love wild plums to boot.

Members of the rose family, hawthorns are in a genus (Crataegus) with several hundred species of plants. Many of those are native to the United States and North America, and one or more varieties will grow wherever you are.

Hawthorns can be trees or shrubs, but they tend to have thorns and hard wood, which has made them great for windbreaks and living fencing.

The “haws” are used to make jams, preserves, and punch. In Mexico, the fruit is made into a paste to produce candy.

These are just some of the native fruits that can be included in those suburban lawns and urban food forests. We still haven’t delved into elderberries, serviceberries, grapes, blackberries, raspberries, blueberries…we can save that for another time.