10 Contemporary South Asian Artists You Must Know About and Support! 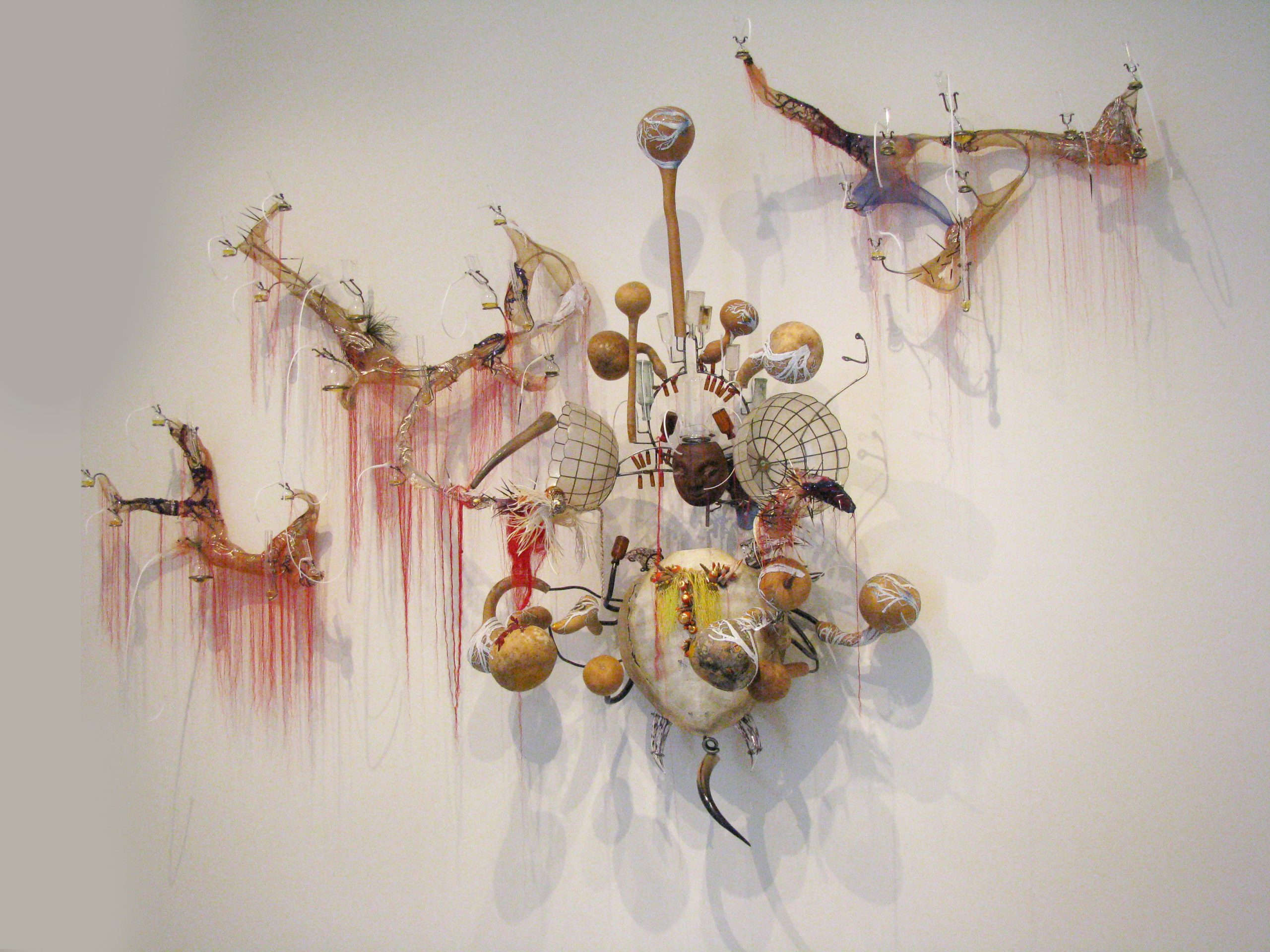 Unfortunately, the art world is largely white-washed, whether that be in prominent museums, small galleries, or the curricula of art history classes. As One Green Planet’s founder, Preeta Sinha, says, “There is no shortage of diverse artists. There is, however, a lack of thoughtful intentional sourcing and true representation is lost in the illusion of inclusion. I challenge the decision-makers in the art world to go beyond lip service.”

As a follow-up to our article featuring incredibly talented Black artists, this article focuses on 10 South Asian artists everyone should learn about! South Asia is an incredibly diverse region that is full of complex cultural histories including numerous languages, ethnicities, and religions. Some of these artists are inspired by traditional South Asian art, others draw from personal anecdotes, and still, others are informed by their experiences living as a person of color in America or European countries, all of which have a history of xenophobia and imperialism. Learning about a diverse range of artists is an important way to gain perspective about the world around us, and a great way to start is by learning about the 10 artists listed below!

Rina Banerjee is an Indian-American artist whose work is informed both by her personal experience and broader understanding of migration, multiculturalism, and American Diasporic histories. Among her most distinctive works are her ornate sculptural installations that often integrate a variety of globally sourced materials – including textiles, organic materials, and colonial and historical objects. Her drawings and paintings are inspired by Indian miniature paintings, Chinese silk paintings, and Aztec drawings which is reflected in their figuration, flowing designs, vibrant colors, and vast, white backgrounds. These works also often depict fantastical figures such as witches, demigods, and other beasts.

Rina’s work can be seen alongside Jayashree Chakravarty, Nadia Kaabi-Linke, Suchitra Mattai at Fresh Earth which Opens on March 13, 2021, at Aicon Gallery in New York City.

Salman Toor is a Pakistani artist based in New York City. His work primarily focuses on intimate vignettes of queer brown men living in NYC and South Asia. His figures grapple with these identities, whether that be clandestine affairs interrupted by the police or the xenophobia that lingers at TSA checkpoints. Even in the more romantic vignettes, this tension is palpable. In the video above, Toor himself likens these characters to marionettes who have “forgotten who they are.” Although certain scenes might seem lively, like people gathered at a poetry reading or friends dancing in an apartment, these figures often seem dazed and disconnected from the events surrounding them. This dreamlike haze is underscored by Toor’s distinctive color palette and gestural brushstrokes. While Toor claims that these scenes are made up, he renders them with such charming detail one can easily imagine these events occurring right before them. This interplay between romance and tension, nostalgia and alienation make Toor’s work dynamic and enthralling. Toor’s work is currently on display at the Whitney Museum in New York City until April 4th of this year.

Zarina Hashmi, known professionally as Zarina, was an Indian artist based in New York City who sadly passed away in April of 2020. Zarina’s artistic legacy is, in a sense, her life’s story. Her work was often autobiographical in that it was informed by her identity as a Muslim woman in a minority community following the Partition of India. These themes of relocation and exile are demonstrated by her vocabulary of “maps, abstract geometries, stark lines, and a muted palette.” The beautiful simplicity of her works reinforces the emotion and politics that motivated them. Moving past her ancestry as a Muslim-born Indian woman, her art also references various international cities that she has called home through the years. Such works include floor plans and maps of cities like Paris and New York.

Shamsia Hassani is a graffiti artist in Afghanistan. As she mentions in the video, she proudly paints large-scale art in public spaces to help bring art to the people of Afghanistan, who often “are not able to go to museums and galleries.” Over time, Hassani has developed a unique personal style that typically centers a female subject, often with a guitar or piano. Hassani’s art recontextualizes women’s place in Afghan society, specifically by portraying her women with “power, ambitions, and willingness to achieve goals.” Her art has also added vibrant color and positive messaging to Afghanistan’s post-war landscape. In addition to her artistic career, Hassani is also an art professor at Kabul University.

Huma Bhabha is a Pakistani-American multimedia artist whose impressive, often grotesque work draws from an eclectic range of inspiration, such as science-fiction, ancient Egypt, and even the television series South Park. Bhabha’s monumental sculptures, which she refers to as her characters, lack a clear basis or background. These characters can be read as aliens, gods, pharaohs, or any type of otherworldly beings. Bhabha’s work is also informed by real-world events, particularly those she witnessed growing up in Pakistan. A number of her sculptures grapple with the horrors of war, including the violence of the American troops who terrorized the landscapes of her youth. Ambiguity dominates her works – what could be read as a burqa could also be read as a body bag; postures of death could be postures of supplication, surrender, or prayer.

Atul Dodiya is an Indian multi-media artist whose work deftly crosses stylistic and cultural boundaries. Dodiya’s work is incredibly referential; he draws from a variety of sources, ranging from Bollywood to German modernism. He skillfully intertwines “Western art history with the history, myths, folklore, and popular culture of India.” His eclectic blending of styles reflects his upbringing in Mumbai as well as his formal art education at the École des Beaux-Arts in Paris.

Mequitta Ahuja is an American artist of Indian and African-American descent. In her artist statement, she examines the ways her identities shape her art, both in expectation and in practice. She explains that as a female artist-of-color, she has “internalized the expectation that [she] should mine [her] personal experiences as case studies in the social conditions of race, class, and gender.” However, she explains that in her artistic practice, she at once accepts and moves beyond this expectation. As a painter, she uses materials from a variety of places, which imbues her paintings with a complex culture that traverses time and geography. Ahuja is interested in figure studies, narratives, and self-portraits. While her works aren’t exactly literal representations of the self, they do embody various aspects of herself.

Moshtari Hilal is an Afghan-German artist whose work is informed by personal experience as well as her academic research, which focused on political theory and Islamic studies. Her art is semi-autobiographical and often concerns beauty standards, other-ness, and displaced identities. She often examines features that resemble her own beauty such as black hair, hooked noses, and body hair. Likewise, her work “reflects on the cross-over of cultures and collective identity.” Hilal also co-founded AVAH (Afghan Visual Arts and History), which is a global interdisciplinary research collective that centers “Afghan Visual Culture, inclusive of its diaspora and minorities.” You can keep up with Hilal by following her on Instagram.

Tayeba Begum Lipi is a Bangladeshi artist whose work examines the topics of femininity and gender roles. Throughout her most recognizable sculptures, the razor blade plays a dominant role. She constructs a myriad of objects from these blades, including shoes, underwear, headscarves, beds, sewing machines, and wheelchairs. The razor blade is a significant motif for her; as shown in the video above, she ruminates on its use in many areas as a tool to “cut the baby from the mother,” however, she remarks that the razor blade is a more masculine object. Yet, by using these razors to create mundane objects associated with female domesticity, she confronts the marginalization and violence women face, particularly in terms of her experience as a woman in Bangladesh. A critique of capitalism and consumerism might also be at play here, given that these sculptures are often presented in a boutique setting with hangers, racks, and display stands.

Priyantha Udagedara is a Sri Lankan artist whose work aims to capture both beauty and agony. From far away, his paintings reflect abundance – vibrant flowers, winding vines, and a kaleidoscope of butterflies create the complex compositions. However, closer up, his paintings reveal a more disturbing truth – paint splatters, body parts, syringes, and thorns. The thorns that were once perceived as part of the lush foliage interlace with the unsettling details to accomplish Udagedara’s goal of weaving beauty and agony. He describes this juxtaposition as a response to post-colonial Sri Lanka and how this new reality contrasts with the beautiful Sri Lanka of the past. He addresses other social issues afflicting Sri Lanka, such as in his series Garden of Earthly Delights, wherein he confronts the growing sex industry in Sri Lanka. In these paintings, Udagedara provides a critique of the traditional government organizations that overlook this exploitative and harmful industry along with other forms of gender-based violence. Similarly, in his Paradise Lost series, he hints at the “turmoil beneath what is presented as a Buddhist culture.”