12 Times Street Art Made You Think About the Planet 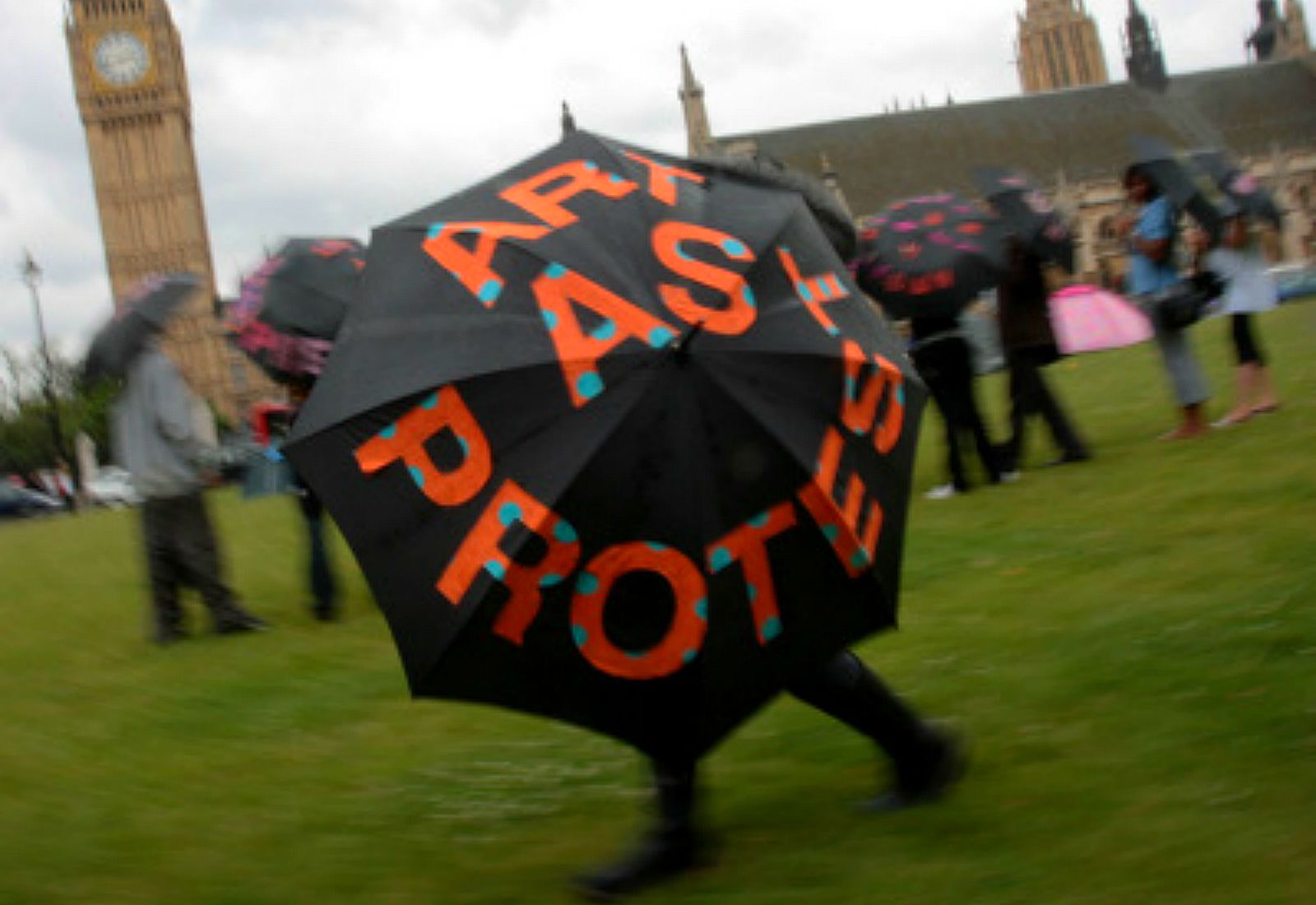 Change seems like a simple thing, doesn’t it? An issue arises that makes you go, “Hey, that ain’t right” and you resolve to change that thing. How tough can it be? Actually, as it turns out, pretty darn tough. We humans are creatures of habit and we most certainly don’t like leaving our cozy little comfort zones. Hey, no finger pointing here, we’re all guilty of it. From the tendency to keep using a product that actually contributes to climate change all the way up the scale to the more ingrained habits like indiscriminate water usage and heavy meat consumption, we sometimes need to be hit upside the head before it dawns on us that we’re actually a part of the issue.

Thankfully, there are uber creative types out there who’re more than willing to do the head smacking for us, though it’s typically done in a more artful way than a physical one. Literally. Artists all around the world are starting to ply their craft in the public forum in the hopes of shaking up our perceptions, planting guerilla-style installations and clandestine graffiti murals in cities near and far (some as far away as the bottom of the ocean) in an effort to open our eyes to the issues we’ve been ignoring all around us.

Which is exactly what makes the work of these epic badasses so incredible. Sure, art in and of itself serves to make us feel and think, but these paintbrush-wielding rebels force us to examine the world around us. We can’t help but be inspired by their work, which – in the end – is exactly how that tricky little thing called change finally comes about. Once inspired, we’re the ones who actually have the power to address the problems laid out so plainly in the work we see. We become the instruments of change so longed for in every spray of graffiti. That, in and of itself, is a profound bit of artistry. 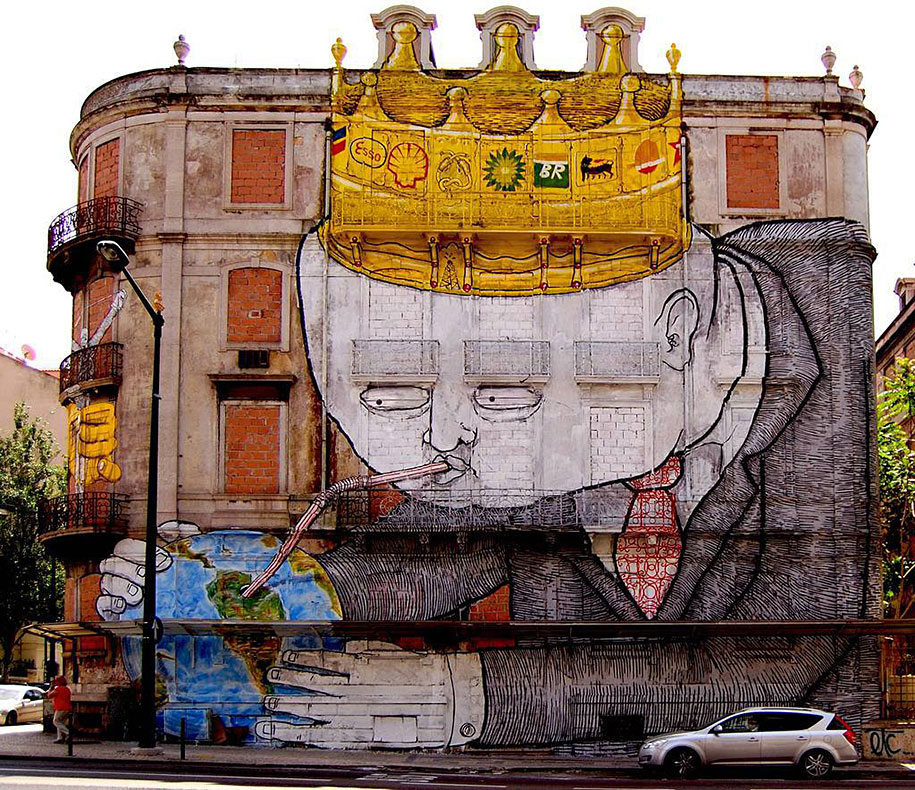 Our finite resources are, well, finite – which means that once they’re gone they’re gone. We can’t run to the corner store to just pick up more. It’s game over, which is exactly the message that graffiti artist Blu set out to convey with his mural depicting a lordly representative of Big Oil quite literally sucking the earth dry.

Not only is our dependence on fossils fuels a large contributor to climate change, but the environmental damage caused by oil operations, particularly when they spill, are catastrophic to the ecosystems that they impact. 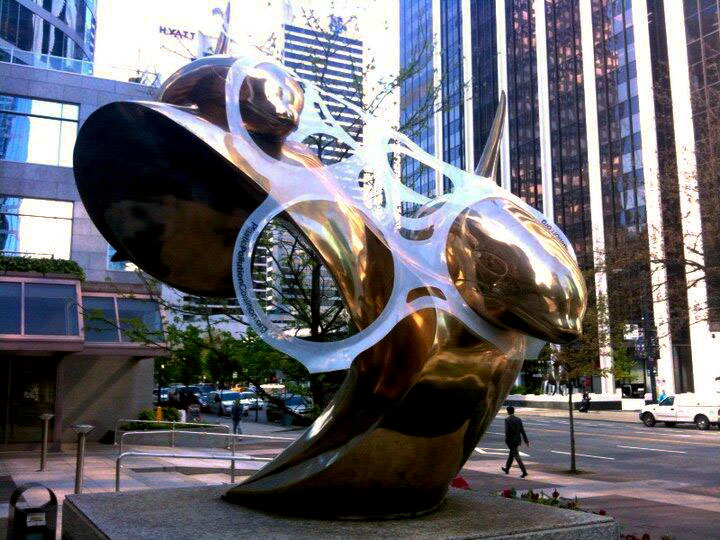 Located in Vancouver, British Columbia, this wildlife sculpture in a busy downtown area got the plastic pollution treatment that so many members of the real life animal community have been treated to over the years. Sporting a tag from the environmental group the Plastic Pollution Coalition, whose motto is Refuse, Reduce, Reuse, Recycle, this installation immediately showcases just how detrimental even the most mundane plastic items can be.

From microplastics contained in clothing fibers and the microbeads found in beauty products to bottles, bags and other detritus, our oceans are quite literally choking to death from the overuse, overproduction and improper disposal of this material. 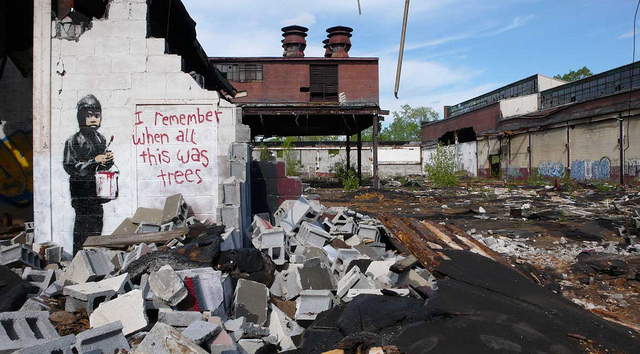 Ah, Banksy. It seems as though there isn’t a person alive today who’s unaware of his work. He’s seemingly everywhere, always at the ready to shine a light on the social and global issues that affect us today. The environment seems to be a particular favorite when it comes to this mysterious artist’s subject matter and, sadly, he has plenty of fuel there to power his creativity.

Like this piece that instantly causes us to reflect on the loss of our woodlands and forests as urbanity continues it’s relentless push, dwindling habitats for indigenous animals and removing valuable trees in place of buildings, homes and parking lots (thanks, Joni Mitchell?). 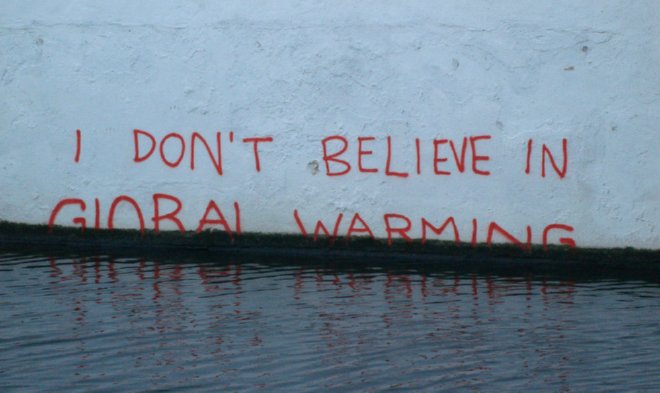 Seeming to slowly disappear as the sea levels rise to swallow its denial, this message from Banksy takes a mocking tone in demonstrating just how ridiculous it is to deny something happening right in front of us.

Yup, you guessed it, more Banksy 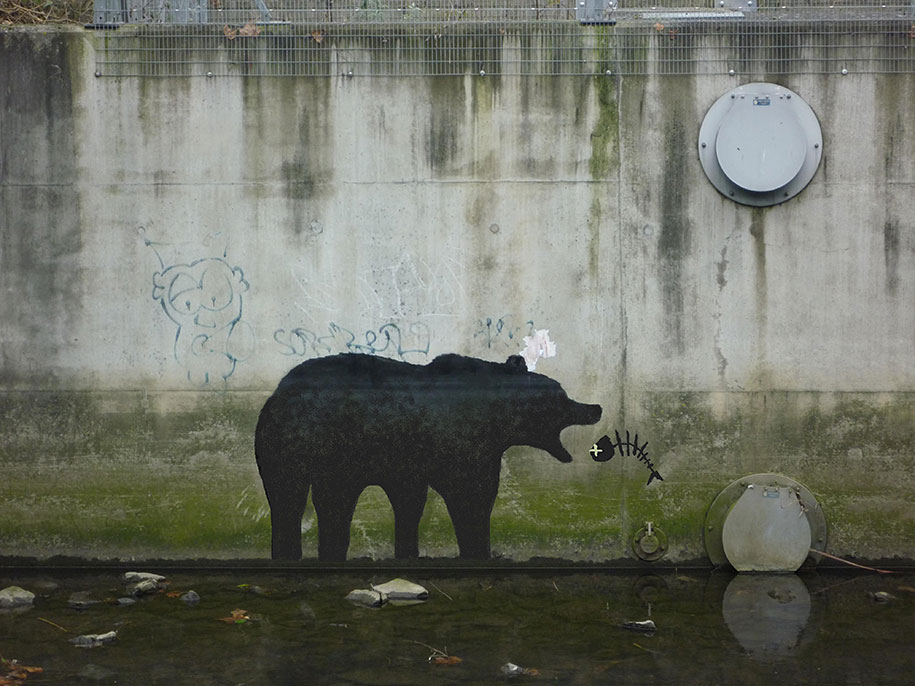 What can we say, the man is prolific when it comes to not only picking a poignant image about the environment but also placing it in the perfect setting for maximum impact. Here, polluted water serves as a backdrop to an image of a bear suffering from a lack of food. Capriciousness about protecting our waterways makes this piece incredibly thought provoking as it illustrates not only how polluted water impacts the organisms living in it, but the organisms that rely on them for survival. 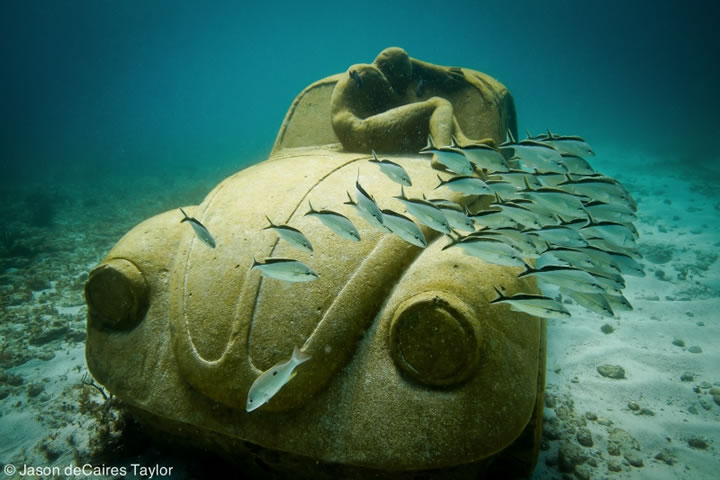 The cool thing about Jason deCaires Taylor’s work is that it not only serves to inspire thought about the environment, it also works to improve it. Creating large installations that serve as artificial reefs, Taylor is credited with creating the world’s first underwater sculpture park off the west coast of Grenada – an installation classified as one of the 25 Wonders of the World by National Geographic. He has a second installation off of the coast of Cancun, Mexico that boasts over 500 pieces and one in the Bahamas that stretches over five meters as well.

These works are meant to be assimilated into their environment and to enhance it, a goal that the artist feels should be one that human-kind should strive for. His hope is that his work will promote environmental awareness and cause those who view it to consider their ability to contribute to our delicate ecosystems in a positive way. 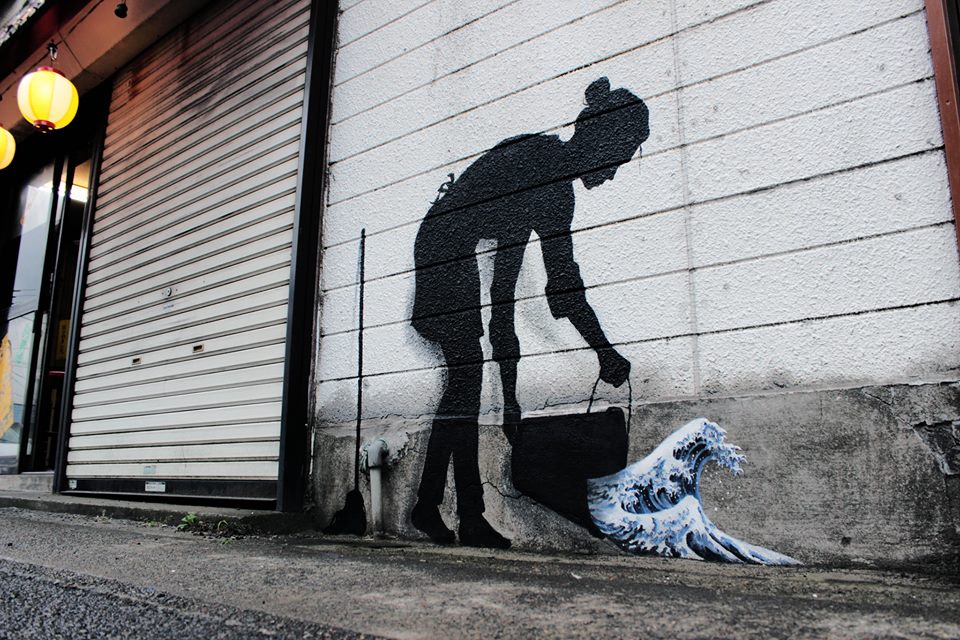 Found in Kawasaki, Japan, this mural by Spanish artist Pejac shows the ocean in all of its dynamic and powerful glory quite literally being discarded by a faceless, nebulous person. This could be any of us, and as it turns out, it actually is. With water insecurity proving to be a huge problem across the globe, conservation of this finite resource is finally gaining the attention that it deserves.

While individual usage must be considered if we’re going to help curtail the problem, corporate usage (namely that of factory farms) must be addressed immediately if we want to make a real impact. 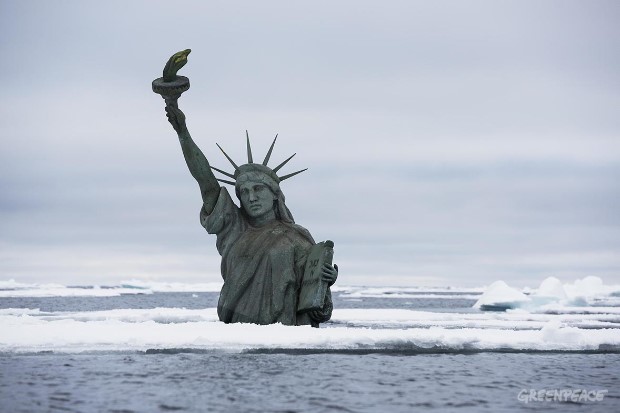 Placed in the Arctic ocean in advance of the Climate Change Summit held in New York, Greenpeace gave us all a pretty intense visual of what rising sea levels and melting polar ice can look like by partially submerging Lady Liberty in the frigid waters. It looks like something out of a dystopian sci-fi movie. 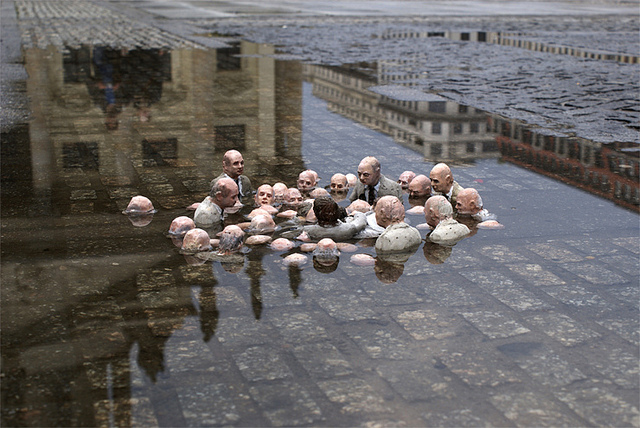 Sometimes it feels like politicians are in a little over their heads when it comes to climate change. Well, according to this micro-sculpture by Isaac Cordal, that could end up being a literal reality. Depicting a group of political figures debating about the effects of climate change as those very effects are all around them, Cordal not only raises the point that debating the reality of an issue doesn’t make it go away but that if we don’t take action, a bunch of talk will lead us nowhere. 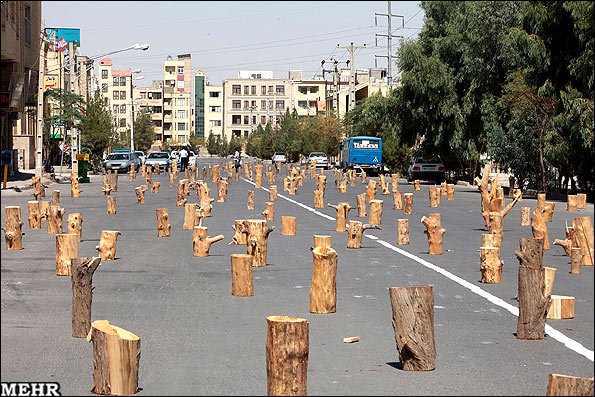 Deforestation is happening across the globe at an alarming rate, and the results are potentially catastrophic. Thus the inspiration for this protest piece by UK artist Angela Palmer. Making room for urban sprawl, harvesting trees for lumber and clearing alarming swaths of the Amazon to make room for cattle production have left us with fewer and fewer trees.

Not only does the actual process of cutting them down contribute to rising earth temperatures in and of itself, but it also robs the planet of their carbon cleansing ways. That’s a one-two punch in favor of climate change and it’s happening every day. 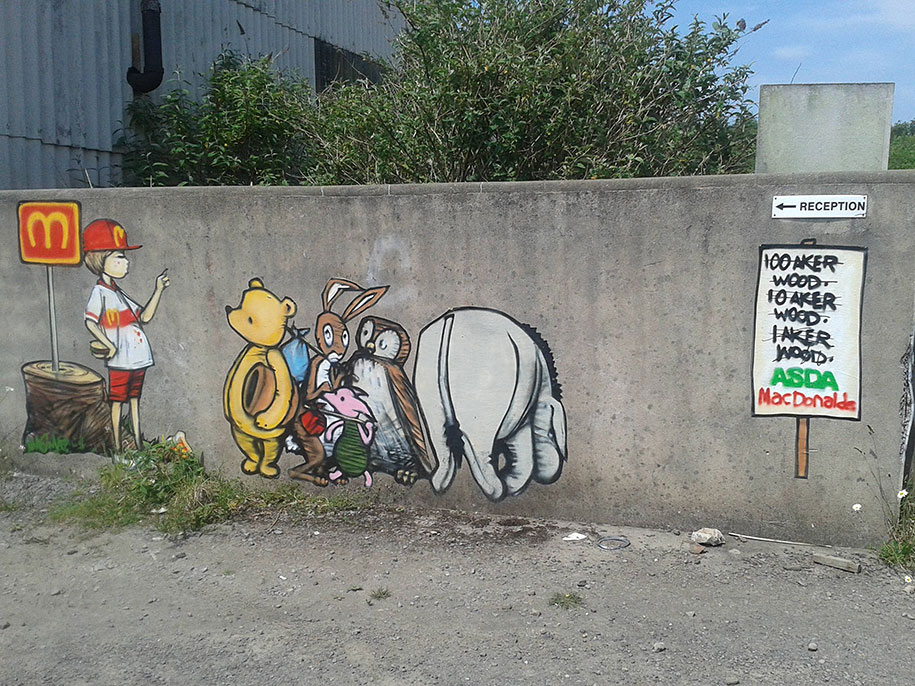 Oh man, Christopher Robin has turned into a little bit of a jerkwad. In this work (largely believed to be the work of graffiti artist Mau Mau) which appeared in Bideford, North Devon, the inhabitants of the 100 Acre Wood seem to have been subjected to systematic habitat loss as their acreage dwindled down to nothing – eventually resulting in the addition of just one more chain dotting the landscape.

Habitat loss is a huge cause behind the dwindling numbers for a variety of endangered species (pandas, tigers and elephants to name just a few.) Lack of food, harm from humans and the removal of viable places to shelter end up being the norm for these animals until they cease to exist entirely. 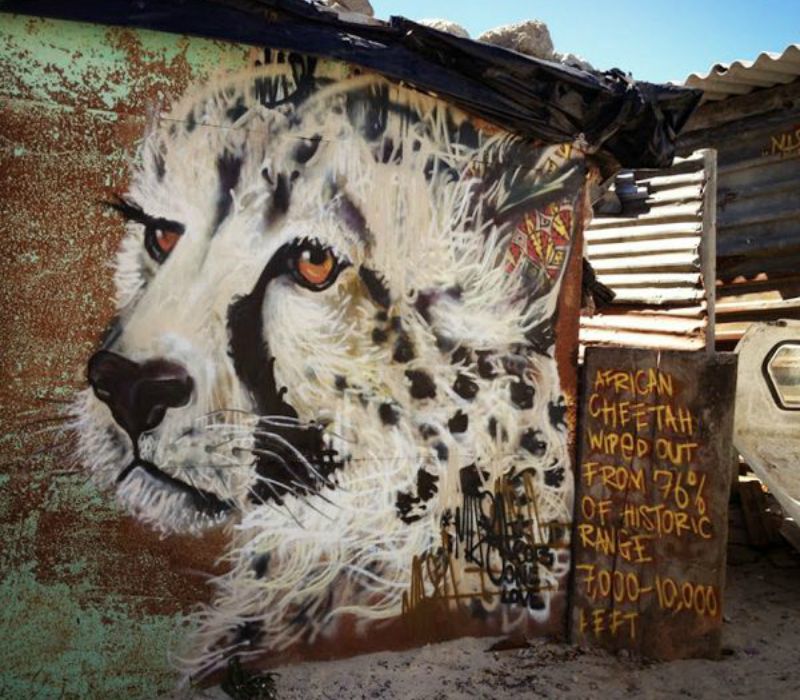 As a result of climate change, habitat loss, and poaching, the earth is beginning to lose animal species at an alarming rate. Painter Louis Masai Michel recently took to the streets of London to give face to a selection of species who’re particularly at risk.

Hopefully, work like his (and that of all the artists shedding such powerful light on their plight) will inspire people to make the changes that will keep these animals around for the long haul. If not, all we might have left are these paintings.