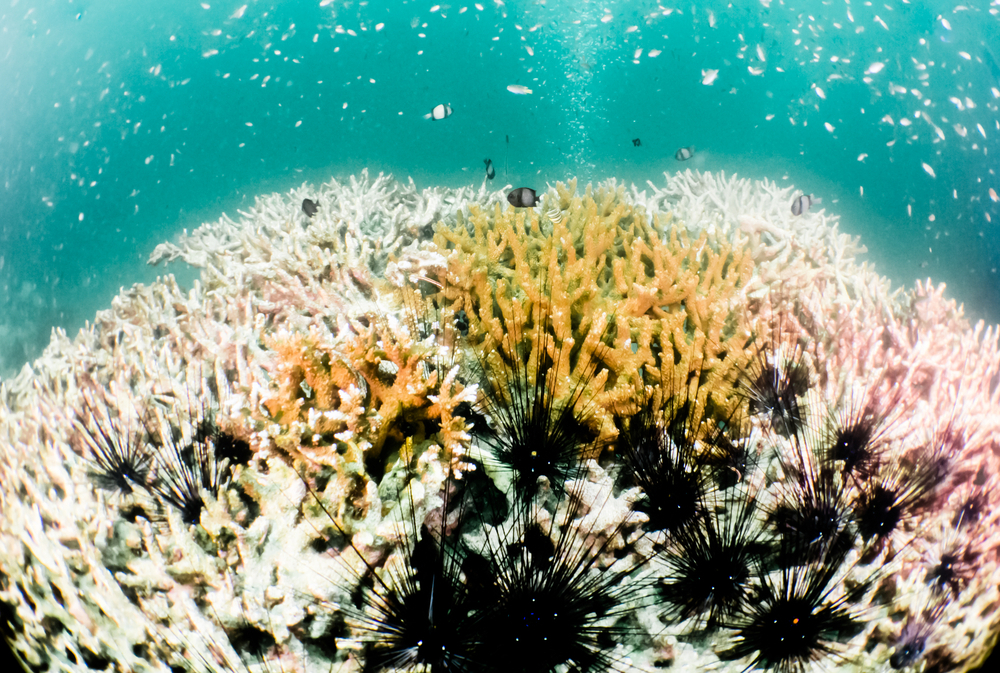 We’ve all been told to always, always wear sunscreen when out in the sun for long periods of time. Although sunscreen is a great protectant from UVA (these cause aging) and UVB (these cause you to burn) rays, some sunscreens have ingredients in them that are harmful to ocean health and human health. In fact, scientists believe oxybenzone, a chemical found in more than 3,500 sunscreens and other cosmetic products, is causing serious damage to coral reefs and coral.

Our Coral Reefs Are in Danger

In a study published in the journal Archives of Environmental Contamination and Toxicology, this ultraviolet-absorbing compound in sunscreen was found to have toxic effects on young coral that causes endocrine disruption, DNA damage to the coral, and even coral death, among other the problems. Oxybenzone also heightens coral bleaching, a process in which coral lose their color and reject symbiotic organisms. Bleaching has been particularly present in recent years due to rising sea temperatures.

According to the U.S. National Park Service, somewhere between 4,000 and 6,000 tons of sunscreen enters coral reef areas around the world each year. That’s a shockingly high amount of sunscreen considering how little it takes to cause toxic effects. Toxicity occurs at a concentration of 62 parts per trillion, according to a new study. Just to give you an idea of what this looks like, author and researcher at Tel Aviv University Omri Bronsteinthat, claims this is like a drop of water in an Olympic swimming pool.

Beyond the impressive appearance of coral reefs, they play an important role in local communities and the world at large. Firstly, they contribute to local economies through sustaining ecosystems where people can fish. Additionally, coral reefs foster tourism. An estimate released by the National Oceanic and Atmospheric Administration put the economic contribution of coral reefs around the world at $30 billion each year. Perhaps most importantly, coral reefs protect the global environment by serving as carbon sinks, where they absorb carbon dioxide and alleviate climate change.

It’s a Health Issue, Too

In a study conducted by the Center of Disease Control, 97 percent of Americans are contaminated with a widely-used sunscreen ingredient called oxybenzone that has been linked to hormone disruption, cell damage, and allergies. Additionally, the Environmental Working Group found that sunlight causes oxybenzone to form free radical chemicals that may be linked to cell damage. Oxybenzone is also linked to low birth weights in baby girls whose mothers were exposed to it during pregnancy. Another active ingredient in sunscreen, octionoxate, has been linked to acne, contact dermatitis, and rashes from allergic reactions.

Synthetic fragrance or “parfum” is another health-harming ingredient that may be used in conventional sunscreens. Full of toxic petroleum, which is a coal-derived synthetic chemical, fragrance is an ambiguous term for whatever secret ingredients manufacturers want to add. According to a 2009 study called “Fragrance in the Workplace is the New Second-Hand Smoke” by the University of Maryland, researchers Christy De Vader and Paxson Barker found that the problem with fragrance is not its scent but rather the synthetic chemicals derived from petroleum and tar:

“Over the past fifty years, 80 to 90 percent of fragrance ingredients have been synthesized from petroleum and some of the commonly found harmful chemicals in fragranced products include acetone, phenol, toluene, benzyl acetate, and limonene.”

Shockingly, a small 800 of the approximately 4,000 chemicals used as fragrances have been tested for toxicity, either in combination with other chemicals or alone. These chemicals are so harmful to our health that the U.S. National Academy of Sciences has grouped fragrances with heavy metals, insecticides, and solvents in the same categories of chemicals that need neurotoxicity testing.

Not just a few but all of these toxins cause central nervous system damage. Physical reactions to fragrances are categorized as:

Now don’t go thinking we are encouraging you to stop wearing sunscreen. You absolutely should wear sunscreen to protect yourself against skin cancer. But what we are encouraging you to do is to consume consciously when buying sunscreen. Sunscreens with zinc oxide or titanium oxide have not been found to harm reefs, according to the National Park Service. Additionally, these two ingredients have not been found to affect human health negatively. Beachgoers and sun lovers can also cover their upper body with long sleeve shirts or similar apparel to reduce sun exposure and sunscreen use. To access a list of some of our top pics for health conscious and environmentally sustainable sunscreen brands, follow this link.