Animal agriculture certainly takes an enormous toll on our planet. It consumes around 70 percent of the Earth’s freshwater supplies, and the United Nations Food and Agriculture Organization (FAO) estimates that livestock production is responsible for 14.5 percent of global greenhouse gas emissions while other organizations like the Worldwatch Institute have estimated it could be as much as 51 percent. Not only that but it also occupies around 50 percent of the world’s land. This destructive industry is also having a devastating impact on wildlife. In the U.S. alone, livestock grazing impacts 14 percent of threatened or endangered animals, but some of the most frequent victims of livestock expansion are the wild horses.

In the U.S., wild horses have been particularly hard hit by the meat industry’s demand for more land on which to raise cattle. In recent years, The Bureau of Land Management‘s (BLM) practice of “rounding up” horses using cruel helicopter-driven chases has drawn widespread criticism from animal advocates and concerned members of the public, who know how this traumatic practice impacts animals.

The BLM has continuously maintained that the roundups are “necessary and justified,” with Joan Guilfoyle, head of the Wild Horse and Burro Program, insisting that the numbers of wild horses on U.S. land doubles every year and that the herds must be thinned out to preserve ecological balance. She said, “If we stopped gathering animals, the population would continue to grow and grow and the rangelands would continue to be overgrazed.”

This picture by the Wild Horse Freedom Federation reveals the heartbreaking reality of roundups. 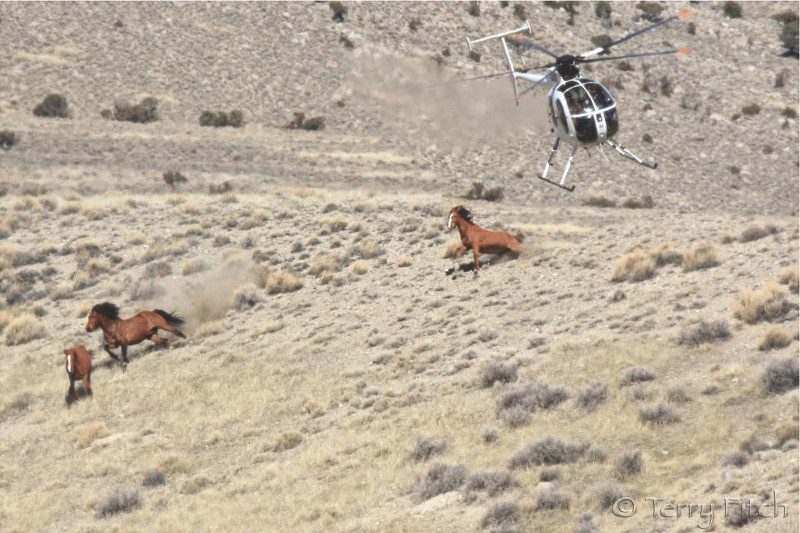 Under federal law, wild horses are supposed to be protected as “living symbols of the historic and pioneer spirit of the West; that … enrich the lives of the American people.” But Laura Leigh of Wild Horse Education – who has spent 500 days observing the roundups – stated, “It’s my observation that the government continually violates the provision of the act that requires humane handling of these animals. … I’ve seen broken legs. I’ve seen legs ripped up by barbed wire. I’ve seen horses kicked in the head. I’ve seen animals dragged by the neck with a rope. I’ve seen a helicopter hit horses.”

Once the horses have been captured, they are often sent to live in captivity or put up for auction (where most end up being sold for meat). The separation of families, friends, and even mothers and babies is a routine occurrence. There have also been a number of recorded cases of BLM contractors selling the horses to slaughterhouses. It is an unspeakable tragedy that wild horses – the animals traditionally regarded as an emblem of freedom, beauty, and grace – are being subjected to this treatment.

However, by leaving meat off your plate, you can take a stand against this outrageous practice. With a lower demand for meat, less land will be required for cattle ranching, and fewer wild horses will suffer. To learn more, read some of the articles below:

For more information about how your food choices can positively impact the planet and all the animals who live on it, check out the Eat For The Planet book!