After Surviving Wild Horse Roundup, Majestic Stallion Gets a Second Chance at Freedom 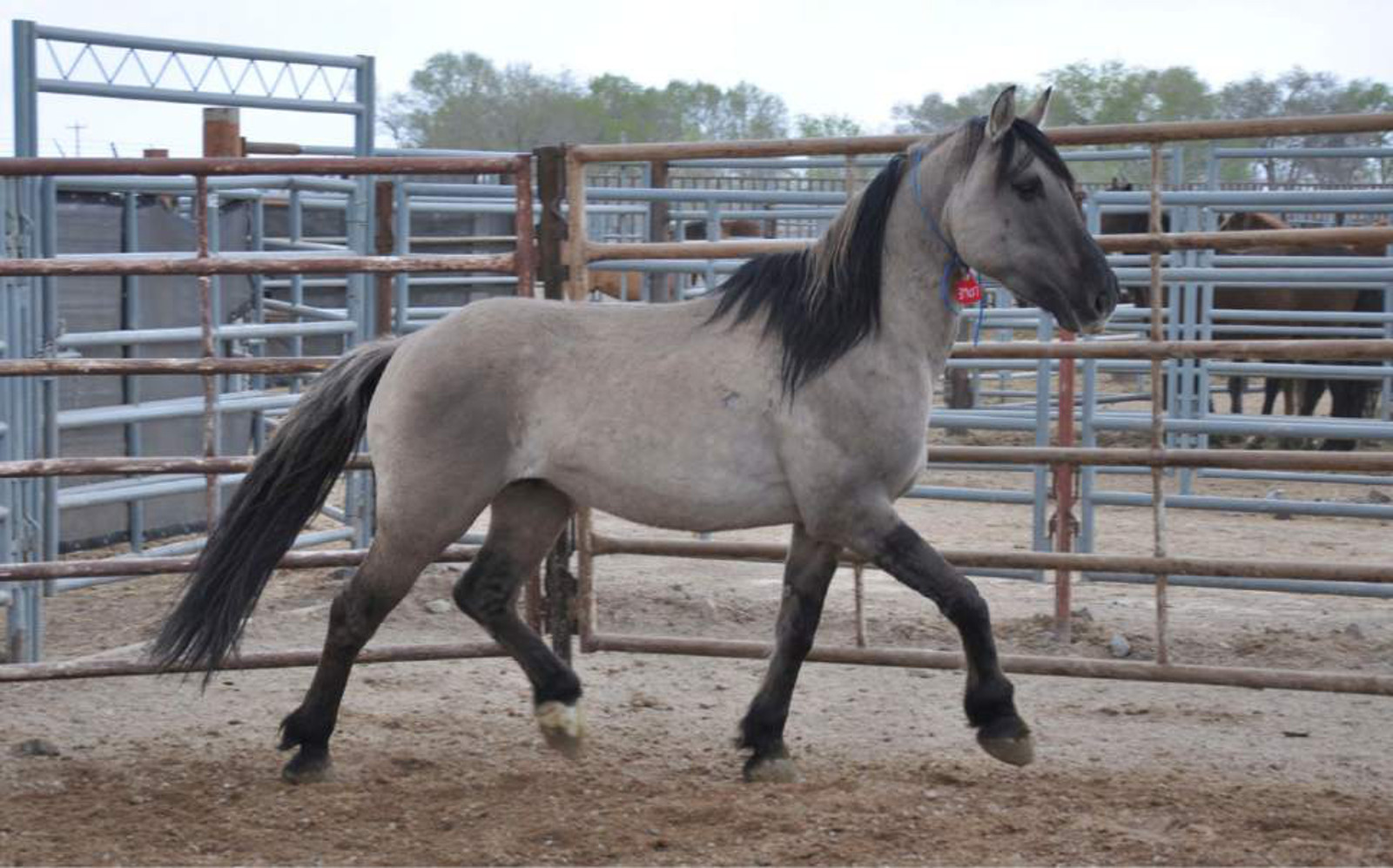 In April of this year, the future looked grim for Grulla Stallion #3907, a magnificent 26-year old, dark dun-colored mustang who was captured in a Bureau of Land Management (BLM) roundup in the Sulphur Springs Herd Management Area. This proud stallion had lived his entire life wild and free in the rugged high desert of Utah.

When the helicopters came to capture him in February 2015, he fought fiercely against them, even escaping the trap and leading others to freedom with him. 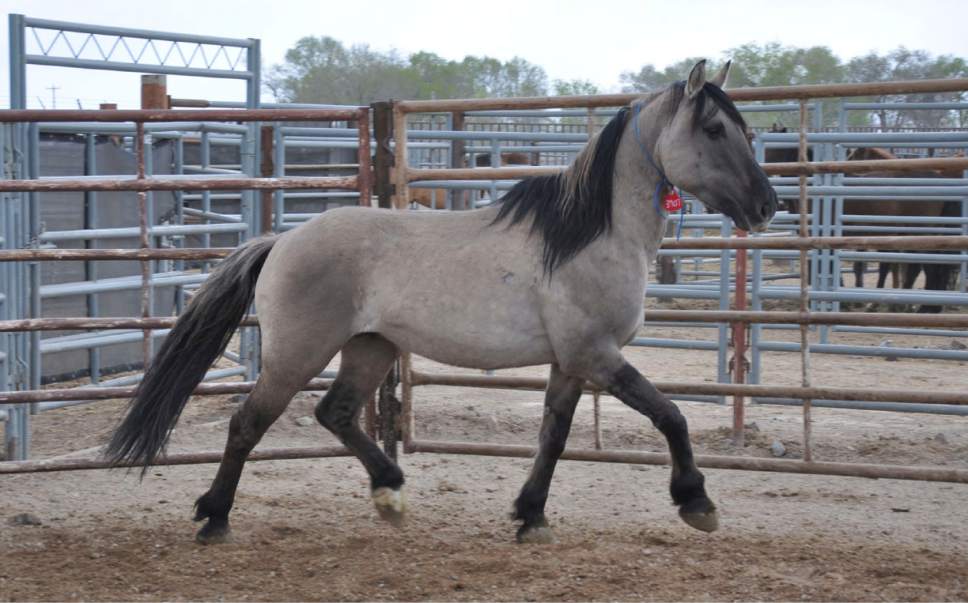 But in the end, freedom was fleeting, and the Grulla stallion was recaptured. Life as he knew it was over. After his capture, he was loaded onto a trailer and hauled to BLM corrals in Delta, Utah.

The striking mustang became an Internet sensation after the BLM posted a photo of him in a holding pen as part of an Internet adoption. The story of the handsome Grulla #3907, as the BLM had labeled him, spread widely on social media. Although more than 24,000 people signed a petition calling on the BLM to return him to the wild, the agency auctioned off to the highest bidder instead. That bidder was a breeder in the Pacific Northwest, and Grulla #3907 appeared destined to spend his remaining years in a breeding pen.

But Jacquelyn Hieber, the mustang advocate who began organizing in April to save the elder stallions that were ensnared in the Sulphur roundup, was not about to give up on her dream of freedom for Grulla #3907.

“I’ve watched over this horse ever since the auction ended. Something just told me to,” says Hieber, who was the auction’s high bidder for three other senior stallions – including the oldest captured. She later adopted two Sulphur mares and foals from the BLM to add to the rescued herd. 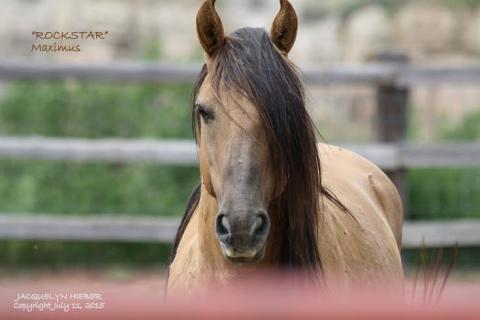 Hieber explains why these horses caught her attention: “These old boys fought for over twenty years to protect their mustang families. They were strong warriors, fighting for their freedom. But now, the warriors were in trouble. They had been captured by helicopter… they fought bravely. They tried to escape, but did not succeed. I cried when I saw photos of them after the roundup. These senior stallions were still prancing majestically, but now they were imprisoned in holding pens. Their families were gone, separated forever.  I couldn’t stand by and do nothing. I had to help them fight, to get them back to freedom.”

Hieber was successful in getting her seven adopted Sulphur horses back to freedom — the 11,000-acre Black Hills Wild Horse Sanctuary in South Dakota kindly agreed to accept them.

But Grulla #3907 remained in her thoughts. Each time she traveled to the BLM Delta Corrals, she visited the stallion in his holding pen. She asked BLM staff for all the details about him. When she returned home to Ohio, Grulla #3907 was in her dreams.

A New Home for This Wild Stallion

Months later, Hieber received a call from the BLM. The high bidder for Mr. Grulla had reneged, and the number two bidder had declined to purchase him as well. Hieber was high bidder number three.  Mr. Grulla #3907 was hers!

She was ecstatic – the beautiful mustang she had thought about for months, the wise elder who had entered her dreams – was going to be free! Soon he would join his herd at the Black Hills sanctuary! 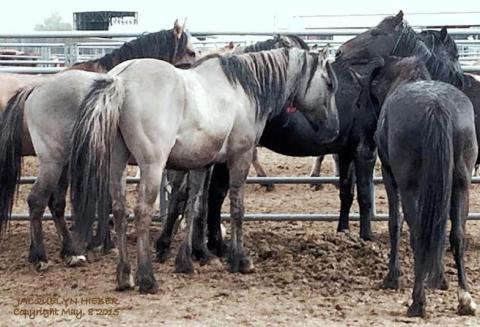 Grulla #3907 will be transported next month to Black Hills. Hieber has adopted another Sulphur gelding to travel with him, bringing the number of Sulphur mustangs she saved to 11 – a small herd, but still a family.

But, she’s not finished with her mustang advocacy yet.

“I work all day, and I don’t want my tax dollars used to round up and remove mustangs from their homes on the range,” Hieber, a senior manager for a medical device company, says. “People just don’t know this is going on. We have to spread the word. As taxpayers, we can’t allow this cruel nightmare to continue.”

1. Help Grulla #3907 and his friend get to the Black Hills Wild Horse Sanctuary

2. Take action and spread the word about the plight of America’s mustangs and burros.

3. Learn more about the wild horse and burro issue.

The American Wild Horse Preservation Campaign (AWHPC) is dedicated to protecting and preserving America’s free-roaming wild horses and burros on public lands in the West as part of our national heritage. AWHPC’s mission is endorsed by a national coalition of more than 60 organizations. To learn more about how you can get involved with this organizations amazing mission, check out their website, here.