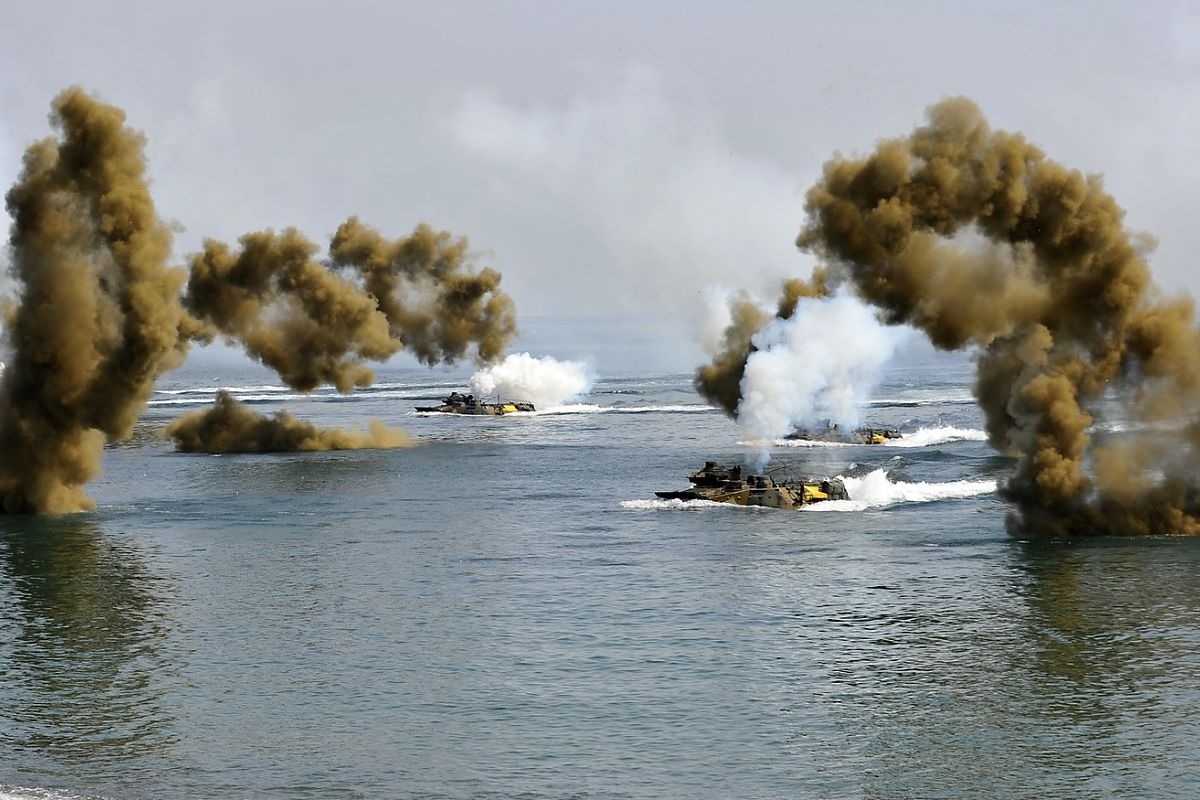 There are a number of industries that receive attention from climate activists and the wider public for their polluting activities. Agriculture, aviation, and, of course, energy regularly feature in discussions on the climate crisis.

The defense industry is, however, often overlooked. But as a major environmental villain, it’s highly deserving of scrutiny in 2021.

In a 2019 Town Hall, Joe Biden said  that the US military had told him and Barack Obama that climate change was the “greatest danger facing our security.” Similarly, UK military officials have been warning for years that global warming poses a grave threat to security.

But, despite apparently being aware of this danger, the militaries of both of these countries are super contributors to global warming. As The Conversation reported in 2019, analysis has revealed that the US military is “one of the largest polluters in history”. The study showed that the “US military is a bigger polluter than as many as 140 countries”. Meanwhile, research carried out for Declassified UK in 2020 found that “Britain’s military-industrial sector annually emits more greenhouse gases than 60 individual countries”. Declassified UK said the emissions produced by the UK’s Ministry of Defense (MoD), along with its supply chain, were up to 11 times more than the government department admits.

These militaries do acknowledge that they contribute to climate change. The MoD, however, said it did not “recognise the figures” quoted in Declassified UK‘s report. The US and UK militaries have also taken some steps to lower their environmental impact. But neither of them appear to make it particularly easy for others to scrutinize their pollution. The researchers behind the US-focused report detailed in The Conversation said it is “very difficult to get consistent data from the Pentagon and across US government departments” on military emissions. Likewise, the Declassified UK report stated that the MoD is “highly selective in the data and related information on its environmental impacts” that it publishes. In response, the MoD insisted that its “direct CO2 emissions are independently verified each year and reported in our Annual Report and Accounts”.

Crucially, neither military appears to be considering the most obvious way to reduce their vast pollution: stop making war. The US’ latest annual defense budget of a massive $740bn, which passed in the House and Senate with substantial majorities, illustrates that well. In November, the UK also confirmed an extra £21.5bn [~$29.1bn] spending on defense over the next four years. This is in addition to the annual defense budget of £41.5bn [~$56.2bn.]

As the US-focused report’s authors wrote in The Conversation, tackling the climate crisis “demands shuttering vast sections of the military machine. They said this is necessary because “few activities on Earth as environmentally catastrophic as waging war”. The authors argued that it “does no good tinkering around the edges of the war machine’s environmental impact”. Likewise, the Declassified UK report stated that only “a major change in UK military strategy… is likely to lead to low levels of environmental impacts, including low [greenhouse gas] emissions”.

Although the defense industry creates vast amounts of pollution, it’s most commonly associated with destruction. Conflict is a taker, not a giver. That largely holds true for people and the rest of the natural world. As UN Environment’s then-executive director Erik Solheim said in 2018, war presents “a risk for humanity and other forms of life on our planet. Too many lives, and species, are at stake”.

The Costs of War Project documents the costs of post-9/11 military action in Afghanistan and Iraq, along with connected violence in Pakistan and Syria. It asserts that the “wars in Iraq, Afghanistan, and Pakistan have had a serious impact on the natural environments of these countries”. It further states that along with “the degradation of the natural resources in these countries and a radical destruction of forest cover, the animal and bird populations have also been adversely affected”.

Conflict’s influence on the natural world is multi-faceted. Of course, species and biodiverse landscapes – like people – can be at risk of perishing in military assaults and violence. But war also has knock-on effects that can have a major impact.

The Rwandan civil war, for example, led to the displacement of nearly 750,000 people into camps near Virunga national park. As The Guardian previously reported, the Worldwatch Institute found that “around 1,000 tonnes of wood was removed from the park every day for two years in order to build shelters, feed cooking fires and created charcoal for sale” as a result. Meanwhile, conservationist Ian Redmond pointed out that “War is bad for wildlife in as many ways as for people. Conservation suffers because rangers often have to flee the fighting, and may be attacked because rebel armies covet their vehicles, radios and guns. Moreover, rebels often feed their troops on bushmeat and finance their ops with ivory, timber, charcoal and minerals from protected areas”.

The Ecologist has reported, conflict can also lead to the collapse of institutions tasked with environmental protection. It can further cause an exodus of people, such as conservationists, from militarized areas, leading to a “brain-drain” in those regions.

In short, when it comes to sectors implicated in the climate and biodiversity crises, the defense industry is right up there among the big villains. Yet it receives relatively little attention in discussions on tackling the world’s environmental problems. That needs to change. People need to pressure policymakers to address the environmental impact of their defense-related choices. Climate activists and the wider public should also be asking how hawkish decision-making and militarism are conducive with the emissions reductions and biodiversity protection needed to safeguard our planet – because they quite clearly are not.