5 Ways We Can Help Save Bees and Monarchs 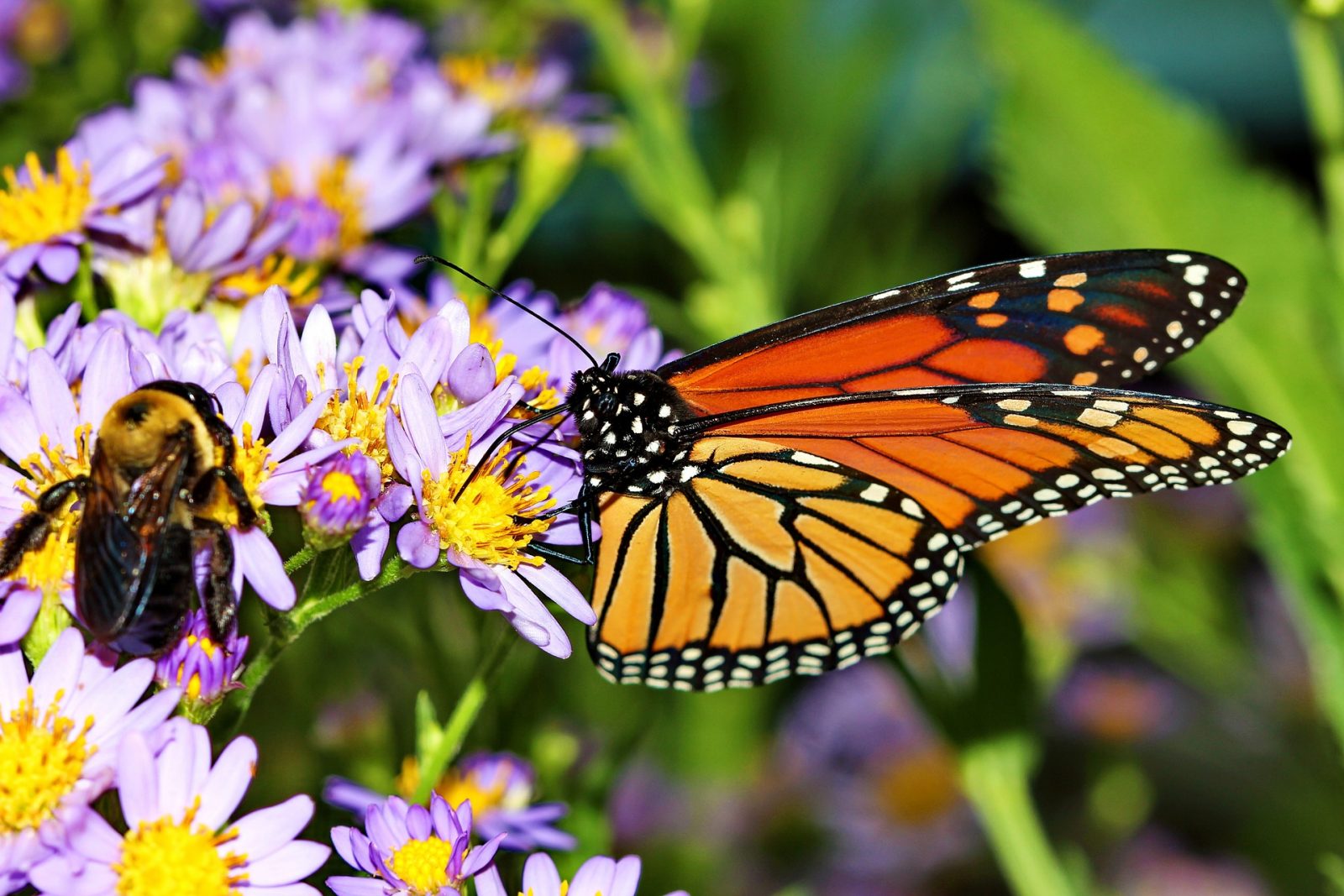 Each species, no matter how small, plays an important role in the survival of our planet’s ecosystems. And each time a species disappears due to extinction, or we see their populations rapidly decline, it impacts those ecosystems in a way that cannot be reversed.

In January 2017, the U.S Fish and Wildlife Service placed the rusty-patched bumblebee on the endangered list after seeing its population decline by a staggering 87 percent over the past two decades. And just a few months prior, they declared seven species of Hylaeus bees, which are native to Hawaii, endangered as well. But it’s not just bees that are in trouble. Populations of monarch butterflies have declined by an astonishing 96.5 percent over the past few decades.

Bees and monarchs play an important role in pollinating plants. Monarch butterflies help pollinate crops and wildflowers as they make their annual migration to Mexico from the U.S. and Canada. Bees are responsible for pollinating 70 of the top 100 food crops consumed by humans, and there are at least 10 food crops that are fully or significantly dependent on bees. When the bees are gone, those foods will go away as well.

Both species are in danger and need our help, but where do we start?

Habit loss is a main contributor to the decline in bee and monarch populations. Factors that contribute to this loss include deforestation, urban development, agricultural practices, and climate change. As habitat is destroyed, bees and monarchs have to travel farther to find new habitat to live, feed, and reproduce. Not all can survive a longer journey, harming populations that are already struggling to thrive.

You can help by being an advocate for the protection of grasslands and forests, supporting organizations working to save pollinators, and prevent the degradation of these habitats. Since grazing cattle contribute to the destruction of forests and grasslands, our food choices also have an impact on the preservation of natural habitats.

Planting a pollinator-friendly garden with native flowering plants, vegetables, and herbs will help attract bees and monarchs. Make sure you also include native milkweed, which is vital to the monarch’s survival. Monarchs only lay their eggs on milkweed, which then serves as a food source for the caterpillars. An additional benefit of using plants that are native to your region is they’re accustomed to your particular climate, meaning they require less maintenance and often less water to grow.

Apartment dwellers with outdoor space can place a few potted flowers outside, or you can encourage your local community garden to include plant flowers that attract bees and butterflies. You can also support highway habitat corridor programs, which aim to plant milkweed and nectar-producing plants throughout the Midwest and Texas, which is along the monarch’s migratory path.

Pesticides harm bees and monarchs when they come into contact with sprayed crops. Use your power as a consumer and buy organic produce and other products whenever possible. During the warmer months, visit farmers markets that sell produce from local, organic farmers. If you have space for a garden, you can even grow your own seasonal fruits and vegetables using eco-friendly practices for fertilization and pest control.

4. Understand the Impact of Climate Change

Climate change and the resulting extreme weather conditions are also of concern. In 2016, a winter storm in the Monarch Butterfly Biosphere Reserve resulted in the loss of 53.94 hectares of forest due to wind-fallen trees, and many monarchs died in the sub-freezing temperatures. Warmer temperatures can result in early blooming flowers, which becomes problematic if they bloom before the bees have returned to help pollinate.

One of the easiest ways you can help fight climate change starts on your plate. Animal agriculture is responsible for more greenhouse gas emissions than the entire transportation sector, so by reducing your consumption of meat and dairy, you can have a major impact. Not only can you halve your carbon footprint by leaving meat off the menu, but you can help conserve water, and reduce deforestation for agricultural purposes as well. Join One Green Planet’s #EatForThePlanet campaign.

5. Be an Advocate for Bees and Monarchs

Support national parks and conservation agencies working to protect natural habitats, including our declining grasslands. The U.S. Fish and Wildlife Service and the U.S. Department of Agriculture have both pledged to contribute millions of dollars toward efforts to help save monarchs. The North American Pollinator Protection Campaign is also working to educate the public about the role pollinators play in our ecosystems and promote the conservation and protection of habitats.

If you need further inspiration, watch the story of this nature photographer who has dedicated his life to saving the bees. Change is possible, if we all do our part.