5 Reasons Why Monkey ‘Actors’ are Nothing to Laugh About

Crystal the capuchin monkey has been described as “the Angelina Jolie of animal stars” and has performed in 25 films over the last two decades, including Night at the Museum and The Hangover.

According to recent reports, she is one of the “highest paid animals” in Hollywood. A 2012 poll showed Crystal as earning $12,000 per episode for her role in the NBC show, “Animal Practice.” This placed her as the fifth highest earner in TV comedy (regardless of species – Ashton Kutcher topped the list) for that year.

She has recently been awarded a “Pawscar” during a tongue-in-cheek take on the Oscars promoted by the American Humane Association (AHA); the organization whose famous (though controversial) statement, “No animals were harmed in the making of this film,” has attempted to assure audiences since the 1940s that their favourite animal actors have been well cared for. 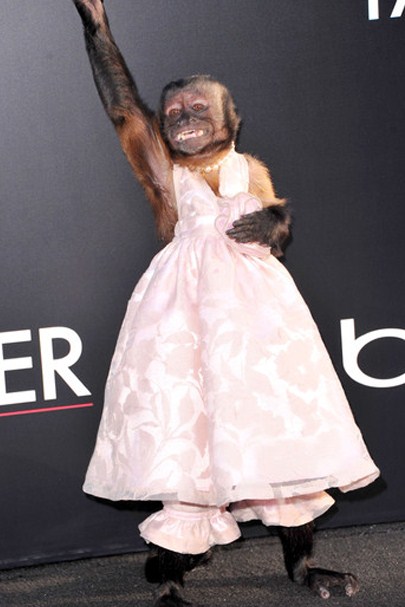 But is dressing a wild animal in a ball gown and parading her in front of large audiences, or having her don a tiny three piece suit to perform comedy skits in a Hollywood film, really harmless fun, as the AHA would have us believe? Or is it animal cruelty, plain and simple? Here are five important reasons why we think you should avoid films with performing monkeys (or any other wild animal!) in them.

1. Primates are social animals who need to live in large groups

Capuchins, like Crystal, would naturally live in the rainforests of Central and South America in groups made up of up to twenty individuals. A capuchin forms part of a complex social structure and will forge familial and friendship bonds with his or her troop mates. Monkeys used as actors are usually deliberately removed from their mothers at a very young age in order to habituate them to human contact. They are denied normal social development and this can cause lifelong psychological harm to the animals involved. 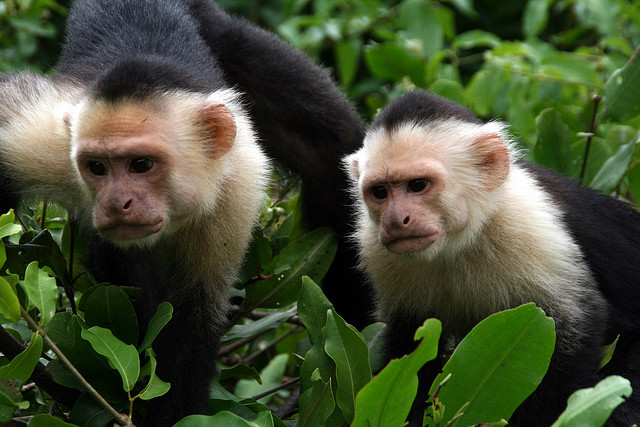 2. Monkeys are wild animals and they belong in the wild!

The capuchins’ natural rainforest home presents a huge range of challenges and opportunities for its inhabitants. With lush greenery, exciting smells, sounds and co-habitants, capuchins thrive in their natural jungle home. Travelling over large areas and making the most of the bountiful fruits, leaves, nuts, insects and small animals which make up their natural diet, capuchins lives life to the full in the forest. In contrast, wild animal actors held captive by the entertainment industry are denied some of the most fundamental opportunities experienced by their free-living counterparts. 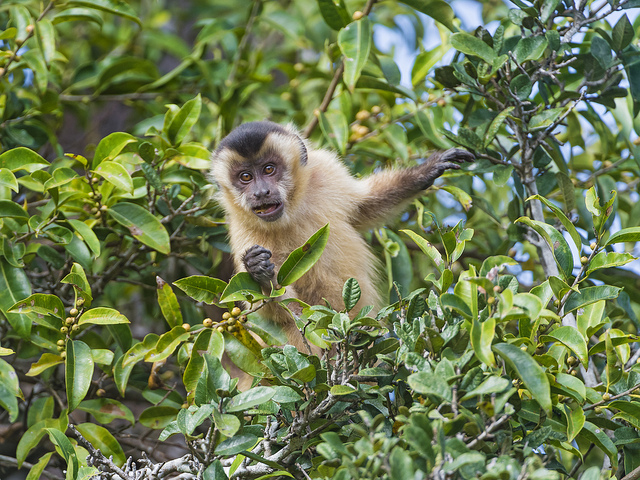 Monkeys and other non-human primates, such as chimps, are often thought to “smile” like humans. Many scenes featuring Crystal the capuchin show the little monkey raising her eyebrows and giving a toothy “grin” to the audience. But for a capuchin, this grin does not denote happiness. Instead, it is used to signal uncertainty, nerves or even fear. Subordinate members of a troop will grimace in this way to appease another, more dominant, monkey. 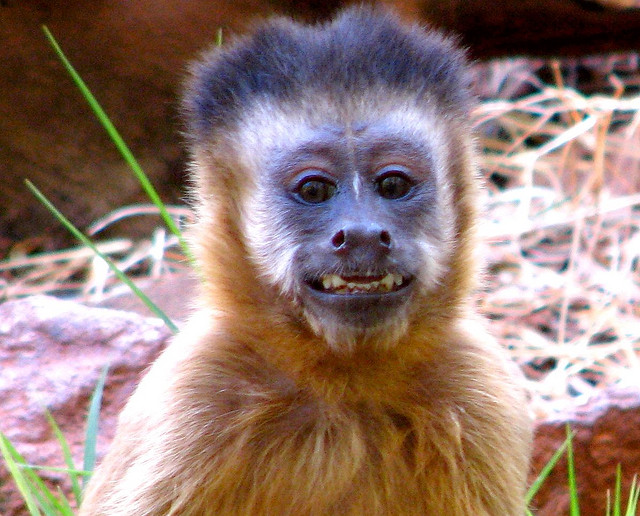 4. When the camera stops rolling, the “star treatment” ends

Marco is a chimpanzee. For the first part of his life, he lived with his father and six other chimpanzees in an old dilapidated truck in Valencia, Spain, and was used in a number of high profile television and print adverts. Within the truck, each chimpanzee was housed individually in very small 6×6 foot cages in total darkness. The chimpanzees had no choice but to sit in their own feces and leftover food.  Marco spent the majority of his time inside the truck. In fact, the only time he was any light of day was when he had to “star” in the commercials. Sadly, this is the reality for most animals used in the entertainment industry; the bulk of their time is spent wasting away in a cage until they are pulled out to entertain.

Thankfully, Marco was rescued at age seventeen and now lives at the Mona Sanctuary in Spain, where he has adjusted and his health and welfare needs are properly met. Others are not so lucky and endure a lifetime of suffering in the entertainment industry. 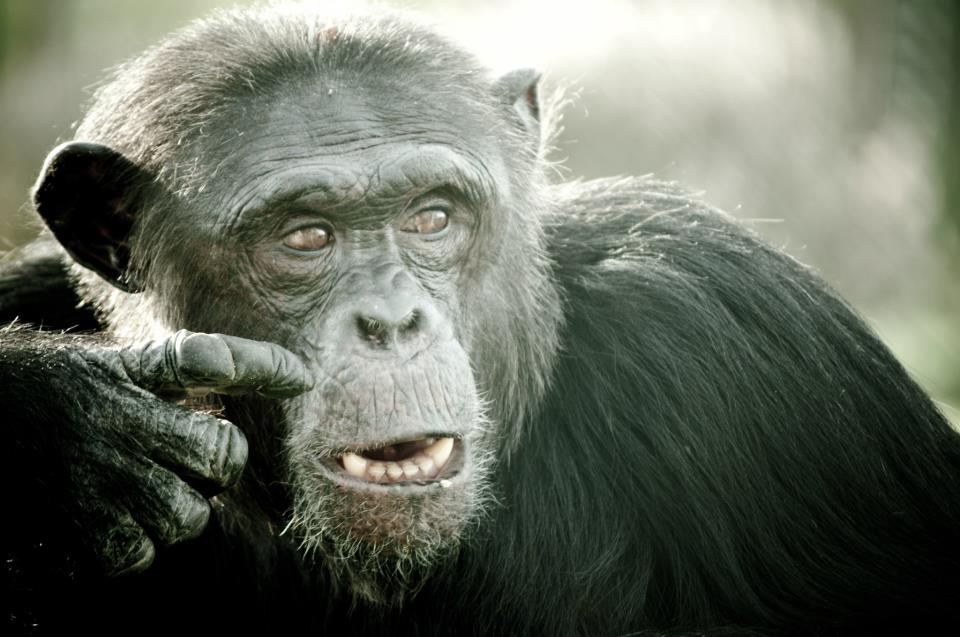 5. Use of monkeys in the media can negatively impact conservation efforts and fuels the exotic pet trade

Recently published research has confirmed that the portrayal of non-human primates in the media can lead people to believe that these species are not threatened in the wild and that they might make suitable pets. This means that the use of one monkey in a film or television show might have a direct impact on other monkeys; both those threatened in the wild and those who are deliberately bred into a life in captivity as part of the exotic pet trade. 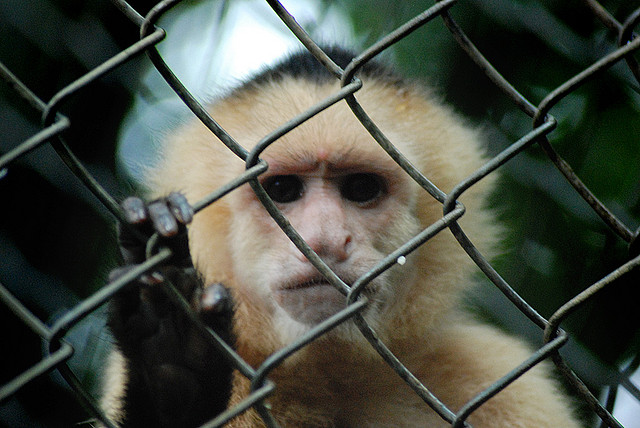 Wild animals are not actors and monkeys do not belong in ball gowns or on red carpets. Please don’t support movies which feature wild animal actors and, instead, check out the great work being carried out to bring an end to the use of wild animal actors in TV and film, such as the Animal Pledge and AdNimals free