What PETA Has to Say About Animals Euthanized at their Shelter 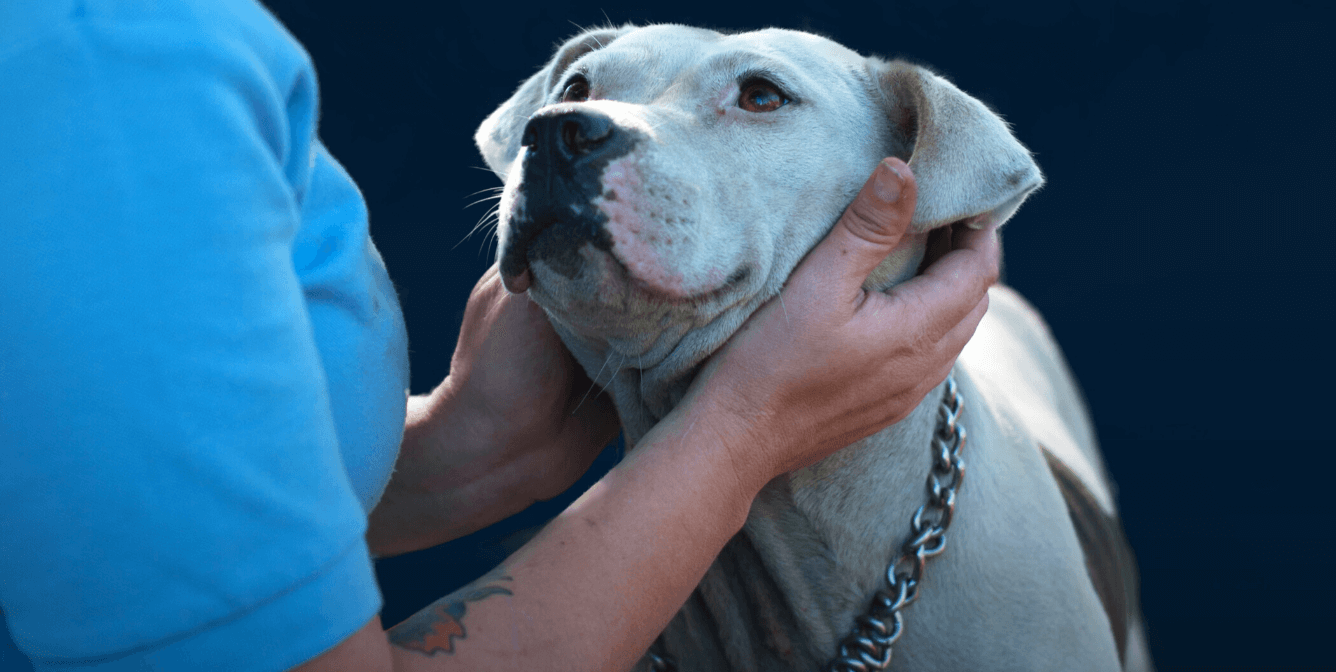 “Sorry, we’re full” is a line you’ll never catch the staff at PETA’s shelter uttering, and that means providing the final act of kindness that should be available to all dogs, cats, and other animals: euthanasia. Since joining the PETA workforce nearly four years ago, I’ve learned that responsible, humane sheltering can’t exist without euthanasia. It’s a facet of PETA’s work that’s often referred to as “controversial,” but the fact that we offer free euthanasia services to prevent avoidable suffering is the aspect of the organization that I’m most proud of. And now, thanks in part to the release of the documentary Breaking the Chain, the concept that every animal deserves to be free of emotional and physical pain is being embraced by the public, too. 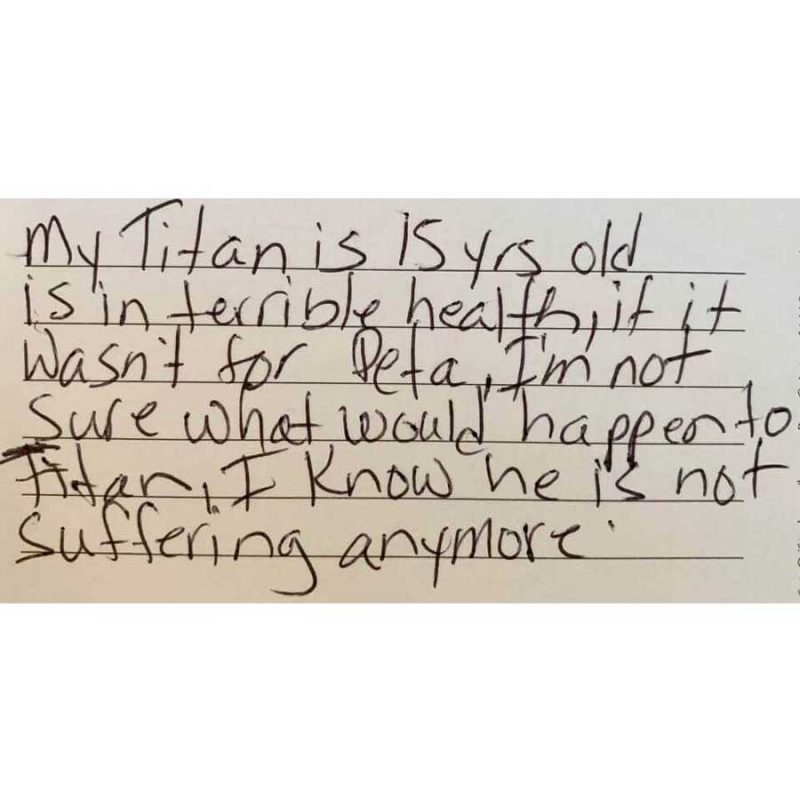 For suffering animals like Titan, euthanasia is a necessary kindness. “My Titan is 15 [years] old, is in terrible health,” wrote his guardian. “If it wasn’t for PETA, I’m not sure what would happen to Titan. I know he is not suffering anymore.” image source: © PETA

If you’re reading this, you must have some interest in the companion animal overpopulation crisis. And while the answers to the frequently asked questions below serve as something akin to CliffsNotes, I highly encourage you to watch Breaking the Chain. Reading about euthanasia is one thing, but seeing the mistreated, often-forgotten animals who rely on PETA and the services that we provide on-screen is something else entirely.

The word “euthanasia” comes from two Greek words—“eu” meaning “good” and “thanatos” meaning “death.” Euthanasia is defined as a merciful release from life in order to end suffering. And unlike selective-admission shelters (such as those that misleadingly tout “no-kill” policies), PETA operates a safe place from which no animal is turned away, including (or perhaps especially) when a peaceful and painless death is an animal’s most compassionate option.

Companion animals depend on us for their care and comfort. When the alternatives to euthanasia include leaving them to struggle to survive on the streets, languish in crates or cages for months or even years at so-called “no-kill” shelters, become the victims of animal abuse or neglect, or endure an unnecessarily prolonged death (such as when a guardian refuses to make that tough final decision), then providing them instead with a peaceful, dignified end is the least we can do.

Why Do We Euthanize?

When friends have asked me why PETA euthanizes animals, I remind them of Sequoia, my childhood canine companion and—for more than a decade—my best friend. When I was 20 years old, his veterinarian explained that he was in pain and that choosing not to euthanize him would be a decision that my family and I would be making for ourselves, not for him. I was fortunate (and privileged) enough to be able to say goodbye to Sequoia in my parents’ home—his home—while a veterinarian ensured that his passing was peaceful. Euthanasia is tough emotionally, but I can only imagine how much worse it would have been if my family hadn’t been able to afford the painless, veterinarian-recommended exit that we gave Sequoia.

Duck, a beloved golden retriever, had developed a debilitating seizure disorder for which there was no treatment. “PETA helps do so much even when you are at the worst point in life,” his guardian wrote in a note. “[T]hey help animal[s] regardless of a family’s ability to pay.” 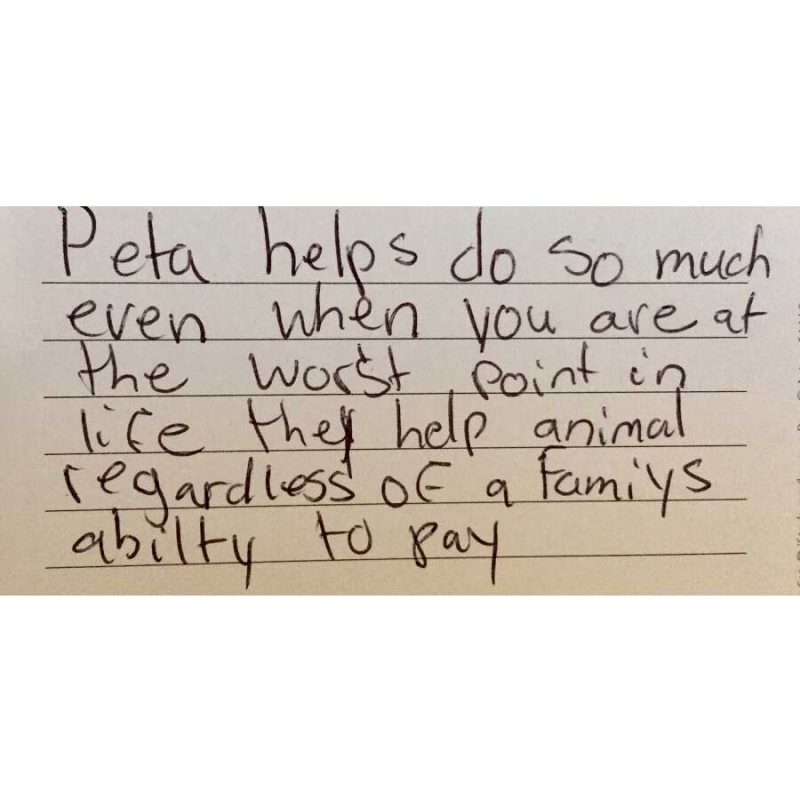 Duck, a beloved golden retriever, had developed a debilitating seizure disorder for which there was no treatment. “PETA helps do so much even when you are at the worst point in life,” his guardian wrote in a note. “[T]hey help animal[s] regardless of a family’s ability to pay.” image source: © PETA

This is why PETA euthanizes. Because if our rescue team didn’t euthanize, what would happen to animals like Duck (above)? Many of my friends have their own Sequoia stories—and my anecdote certainly prompts most listeners to nod their heads in agreement that euthanasia is a service that should be available to all. 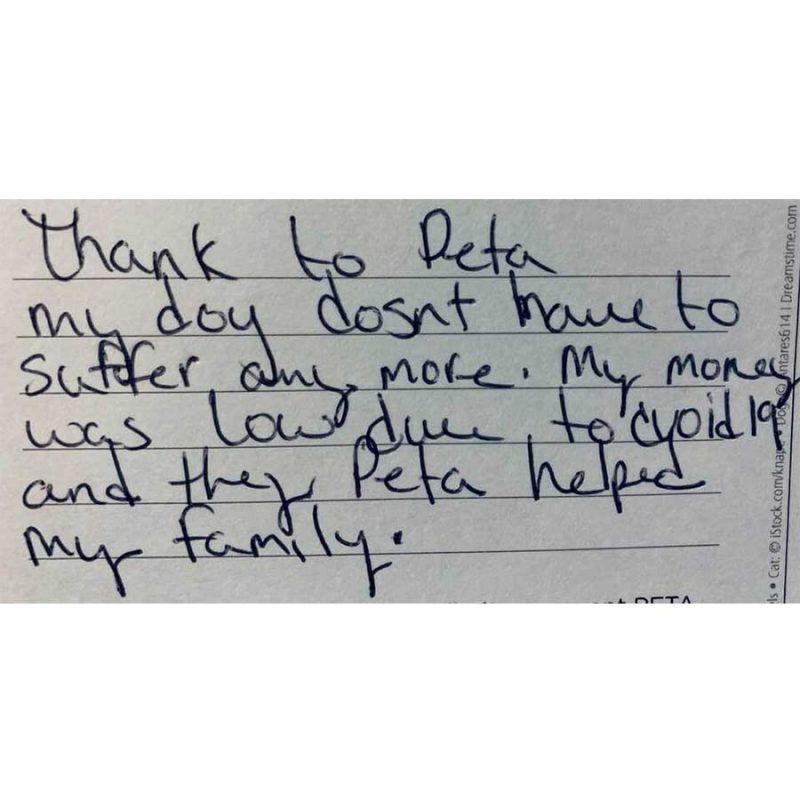 For dogs like Powder, euthanasia is a painless way out of a pain-filled life. “Thanks to PETA, my dog doesn’t have to suffer anymore. My money was low due to covid-19 and … PETA helped my family,” Powder’s guardian wrote. image source: © PETA

Many of the other animals euthanized at PETA’s shelter—feral, aggressive, and otherwise unadoptable—would have been turned away by facilities with “no-kill” policies, which often reject unadoptable animals in order to keep their euthanasia statistics appealing. Take Popper, for instance—the beloved pit bull was euthanized after repeated incidents of sporadic aggression toward humans and other animals. He had shown signs of aggression since puppyhood. After multiple attempts to change his behavior had failed, his guardians—knowing they could count on PETA—called us for help. 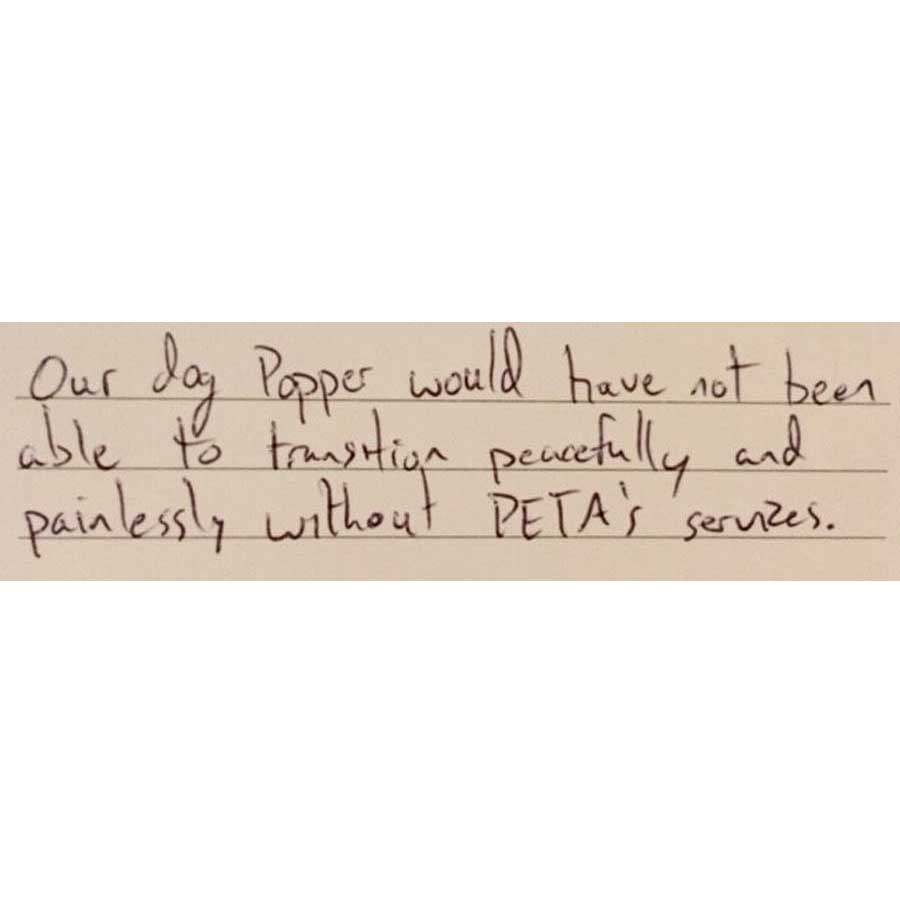 “Our dog Popper would have not been able to transition peacefully and painlessly without PETA’s services,” Popper’s guardian wrote in a note. image source: © PETA

All guardians (regardless of their means) should be able to ensure their animal companion’s comfort to the very end.

Does PETA Run a Shelter?

Yes. From the beginning, PETA, our shelter, and our fieldwork program have dedicated our services to the animals of southeastern Virginia and northeastern North Carolina in the direst of circumstances (animals like Kya, below, whom others are unwilling to help), not the healthy, happy ones—because healthy, happy animals don’t usually need to be rescued.

Unlike selective-admission shelters (often misleadingly referred to as “no-kill” shelters), PETA doesn’t turn away the Kyas of the world. When impoverished families can’t afford to pay a veterinarian to end the suffering of their terminally ill, elderly, or badly injured animals, PETA will always help—for free. When aggressive, unsocialized dogs have been left on a chain to starve, with a puppy-size collar embedded in the flesh of their adult-size necks and their bodies tormented with mange, we will not allow them to die slowly and miserably, alone and forgotten in someone’s backyard. We will take them in and show them that not all humans are callous and that they deserve kindness, respect, and affection.

As Virginia officials speaking about our shelter acknowledged to USA Today, “PETA will basically take anything that comes through the door, and other shelters won’t do that.”

Today, the primary focus of our shelter is still on serving sick, injured, feral, and unadoptable animals. Several cozy, homey rooms are dedicated to housing the adoptable animals PETA takes in (like Oreo, below) while they await adoption, a foster home, or transfer to a partner shelter with a robust adoption program. 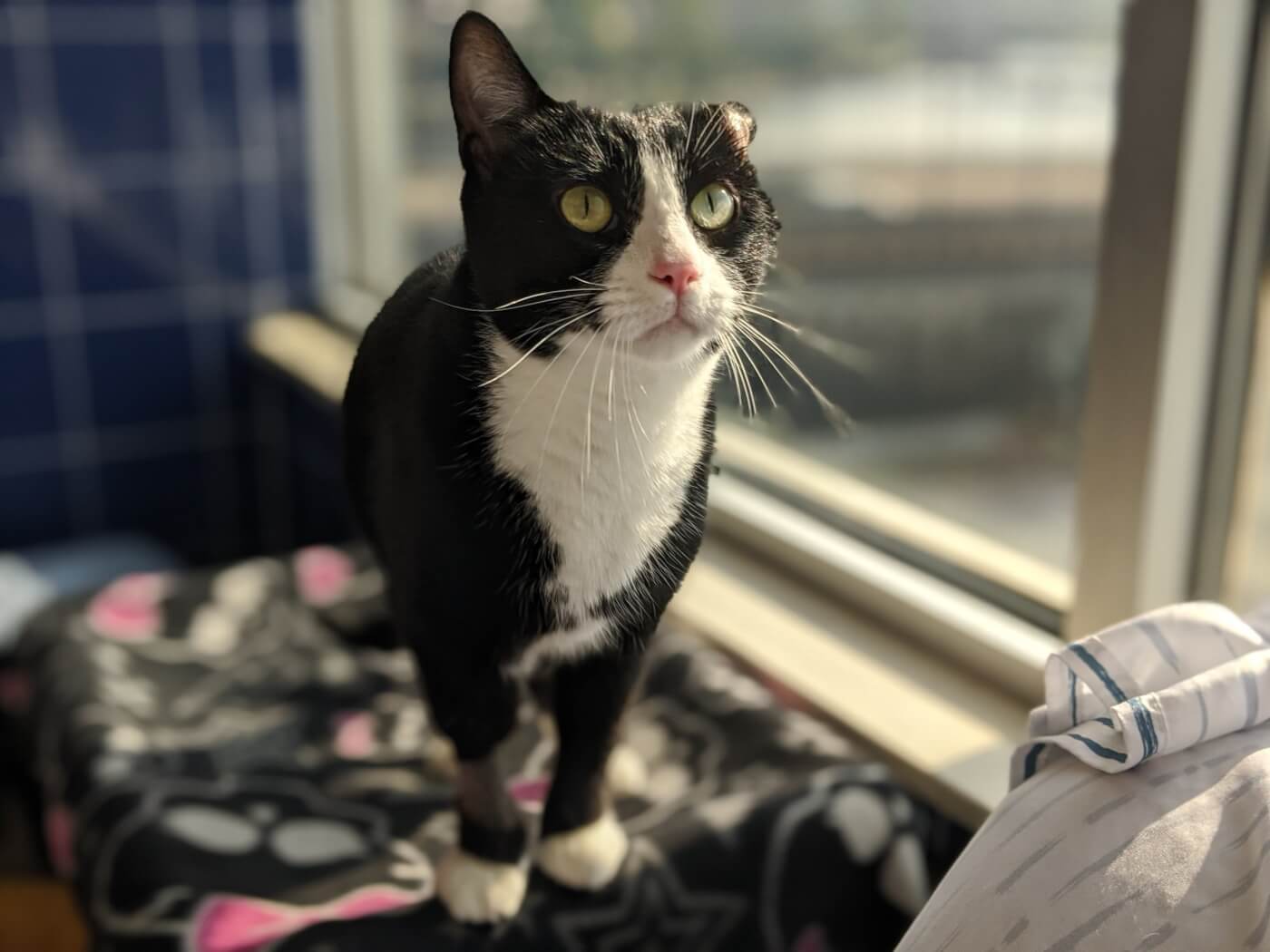 PETA worked to get Oreo seized by law-enforcement authorities after seeing a Snapchat video of a teenage animal abuser beating him. The sweet, shy cat—who experienced severe psychological trauma and sustained permanent damage to his left ear—didn’t have to wait long to get adopted: One of PETA’s fieldworkers fostered him and became so attached that he just couldn’t bear to part with him. Visit PETA.org to meet the other animals who are still looking for a loving, permanent home.

Front groups for animal-exploiting industries try to deceive the public about certain aspects of PETA’s work helping animals, including euthanasia. But we and our members and supporters know the truth—that we are against all needless killing, whether it’s for experimentation, food, clothing, or entertainment—and we have nothing to hide. Of the more than 26,000 animals PETA’s fieldworkers helped in 2020, 1,763 (roughly 7%) were euthanized, more than 830 were adoptable animals who we transferred to high-traffic open-admission shelters for a chance at adoption, 44 (including Yeehaw Wayne) were adopted into permanent homes, and 12,565 were spayed or neutered—and that’s not including the thousands of indigent families that we helped keep animals they were about to give up by providing free medical services, including repairing prolapsed organs, performing life-saving surgeries on dogs suffering from dangerous uterine infections, removing tumors and ruptured growths, performing drainage surgery for hematomas and infected wounds, and treating ear, skin, and upper respiratory infections.

So, while some claim that solving the overpopulation crisis is as simple as housing homeless animals in crates stacked to the ceiling, we know that warehousing animals is cruel, doesn’t address the root of the problem (uncontrolled breeding), and isn’t the answer—prevention is.

Recap: Euthanasia isn’t the problem—puppy mills, breeders, and irresponsible owners who bring more dogs and cats into the world are. And as Breaking the Chain teaches viewers, the best way to help these animals is by passing spay/neuter legislation and implementing a ban on breeding animals, selling them in pet stores, and keeping dogs tethered or penned outside. If you care about dogs, cats, and other companion animals, please join us in working toward a day when every one of them has a loving home. Watch Breaking the Chain on Apple TV, iTunes, Prime Video, Google Play, Vudu, or Vimeo On Demand to learn more.

Katherine Sullivan is a senior online news content producer for People for the Ethical Treatment of Animals (PETA).