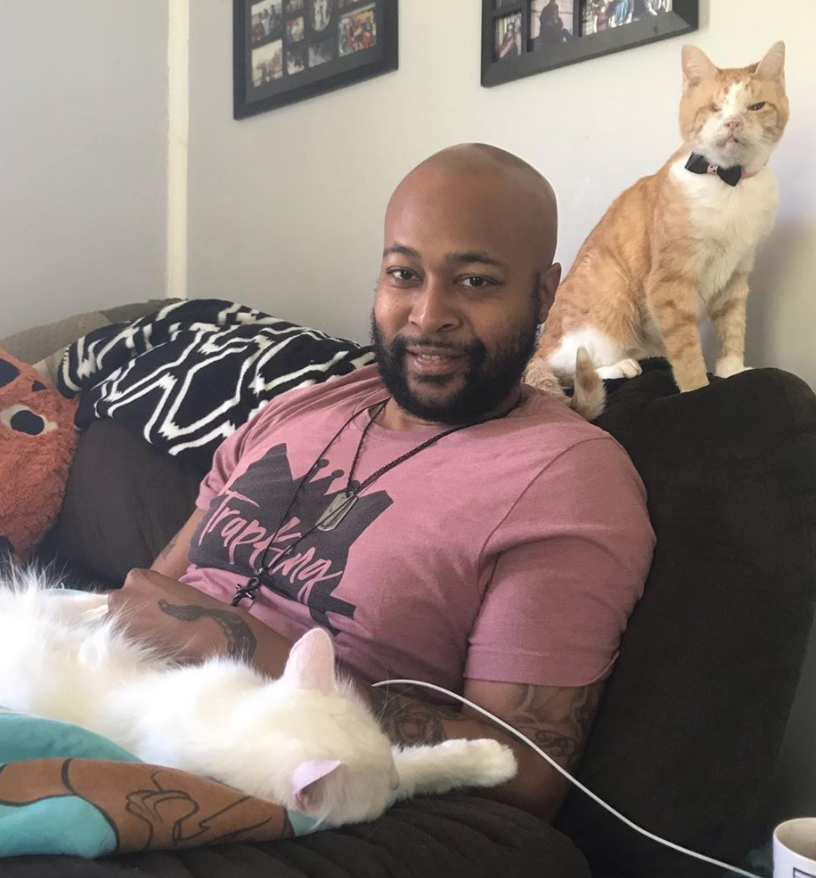 Sterling “TrapKing” Davis changes the perception of the words “trap king.” It’s often associated with someone who sells drugs or the music genre, but Davis is the “trap” king because of his amazing humane work saving cats. He specializes in trap-neuter-return (hence his name) which helps control the homeless cat population and manage cat colonies. It also helps prevent feline diseases and more.

Davis was recently featured on The Dodo for his amazing work:

With the ongoing momentum of the Black Lives Matter movement that was long overdue, Davis shared his experience as a Black man in America working in this field: “When I started doing TNR, I quickly saw that I was rare. So much so that out of like 6-8 hundred people at a cat conference, I was just about the only black man there. That’s when I came up with TrapKing. I was like, “I need to do something to get the black community more engaged in TNR/community cat care” I felt like because we use the term TrapKing or TrapQueen in so many ways and mainly for something that is considered cool, I could use “Trap” King to help spread the word about “Trap” neuter return. I picked up on TNR fast and was all over the place doing it and then I started going in predominantly white neighborhoods where I would be called names like “monkey” have guns pulled out on me, or just flat out be asked to leave because people couldn’t believe that this bald, tattooed black man was out here late at night helping cats.”

Davis’ work is so important because he is not only saving animals, he is also getting the Black community involved in animal rescue and showing white Americans that animal rescue and TNR work is not limited to white people. Davis is really changing the game.

His Patreon explains: “Historically, cat rescue is something that men and the black community aren’t into. With our cat ladies and cats needing more help and awareness, TrapKings mission is to get more men as well as the black community engaged in animal rescue while breaking stereotypes and bringing people together.  Reminding the world that ‘you don’t lose cool points for compassion.'”

During this time of compassionate and empathetic people trying to squash anti-Black racism, Davis is exactly the kind of person to support and promote. His work is about compassion, helping animals, and the Black community.

You can become a patron of his work via the TrapKing Humane Cat Solutions Patreon. Membership levels start as low as $1 per month and go up to $5 per month, $15 per month, and up.

TNR work is not easy. His Instagram page will show you all the hard work he goes through and how he doesn’t give up on cats, ever. Follow him, support his work, and share his story.