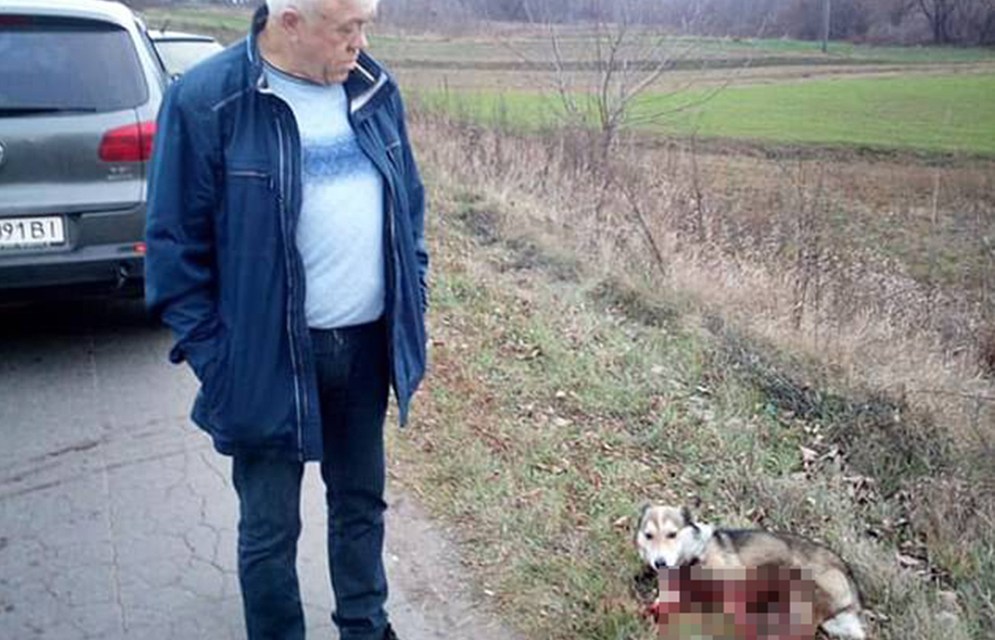 It’s hard to fathom just how cruel people can be, but the good news is that there are people in the world who stand up for what’s right and stop cruelty in its tracks when they see it. Recently, a hunter in Spain shot his dog, kicked her, and then dragged her down the road just because she had puppies. Thankfully, a witness recorded the incident, confronted the abuser, and got help for the dog. Unfortunately, another similar tragedy occurred in Ukraine.

A man driving down the road saw a Volkswagen pulling a dog by a chain. The dog left a mile of blood behind him as his skin was being peeled to the bone by the tarmac. The witness, Sergey said: “When I saw this awful episode I could not just forget it and do nothing. I blocked the motorway with my car and forced the Volkswagen driver to stop. I untied the dog. The skin on its paws was peeled off. The wounds were bleeding horribly. The Volkswagen driver said that he was punishing the dog for biting his mother. He said he was going to drag it to the woods and left [sic] it there to die.”

According to Daily Mail, “the witnesses took Barsik to a vet where he was diagnosed with multiple deep wounds, bruises and shock.” He was sadly so traumatized that he was left shaking for two whole days after the incident. Fortunately, there are already people who want to give Barsik, the dog, a forever home. After being heartbroken by photos of his wounds on social media, a woman named Natalia Pobozhna has already visited him and offered to adopt him.

Volodymyr Baidych, the cruel man who was dragging the dog, is a local top official in Ukraine. Fortunately, his status and position have not stopped him from facing the consequences. Inna Glega, a spokeswoman for Khmelnytsky Police Department said: “He is under investigation for animal cruelty. He faces up to three years in prison if found guilty.”

We hope the investigation finds him guilty. After all, there are photos and videos with clear evidence of his guilt. No animal deserves to suffer this way. Sign this petition by Lady Freethinker urging the Khmelnytskyi Regional Prosecutor’s Office to pursue this case to the fullest extent of the law and call for a lifelong ban on having any animals!