Cetacean researchers have long recognized that these animals are highly intelligent and sociable beings, and that their needs can never be adequately met while they are held in captivity. Dr. Thomas White – one of a group of scientists who argued before the American Association for the Advancement of Science (AAAS) in 2012 that dolphins should be acknowledged as “non-human persons” – said, “The similarities between cetaceans and humans are such that they, as we, have an individual sense of self. … The science has shown that individuality, consciousness, self awareness is no longer a unique human property. That poses all kinds of challenges.”

One of the most pertinent challenges is: should dolphins, whales, and other cetaceans really be confined to tiny tanks for the sake of our amusement? Can dolphin and whale shows really be categorized as  “cute”/”magical”/”breathtaking’/any other buzzword that captive dolphin and whale facilities generally use on their brochures? 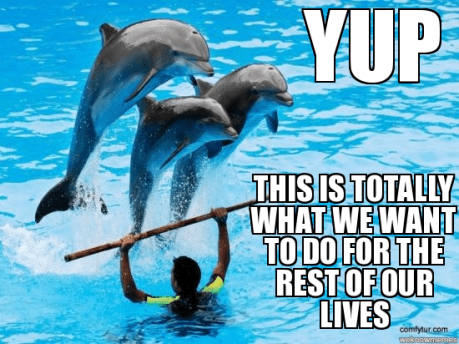 While for-profit captive cetacean facilities often seek to present tourists with a rose-tinted picture of how much their animals LOVE to perform, the reality is very different.

As U.K.-based conservation group Marine Connection puts it, “In the wild a healthy dolphin or whale very rarely beaches itself, jumps to hit a ball, allows someone to ride on its back, “sings” on command or allows itself to be “kissed” or fed.”

Witnessing this kind of staged, artificial behavior in a dolphin or whale is neither natural nor desirable, no matter how vehemently SeaWorld and other amusement parks might state otherwise. 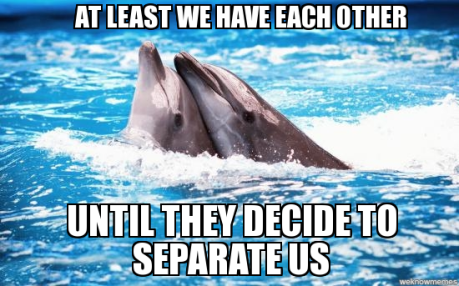 Perhaps the most damaging myth about cetacean captivity is that aquaria and amusement parks respect the natural bonds between dolphin and whale families.

On the “Truth” section of SeaWorld’s website (which was set up largely to counteract the negative publicity it was receiving from “Blackfish”), the organization states, “We do not separate killer whale moms and calves. SeaWorld’s successful development of its population of killer whales allows us to manage a healthy population of animals, while keeping young calves with their mothers and respecting the whales’ social structure.”

Well, SeaWorld, that would all be great if it were true…but unfortunately, it’s not. The Ocean Preservation Society has documented multiple instances of SeaWorld whales – as well as whales from other captive facilities – being separated from their mothers at a very early age. Former SeaWorld trainers have also spoken out about various mother-and-child separations they witnessed during their time at the park.

The love between a mother and a child is a universal phenomenon, regardless of which animal species the mother and child happen to fall into. 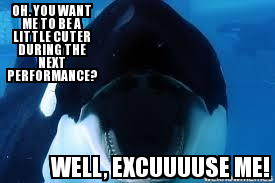 The brain of an orca is four times larger than the human brain, and second only to the sperm whale in terms of weight and volume. In the wild, these animals stay with their family pods for life, travel up to a hundred miles per day, and engage in a series of complex hunting mating, and nursing rituals that provide them with a sense of stability and co-operation.

So while SeaWorld might argue that their orcas’ participation in extravagant whale shows is better than no stimulation at all, surely the best way to provide for these animals’ needs would be to retire them to a sea pen, where they will be granted some degree of control over their own lives. 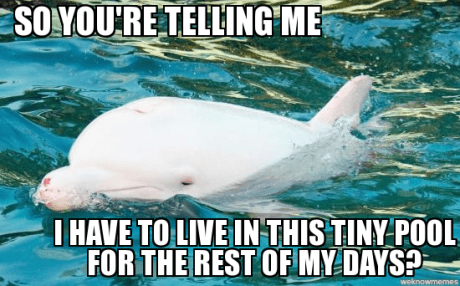 Sadly, certain dolphins and whales have suffered the stress of captivity simply because of their ‘exotic’ appearance. Angel, the all-white albino dolphin who was recently captured during the 2013-2014 cruel drive hunts in Taiji, Japan, is a case in point.

Before her capture earlier this year, she and her pod lived a life of freedom. But after spending a night in Taiji’s infamous Cove, where approximately 2,000 dolphins meet their deaths every year, she was forcibly torn away from her mother and taken to the Taiji Whale Museum, to be paraded around as some kind of rare and beautiful conquest for the Taiji hunters.

A similar fate befell a four-finned dolphin in 2006, when he, too, was captured in the Cove and brought to the Taiji Whale Museum, so that visitors could gawp at his unusual appearance. 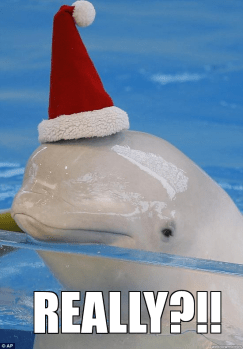 In an interview with environmental advocacy blog Earth in Transition, animal neuroscientist Dr. Lori Marino explained that beluga whales are popular targets for the captivity industry because “their faces are so full of expression that people become mesmerized by them. They’re able to captivate people in a  way that’s unique. But this is very unfortunate because it was all designed to enable them to communicate with each other in the wild, not with humans when they’re in captivity.”

Disturbingly, she added that “the captivity industry is always trying to breed more belugas for their collections, but it doesn’t have a clue how to keep the babies alive. When the most recent baby was born at the Georgia Aquarium, the staff there all just jumped in the tank, about a dozen of them, and I’m convinced that that was a huge mistake. They wanted to help, but it’s all so artificial. The mother was probably freaking out. And the baby died a few days later.” 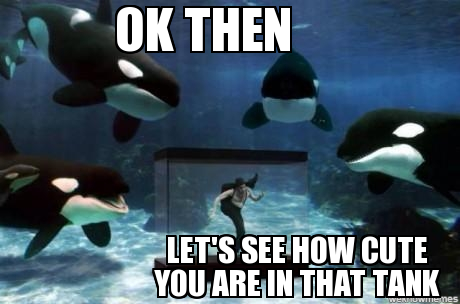 The idea that cetaceans may indeed be non-human persons, with a strong sense of their own individuality and place in the world, challenges us for many reasons. Every time we see or hear of a dolphin or whale living in a cramped tank, with no freedom of choice over their own lives, it forces us to ask ourselves, “What if that were me?”