The Scary Story of How Milk Ends Up in Your Glass 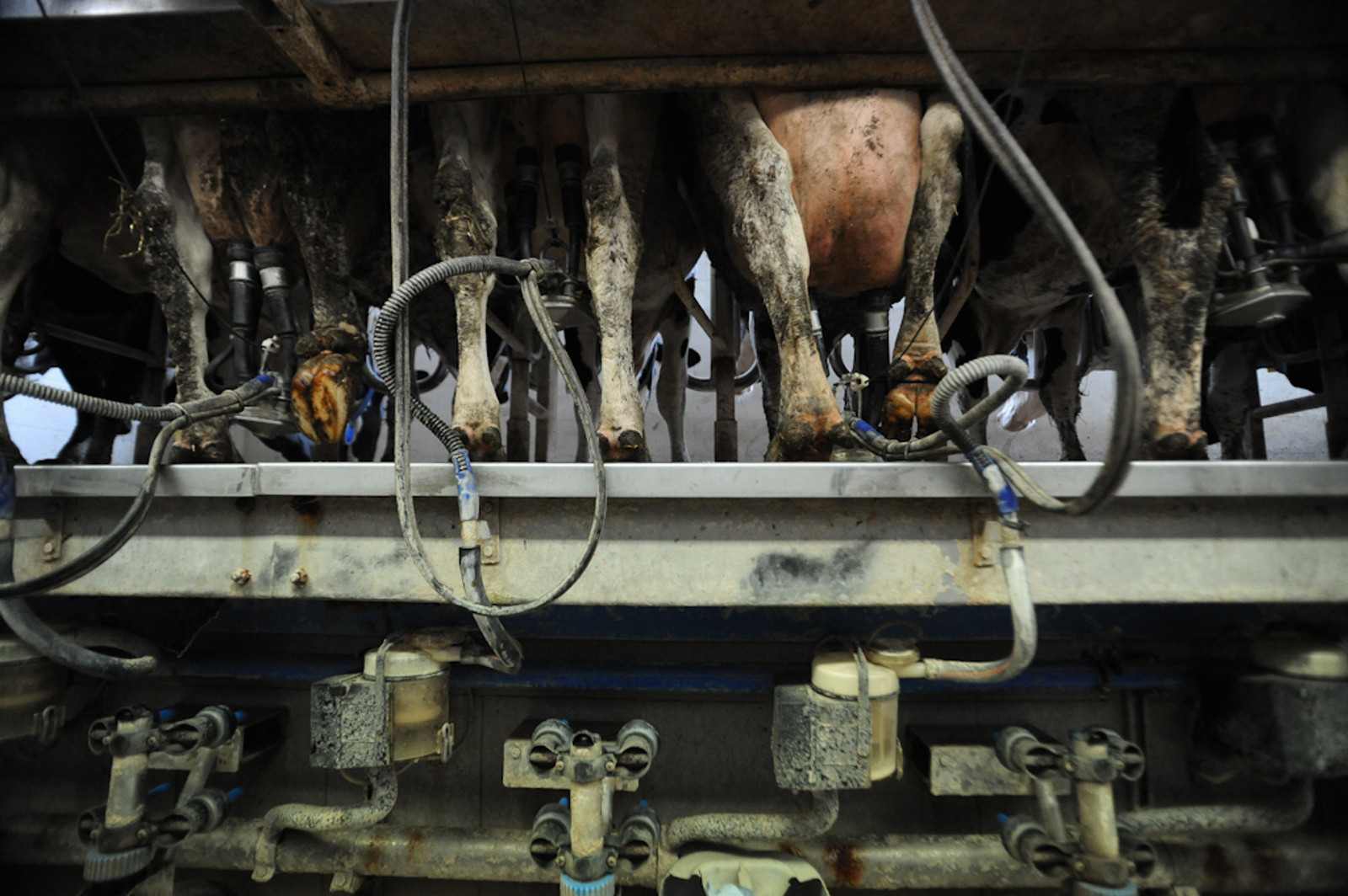 The traditional view of a small scale dairy farm, where a farmer and his family bring the cows in from pasture and hand milk them twice a day in their iconic red barns, is still as strong as ever in today’s society, even though the reality of modern day dairy farming is a million miles away from this.

While figures show that 97 percent of the 51,000 U.S. dairy farms are still family run operations, and that 74 percent of dairy farms have less than 100 cows in them, these farms only account for 15 percent of milk production. This means that 85 percent of U.S. milk comes from giant dairy operations which contain huge numbers of cows at each location. Cows in these facilities are born into a system which treats them as part of a machine. They are seen as money making units which are plugged into the automated system in order to reproduce, produce milk, and provide profits to the owners. Here’s the real story of how milk ends up in your glass:

The cows who produce the milk which ends up in your glass are not being caringly hand milked by farm workers as many people would love to believe, instead they are hooked up to, and become part of, a huge automated milking machine. The natural rhythm of life is not present, the cows do not walk in the fields or feel the sunlight on their backs, and they do not get to bond with their calves after birth.

Calves are taken away from their mothers a day after birth, placed into confined areas, and fed on artificial milk replacer. At 15 months old, they are artificially inseminated and give birth at 24 months. The calf is taken away the next day and milking begins. Shortly after milk production begins, they are artificially inseminated again, and milked until they are dried off two months prior to the birthing date. The cycle continues until the cows milk production rate drops too low, when they will be sent away to the slaughter. According to the Environmental Protection Agency, the average time for this is after just two and a half lactation cycles.

The milking process is conducted by automated milking machines which hook up to the cows udders and sucks them dry twice, and sometimes even three times a day. As well as being extremely painful to the cows, who are connected to the machines every day for months on end, the process is the cause of inflammation and infection, which require antibiotic drugs to treat. The vast majority of farms feed these drugs as standard procedure to reduce the instances of infection.

Mastitis is an inflammation of the mammary glands which is becoming increasingly common among farms using automatic milking machines. The body fights the inflammation by producing more white blood cells (or pus as you might know them), and this ends up in the milk too. There are legal limits of somatic cell count (which is what the industry calls it) in milk, and if the “bulk tank somatic cell count” is below 750,000 per milliliter, it can be sold in the U.S. Levels exceeding 700,000 indicate that more than three quarters of the herd have mastitis, which is a good indication of the standards of hygiene and care set by the industry.

What Else Makes Its Way Into Your Milk

One thing which you’ll almost never hear the dairy industry talking about is the amount of chemical substances which make their way through the process into your glass. In order to produce higher volumes of milk and resist disease and infection while living in the confinement of their factory farms, cows are dosed with a cocktail of drugs throughout their lives, many of which make it into their milk. A study discovered 20 chemical substances in the milk they tested, most of which fell into the categories of anti-inflammatory painkillers, antibiotics, natural hormones, sex hormones, and steroids.

While it may make for uneasy reading, it’s important for people to realize that the dairy industry are superb marketing experts, and the traditional idyllic view of a rural family run dairy farm is a far cry from reality for the vast majority of cows. Cruelty, suffering, pus, chemicals, and hormones are all present in the milk which makes its journey to your glass through these mechanized dairy prisons.