The Cruelty Behind Sled Dog Races

When I lived in Alaska, the annual “Iditarod” sled dog race ran right past my office window in downtown Anchorage. It is a major commercial event for the state: the winning mushers earn cash prizes and become Alaskan celebrities. For the dogs, however, the 1,000 mile race means days of suffering and, for some, even death. On March 1, 2014, the Iditarod begins and teams of dogs will be forced to pull a sled over miles across the Alaskan wilderness, often running at a grueling pace of up to 100 miles per day for seven to ten straight days.

Dogs love to run. Anyone who shares life with a canine companion knows this, and some breeds are especially athletic. My own dog, Eve, is my hiking companion and can easily wear out other dogs while racing for a stick or a ball, over and over again, even at twelve years of age. But nobody throws a dog’s ball 1,000 miles before yelling fetch! From the Iditarod website:

A race covering 1000 miles of the roughest, most beautiful terrain Mother Nature has to offer. She throws jagged mountain ranges, frozen river, dense forest, desolate tundra and miles of windswept coast at the mushers and their dog teams. Add to that temperatures far below zero, winds that can cause a complete loss of visibility, the hazards of overflow, long hours of darkness and treacherous climbs and side hills, and you have the Iditarod.

The race is supposed to be a recreation of a historic event: the rushing of a diphtheria vaccine by sled to Nome in 1925 during an epidemic. During that actual, life-saving mission, the vaccine was carried not by a single dog team but by relay. It was understood that it made no sense to run dogs so far. Today, the event has become a corporate-sponsored money-maker – each participant pays an entry fee of more than $3,000, and winnings of up to $650,000 are shared among the top thirty.

The Iditarod puts animals’ lives at risk. Big game animals like elk and moose, who get in the way of the race, may be killed. Injured or “dropped” dogs are left alone at checkpoints with their paperwork, four pounds of dog food, and a chain. All dogs remain tethered at all times. “Rule 42″ regarding an “expired dog” states that “all dog deaths are regrettable, but there are some that may be considered unpreventable.” 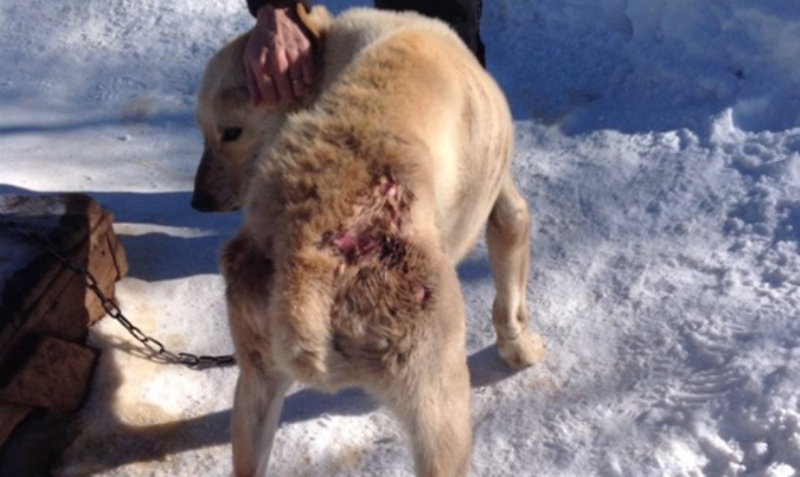 In some states, dog sledding conditions might be considered criminally cruel. California’s cruelty law makes it a crime to inflict “needless suffering” or “unnecessary cruelty” upon an animal, particularly by overworking an animal. Violations can result in up to three years in prison and fines of up to $20,000. However, Alaska’s cruelty law conveniently “does not apply to generally accepted dog mushing or pulling contests or practices.” The industry itself defines “generally accepted” practices, and protects itself from meaningful scrutiny.

Since the race began decades ago, more than 140 dogs have died during the event—from heart attacks, pneumonia, muscle deterioration, dehydration, diarrhea, and spine injuries. They are impaled on sleds, drowned, or accidentally strangled. According to the Sled Dog Action Coalition, during the off-season, the dogs are crowded into small kennels with no state management or oversight. Many are tethered on short chains at all times, unable to play, forced to sit, stand, and lie in the same small area in which they eat and defecate. When the dogs are no longer profitable, they are destroyed.

And it’s not just the Iditarod. “Sled dogs” are treated cruelly in other states as well – on the trail, and off. Last month, CNN reported a story of a Colorado sled dog operator charged with animal cruelty when investigations revealed starving, sick, and constantly tethered dogs left out in the cold. The owner has been charged with eight counts of animal cruelty.

Please take action to help ALDF speak out for sled dogs by asking the corporate sponsors of events like the Iditarod to withdraw their support. Take action here.