In November 2020, Tammy Thies, Founder and Executive Director of The Wildcat Sanctuary, rescued four adult big cats – two tigers and two lions. They were located at a private backyard menagerie in a rural part of Indiana and their owner had died. 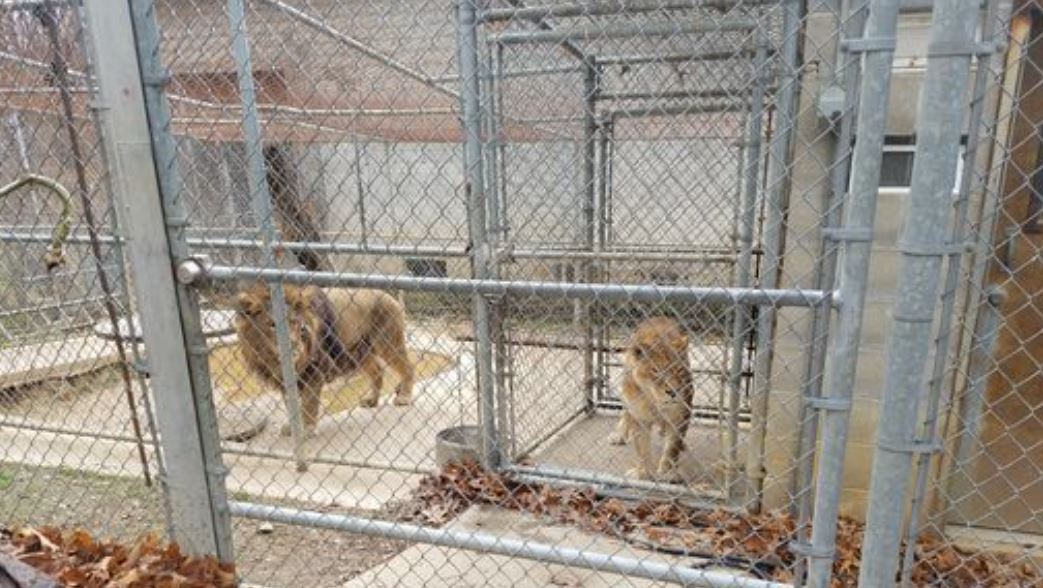 For years, this facility had repeatedly bred their big cats. They sold the cubs on the Internet or to cub-petting operations where the cubs would be exploited for profit.

Tammy was very happy to be rehoming the four cats from their small cages to her accredited sanctuary for rescued exotic cats in Minnesota. There, she could give them a forever home where they’d enjoy peace, proper nutrition, and veterinary care, as well as large natural habitats to roam with plenty of platforms, dens, and toys. Their new home would be a world away from the tiny, barren, cement-floored cages and lack of vet care these big cats had previously known. She was also thrilled to know that once The Wildcat Sanctuary took possession of these cats, she would effectively be shutting down a backyard breeder. 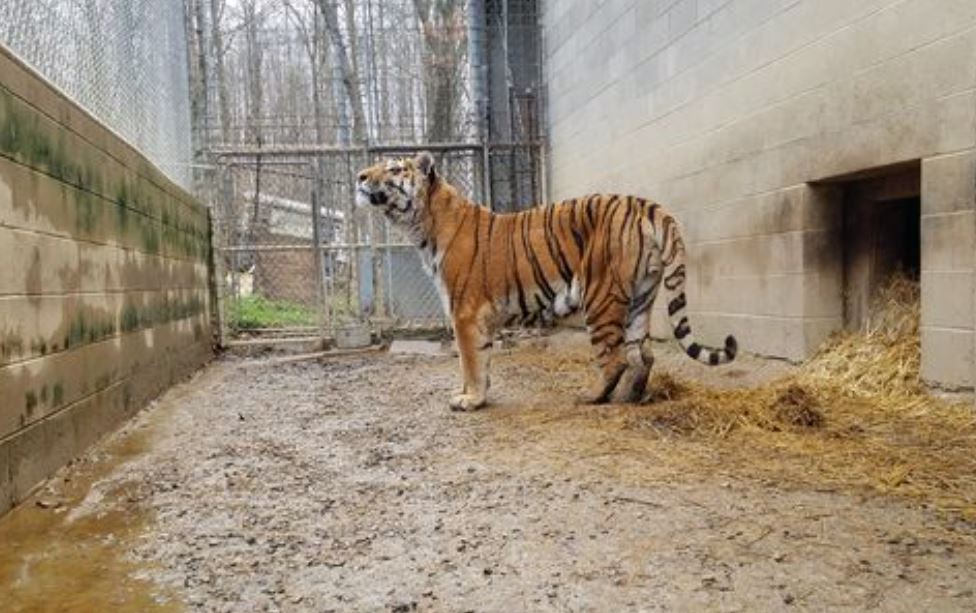 Never again would cubs be bred at the facility only to be snatched away from their mothers shortly after birth, sold to exhibitors, used as props for photo ops with the paying public. She would be ending this cruel cycle there forever. But, as soon as Tammy and her rescue team got close to the facility, she knew this rescue would be challenging.

A single-lane unpassable road wound a quarter of a mile before reaching the area where the cages were holding the cats. The terrain was so rough there was no way the transport trailer they brought would make it up the hill. Both sides of the road were filled with piles of scrap metal, cars, rusting appliances, and more junk. But Tammy still had no idea just how challenging the day would become – the most difficult in her 20 years of rescuing exotic cats.  As Tammy approached the cage containing tigers Marcus and Winona, she saw something that almost dropped her to her knees. 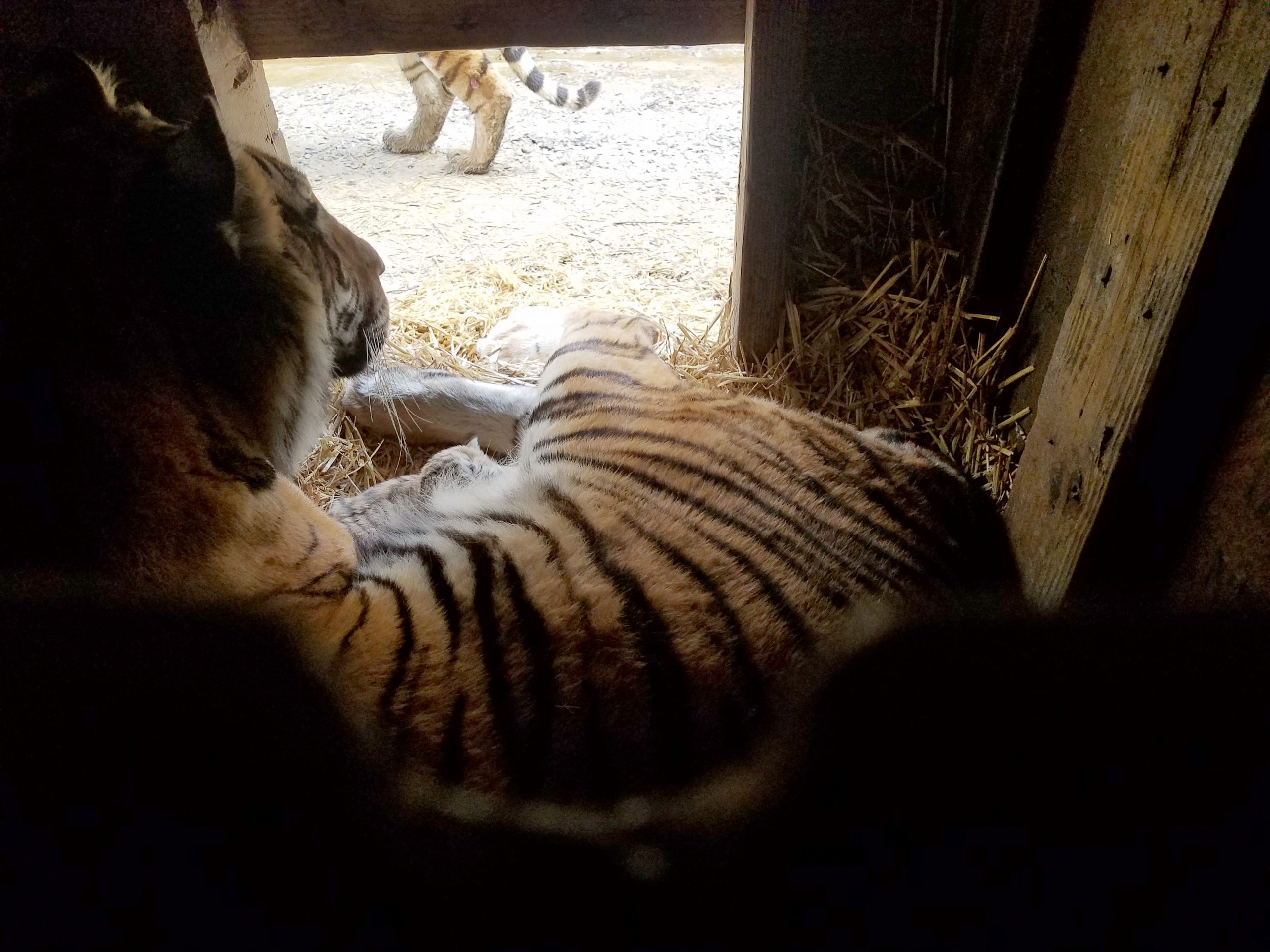 “As I looked down, my tears started to flow in a swirling combination of shock, stress, fear, and sadness,” explained Tammy. “There on the floor, nestled against Winona’s stomach, lay a tiny cub. He was just a few hours old, with his umbilical cord still attached. We certainly weren’t expecting to rescue a fragile newborn that day!”

Before Tammy and her team arrived, they’d been told Winona had given birth just five months earlier. Like so many others before, that cub had also been sold.

In the wild, tigers, tigers have a litter approximately every two years. But in captivity, when breeders pull the cubs from their mother, their mother goes back into estrus. This means she can be bred several times a year.

Just as Tammy noticed Dash, so did his father, tiger Marcus, who was living in the same shared cage. He tried to go after the cub. 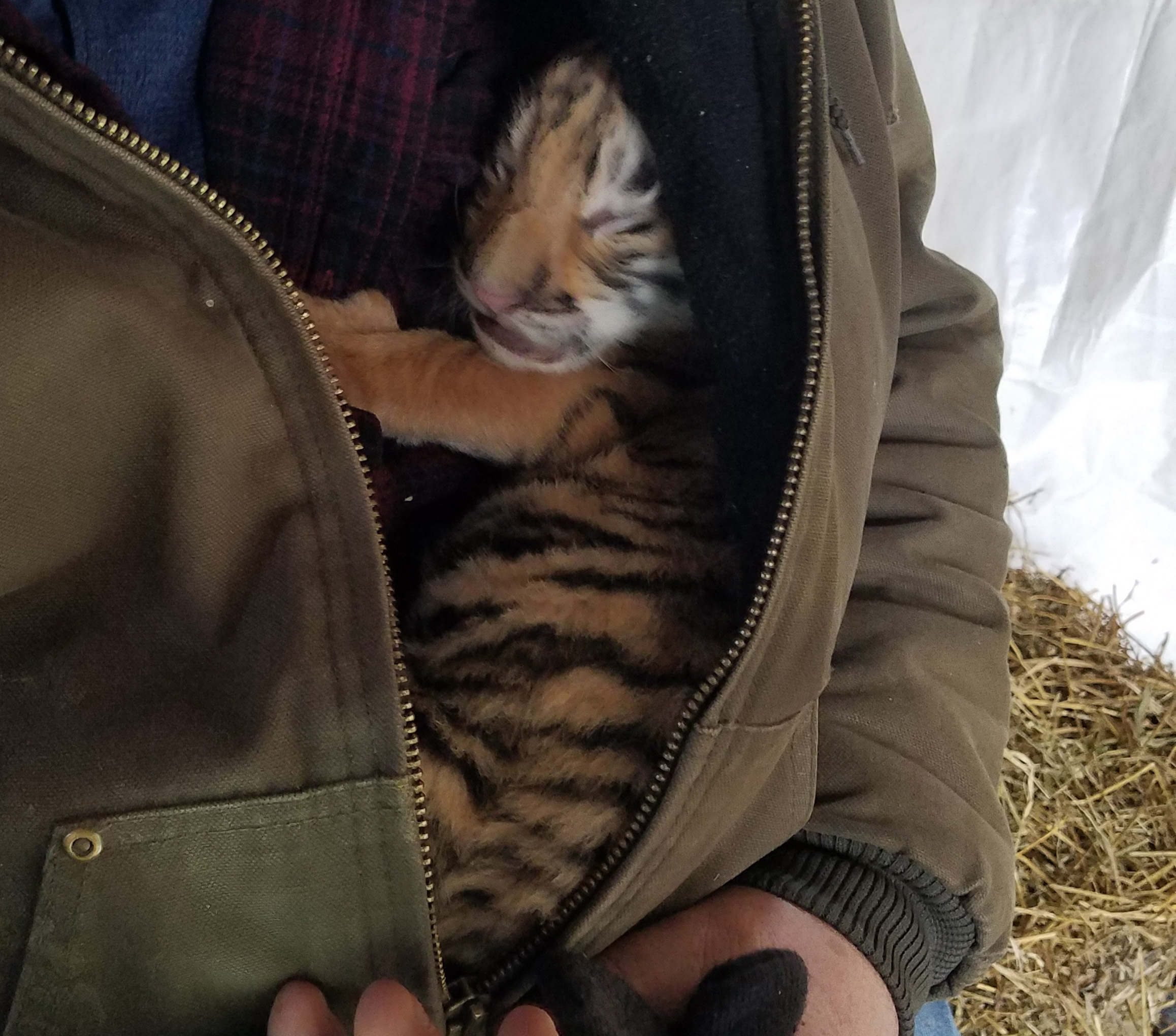 The rescue team had no choice but to sedate and load Winona, Marcus, and the two geriatric lions in order to save all the cats, including baby Dash.

Once the big cats were safely loaded, Winona was understandably distraught from recently giving birth, defending her cub from Marcus, being sedated, and then loaded into her transport. It was not safe to put Dash back with her.

For Tammy, knowing that Dash could not be raised by his mother was the most devastating of all. The only peace she had was knowing this cub would not be sold and Winona would never have to go through being bred and losing a cub again. Little Dash initially received round-the-clock care for weeks, with Tammy as his primary caregiver. 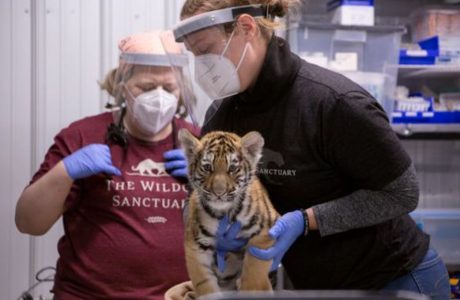 Now he’s 15 weeks old, growing by leaps and bounds (literally), and will live a wonderful life “wild at heart” at The Wildcat Sanctuary, knowing only love and proper care. He’ll never be exploited as a pay-to-play prop or used as a future breeder for the cruel cub petting industry.

Be sure to follow Dash’s progress as he grows and hits new milestones daily! You can join his very own Facebook page HERE. Also, learn how you can help us end cub petting for others, just like Dash, by watching and sharing this video:

You can help us provide wonderful homes for rescued cats, just like Dash and his parents Winona and Marcus (pictured today enjoying their new life at The Wildcat Sanctuary) by supporting the sanctuary at www.wildcatsanctuary.org. 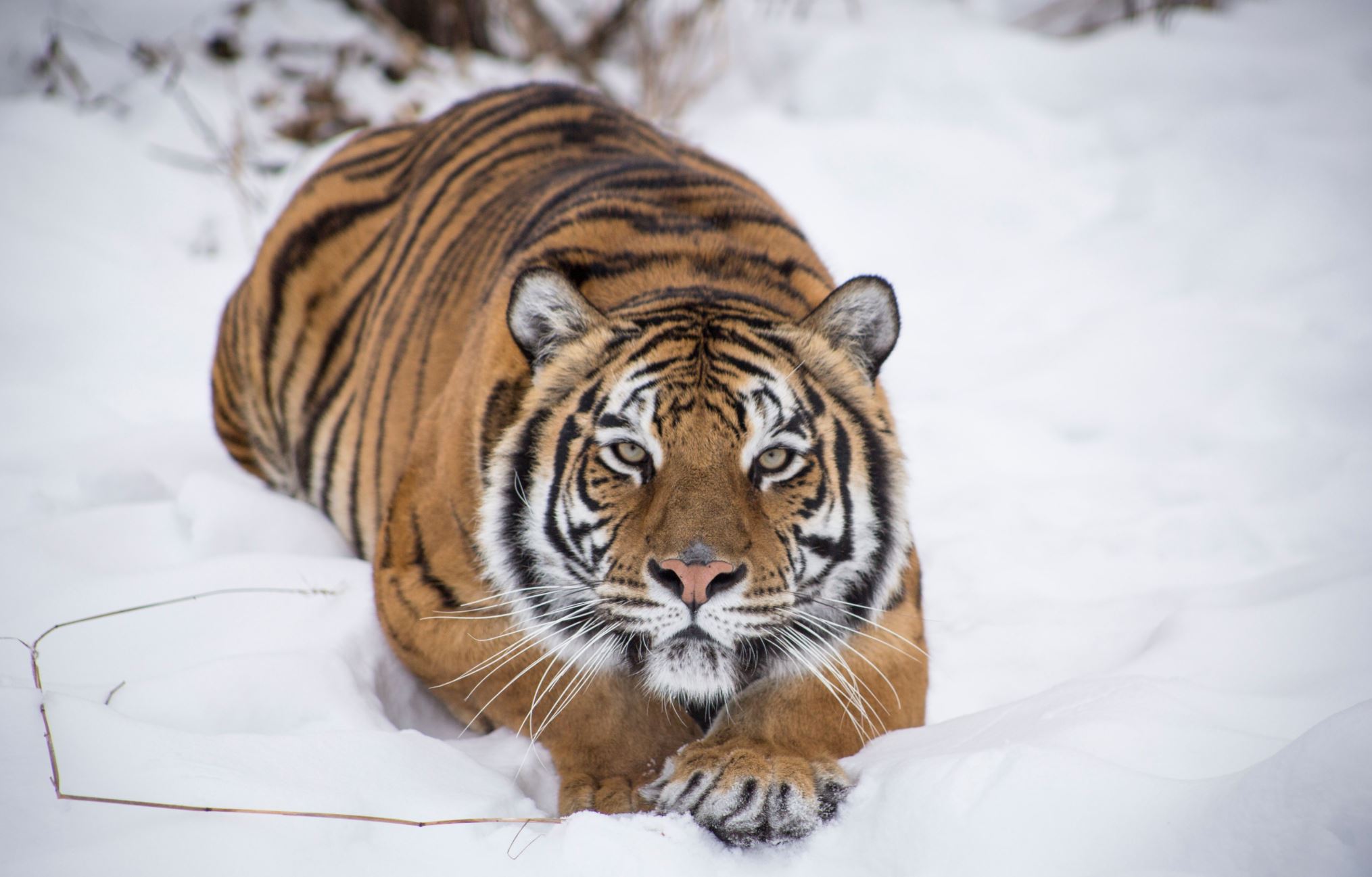 Photo of Winona Courtesy of The Wildcat Sanctuary 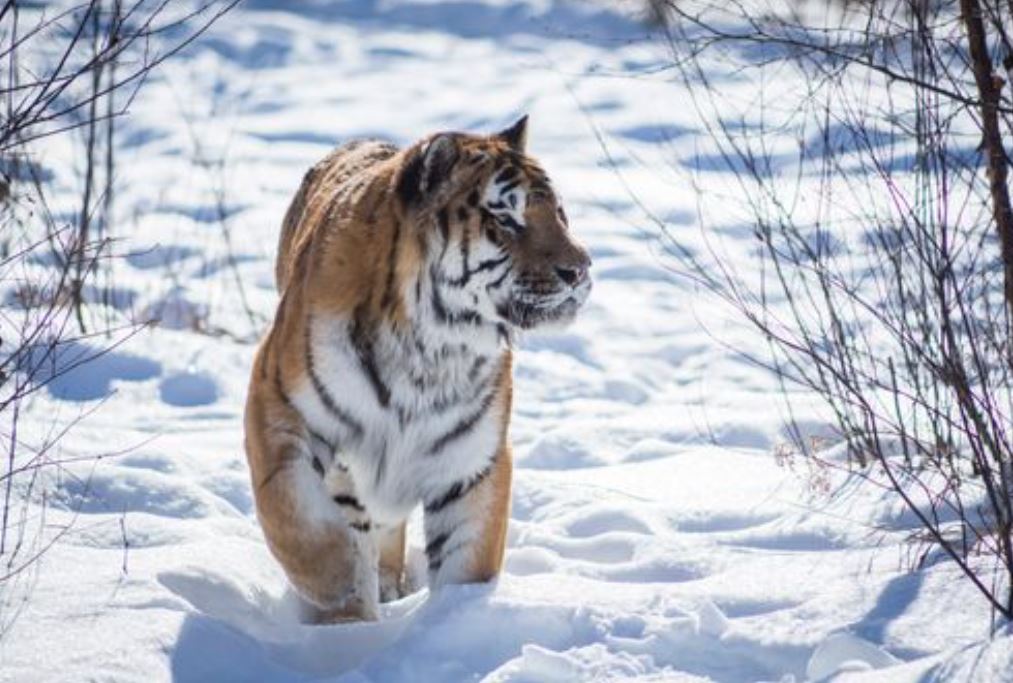 Photo of Marcus Courtesy of The Wildcat Sanctuary