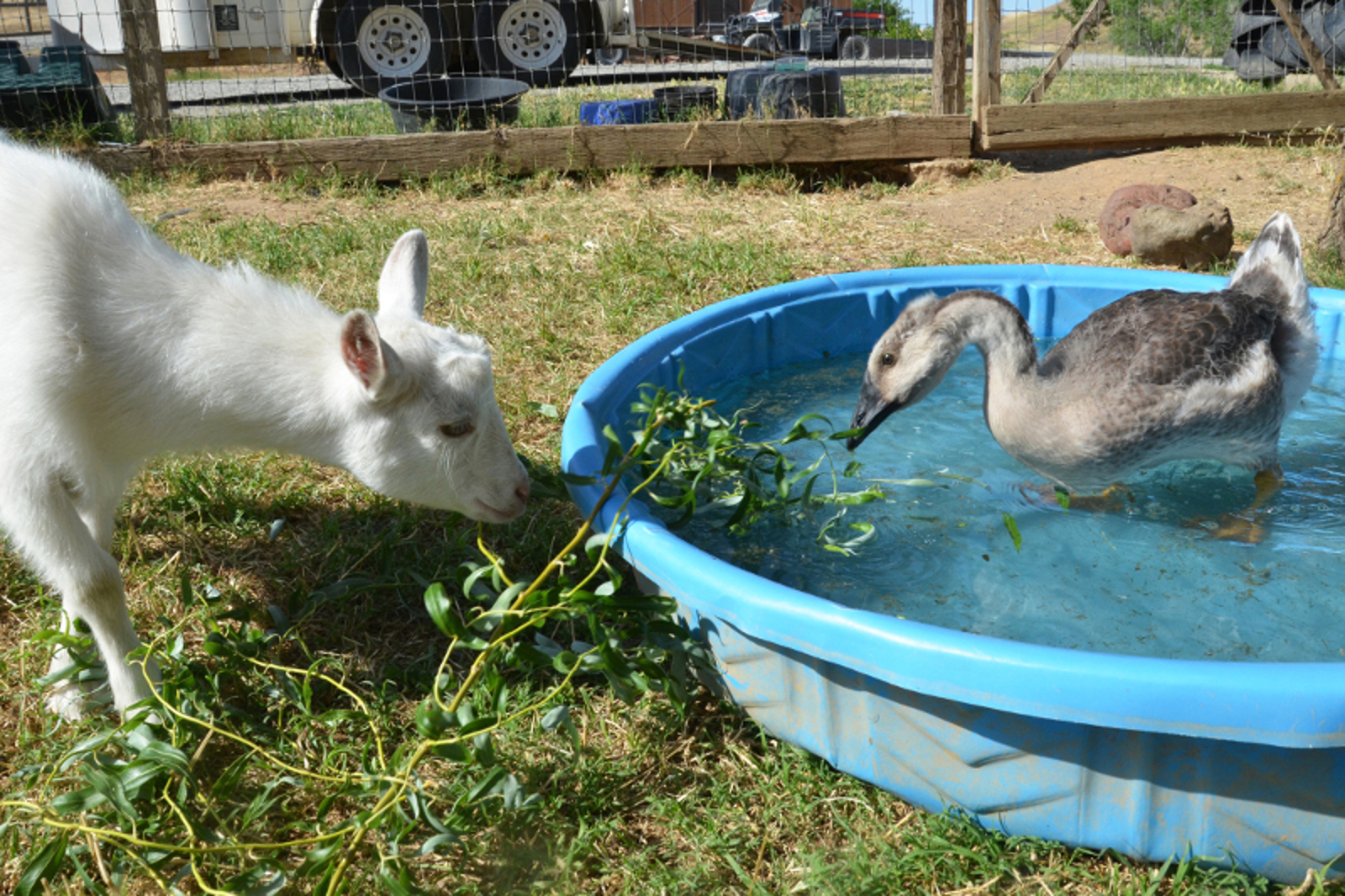 So I’m sure that when you saw the name Ryan Gosling in the headline of this post, your first reaction was something like this:

And I am sorry for misleading you, well not really, because there is a Ryan Gosling in this story – just not the one you might know. This Ryan Gosling is equally as adorable as his human counterpart, and in fact, he may possibly be even more awesome than this dude because he is best friends with Hemingway.

Again, not that Hemingway, Hemingway the goat! This dynamic duo are taking over Farm Sanctuary with their mind-blowing adorable-ness (a description that would make the real Hemingway roll over in his grave, I am sure).

But enough about their famous namesakes! Hemingway the goat and Ryan Gosling the goose are two recent rescues that have found their forever home at Farm Sanctuary‘s Northern California shelter. In true odd-couple fashion, the pair have become best friends, helping one another to recover at the sanctuary. 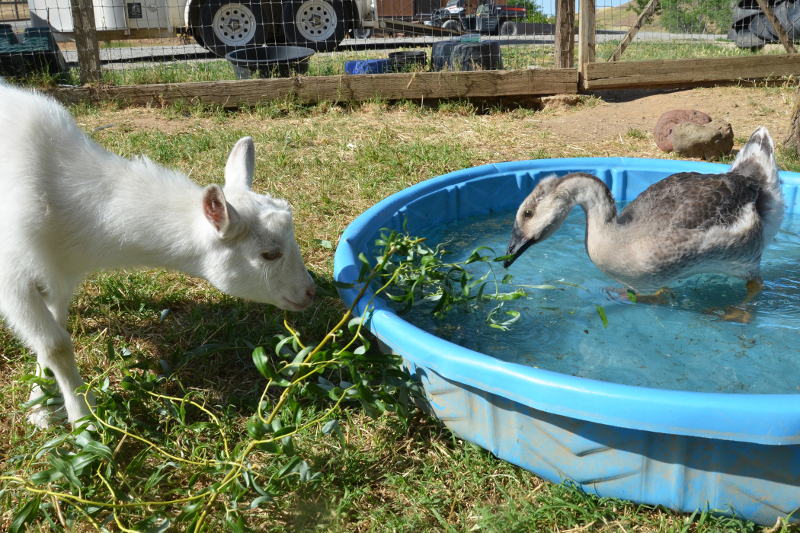 Hemingway was taken in by the sanctuary after being left, anonymously at their front gates. A skinny, 6-week-old kid, Hemingway was not bouncy and energetic like other goats, but appeared subdued as if worn from hunger. While the details of Hemingway’s past are unknown to his rescuers, it is clear that he had been sorely neglected and was in dire need of some TLC. Hemingway is a Saneen goat, a variety that is popularly used for milk production, so it is possible that he had been rescued from life on a stockyard. 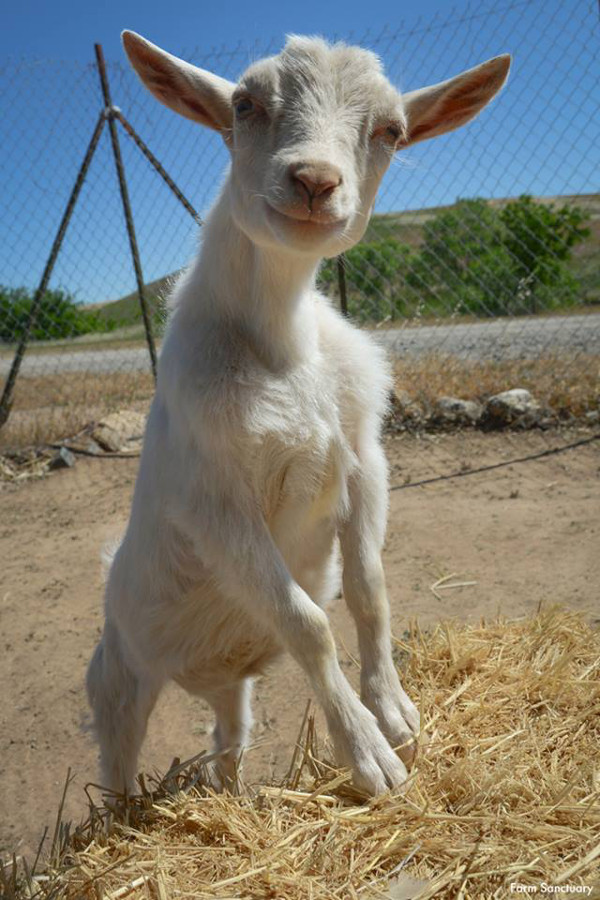 Hemingway was immediately taken for veterinary care, treated for parasites, and put on a nutritious diet of grass hay supplement and timothy hay. In no time at all, Hemingway began to gain some weight and come into his “gregarious” personality, common among goats.

Goats typically thrive in social settings, where they can interact with their herd mates. Since Hemingway did not have any herd mates to speak of, he took on another rescued friend to be his companion. 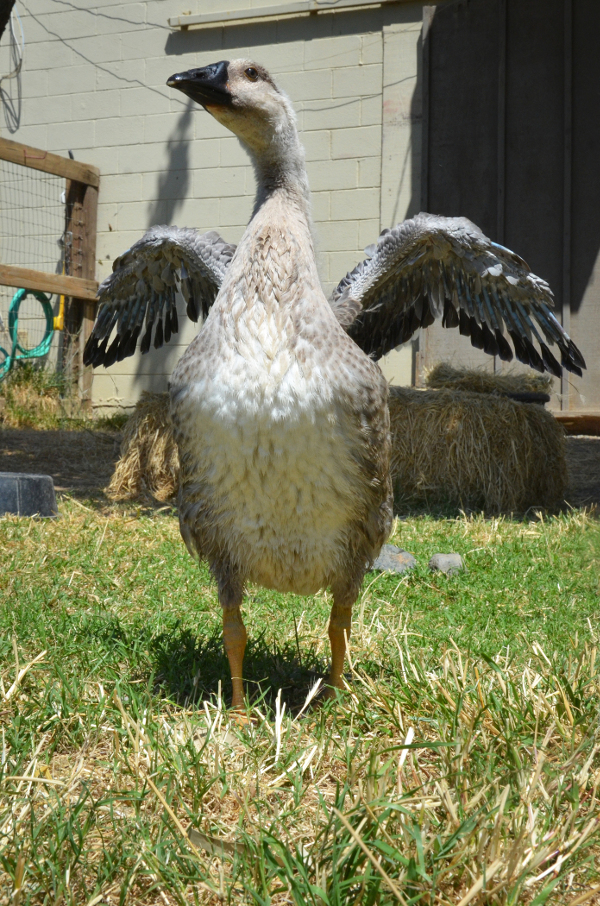 Ryan was dropped off at a shelter in Los Angeles. Since the facility was not equipped to take long-term care of farm animals, Mr. Gosling was brought to Farm Sanctuary.

Unlike other geese, Ryan has unusually large, bowed joints which Farm Sanctuary believes is the result of a congenital condition. As a result, this little gosling has some trouble moving around, but he is quickly becoming more active as he adjusts to life at the sanctuary. 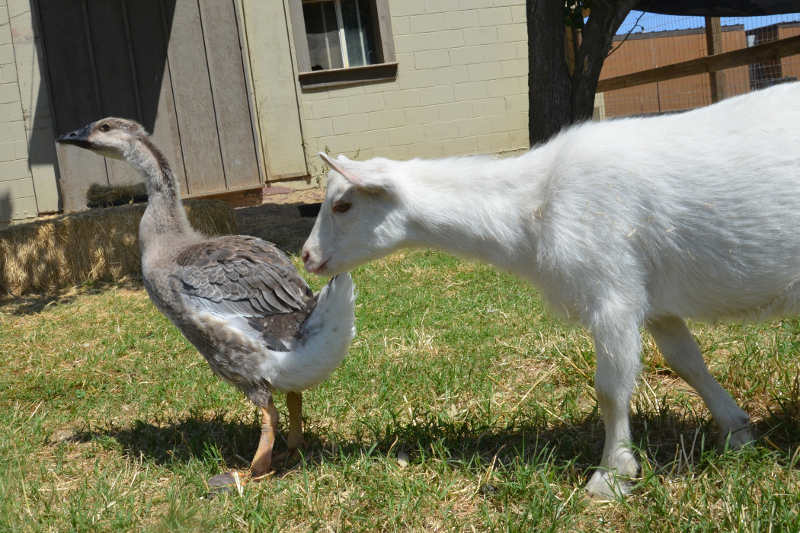 Kerrie Wooton, the shelter manager, tells OGP the two, ” mostly spend time together in their yard, waiting for visitors to come by. Ryan especially is attached to people and likes to be held. Hemingway is becoming more and more like a goat every day, running and jumping around,” she continues, “We will take him for walks around the sanctuary, and while he has a good time, Ryan becomes distressed being left alone. So we make sure he has company while Hemingway goes for his walks.”

It is clear that this friendship has been greatly beneficial to both these ailing animals. Wooton explains, “They were both very lonely, but having each other has changed how they spend their days – instead of crying out every time people walk by, they now feel more at ease because they have one another, even if they aren’t directly interacting.”

And what a wonderful pair of friends they are, don’t you think?

Wooton explains to OGP, these two are just like human babies, “[they] want love, comfort, and companionship. Animals of different species can be friends and bond with one another. Their relationship demonstrates animals’ emotional needs and how they behave in order to be happy.”