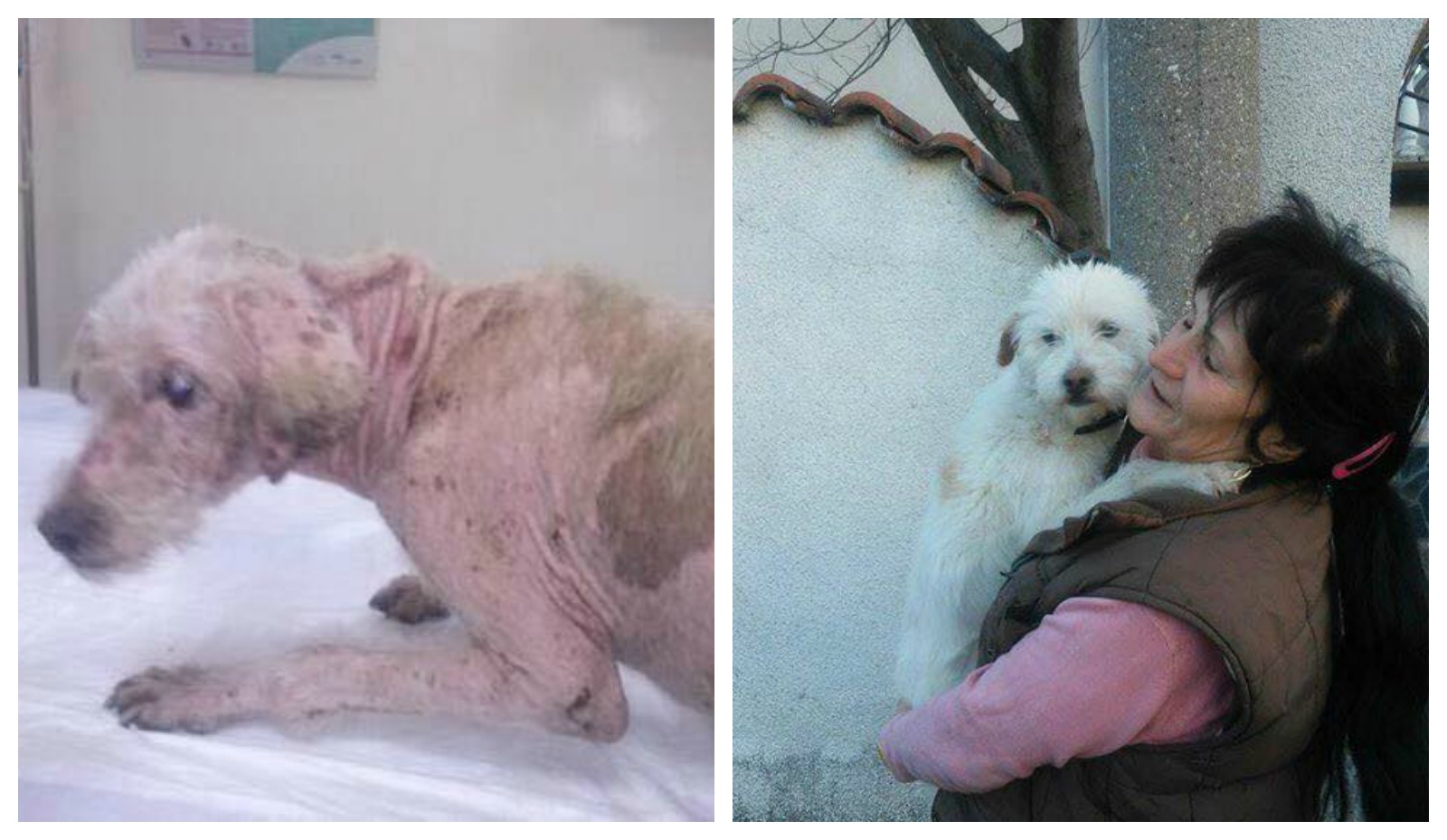 Rocco the dog spent the first two years of his life living on the streets in Bulgaria. Without any form or care or protection, he developed multiple health problems including anemia, mange, and a fungal skin condition, among many others.

The combination of these ailments caused poor Rocco to lose all of his fur, leaving him completely exposed to the elements as the cold winter rolled in. This poor pup was not only subjected to the elements, but also to the cruelty of the local people who would throw stones at him as he rummaged through garbage bins for food. Street dogs are regarded as pests in Bulgaria and are rarely shown compassion. This all changed when Desislava Stoyanova stepped in and decided to rescue Rocco from this life. 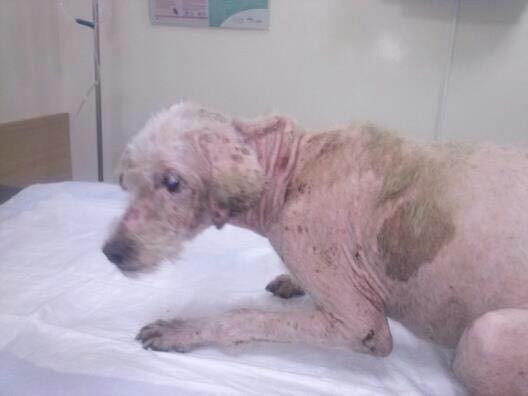 After witnessing a group of kids trying to dismember a street cat by pulling at her paws, fourteen years ago, Desislava Stoyanova dedicated her life to helping as many animals as she can. She does not have many resources at her disposal to help the needy animals of Bulgaria, so she has to be a little creative to do the most that she can.

To help care for all these animals and many others, Stoyanova manages a Facebook page called Save Me where she posts photos of stray animals in need of help to encourage people to make donations for their care or consider adopting an animal if they are able.

When she spotted Rocco, the near skeletal dog whose eyes she describes as being “full of sadness,” she immediately came to his rescue and took him to the vet. She knew from the scabs and lesions on his skin that something was wrong.

The Road to Recovery

Rocco needed to stay in the vet clinic for over a month, as the mange and other skin conditions he suffered from were contagious. He was put on a series of medications that needed to be administered every day if the pup was going to have a shot at recovery. In all, it took around eight months for Rocco to fully recover. His appetite returned, his tail started to wag again – and his gorgeous, fluffy white fur came back completely. 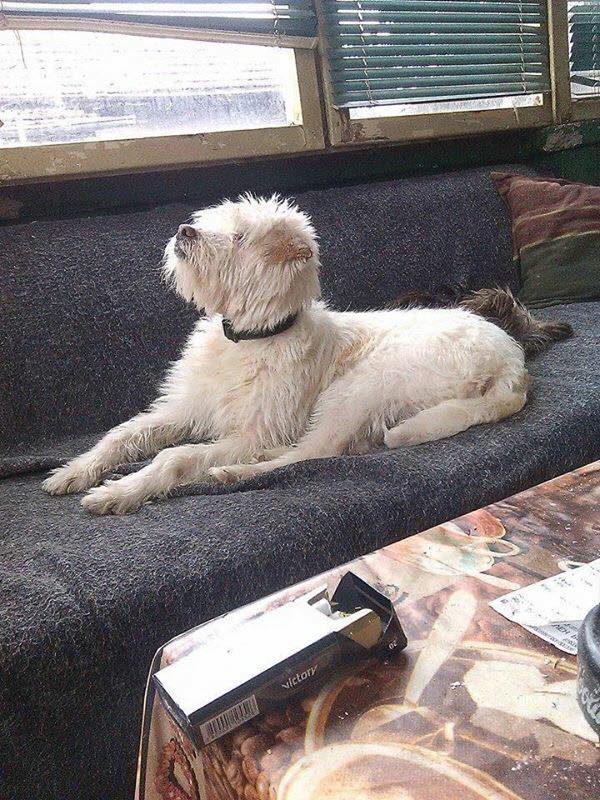 The total cost of all his treatment was over $550.  But thanks to donations from kind people, Desislava managed to cover all the costs.

Given the fact that she was already caring for so many animals, Desislava knew that she would have to help Rocco find a forever home, so she turned to her Save Me Facebook followers for help. She uploaded Rocco’s story and pictures, pleading for somebody to adopt him. Eventually, one compassionate woman saw Rocco’s story and instantly fell in love with him. Finally, after a long and lonely two years, Rocco found a forever home and a loving family. He also lives with another dog and they’re both great friends!  Rocco never lost fur or grew hungry again. Indeed, he had the happy ending he so greatly deserved. 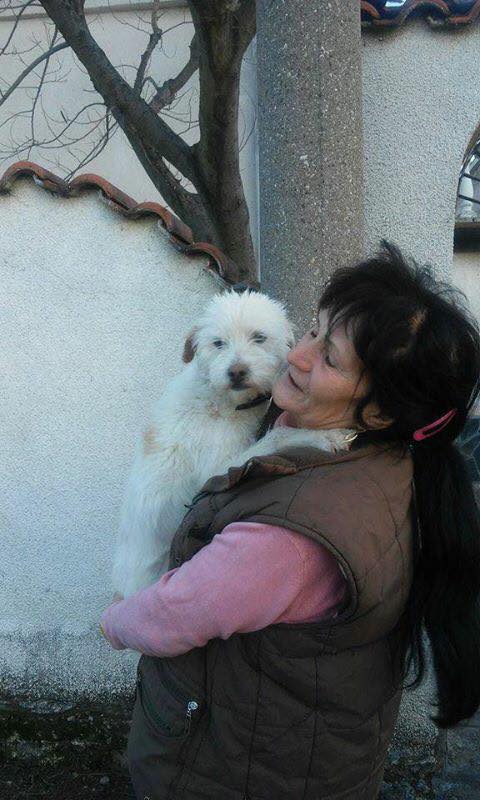 Others Need Your Help!

So many homeless cats and dogs are spending every day of their life, fighting for survival on the streets of Bulgaria. Thanks to truly amazing people like Desislava, abused and neglected animals get a second chance at life. But she needs your help. She is working alone to help rescue animals off the streets and sadly, her love for these animals alone won’t foot the steep veterinary bills.

“As you can probably understand, everything I do requires daily food and litter supply and often, the vet bills are quite high, but I just can’t bear letting a soul suffer so I am forever in debt with the clinic at which the animals get treated,” Desislava tells One Green Planet. “I need urgent support. Any help counts.”

If you would like to help Desislava save more lives, you can send a donation here.

The next time you see a homeless animal on the streets, roaming the garbage bins, take a moment to step into their shoes. Some of the cats and dogs you see have lived on the streets their entire lives. Others may have been abandoned at some point or another, thrown out of their home. Either way, life is hard for a homeless animal. Why not make it a little easier for them by feeding them? Even better, urge your friends to take in a homeless animal rather buying a pet from breeders or pet stores. And remind them to get their new companion spayed to conquer pet homelessness. Together we can insure a better future for all animals.