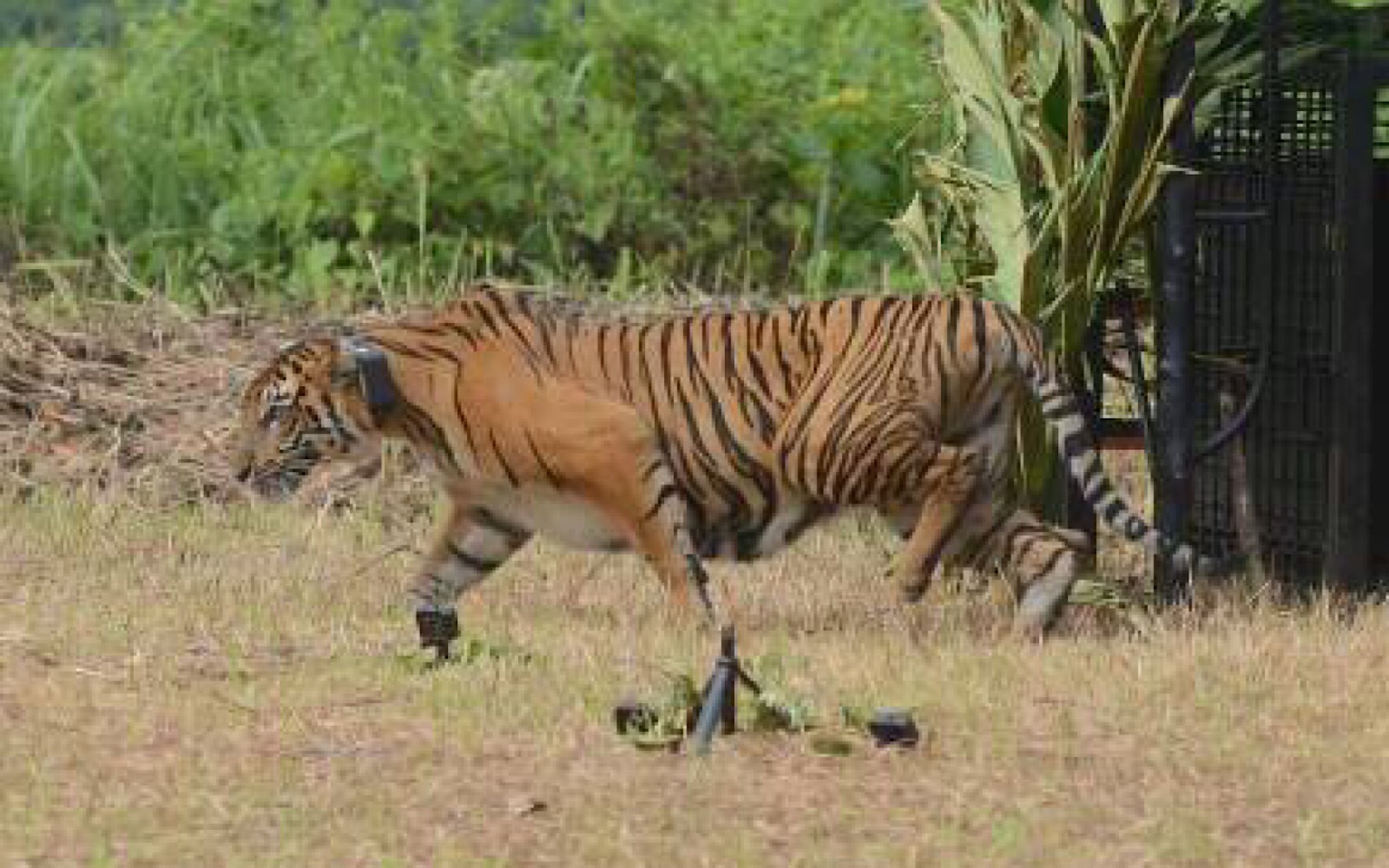 In October 2015, our partner Tambling Wildlife Nature Conservation (TWNC) found an abandoned three-month-old female Sumatran tiger cub in a national park in Sumatra, Indonesia. A medical exam revealed the cub was in critical condition, suffering from a maggot-infested abdominal wound that the team later determined was inflicted by another wild tiger.

It was a miracle she was alive.

Wildlife veterinarians and keepers at the tiger rescue center run by TWNC took to the cub’s care, spending 20 months valiantly rehabilitating her. The mortality rate for young tigers can be extremely high, as they may starve or fall victim to male tigers or other animals. 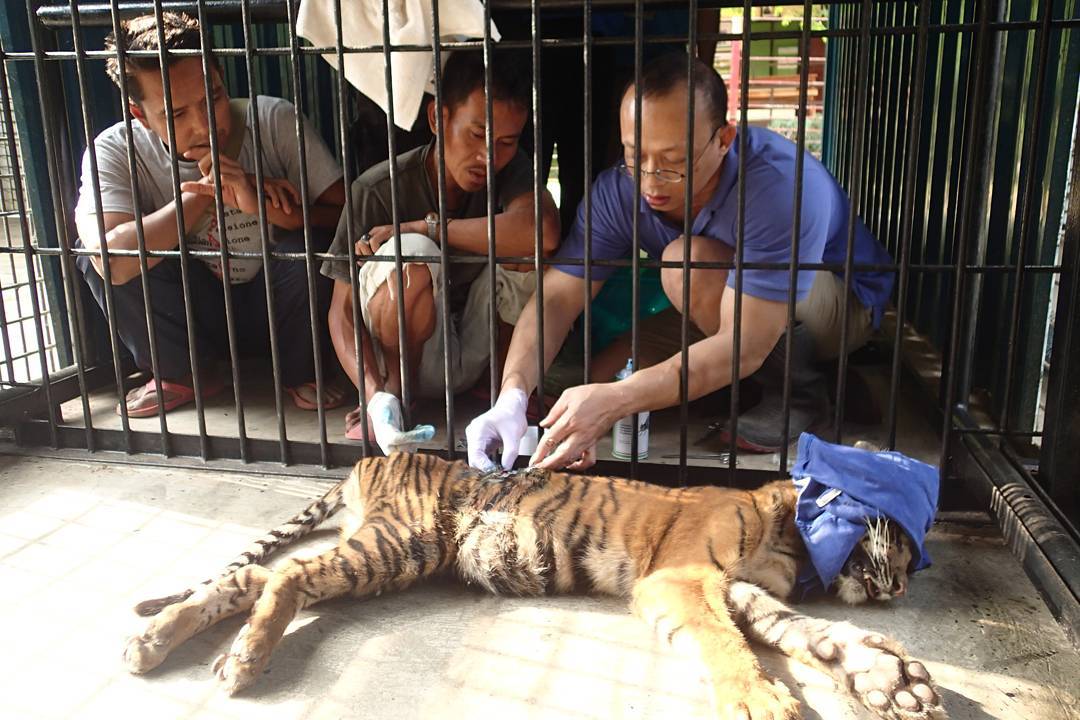 In addition to conflict tigers, the rescue center aims to rehabilitate tigers like this one — named Muli, the word for “girl” in the local Lampung dialect — striving to maintain their wildness so they can have a shot at survival when returned to their natural habitat. Following a strict protocol, Muli had minimal human contact and was fed live prey to encourage hunting behavior. By the end of her time at the center, her wounds had healed nicely and she was healthy enough to be released back into the wild.

Last month, I was privileged to join a team of wildlife veterinarians and biologists from Taman Safari Zoo and TWNC, respectively, to prepare for Muli’s release. I was tasked with fitting Muli with a satellite GPS collar to track her movements; it automatically drops off after six months. Her last health check confirmed Muli was in excellent condition, and that she had reached sexual maturity and is ready to breed! 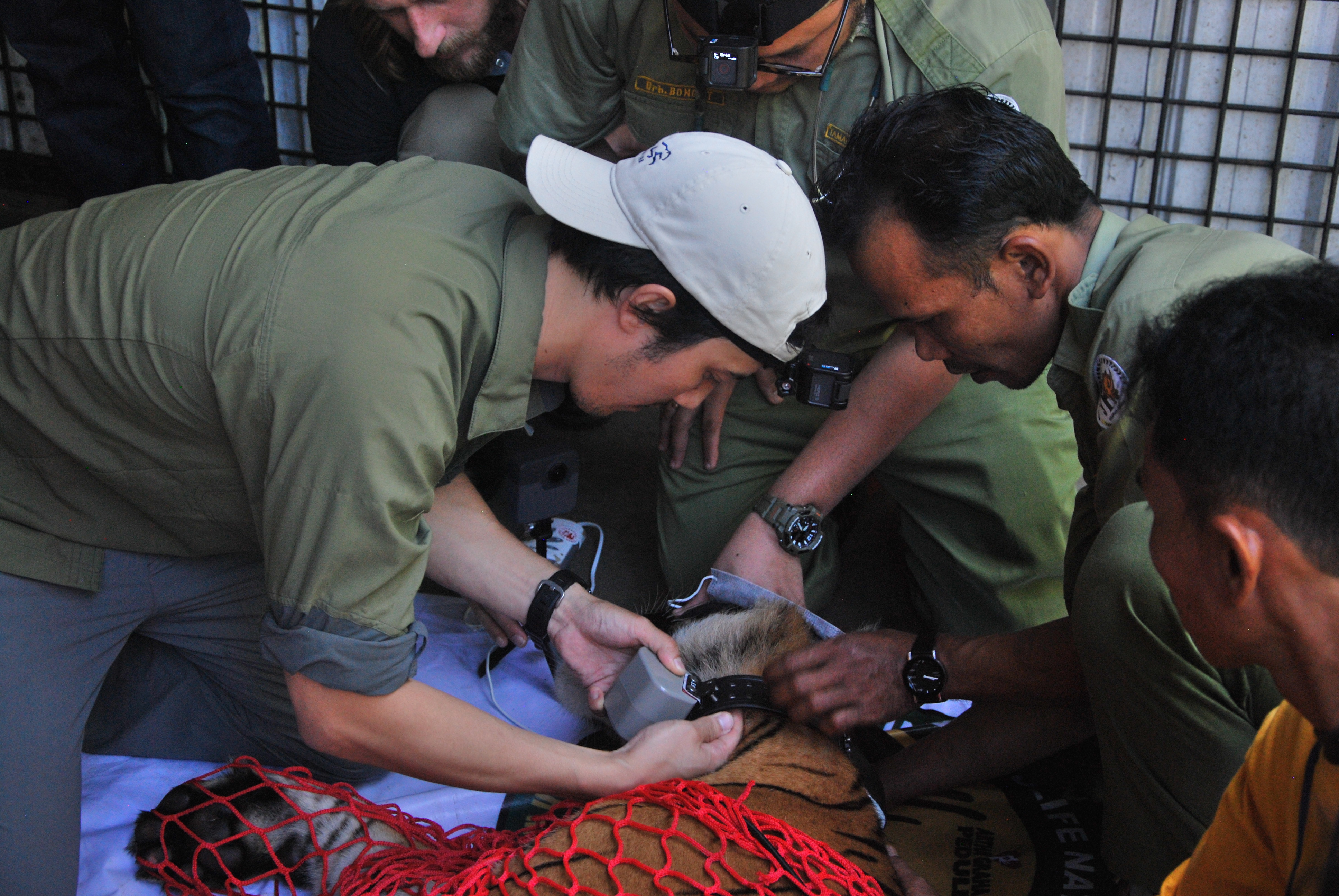 Early the next morning, as the forest mist began to settle, the TWNC staff and some special guests gathered on an observation platform. With everyone keen to know which direction Muli would take into the forest, all eyes were fixated on her cage. It opened — and although she was hesitant at first, she scurried into the undergrowth before returning to the forest.

Sumatran tigers are classified by the International Union for Conservation of Nature (IUCN) as Critically Endangered. With only 400–500 left in the wild, every individual counts. Muli’s survival is, therefore, of the utmost importance.

The satellite GPS collar will allow her movements to be tracked in real-time. If Muli were to venture near villages or other human dominated landscapes, such as agricultural farmlands, TWNC would receive alerts allowing them to mount timely and appropriate actions to ensure her safety and that of the local people.

Muli recovering in a holding cage after her medical checkup. 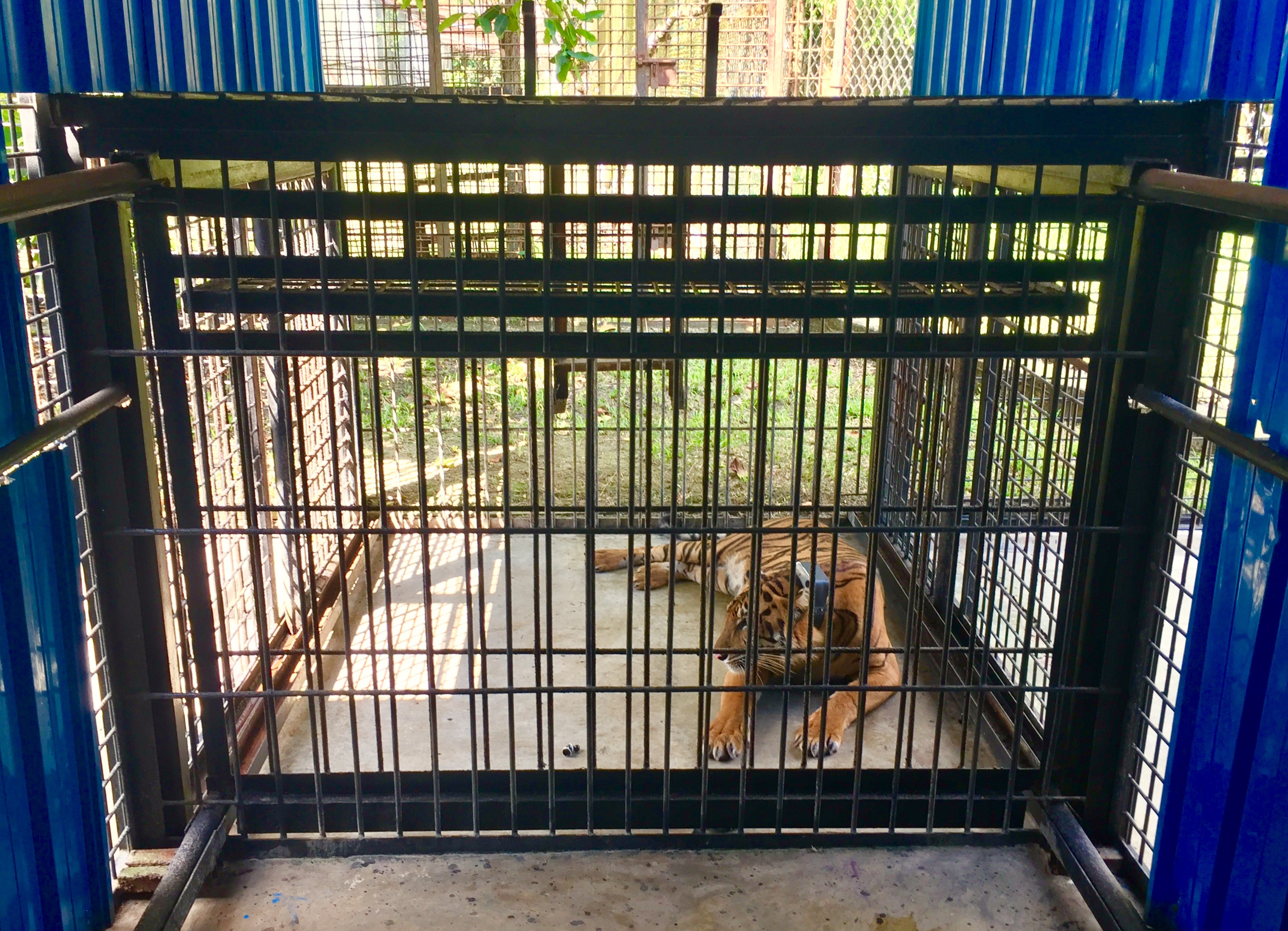 So far, the data shows that Muli has stayed away from the villages and is moving safely into the wider protected landscape in search for her permanent territory.

By rehabilitating and releasing tigers like Muli, we can strengthen the Sumatran tiger population and play a role in supporting the species’ recovery. Since 1998, TWNC has rehabilitated eight tigers, five of which have been returned to their natural habitat.

TWNC is on the frontlines working to protect Sumatran tigers and their forest habitats with world-class commitment to law enforcement. Whereas the area now managed by TWNC historically made headlines for its rampant loss of forest and wildlife, it today represents a beacon of hope. Key tiger prey, such as sambar deer, muntjac deer, and water buffalo, now roam in abundance, and there’s no human-tiger conflict in neighboring villages. 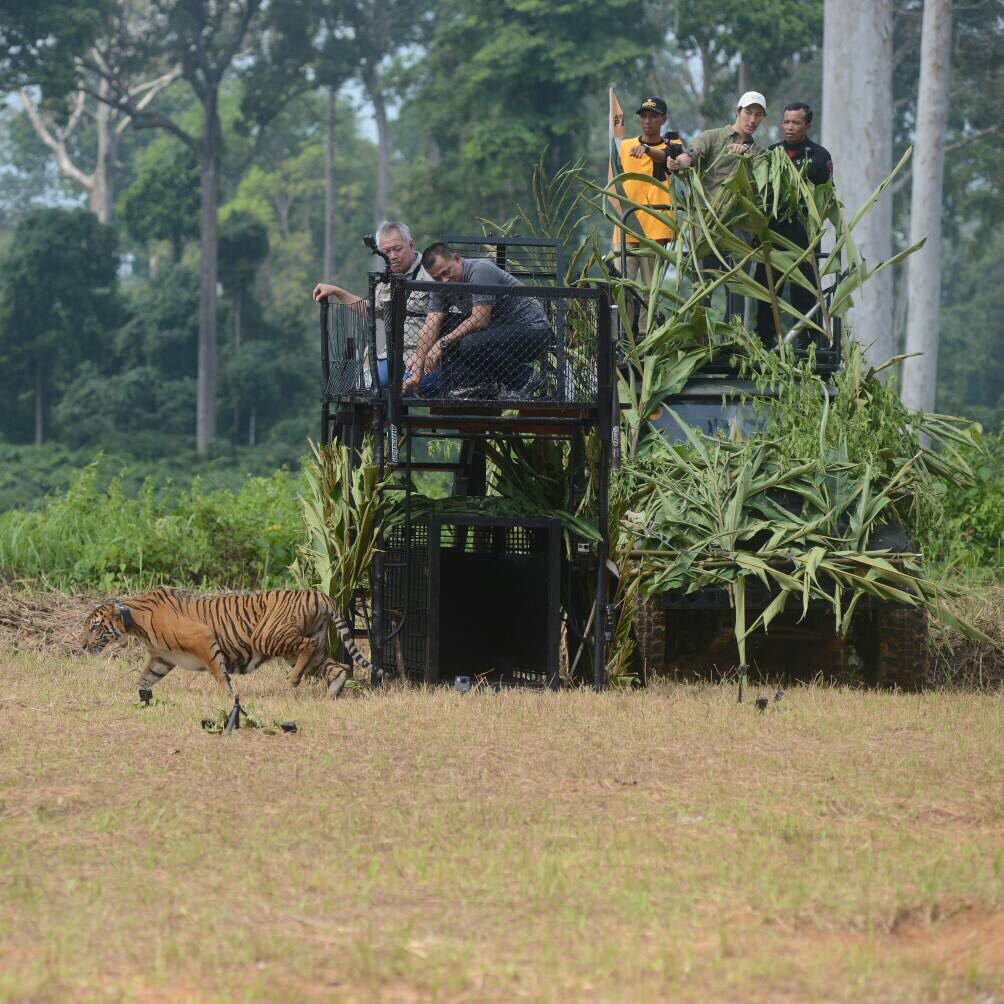 In 2012, Panthera’s Tigers Forever program began a partnership with TWNC to provide technical expertise in law enforcement, site security, and biological monitoring. TWNC’s first park-wide tiger survey in 2013 produced astonishing results: A total of 25 tigers were detected over a nine-month period, with a density estimate of 3.5 tiger individuals per 62 square miles (100 square kilometers) across the whole area and as high as 5.8 individual tigers per 62 square miles in the south of the park.

This represents the highest known tiger density anywhere in Southeast Asia and a remarkable natural population recovery. This is important, as Tambling connects directly to the Bukit Barisan Selatan National Park (BBSNP) and constitutes a vital source site of dispersing tigers in Southern Sumatra. To date, the TWNC continues to document new individuals and females with cubs on camera traps.

Tambling serves as one of the most promising landscapes for tiger conservation — and the ideal site for Muli to have a fighting chance to thrive long into the future.