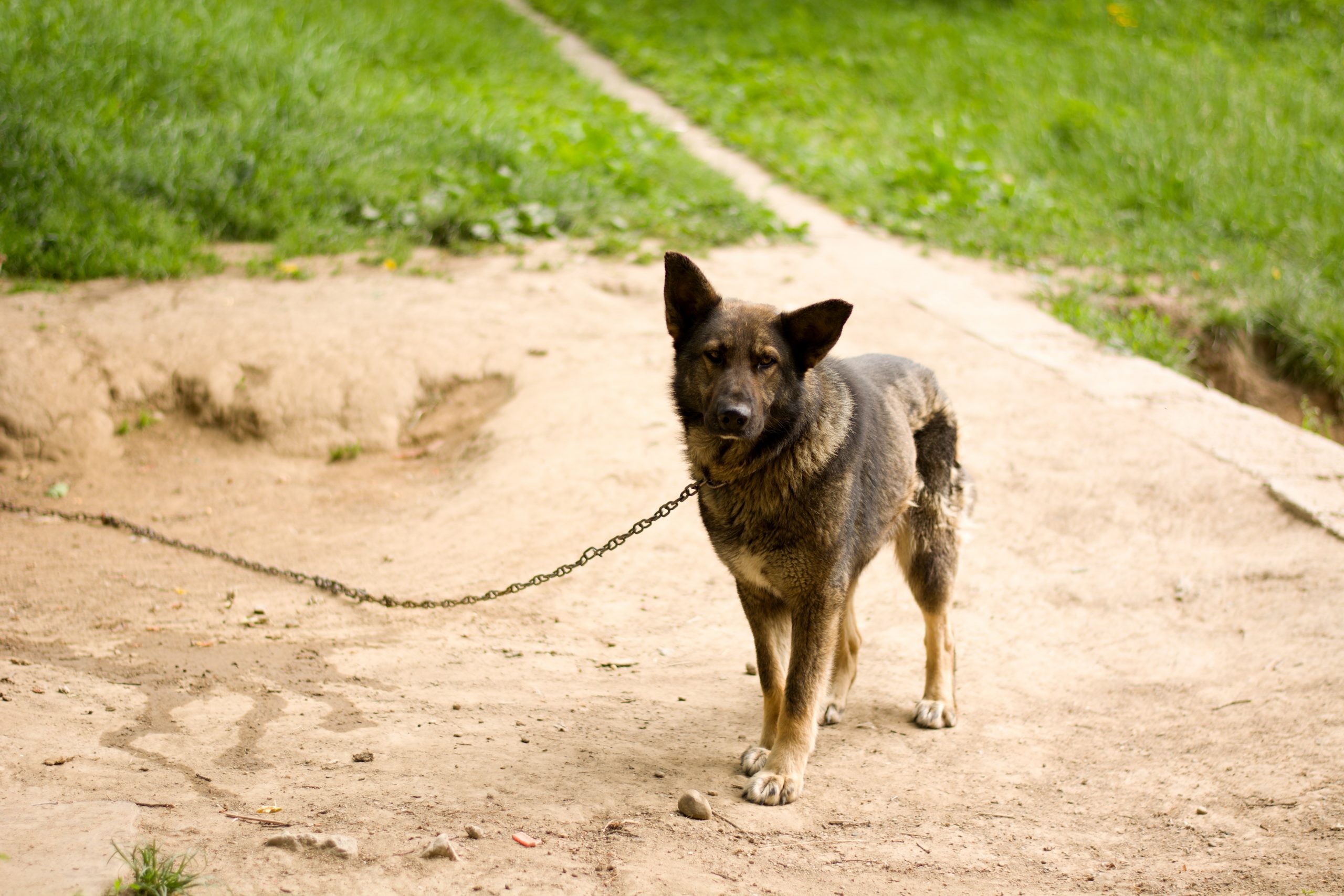 Keeping a dog on a chain or a tether outside might not always seem like a malicious act. After all, dogs enjoy getting outside, and keeping them on a leash is the only way to keep them from running away. While the intentions behind this act might be good, unfortunately, keeping them on a chain and restricting their freedom to move around can be extremely detrimental to a dog’s health, well-being, and ability to properly socialize with humans and animals. The myriad problems that chaining a dog presents may not be completely obvious to those who choose to confine their companion animals in this way, although there are some pet guardians who do know better, but have more malicious intentions towards their dogs.

Without the freedom to roam around, play, and engage in their natural behaviors, dogs kept on chains or tethers can become bored, lonely, depressed, and oftentimes aggressive. Chaining confines a dog to a small area of space on the property, and they are not free to explore and engage with other pets or with people. Many dog caretakers who keep their dogs chained up often don’t realize the emotional and psychological harm it inflicts — and they often don’t check on their dogs often enough to find out.

In fact, chaining your dog might be doing more harm than good and even fostering the beginnings of even more concerning behavior problems.

Dogs are naturally territorial animals and when they are confined to a small, confined space, this instinct is enhanced. Their small square of backyard suddenly becomes theirs to defend, so when people approach them they act out with aggressive, territorial behaviors like barking and even snapping or biting.

Dr. Michael Fox writes in his book Understanding Your Dog that approaching a chained dog will invariably result in a “show of aggression or territorial defense by barking and lunging” because dogs that are confined into a constructed territory zone tend to develop “territorial defense behavior … [that is] abnormally intense.”

According to the Humane Society of the United States, “Dogs are naturally social beings who thrive on interaction with human beings and other animals. A dog kept chained in one spot for hours, days, months or even years suffers immense psychological damage. An otherwise friendly and docile dog, when kept continuously chained, becomes neurotic, unhappy, anxious and often aggressive.”

In many chained dog rescue situations, once the dog is removed from their chain or tether they lose these aggressive tendencies, illustrating that the dog is not “naturally” aggressive, but rather out in response to their environment.

2. Chains Can Get Tangled and Caught on Other Objects

Many veterinarians agree that chains and tethers often cause neck and back injuries, and it is even possible for a dog to hang himself if the chain gets caught on something up high.

According to the U.S. Department of Agriculture, “Our experience in enforcing the Animal Welfare Act has led us to conclude that continuous confinement of dogs by a tether is inhumane. A tether significantly restricts the dog’s movement. A tether can become tangled or hooked around the dog’s shelter structure or other objects, further restricting the dog’s movement and potentially causing injury.”

3. Chained dogs are Sitting Ducks for Other Animals, Poisonous Insects, and Extreme Weather

Depending on where the dog lives, it is possible for chained and tethered dogs to be vulnerable to attacks from other aggressive animals (usually wild animals), venomous insects or reptiles, and extreme heat, cold, rain, lightning, or even hurricanes and tornadoes.

One Florida animal rescue organization, Dogs Deserve Better, even rescued a dog named Bandit who was kept chained to a tree 24 hours a day, seven days a week – even during Hurricane Charlie, a category-4 storm that left more than a dozen people dead and even more injured. He was so lucky to have survived that storm and lived to find a loving family, but many more dogs like him suffer injuries or even death because of the fact that they are continuously chained or tethered outdoors.

Would you come back if you were tied up outside all alone? Exactly. The same mental and emotional pain that a human would experience by being chained up is the same pain a dog experiences. As mentioned above, since chained dogs don’t often get the chance to socialize with people, they may not even know that they’re being called back when you try to call them to you. In many animal rescue cases, chained dogs who have run away don’t even know their own names and don’t know to come back when called.

5. Chained and Tethered Dogs Rarely Get the Care They Need

Out of sight, out of mind. That seems to be the way many dog owners who chain their dogs treat these poor animals. The Humane Society of the United States explains, “Rarely does a chained or tethered dog receive sufficient care. Tethered dogs suffer from sporadic feedings, overturned water bowls, inadequate veterinary care, and extreme temperatures. During snowstorms, these dogs often have no access to shelter. During periods of extreme heat, they may not receive adequate water or protection from the sun. What’s more, because their often neurotic behavior makes them difficult to approach, chained dogs are rarely given even minimal affection. Tethered dogs may become ‘part of the scenery’ and can be easily ignored by their owners.”

If this describes the kind of treatment that a dog you know is receiving the best thing you can do is to call your local ASPCA or Humane Society chapter or another local animal rescue shelter.

No matter what the conditions, dogs who are allowed inside and are properly socialized and trained make much better pets than dogs who are continuously kept on chains or tethers and left to fend for themselves. Remember, dogs are like kids – they need a loving home, the ability to run around and play, and a nice, cozy bed indoors. The better you treat your dog, the better they’ll treat you.