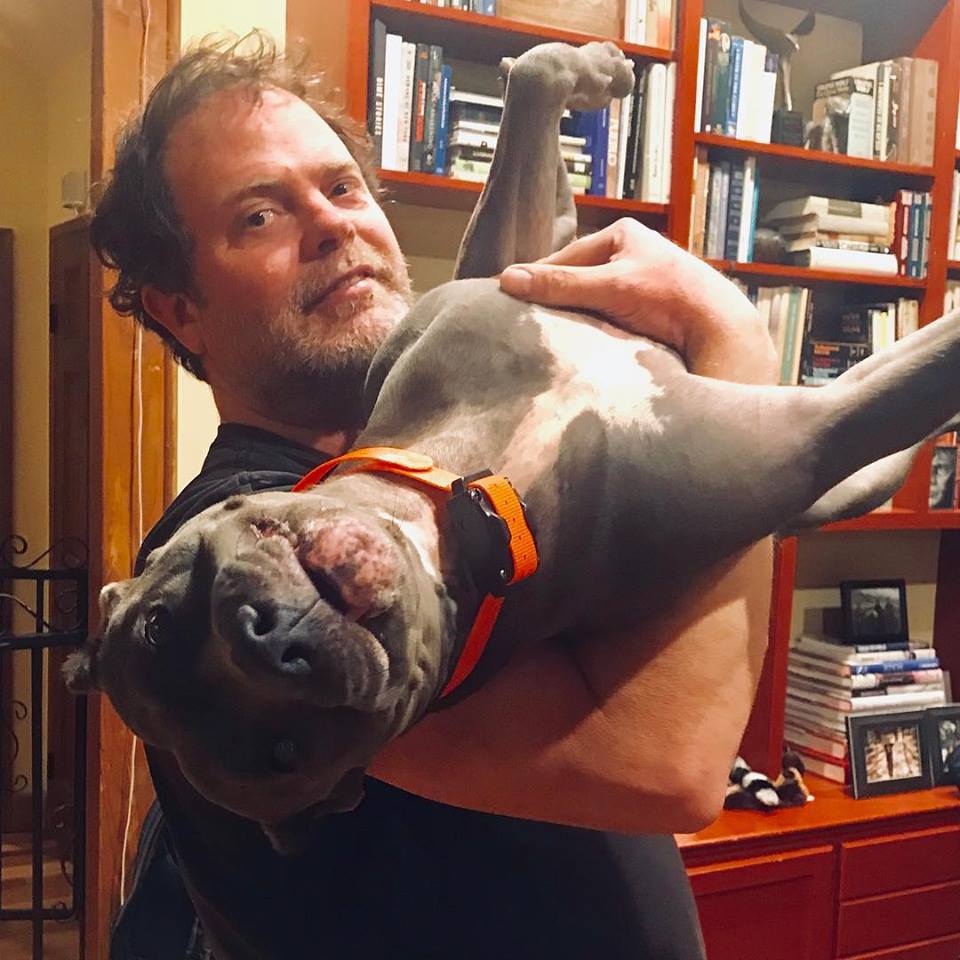 Pit bulls are a misunderstood breed who have sadly been given a bad reputation they don’t deserve. Pit bulls are just as loving and amazing as all other dogs. Thankfully, there are people who advocate for them in hopes that more people will adopt them and see them for the lovebugs they are. One such person is beloved TV star Rainn Wilson who played Dwight on the classic comedy “The Office.”

Wilson loves rescuing pit bulls as he included in the caption of a hilarious video of a pit bull he placed with a friend destroying a dog bed. Thankfully for us and those who need to be reminded that pit bulls are wonderful, Wilson often posts sweet photos and videos of his precious pitbulls!

Our rescue pitties, Oona and Pilot in the sun.

When Wilson and his wife aren’t rescuing or placing pit bulls, they are fostering them… or failing at fostering them. One of his precious dogs was a “foster fail” as he calls her. Diamond just belonged in his family. She lived a tough life and now she lives a happy home and has an actor as her human dad. What a lucky pup!

Meet Diamond. She’s what we call a “foster fail”. Me & @HolidayReinhorn were going to temporarily host her until we found a home for her but we fell in love… She was a “bait dog” – ears cut off & used to rile up the fight dogs. Covered in scars and skinny as a whippet, she now joins our other rescues Pilot and Oona & keeps them on their toes.

Although Wilson clearly loves pit bulls, having even tweeted the book I’m a Good Dog: Pit Bulls, America’s Most Beautiful (and Misunderstood) Pet as a recommendation, he holds a special place in his heart for all dogs. While in Haiti once, Wilson rescued Ti Bagay (aka Little Thing), a sweet little dog who had his ears cut off, a string around his neck, and left to die as part of a voodoo ceremony. Thankfully, Ti Bagay crossed paths with an animal lover like Wilson.

As a famous actor from one of the most well known and adored comedies, Wilson has a big platform to help others see that pit bulls are sweet babies who deserve love and care just like every other dog. He rescues pit bulls the same way he does other dogs like Ti Bagay, which helps dispel the stereotype that pit bulls are scary or unworthy of love.

To see more pit bull cuteness, check out Incredible Photo Captures the Moment a Rescued Pit Bull Finally Realized She Was Safe, Rescued Dog Patiently and Lovingly Waits for Her Human, and Rescued Pit Bull Does Cartwheels With Human Sister.