As soot, smoke, and embers filled the air of Paradise, California, humans and animals alike fled for there lives. Disasters, especially fires, are particularly frightening experience for animals, who are often abandon and left to fend for themselves against terrible and unexpected danger.

Recently, a pair a firefighters rescued a pair of donkeys fleeing the blaze, and stories of humans helping lost animals during the wildfire prove that even the worst of events can bring out the best in good people.

That same spirit of giving was on display again, when a brave police officer took a lost horse out to graze… In the wildfire’s smoke! As you can see from the pictures, the office is wearing a smoke mask to protect himself from the air quality. 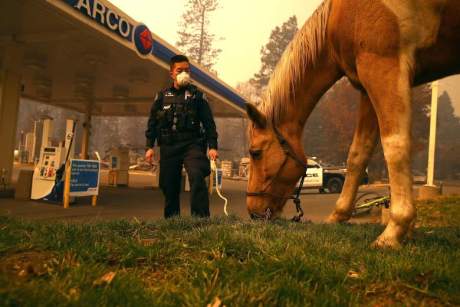 Not much is know right now about the horse, other than he was found wandering alone in the soot. Hopefully this horse can get a happy ending, but for now at least, this beautiful creatures seems to be in caring hands. 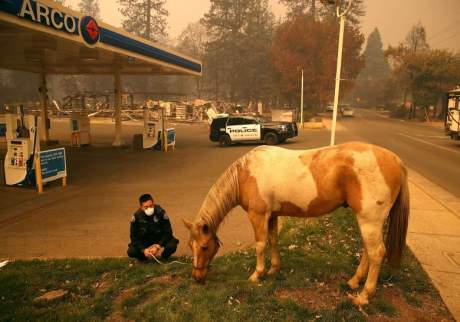