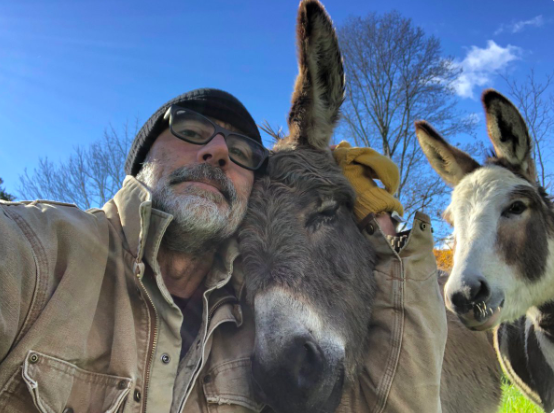 Although he plays a ruthless villain on television, actor Jeffrey Dean Morgan proved yesterday that he truly has a heart of gold. The actor, best known for his role as Negan on AMC’s “The Walking Dead,” adopted an inseparable animal couple from Carolina Waterfowl Rescue. Jack the donkey and Diane the Emu have been together since they were brought to the rescue service after being abandoned by their owner. From the moment they arrived at the shelter, it became clear their bond with one another was a special one.

According to the rescue, when the pair were separated they became stressed and panicked.  The two only calmed once they were reunited, and spend all of their time together cuddling and sleeping.  The service was concerned that it would be hard for anyone to adopt Jack and Diane, as caring for both a donkey and an emu, let alone a pair as special as this one, could prove to be a tall order. The rescue decided the two would not be spilt up, as Jack and Diane had difficulty relating even to other donkeys and emus. That’s when Morgan stepped in. After discovering the interspecies duo, Morgan decided Jack and Diane would find a home with him. On Tuesday, Jack and Diane boarded a trailer together and went to to their new living arrangement with Morgan in New York. Since the adoption, Morgan has been lightning up Twitter with updates.

Clearly, Morgan has a soft spot for the two lovebirds (technically, one bird, one donkey) and after learning more about Jack and Diane, it’s hard not to feel the same way. Animal friendships are as frequent as they are heartwarming, and anyone who steps in to give a pair of animal friends a chance .  After a rough beginning, it looks like, these two are in for a Happily Ever After! Lead Image: Twitter/@JDMorgan