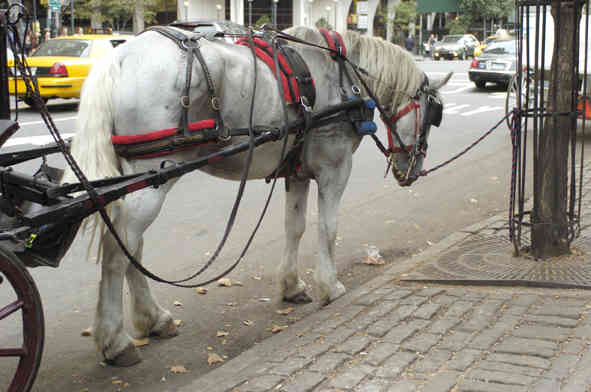 Charlie Horse died on Sunday, October 23rd on the mean streets of New York. He was a NYC carriage horse on his way to work in the park. He lay there on the street, unidentified at the time – his mouth open, hooves tied together and mane flared. "> New York City Fails its Carriage Horses - One Green Planet
Food Monster App Tiny Rescue Shop Newsletter Support Us Cookbooks Petitions

Charlie Horse died on Sunday, October 23rd on the mean streets of New York. He was a NYC carriage horse on his way to work in the park. He lay there on the street, unidentified at the time – his mouth open, hooves tied together and mane flared. The beautiful 15-year old white Percheron looked so big and powerful and helpless at the same time – like the image of Pegasus struck down – so final and so alone. It was a shock.

At the time I said “Healthy horses do not just die in the street” and that “this horse must have died in the throes of agonizing pain because of the many hoof scuff marks on the street near his body.” I did not know how right I unfortunately would be.

On Monday, October 31st, the ASPCA released a statement about the necropsy report, “Charlie was not a healthy horse and was likely suffering from pain due to a pronounced ulceration of the stomach and a fractured tooth. [He] was not healthy for a career in an urban carriage horse business.”

Last week, in response to the death of the horse, Mayor Bloomberg added fuel to the fire by defending the industry. He dismissed calls for a ban saying that he could not imagine why “Anybody wants to destroy something that is part of New York’s heritage and that tourists love.“ He continued “They’re [carriage horses] well taken care of and most of them wouldn’t be alive if they didn’t have a job.” About Charlie, he said there was “no evidence “it” had been abused.” In response to the news of Charlie’s illnesses, the mayor said “This is a horse that went to work at age 15. Without that, unfortunately, the horse probably would have been put down, and so at least “it” had a good life.”

Some people insist on living in an altered reality, wearing blinders.

And who are all those people who love this industry to whom Mayor Bloomberg refers? Every poll I have seen in the last five years has shown at least 75% of respondents in favor of a ban of this trade. The most recent was from the Wall Street Journal and asked “Should NYC ban horse-drawn carriages?” The latest results I checked showed a tally of 76.8% Yes and 23.2% No.

The industry refuses to accept any responsibility for carriage horse deaths, accidents, living and working conditions, or violating rules and regulations. They like to say that they love their horses and Charlie was healthy – that we are just a bunch of humaniacs, loons and bleeding hearts – that we are uninformed, liars and know nothing about horses. How wrong they are.

This was an illness whose symptoms had to be noticed by anyone who cared for that horse. Why were his cries for help unheeded? I asked Dr. Holly Cheever, world renowned equine veterinarian and expert on the carriage industry, her opinion about this tragedy. She said – “As a member of a prey species, Charlie would have concealed his pain–but a knowledgeable horse handler would have noted both lesions and would have had dental surgery to extract the tooth as well as medication and diet changes to minimize the ulcer’s pain. Such expenses are rarely acceptable to this industry.”

Susan Wagner, president of Equine Advocates, a sanctuary in upstate New York and home to 80 equines, added “I believe that Charlie’s stomach ulcer combined with the added pain of a bad tooth, with all of that metal in his mouth putting pressure on it, could have really exacerbated his stomach problem. His death probably could have been prevented and Charlie would still be alive today had he been given the medical attention he so badly needed but he never received.”

Just three hours after our vigil for Charlie Horse, another horse spooked and bolted into traffic on Central Park South. Philip Powell, a tourist from North Carolina, told the Coalition to Ban Horse-Drawn Carriages that he and his wife were walking by the carriage horse hack line on Central Park South – not far from Columbus Circle – when one of the horses spooked and charged into traffic – running west before he made a u-turn on the congested street – dragging an empty carriage behind him. The horse ran east on Central Park South and turned into the park at 7th Avenue where he crashed. This happened around 11 pm on Friday night, October 28th.

Powell was fairly close to the horse when he noticed him jerk his head upright and then bolt into traffic. He said it was quiet at the time. Powell told New York State Senator Tony Avella and us that “It’s an absolute miracle that the horse and no pedestrians were seriously hurt. The entire incident happened so fast and was extremely shocking. The horse took off at top speed and could not be stopped. He could have easily trampled a pedestrian.”

When Powell and his wife finally caught up with the horse, he witnessed an overturned, damaged carriage at the intersection of West and Center Drive, just off Seventh Avenue. “When we arrived, the horse was standing, but trapped in the gear. Several men tried to free him. They eventually left after a man led the horse away and some other men were cleaning up the broken carriage. “ The police arrived, joining what appeared to be a dark unmarked car with officials asking the crowds to get back.

This accident is consistent with the nature of a horse. They are unpredictable, nervous prey animals and can spook at the slightest provocation. It does not have to be a loud noise, but could be a shadow, odd shape, rustling leaves, even an odor. They run from what they perceive to be a danger and become an unwitting, powerful weapon. It is fortunate that the horse did not get killed or kill anyone in his panicked flight.

We checked with the two local police precincts and they oddly did not have any record of the incident even though the police were reported to be at the accident site. The ASPCA did, however, confirm this accident with Senator Tony Avella’s office.

I have long suspected that there are many more accidents like this that get covered up because I hear about them from tourists and New Yorkers but they never make the press and information is not available through the government agencies – even when we have documenting photos.

We do not know how much longer this abominable, archaic and politically connected industry will continue getting away with what they do.

But we are going to stay in this fight until the industry is shut down and the horses saved. We support Senator Avella’s and Assemblymember Linda Rosenthal’s bill in Albany, which would prohibit the use of horse-drawn carriages in New York City. Bills #S5013 (Senate) and #A7748 (Assembly). Show your Support for the new bill by signing this petition.

We believe the bill will have a better chance in Albany, away from the unreasonable, political favoritism of New York City.