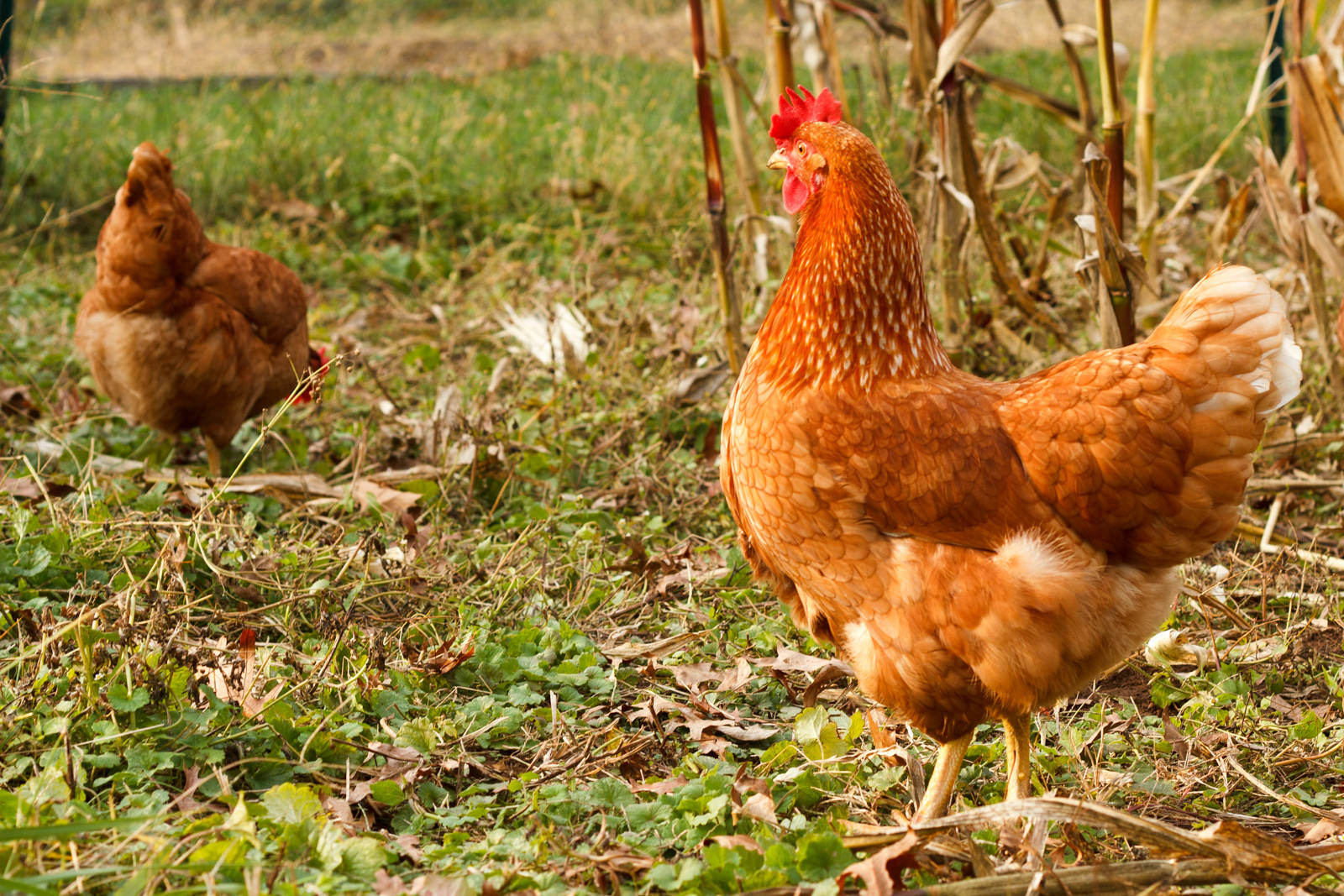 Around 1969, I’d picked up a copy of Ruth Harrison’s 1964 “Animal Machines,” the first comprehensive exposure of the sufferings of factory farmed “food animals.” Shocked, I passed the book to my mother, Violet Spalding, and together we decided to take action and the animal activism group Chickens’ Lib was formed in London, England, in the early 1970s.

Straightaway, we decided to limit our mission to fighting the cruel battery cage system – maybe, we reasoned, we would make more progress if we limited our aims, and at least there was a chance of obtaining live proof of suffering: outside butchers’ shops in the East End of London, piled up crates crammed full of pitiful “spent” hens could often be seen, awaiting ritual slaughter.

For a while, we “went it alone,” with letter writing campaigns, mainly aimed at Ministry of Agriculture staff. Quite quickly though, depressed by the total lack of interest from officialdom, we progressed to staging media-grabbing demonstrations, often involving a mock battery cage containing four ex-battery hens.

Following press reports of our eye-catching activities, a sprinkling of like-minded people got in touch, and our list of supporters just grew and grew. Then, in 1975, a television program about Chickens’ Lib attracted many more. By the 1980s, Chickens’ Lib, always run on a voluntary basis, had become a force to be reckoned with by the government and poultry industry alike. Eventually, we campaigned for virtually all poultry (from the tiny quail to the ostrich) and for other non-feathered farmed animals too.

My mother died in 1999, and after 40+ years of work, I finally wound up Chickens’ Lib, in 2010. (Here I must make special mention of invaluable and sustained help from Irene Williams and Penny Perkins.) By then, I’d already decided to record some of our experiences, and had started writing a book. “Chickens’ Lib” was published in 2013, by Bluemoose Books. As well as describing memorable events, I argue my conviction that factory farming is, assuming existing laws, inherently illegal. And I’ve ended with a plea for a planet that will thrive without the presence of a single “food animal.”

“Chickens’ Lib” is written in an informal style, includes plenty of (black) humor and is packed full of hard facts. My sincere hope is that the book will, in however small a way, help bring about change.

Along the way with Chickens’ Lib, we learned a lot about campaigning. Here are ten basic tips for anyone starting off along this stony path:

1. Disassociate Yourself From Any That Encourage Violence

Over the years, we had visits from the police, but, because of our strict policy of non-violence, could not be linked to criminal behavior. (Our definition of criminality did not include the rescuing of animals from the horrors of factory farms, by peaceful means.)

We soon discovered that conditions on intensive farms are generally much worse than feared. Take this shocking example: when researching the broiler chicken industry, we learned of the extreme feed deprivation suffered by the breeding stock. The obese baby birds slaughtered at around six weeks of age are the progeny of birds kept desperately hungry, to ensure they live long enough to breed. (If fed ad lib, the adult birds would soon succumb to those same life-threatening diseases of obesity suffered by the young birds.) Describing the unvarnished truth is all that’s needed; strict accuracy puts campaigners in a position of strength.

3. Rely on First-Hand Knowledge Whenever Possible

Where appropriate (e.g. if you’ve obtained evidence, living or dead, of animal abuse) obtain a veterinary report, to back up your findings. On one occasion, we bought four hens direct from their cage and found one to be badly crippled. The vet’s certificate showed arthritic changes in a hock joint, following a fracture. In the near darkness of a bottom cage, this little hen must have suffered terrible pain, long-term.

Over the years, I saw into countless battery units, building up a picture of dreadful deprivation. These encounters with imprisoned hens, some of whom we were able to rehabilitate, encouraged me to write my children’s book, “Minny’s Dream.” This fast-moving adventure story tells how 12-year-old Paula moves to the country, only to find herself living next to a battery farm. In the shed, she befriends Minny, a little hen on the top row of cages. To Paula’s astonishment, Minny speaks to her, telling her all about the misery she endures, and how she dreams of a life where she can feel the sunshine, and act out her ancestral memories.

“Minny’s Dream” has recently been re-issued, with minor changes to include the ironically named “enriched cage” (in reality, no more than factory farming’s cynical attempt to placate the welfare lobby). The book is now available online, both as a paperback and an ebook here.

Another veterinary report we obtained, following a post mortem on a four-month-old broiler we’d bought, listed the diseased state of many of his vital organs, highlighting the appalling health status of the modern meat-type chicken. Keep any such reports — forever! They can certainly come in handy!

4.  Select Your Targets Carefully and Stick to Them for as Long as Necessary

Few battles are easily won. Sometimes victory might seem impossible, but always bear in mind that the drip on the stone eventually wears down rocks – every revelation about the horrors of factory farming adds to the dossier of cruelty. Chickens’ Lib cannot chalk up many outright successes, but we know that our work has influenced the government and the industry, and helped fellow organizations. Facts that we revealed about hitherto neglected areas were soon picked up on by fellow campaigners, and proved invaluable in raising public awareness of farmed animal suffering. Examples of these areas are the broiler chicken and turkey industries and the truly shameful pre-shoot treatment of game birds.

One major success, the result of campaigning by organizations throughout Europe, has been the ban on the “barren” battery cage, and Chickens’ Lib certainly played its part there. Since 2010, thousands of squalid, filthy battery units within the EU have been forced to close down. Sadly, any joy has been marred by significant investment in enriched, or colony, cages, especially by the bigger producers.

5. Aim High, but Locally Too

Small battles won are important, as well as the major ones. For example: when ­­­my mother and I checked on the source of a shopkeeper’s “free range” eggs, we recognized the address he gave us – that of a shambolic nearby battery. We informed the authorities and a prosecution, accompanied by good publicity, followed.

There’s nothing better than knowing your facts, and preferably more of them than “the enemy.”

On one occasion, we tracked down a mistake in an official booklet about forced moulting – advice was given to farmers to turn off the lights for 24 hours, which we knew to be illegal. Once informed of this, the authorities were forced to admit their mistake and issue a corrected version. We in Chickens’ Lib were seen to know our facts!

On a much broader canvas, we eventually abandoned our original plan to concentrate on the battery hen alone and began to carry out in-depth research into the broiler and turkey industries, becoming, as far as we knew, the first organization to do this, but soon to be followed by others, worldwide. (The discovery in the 1980s of a live, maggot-infested broiler chicken by the roadside, fallen from a transport wagon, kick-started our opposition to this massive industry.)

7. However Tempting, Avoid Insulting the Opposition

In the end, well-chosen hard facts and good relations with the media will be your most effective weapons. In the heat of a demo, it’s hard to keep calm, but remember that the public is more likely to remain sympathetic to your cause if campaigners are seen in a good light. Humor can be a good “weapon” – Chickens’ Lib’s supporters did a lot of dressing up and singing songs (the words especially tailored for the occasion!) and we never failed to get noticed.

8. Read Up on Any Animal Protection Laws That May Apply to Your Territory

Then put relentless pressure on politicians and the law makers, either to enact existing laws, or to introduce them. The more familiar campaigners are with every detail of animal protection laws, the stronger your case will be. Sustained opposition by organizations throughout the EU to appalling cruelty within the pig, calf, and poultry industries have forced the introduction of higher standards, however minimal.

“Burn out” is a condition all too common in those who dare to stand up to the suffering endured by billions of animals worldwide. Accept that a break from the grim scene now and then is essential.

10. For the Sake of the Animals, Human Health, and the Planet, Adopt a Plant-Based Diet

Again, be sure of your facts – not forgetting the nutritional and environmental ones — so you can encourage others to do the same.