Rhinos Are Ten Years From Extinction. How One TV Actor is Working to Save This Precious Species 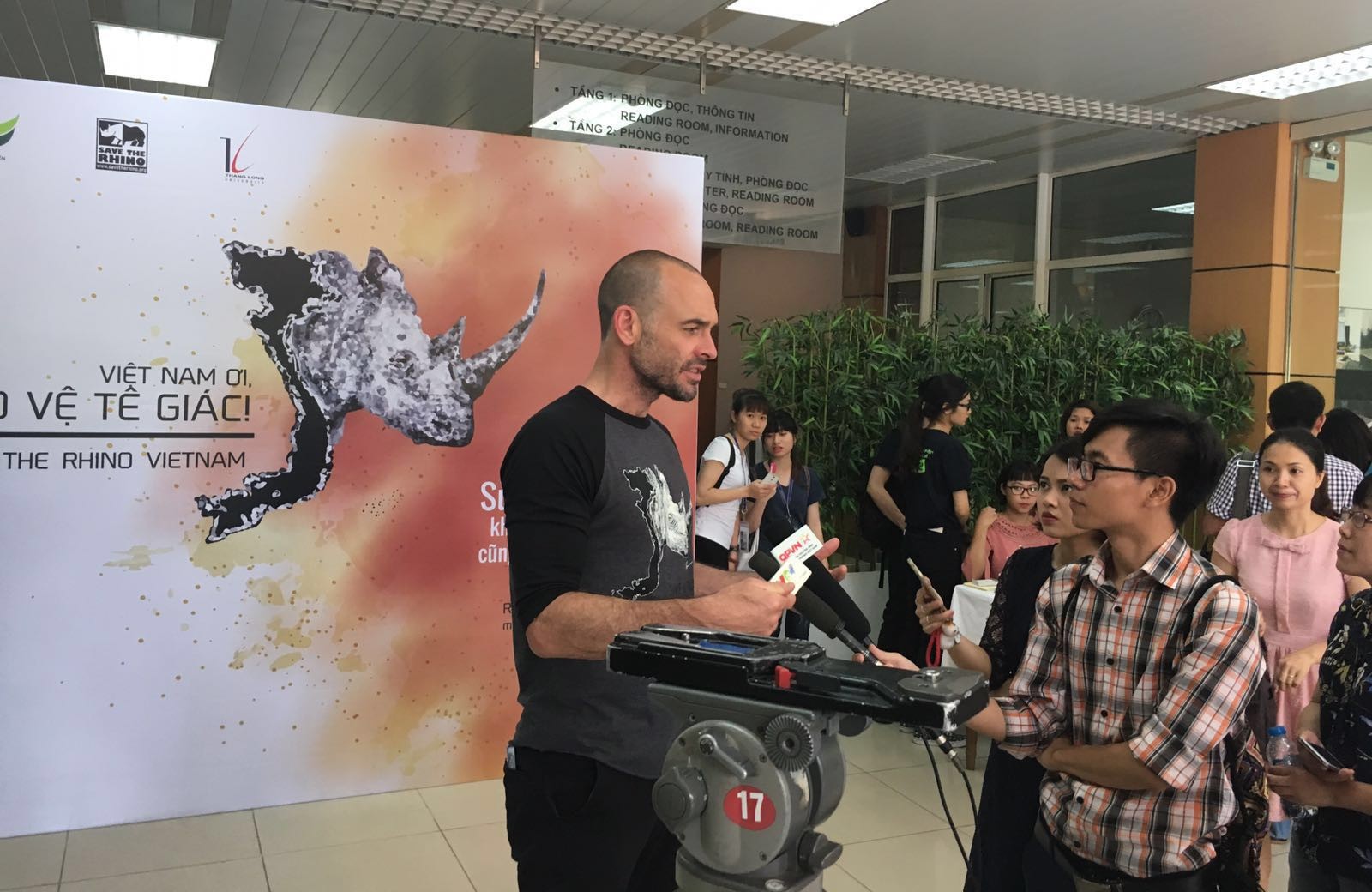 One rhino is killed every eight hours. At least two rhino subspecies have been wiped out; a third is on the brink. The entire rhinoceros genus is racing extinction and the harsh truth of it is, they are struggling to outrun the rate at which they are being poached for their horn. As bleak as this is, we haven’t failed rhinos yet. Paul Blackthorne, star of TV’s Arrow, has joined forces with London-based charity Save the Rhino International to give them a fighting chance.

“Rhinos have walked this earth for over 50 million years, but could be just ten years from extinction unless we can turn the tide on poaching,” Blackthorne relayed the frightening figure in an interview with One Green Planet. “What many people don’t realize is that this is a new poaching crisis – In the last ten years, demand for rhino horn has rocketed and around 90 percent of rhino horn poached in Africa ends up in Vietnam [and China].”

Since 2008, rhino poaching has dramatically escalated and current poaching levels are at crisis point. This year it is expected that more rhinos will die as a result of poaching than are born, which will lead to further population crashes. Rhinos are critically endangered and can’t afford any more decline – there are only five species and around 29,000 individuals left in the wild. Javan rhinos have the saddest story of them all, comprised of a meager 66 individuals or possibly even fewer.

Not only is poaching the primary conservation threat to rhino survival, but it also presents a grave welfare concern for targeted individuals. Susie Offord, Deputy Director for Save the Rhino, describes the process by which a rhino’s horn is removed as brutal, “The rhino is hunted down, and may be still alive while the poachers hack off the horn and much of the rhino’s face with an ax or a panga (machete). Usually the rhino dies of the gunshot wounds, but for the animals that survive these horrific injuries, the impact of poaching is just as tragic, as they face months of painful surgery to try to close the wounds.” Even tiny rhino calves are killed for their stumps of horn, or if they manage to hide from the poachers, are then vulnerable to lions or simply starve to death. 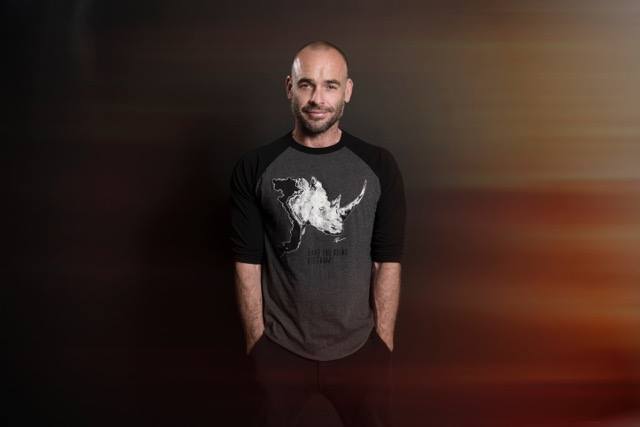 Learning about the conservation and welfare issues that both rhinos and elephants are experiencing at the hands of poachers is what compelled Blackthorne to help the iconic herbivores. “I saw an incredible film called Last Days of Ivory by Kathryn Bigelow, about the elephant poaching crisis,” he explained, referring to an animated film that highlights the connection between ivory poaching and terrorism. The film draws attention to the horrific fact that one elephant is killed for its tusks every 15 minutes and to the very real issue that wildlife trafficking is one of the biggest illicit industries in the world. Blackthorne, who watched the film a year and a half ago, expressed that it really affected him, “The facts about poaching were shocking – I just couldn’t believe it.”

During this campaign, Blackthorne first read the statistic about how central Vietnam is to the rhino poaching trade. “It made me realize that if we were going to fix this, we had to understand why Vietnam was such a huge market and tackle the problem at its source,” Blackthorne said. “I did more research and found out that Save the Rhino International back home in the UK is working in Vietnam to raise awareness of the devastating impact of the illegal rhino horn trade.”

The charity began working in Vietnam in 2012 after the country was identified in a Nexus Report by TRAFFIC as the key consumer of rhino horn. In 2013, recommendations were given to Vietnam by the Convention on International Trade in Endangered Species (CITES) Conference of the Parties to address the demand. Vietnam is signed up to CITES, as well as the London declaration on the illegal wildlife trade and it will be hosting the next Illegal Wildlife Trade conference in November.

Save the Rhino now works directly with law enforcement agencies and also with government bodies on policy issues, ensuring that any changes to Vietnamese law are made with consideration for wildlife, including rhinos. It also partners with Education for Nature Vietnam and supports TRAFFIC’s work to implement demand reduction campaigns directed at the general public, politicians, businessmen and traditional medicine doctors. The latter groups in particular have been identified as a significant part of the supply and demand chain, driving the demand.

The driving force behind the illegal trade of rhino horn in Vietnam appears to be twofold – rhino horn is used in traditional medicine and it is seen as a symbol of status.

Blackthorne noted that the idea that rhino horn is a fashionable product is misguided, “Customers in Vietnam are paying huge sums to own something made out of the same thing as your own fingernails – they’re being duped! The money goes into the hands of criminal gangs who poach and traffic horn, and are involved in a lot of other nasty stuff. Raising awareness in Vietnam helps protect rhinos and it stops people from being exploited, too.”

Save the Rhino Vietnam

Recently, Save the Rhino launched a new campaign called Save the Rhino Vietnam, which is specifically aimed at educating people about the true nature of the trade and the resulting global threat to rhinos. When Blackthorne heard about the project, he jumped at the chance to get involved. As part of his work to help bring international attention to the issue, he started a Save the Rhino Vietnam t-shirt campaign with fellow campaign ambassador and Arsenal F.C. footballer Aaron Ramsey. The campaign gained support from celebrities and the general public worldwide.

In May of this year, Blackthorne also spent two weeks in Vietnam with Offord, launching the Save the Rhino campaign. The goal was to put the rhino horn issue firmly on the country’s national agenda. During their stay, Blackthorne and another Save the Rhino supporter, Jake Dudman, went on an undercover mission to a Vietnamese village known for prolifically selling illicit rhino horn. Fitted with hidden cameras, Blackthorne and Dudman found that despite the illegality of the rhino horn and elephant ivory that the traders were selling, they were able to openly talk about the products. The only conversation they were told was off limits was about who the rhino horn “provider” was. They also couldn’t view the rhino horn in person; instead, they were shown a picture of the horn, which was selling for a whopping $40,000.

International focus on Vietnam has already been a significant factor in the change that has taken place so far in the country. “Asking the Vietnamese government to stand up and say how they are tackling the problem has resulted in some quite substantial changes already, given the fact that they have now added rhino species that aren’t even native to Vietnam into their penal codes,” Offord told One Green Planet. “The penal codes will only come into effect in July 2016 so we will have to see if the changes will be effective. It will then be interesting to see if we get any important prosecutions. Up until now, we have seen almost no prosecutions for rhino horn crimes.”

Looking forward, Offord believes the government still “needs to be setting an example to show everyone that they do not condone the use of rhino horn, including publicly saying they will not use it. The government also needs to ensure that along the whole enforcement chain, officers are trained on how to handle wildlife crime effectively and to set a zero tolerance on this. We need to see more prosecutions and people serving jail time, not receiving fines.”

Blackthorne is encouraging public involvement as well, “It’s a small minority of people in Vietnam that can afford to buy rhino horn, but they have a huge effect on the survival of this amazing species. There are so many Vietnamese people backing the campaign who want this trade to stop – we need to support them, and make sure that future generations can still see rhinos in the wild.” This video from the British International School Hanoi in Vietnam is just one example that shows how passionate children in Vietnam are about saving rhinos!

In other countries, including Japan and Taiwan, the demand for rhino horn has been successfully stopped and Blackthorne is adamant that “rhino horn can, and will be, an unfashionable fad from the past” in Vietnam too. “This is a new trend. It’s something that we can change before it’s too late.”

But Blackthorne warns that we cannot be complacent, “If we stand by, and rhinos are poached to extinction, then we’ve lost them for good. That means communities who live with rhinos will have lost an invaluable part of their ecosystem, and all the economic benefits ecotourism brings. I’m not having that – and neither should you.”

Like Paul Blackthorne, you too can support Save the Rhino’s efforts in protecting the world’s last remaining rhinos: sign up for the charity newsletter, get involved with the Nail it for Rhinos public campaign, fundraise using the Rhino Legends pack and spread the word about the issue that rhinos face. Please also consider sending a donation directly to the help Save the Rhino Vietnam campaign.