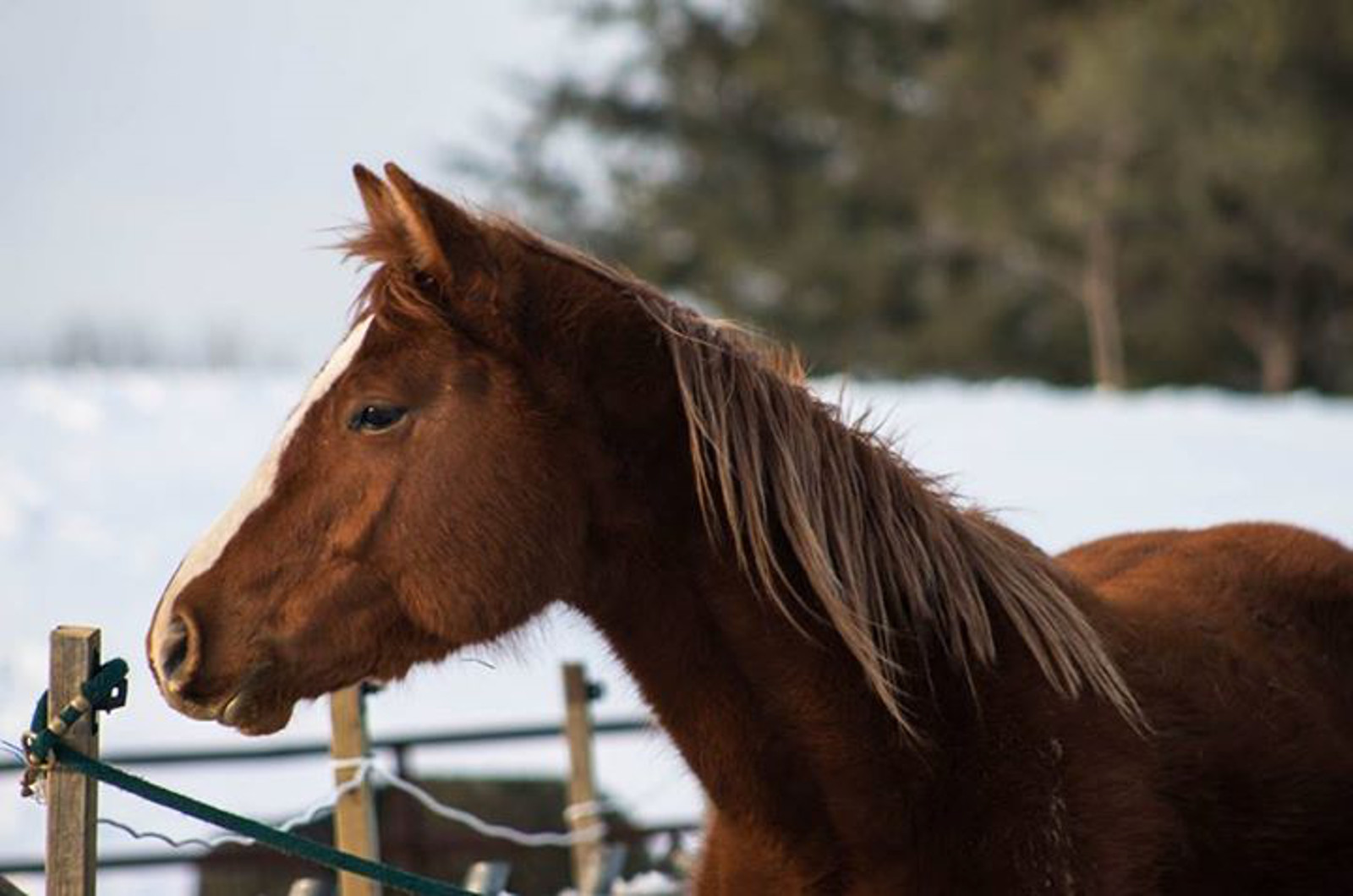 A pregnant horse stands confined to a small stall, packed into a crowded facility with numerous others just like her. She has endured many pregnancies in her life, never having the chance to bond with her offspring and exists to serve one purpose – to make a profit.  This is the life of a horse on a “PMU” (Pregnant Mare’s Urine) farm, a facility that exists to produce a drug known as Premarin which is used for Hormone Replacement Therapy (HRT) in menopausal women.

Life for PMU mares is brutal and entails a constant cycle of impregnation to keep their estrogen levels high. They will spend nearly six months of their 11-month pregnancies confined to stalls, unable to lie down or turn around, and once they give birth, their babies are escorted away. This process is repeated over and over for the duration of the horses life. Those that survive this extremely stressful and taxing life may be sent to auction when they are no longer “useful” which more often than not means a swift trip to a slaughterhouse.

While this is the tragic reality for mares, what happens to the by-product of this industry – the thousands of PMU foals born out of cruelty? The reality is just as heartbreaking for these young animals, especially considering that there are many synthetic alternatives that make this entire cruel cycle obsolete.

A Look into the PMU Industry

Although there are now a number of synthetic options available on the market, Pfizer (a giant in the drug industry) still produces the original version as well as a combination drug known as DUAVEE – both using the urine from pregnant mares.  In the last few years, the industry has decreased from nearly 35,000 horses to approximately 800 in North America.  In its prime, PMU farms across the United States and Canada produced nearly 40,000 foals per year.  Sadly, the industry has now expanded overseas to countries such as China where animal protection laws are lacking. There are reportedly 90,000 mares currently in PMU farms in China alone. Until Pfizer no longer produces Premarin and DUAVEE, the horses caught up in the industry continue to suffer.

What Happens to Foals?

Horses used in the PMU industry are selectively chosen and are often of pure bloodlines – that is, the industry uses the farms as a kind of breeding establishment to produce highly profitable foals, in addition to supplying urine to drug companies.  Foals born into this world are often of high breeding and registered. Why not make a profit off of a by-product?

This is yet another example of how animals are exploited, used and discarded for our own selfish purposes.  Although some of the foals will be fortunate enough to be adopted into respectable homes, others are not so lucky.  A large of majority make their way to auction houses, along with worn-out mares, and ultimately end up in crowded pens, owned my kill buyers. In 2002, nearly 15,000 foals were sold directly to the slaughter industry.  This is the story of a PMU foal born in Manitoba, Canada that found a happy ending. 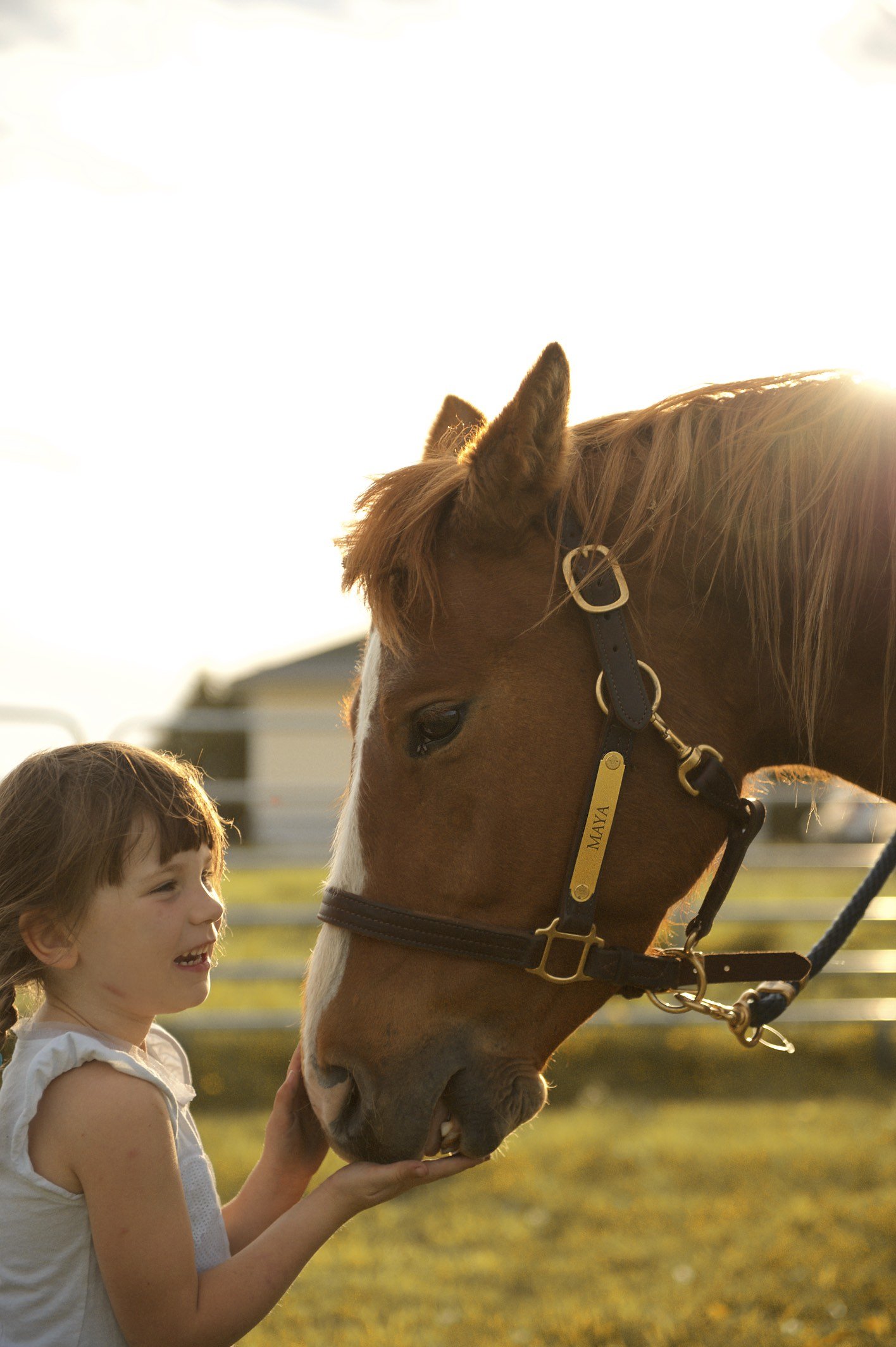 A horse named Stylish Securitee was one of 20 foals born on a PMU farm in Canada – a registered Foundation Quarter Horse (QH) on both her sire and dam sides.  Her bloodlines pure dating back to the first generation of Quarter Horses and a famous breeding QH known as Traveler.  Her lines also include many famous sires and dams: San Simeon, Impressive1969, Three Bars, Diamond Ray and Two Eyed Jack.  Registered and micro chipped with NAERIC, North American Equine Ranching Information Council, one would think she had every chance of success.  This was not the case.

Along with the other QH foals born on the PMU farm in Manitoba, this young horse found herself being shuffled around – lost in the cruel industry that often results in a journey to the slaughter house.  She eventually made her way to Ontario, Canada and into the kill pens of a local feedlot, waiting to load on the slaughter-bound trailer.  Thankfully, due to a number of kind and compassionate individuals, Maya (as she is now called) and the others were spared.  They were just yearlings when they were rescued.  She soon came to live at the sanctuary when she was only a few years old – a whole life ahead of her.  For a horse with such pure bloodlines and impeccable breeding, it seems impossible that she would be destined for meat.  Sadly, this is one of the most common fates for the by-products of Premarin production.

Maya is one of many horses who have suffered for the sake of human industry, however, with the advent of synthetic alternatives for Premarin there is a very real possibility that this  drug will be produced entirely independent of horses. This doesn’t mean that we can give up fighting for the protection of horses just yet. First and foremost, we must continue to raise awareness for this issue by sharing this post and working to educate others. You can also help by supporting local rescues that are involved in saving PMU horses and foals.

Until the industry ceases operation, life for the horses involved is a miserable one.

“Change happens by listening and then starting a dialogue with the people who are doing something you don’t believe is right.” – Jane Goodall