Meet Gloria: the Resilient Goat Who Survived Life Chained in a Stall at a Racetrack 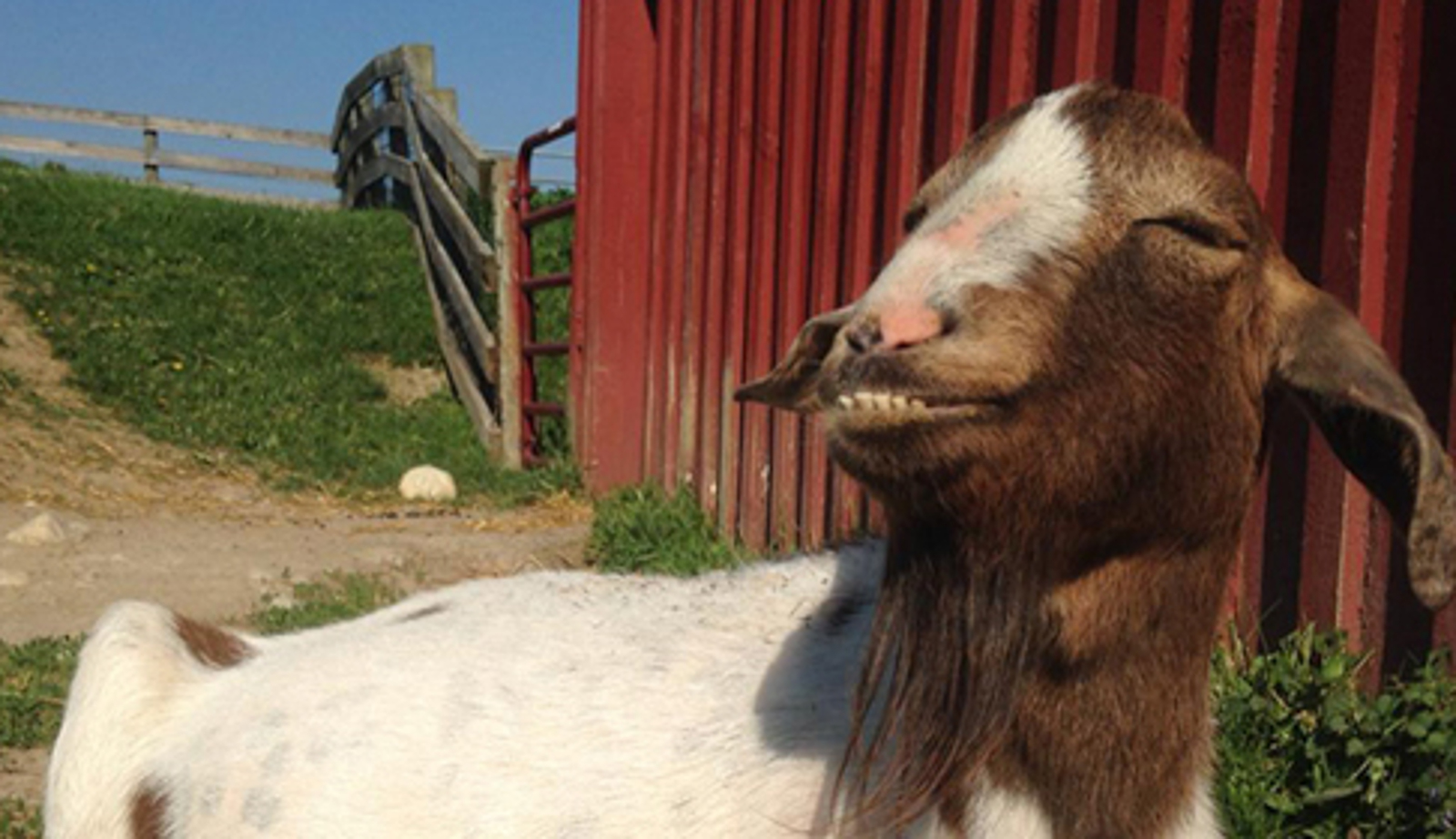 Gloria was a goat who thought she was a human. She was as joyful as a kid and as cantankerous as an old fogie. She played gleefully with friends but always kept them in their place. She possessed eccentric insecurities and uncommon strength of spirit. It’s been almost a year since Gloria passed away, but we’re still celebrating her life at the shelter. 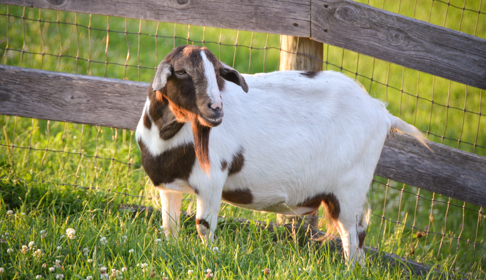 Trouble at the Racetrack

For the first eight years of her life, Gloria was kept tied up at a horseracing track outside Chicago. Such facilities sometimes keep goats in the belief that their presence calms high-strung racehorses. The goats are seen merely as tools to enhance the performance of their equine companions, and their own needs are often egregiously neglected.

Eventually, Gloria came to the attention of animal advocate Carrie Gobernatz. Carrie had been working to aid the many feral and stray cats, as well as dogs, chickens, geese, and other abandoned animals, struggling to survive on the racetrack’s backside. One day, Carrie came across Gloria in one of the barns. Gloria was tied up on a rope so short she couldn’t lie down, and she had no food or water. Her udders were huge and had sores on them. She clearly needed immediate veterinary attention. 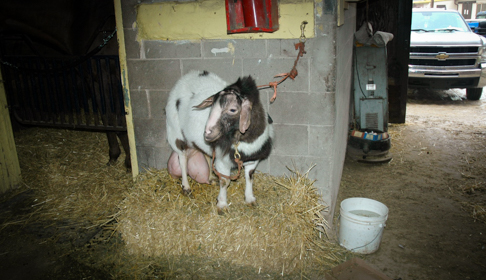 “I was very angry,” recalls Carrie. “To think that vets walked right by her every day to care for the many horses in this barn owned by a very wealthy racehorse owner made me sick.” Carrie immediately lengthened Gloria’s tether, set down straw bedding for her, and brought her fresh food and water. The next day, she confronted Gloria’s “owner” about his neglect. He refused to relinquish Gloria, but Carrie persisted, finding a vet and getting an estimate on treatment for the udders. When the quote of $500 for veterinary care came back, the “owner” changed his tune and agreed to hand Gloria over to Carrie.

Carrie contacted Farm Sanctuary, and we immediately sent a rescue team from our New York Shelter in Watkins Glen. “I was so happy for Gloria, and right before she got on the van to leave, I took that last photo of her with me,” says Carrie, who continued to visit the racetrack daily to help the animals there. After seven years of feeding, spay/neuter work, adoption projects, media outreach, and campaigning, not to mention being kicked off the racetrack more than once, Carrie finally succeeded in getting the racetrack owner to take responsibility for the suffering animals on the backside. The racetrack recently held its first fundraiser for its resident stray and feral cats. 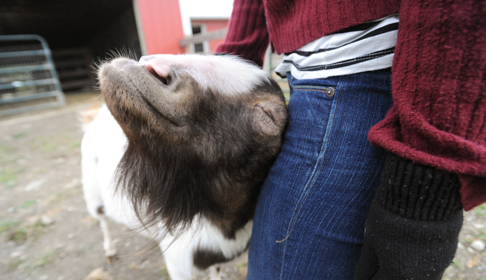 When Farm Sanctuary’s rescue team came for Gloria, we found her in rough shape. Her face and ears had been rubbed bald, and her hooves were long and brittle. The most obvious sign of neglect was the condition of her udders, which dragged on the ground and tripped her whenever she tried to take even a single step. The world she had known for eight years had been cramped, monotonous, and unhealthy. But hope had arrived.

At Cornell University Hospital for Animals, a team of vets performed a mastectomy, removing the 19-pound udders from Gloria’s 126-pound body. She recovered well from the operation, and the next day she was able to return to the Rescue and Rehabilitation Center of our New York Shelter. Gloria must have felt like she had acquired not only a new home but also a whole new body. For the first time in years, she could walk without tripping over her own udders. And for the first time in her life, she could walk wherever she wanted.

Gloria’s friend Carrie was among those celebrating her transformation. “I loved the Youtube video you did of Gloria’s rescue and was terribly happy to see her living like a goat should,” she says.

Gloria had been confined and neglected for her whole life, but she was strong. Far from breaking her spirit, the hardship at the racetrack had made her tough and sassy. And she was ready to really live at last. She quickly went from walking to running, bucking, and playing. She loved to play and roughhouse with her human companions, standing up for a head-butting session or bumping her head into a leg only to hold it there. 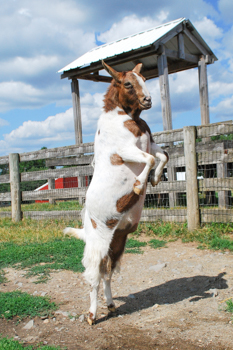 One thing she definitely did not want was to be around other goats. In fact, she was scared of them. Each time we tried to leave her with other goats, she cried out as if to say, “There’s been a mistake! I’m a human, not a goat!” We nicknamed her “Humanga,” because she was part human, part goat. When she was with people, she wasn’t scared of anything.

We eventually moved Gloria into a pen in the goat barn, so she could see the other goats but didn’t have to live among them yet. We left her door open, so she could roam the shelter. The open space daunted her at first, but soon she realized that the shelter was her playground. Then there was no stopping her. She made a point to visit the farm assistants and stir up trouble while they were trying to clean the barns. We’d get calls over the radio requesting that the Humanga be escorted somewhere less disruptive. She was very special to everyone she knew — a favorite of our caregivers and farm assistants as well as our many visitors — for her unique and powerful personality. 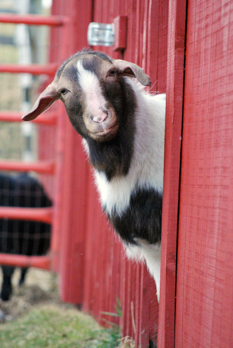 While Gloria kept residence in her private pen in the sheep barn, two little goats named Jake and Peanut started squeezing under the gate to visit her. Perhaps because they were so young and so small, Gloria didn’t seem to mind. In fact, she grew fond of them.

She also developed a soft spot for the elderly and eventually joined a herd of geriatric goat ladies — at the age of ten, she fit right in. They became her family, and she adored them, forming especially close friendships first with Juniper and, after Juniper passed away, with Dotty.

During Gloria’s initial visits to the hospital after her rescue, vets had not only removed her udders but also diagnosed her with uterine cancer. They removed the uterus as well, but the cancer had already metastasized. Treatment would not have eliminated the cancer and would likely have decreased the length and quality of Gloria’s life. We decided instead to just let her live and have has much happiness as she could. 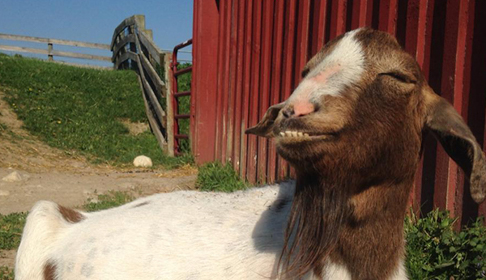 The cancer spread very slowly, leaving Gloria several years to do just that. And they were good years. Gloria had fun. She made friends. She made a home. The self that had endured quietly within her during the years of her confinement — the Humanga, the lovable, indomitable force — came out to play. And she played until her very last day. Gloria was indeed someone, not something.