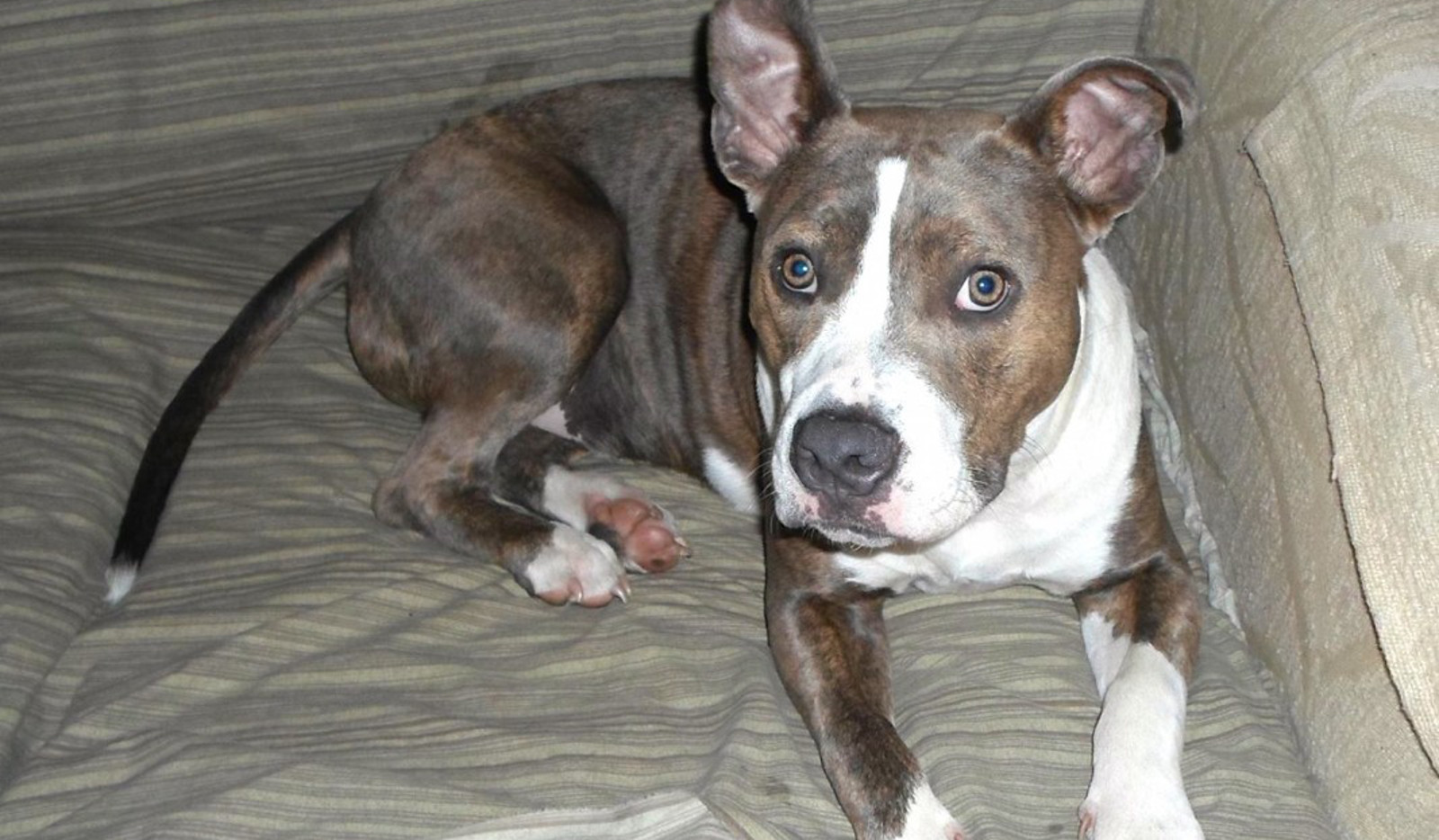 Boomer, a 10-month old Pit-Mix weighing in at only 40 pounds, was one of the three dogs in a happy loving family. One day, the family decided to move into an apartment that wouldn’t allow pets over 25 pounds. This was sad news for Boomer and his brother, as they were well over the weight limit, their little sibling, however, got to stay because she was “tiny.” Boomer’s brother was given away to a family friend and Boomer was posted in a group on Facebook as a “free to good home” dog.

Luckily, Boomer’s photo instantly garnered the attention of local animal rescue volunteers.  In a dogfighting town, a little Pittie like Boomer would not fare well. Immediately people scrambled to find him a foster home and a way to safety. Within one night, Boomer was safe at home with a new foster family. He was a happy-go-lucky kind of dog and didn’t seem to mind the new digs as long as he could run and play and get belly rubs. 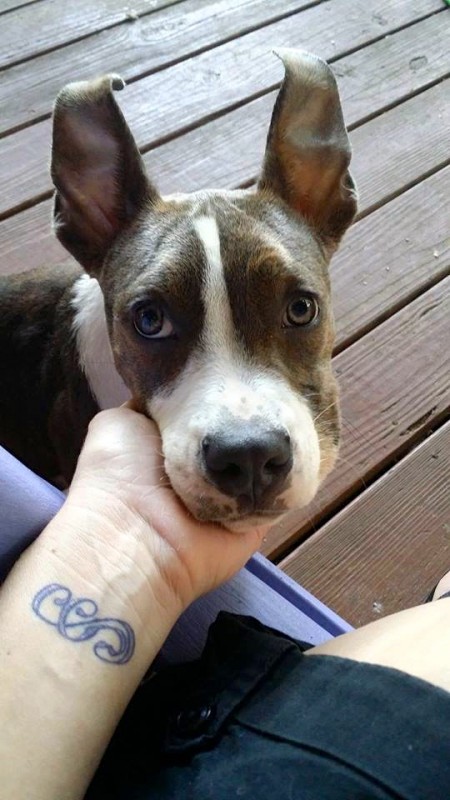 Boomer was a clumsy boy with big feet and even bigger heart who nearly burst from his own skin. He was a loving, happy, playful dog who simply had trouble containing himself in such a small body. He did indeed live up to his name, and he had the personality of a dog much, much larger.

He was settling in well, going to adoption events, and meeting new people. Everyone always stopped to pet Boomer and say, “Oh he is so adorable!” but no one wanted to take him home. So he stayed a bit longer and continued to keep his foster mom on her toes. One day though, he got a little too close to another dog’s food, and got bit by one of the bigger foster dogs. After this incident, Boomer and the other dog had to go to new foster homes – separately. 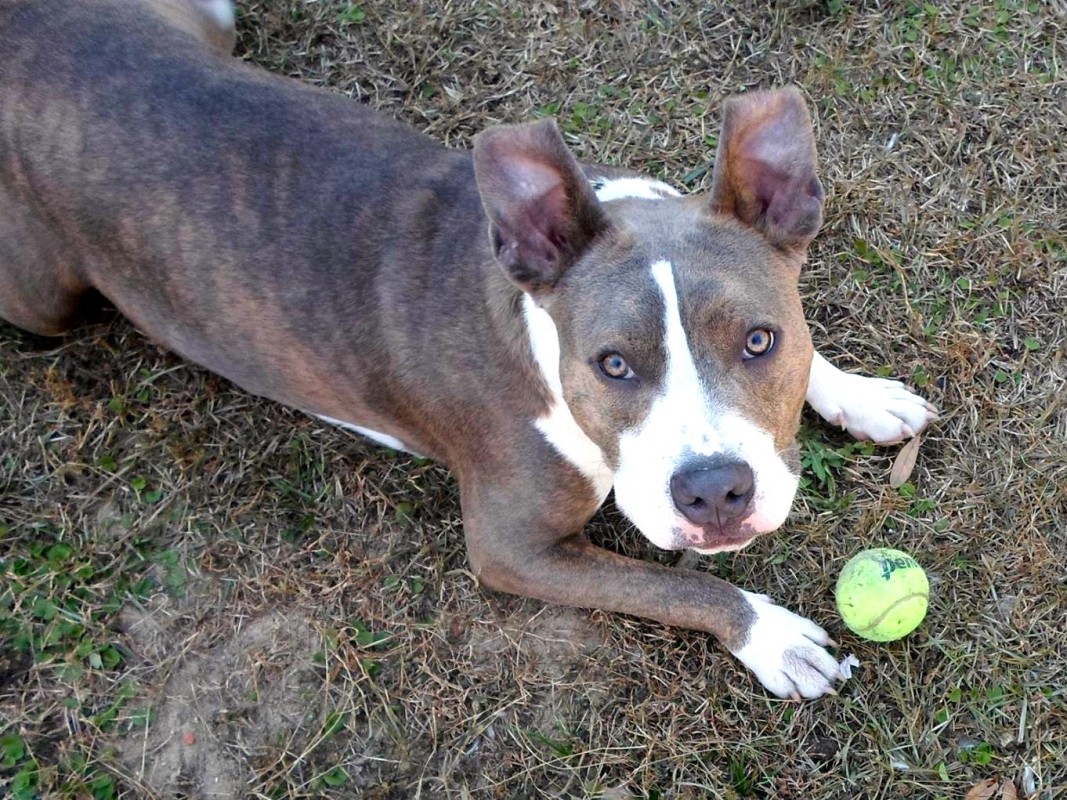 Not surprisingly, Boomer was just as happy at his new home as he had been at the last. Nothing could stop this boy – he loved life. He played with the other dogs and tried to play with the cat, though the cat quickly put a stop to that. Boomer went about his life with zest and joy, and people continued to say, “Oh he is so adorable!” but no one wanted to commit to adoption.

Then, as fate would have it, Boomer’s foster mom fell and had to have back surgery; she could no longer care for him. So off he went to yet another foster home and another new set of circumstances to adjust to.

Boomer was a healthy and had no behavioral issues but was starting to get a little sad about be shuffled around so much. Luckily, he got some much needed TLC in his new foster home, however, his forever home still evaded this small pup. 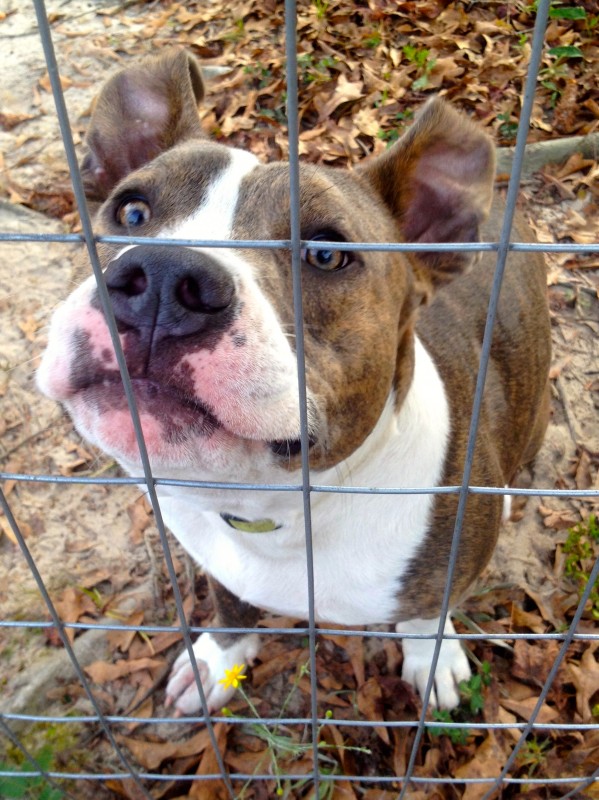 A Forever Home at Last!

Finally, someone showed interest and wanted to meet Boomer. After what had seemed like forever but was only actually three months, had Boomer’s ship come in? Everyone was excited for Boomer and had all their paws crossed this would work out.

The day finally came and as soon as the door opened, Boomer bounded into happily greet everyone. He immediately went to the children – Boomer loves kids – and gave them a sniff. They giggled and started bringing him toys and showing him his new bed. Oh, he loved the new bed.

The Power of Fostering

Without all the kind people who stepped in to foster Boomer, this poor pup’s fate could have been very different. While putting up a “free to a good home” ad might seem like an innocent action when looking for a new home for your pet, more often than not, these sort of advertisements can lead your beloved animal into the hands of someone with cruel intentions. In the area of Florida where Boomer lived, for example, dogs of his breed are easy prey for the dog fighting industry. Rather than giving up on Boomer when they struggled to find him a forever home, the kind people who volunteered to foster him helped ensure this pup would have a happy, loving life – they may have even saved his life.

If you are not in the position to permanently adopt a pet but would like to help homeless animals in need, you should consider fostering. There are so many animals, like Boomer, who just need a little more time to find the perfect homewho are never given this chance in overcrowded shelters. It is a short-term commitment that can lead to a lifetime of happiness for a needy animal. To learn more about fostering an animal, contact your local rescue shelter.