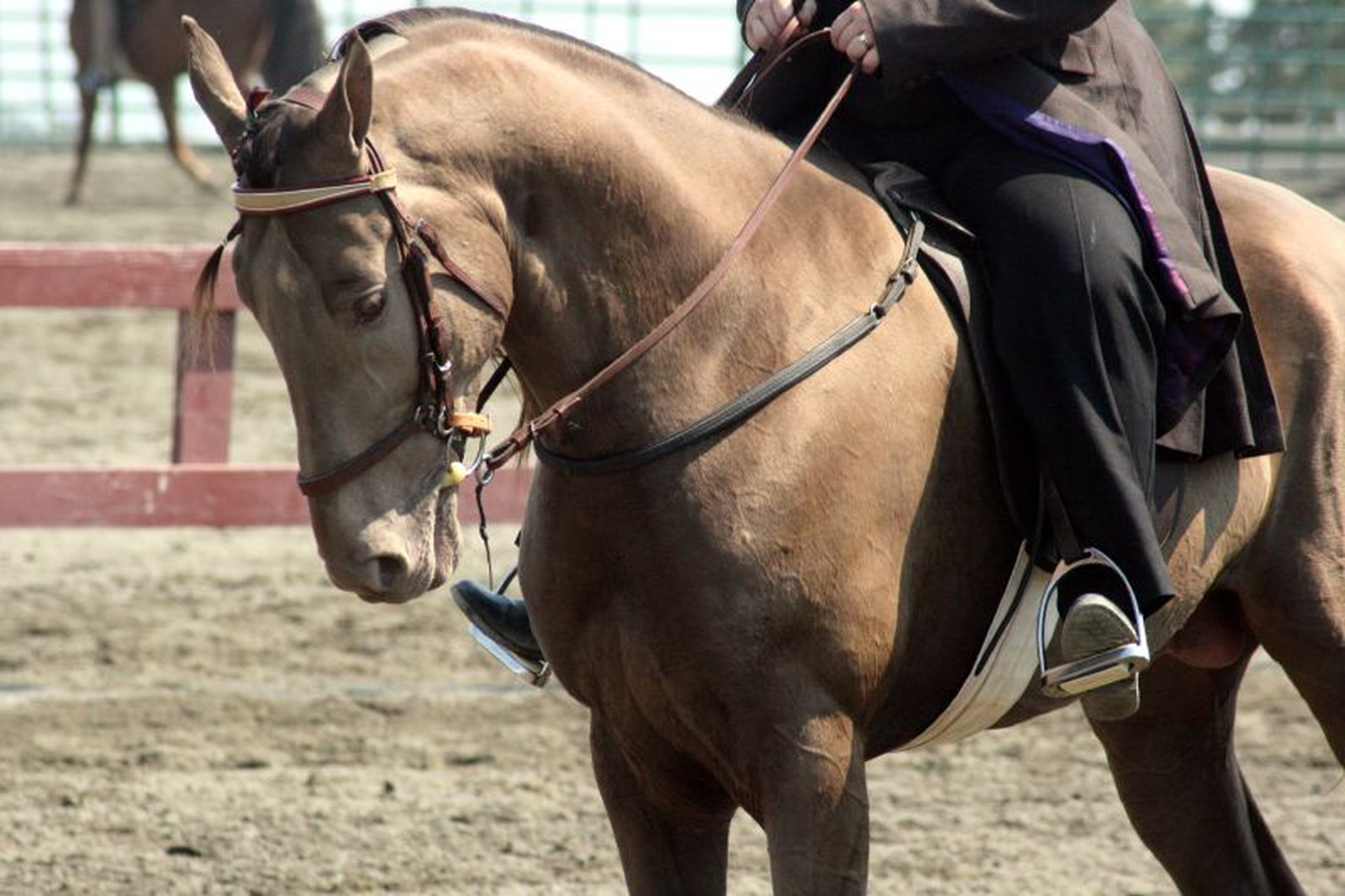 For those of us who are familiar with equestrian shows or may even have a knack for equestrian sports, we are accustomed to the posh appearance of fancily clad riders on top of perfectly clipped, athletically built horses. While there are many different kinds of equine events that can capture the attention of even the least horse-savvy people, one popular sporting event is that of the Tennessee Walking Horse Celebration.

The Celebration recently held it’s 76th annual event in Shelbyville, Tennessee where nearly a quarter of a million tickets were sold. Considered to be the showcase performance competition for horses, the event looks for a horse’s ability to display the “Big Lick” gait – a movement exhibited when Tennessee walkers swiftly lift their front legs high into the air as they waltz around an arena. Horses are judged on the combination of the over-stepping walk with the typical nod (or rhythmically bob their heads up and down as they walk).

While the competition is specific to Tennessee, similar events occur nationwide (especially in Kentucky) and encourage visitors to gather for an “incredible” experience to view the graceful dance of the Tennessee walking horse. Also, other horse breeds – such as the Hackney horse – have been used as high-stepping show breeds, but due to their graceful charisma, Tennessee walkers remain the traditional breed in the Walking Horse Celebration.

With more than $650,000 in prizes and awards up for grabs, and fair favorites such as decorating contests, dog shows, and trade fairs, who could turn down such an awesome opportunity to enjoy some good old, traditional equestrian fun? Right?

While we would love to support such a grand event that celebrates the beauty of horses, we can’t exactly provide much (or actually, any) positive feedback about this one. Behind the scenes of this “magnificent” show, is the abhorrent practice of horse soring (or abusing a horse until it performs in the “appropriate” manner).

It’s time to saddle up and truly understand the suffering of the Tennessee Walking Horse.

Tennessee walking horses are known for having smooth gaits that virtually lack any form of bounce when being ridden. Their “running walk” involves a swift pacing movement across an arena with the two front legs being lifted high into the air … one after the other. This movement comes naturally to the breed, and can be quite incredible to watch. The problem is that the high step is so valuable to competing horse owners that they are willing to abuse their animals in order to win.

With over 2,000 horses entered annually to the 11 day Tennessee Walking Horse Celebration, stakes at this competition are pretty high. As the result, some owners and trainers will stop at nothing to assure that their show horse is declared a champion at his or her game.

One of the main ways to get a horse to achieve a “Big Lick” gait is through specialized shoes. If a horse will be entered into a walking competition, the toe of the hoof is encouraged to grow while the heel is shaved down excessively. This “unbalanced foot” is then adjusted by forcing horses to wear built up pads, stacks, or weighted shoes made of leather, rubber, and plastic. In order to attach the heavy burdens, nails and other metallic items are hammered into the foot. 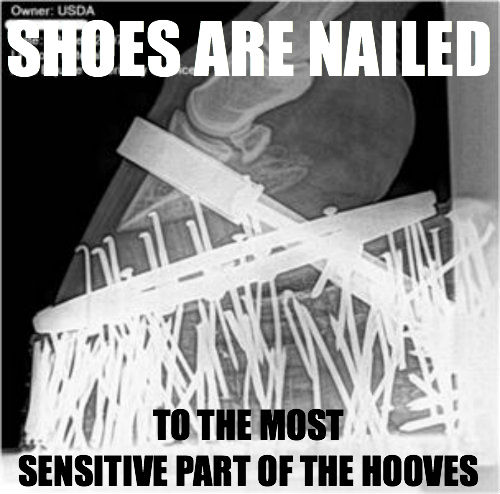 Another method used for this competition, which has gained much criticism from animal rights groups, is called soring. Soring is the term given to the act of harming a horse’s legs or hooves to force the animal to perform an exaggerated step. There are several methods of soring, the main one is to spread toxic chemicals (ie. mustard oil, diesel fuel, kerosene) onto the horses front limbs in order to cause extreme pain. To add further insult, trainers will also wrap heavy chains around their horse’s legs so that, during riding sessions, the metal weights slide up and down an animal’s already raw legs. As a result, the horse will pick up it’s forelegs high into the air in order to avoid further irritation. 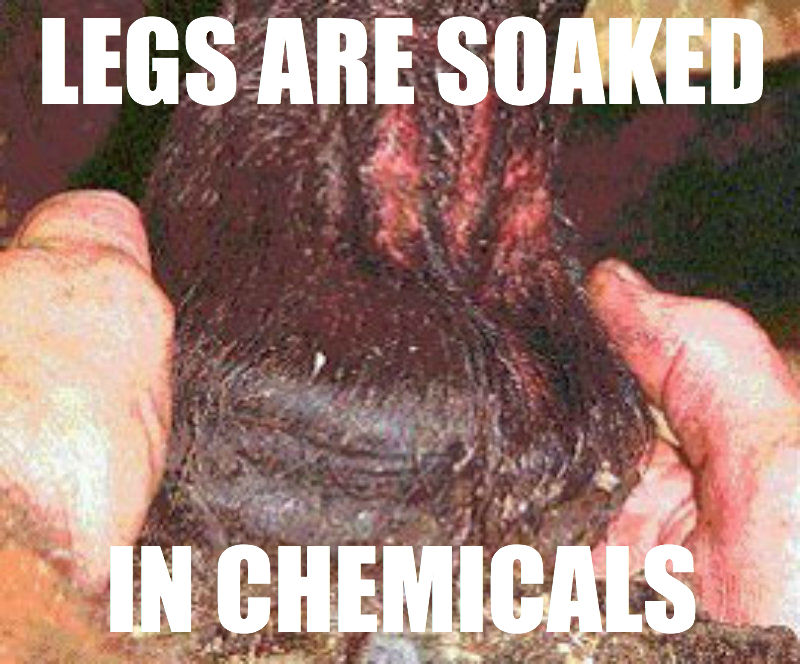 Soring also involves cutting off a horse’s front hooves and nailing on heavy shoes that can cause excruciating pain to the sensitives soles of a horses foot. Nails and other rough objects may also be placed on a horses hoof to (again) inflict pain and force the horse to avoid placing pressure on already damaged legs. 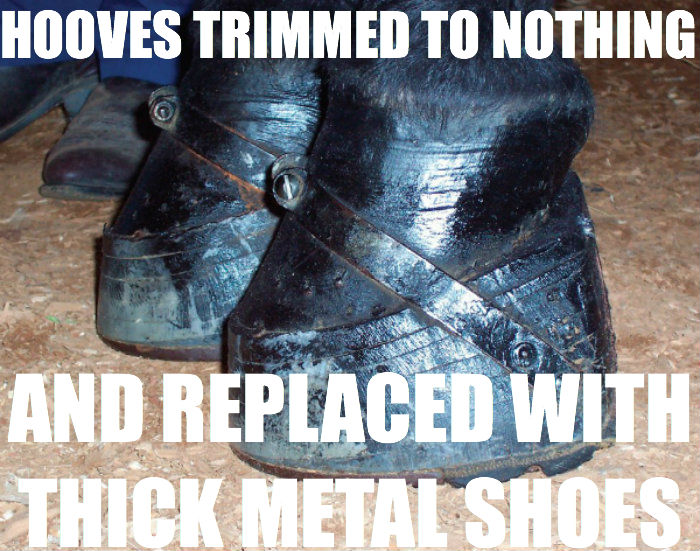 Seeing as how judges at walking horse competitions appreciate the “Big Lick” (or the term given to an exaggerated gait), horse trainers are continuously encouraged to partake in these cruel and painful acts of animal abuse. In fact, approximately 67 percent of horses entered in the 2013 Celebration tested positive for having substances on their legs that easily hide chemical burns and scars.

Soring has been known to occur in the “Walking Horse community” for about 44 years, and even though Congress and other animal rights organizations have spoken out to support the welfare of horses, the abusive process still occurs to this day. One of the most notable incidents in the fight for Tennessee walking horses occurred in 2012 when the abusive training methods of Jackie McConnell approached the spotlight in appalling videos. 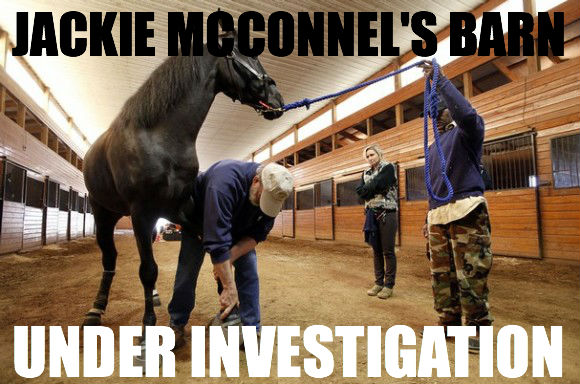 McConnel is a well-known horse trainer who would beat and oversee the soring of horses during training sessions. Once considered to be a hearty member of the Tennessee walking horse hall of fame, McConnel was convicted in federal court for violating the Horse Protection Act. In 2012, he plead guilty to 12 out of 22 acts of animal abuse, and ended up being placed on house arrest in addition to having to pay a $25,000 fine. Jeff Dockery and John K. Mays – two of McConnel’s co-defendants – also plead guilty to three and 14 counts (respectively) of animal abuse in 2013. 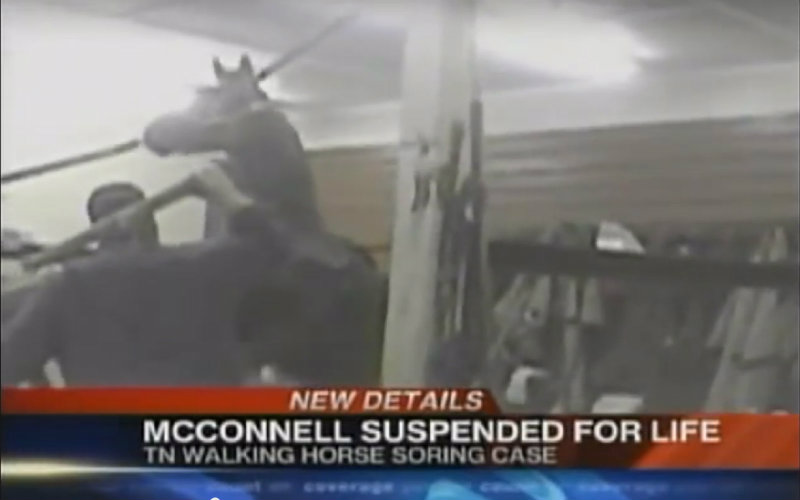 In early March, it was declared by USA Today that a full on battle was occurring in Congress centered on how to protect walking horses from abuse. Two bills now aim to cease all abusive practices when it comes to training horses.

The Humane Society of the United States, several horse specific organizations, veterinarian groups, and big-time celebrities such as Priscilla Presley and Alyssa Milano backed one of the bills.

This bill aimed to pass the Prevent All Soring Tactics (PAST) Act that would “amend existing federal law to end the industry’s failed system of self-policing, ban the use of devices implicated in the practice of soring, strengthen penalties and make other reforms needed to finally end this torture.”

3.  Make Yourself at Home

Horses serving a life sentence as a beat of entertainment in the walking horse industry are never relieved of their suffering. Instead of being turned out to graze in a pasture to enjoy the company of a few close herd-mates, Tennessee walking horses are forced to stay inside their stalls.

According to the Examiner, the only time these horses are freed from stalls are when they are being trained, showed, or traveling to a show.

The process of soring also takes place in the “comfort” of a stall. Trapped in a secluded pen with little to no room to move, these horses have chemicals literally cooked into their flesh … and all for the sake of showing off at a show. 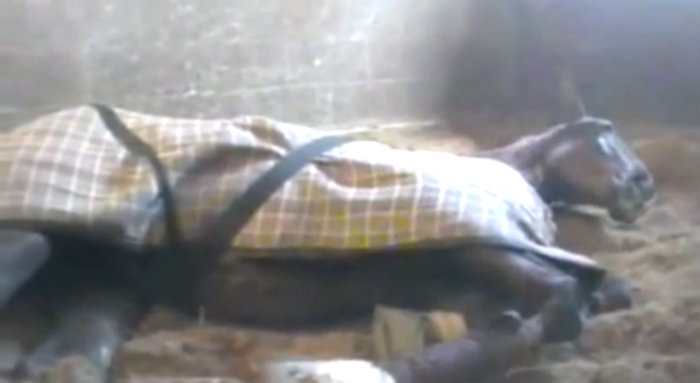 With so much controversy facing the Celebration, new technologies have been created to help horse inspectors check for chemicals or other traces of soring before competitions.

When the scarring on a horse’s legs are too deeply inflicted to pass inspection, the animal’s are tossed aside and often sent to slaughter houses. Such was the case for Dutch, a Tennessee walker who had been so badly abused that even his abusers didn’t want him. Luckily, he was rescued by another organization who happily found him a forever home that could replace a lifetime of abuse with a future overflowing with love.

While Dutch’s story has a happy ending, it is important to understand that thousands of horses are trained through soring every year, and not all of them are able to escape to greener pastures.

4.  What YOU CAN and MUST Do to Stop the Suffering

While we are not saying that you should disagree with all horse shows and sporting events, we do recommend that you check out the truths behind welfare issues surrounding events such as horse racing, “breed greed,” or – of course – soring.

That being said, if nobody attends a show, how will these events continue? The answer is simple … they won’t continue. Without any form of general support or incoming profit, Tennessee walking horse shows will have to be cut from the ring. The easiest way to end your support of these so called “celebrations” is to simply cease attending the events.

Furthermore, The Humane Society of the United States has provided one of the easiest ways for you to get involved. Simply visit this website and sign their petition. A pre-written letter will be sent along with your signature to Legislation that will call for further protection of Tennessee walking horses.

Take further action by making a brief call to your U.S. senators and representatives in regards to ending the practice of soring. With just the click of a bottom, you can release these tortured horses from a life of pain and suffering.

Spread the word and help save these tortured “beasts” of burden. Share this article on the Tennessee Walking Horse Celebration’s link on Trip Advisor, or share a couple of facts about what you have learned about the painful practices that happen behind the scenes of walking horse events. If you have been to one of these shows in the past, please share images of the scenes and tell others why they shouldn’t support these shows.

When you know truth, it is your duty to share, so share away Green Monsters and let’s shut down this cruel horse exhibition!