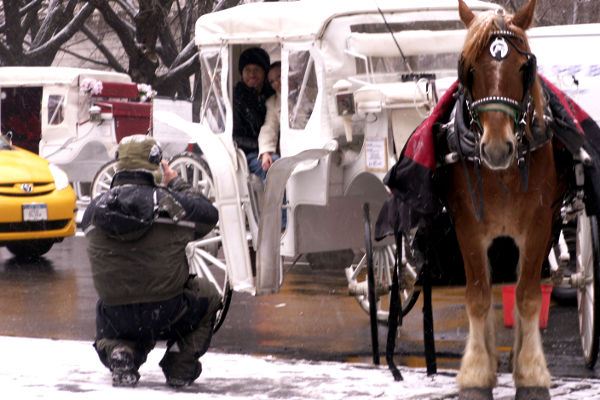 It’s advertising hype that keeps the carriage business going because the reality is far different than the fiction.

The number of holiday customers has dwindled in recent years, either because more tourists are becoming educated to the harshness of this institutionalized cruelty or it’s too expensive at $50 plus tip for only 20 minutes.

A carriage ride through Central Park is a traffic jam of horse carriages, one lined up right after the other — sharing the road with bikers, roller skaters and joggers  on weekends and all that plus cars and taxis during the week.   The ride is not smooth, the view is one of congestion, and the only amenity is a blanket that is used over and over again.

Most tourists are not even aware of the horses.  It’s just something they need to check off their list and say that they’ve  done it – like going to Times Square on New Year’s Eve – a touristy thing to do.   I’ve seen them get into the carriage, often with young children in tow, oblivious to the horse–who could be a machine for all they cared.   Often the young child looks sad to see pictures of downed horses on posters held by the many activists who continue to protest this business.  The kids understand it.   At the end of the ride, passengers often pose for pictures in the carriage with the driver leaving his horse unattended while he photographs them.  The horse is ignored – thought to be “just a horse” – an enslaved beast of burden, with no mind or intelligence of his own.

New York is a very fast-paced crowded city.  As if the congestion in Central Park is not bad enough, in the late evening, the carriages can go into Times Square until 3am in the morning to ply their trade.    The horses travel over hard asphalt, which can cause concussive leg injuries, and their noses are always at a level close to the exhaust fumes from vehicles.

The NYC carriage horse leads a grueling, punishing existence – particularly during this time of year.  Although the drivers are supposed to give the horse a 15 minute break every two hours, they don’t, and there is no one there to enforce the laws.  If there’s a prospective customer waiting, the driver will take him–regulations be damned.  Money is the key.  If there’s a group of people with five adults, or other unlawful combination, the drivers will often take them if they think they won’t be caught.  They constantly make u-turns coming out of the park or on Central Park South.    And they continue to get away with it.

These horses are often worked till they drop as one did on December 4, 2011, collapsing in the street with a carriage filled with tourists.   Horses are legally allowed to work every day – 63 hours a week.    At the end of their shift, they go back to their stable – the furthest about 2 miles from Central Park.  They cannot lie down and stretch out comfortably because their stalls need be no bigger than 60 square feet – much too small for a draft horse.  To make matters worse, for 47 weeks out of the year while they work, they have no turn out to pasture.

Many tourists assume the horses live in Central Park.  They don’t.

As prey animals, horses’ natures are such that they are always in danger of spooking even from subtle external stimuli and bolting into traffic – injuring themselves, the driver, passengers – or worse.

The carriage drivers try hard to denigrate and dismiss activists but many travel guides also advise tourists not to take this ride.    Frommer’s  travel guide to NYC listed carriage horse rides among “Things Not to do in NYC,” asking tourists to “pity those poor beasts of burden, who appear so forlorn as if pulling carriages is the last thing they want to do… Horses belong on city streets as much as chamber pots belong in our homes.” Fodor’s advises tourists to “skip the horse-drawn carriages,” which will leave you “guilt-ridden about the poor, plodding horse; and broke.”(Getting Around Like a Local”)

New York is a great city, with many things to do that are fun and even free.

Walking and exploring in the park at your own pace can be a delight and something that should definitely be on everyone’s bucket list.