Determined to be a ‘Different Kind of Dairy Farmer,’ Woman Sends Beloved Cows to Sanctuary 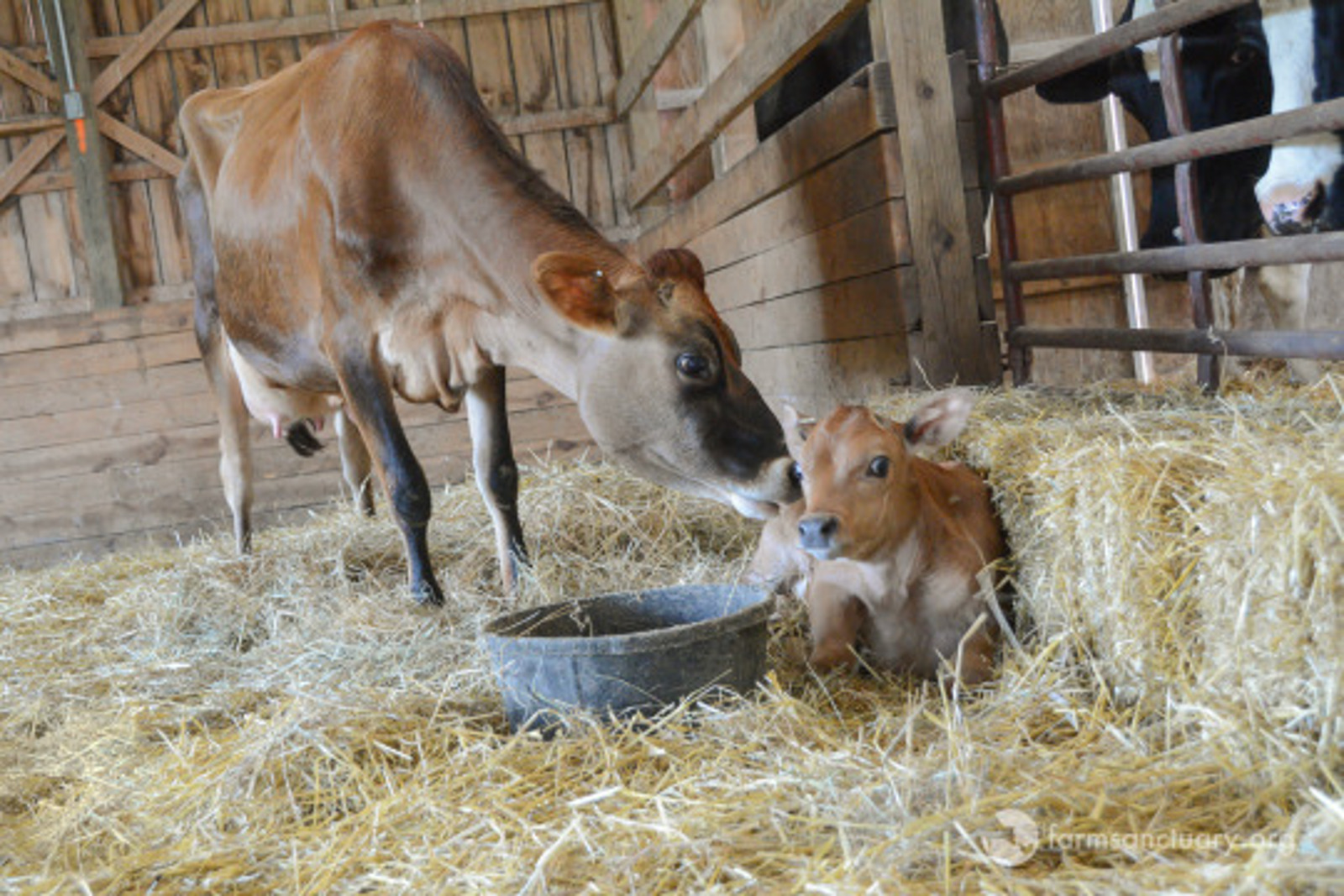 Once upon a time in rural Pennsylvania, Angela, a vegetarian, decided she was going to raise her own cows. She wanted to be a different kind of dairy farmer. She would run a small-scale operation, let her cows keep their calves, and never send any of the cattle to slaughter. But as Angela would soon learn, she had bought into a fairy tale. Instead, she would have to face some real-world decisions and make a choice that would change everything for her cattle … and her.

Angela and her husband started with two cows (Lucy and Lily, both only a week old), and kept them in the backyard of their family home. But calves grow quickly and there simply wasn’t enough space.  Angela’s husband told her they’d have to give Lucy and Lily away. It was a tough pill to swallow, but Angela took comfort in knowing they were going to a local farmer; someone who said he would put them out to pasture. Sadly, she would discover, that shortly after taking the cows in, he’d placed them in the stockades.

Angela wasn’t about to see these cows she’d bottle-fed and hand-raised be subjected to such a sad life. And she was even more determined to be the change she wanted to see for cows just like Lucy and Lily. So she convinced the farmer (and her husband) to let her take the cows back. This time, she’d ensure her bovine friends were able to live out their lives in peace. The couple bought a 92-acre property and embarked on their own small-scale dairy.

Their mini farm grew; they’d introduce two more calves. And they brought in a bull. If Angela wanted to run a dairy, she’d need to breed – after all, cows, like all mammals must be pregnant or nursing in order to lactate. She’d also need to sell that milk. 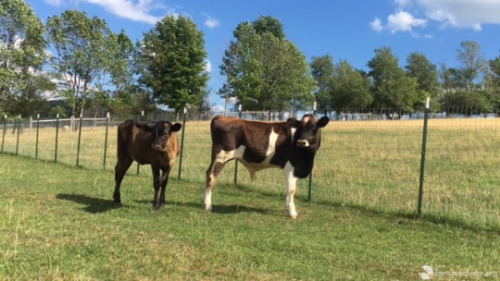 Hope now with her best bovine buddy Matthew at our NY Sanctuary.

Once again, luck was not on Angela’s side. Times were tough. She couldn’t find anyone who wanted to buy her little dairy’s milk. A series of rather unfortunate events (punctuated by the loss of Angela’s beloved Lucy) would follow.

Angela did not want to give up, but her husband decided that enough was enough. He was going to put the farm on the market, and they would have to get rid of the cattle once and for all. Angela was grief-stricken; she didn’t want that for them. She desperately reached out to just about every rescue group she could find. And thankfully, our friend, Mike Stura, founder of Skylands Animal Sanctuary & Rescue, happened to spot her plea. 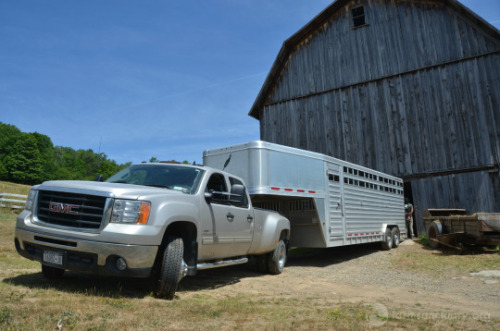 Loading up the trailer for the trip to Farm Sanctuary

Mike couldn’t take the tiny herd himself, but he would help secure placement. We agreed to take in two of the cattle, Liz and her four-day-old calf, whom we’ve named Cashew; two others will stay at our New York Shelter until they are cleared for placement and a second mother and daughter stayed only a few days en-route to their new forever home. 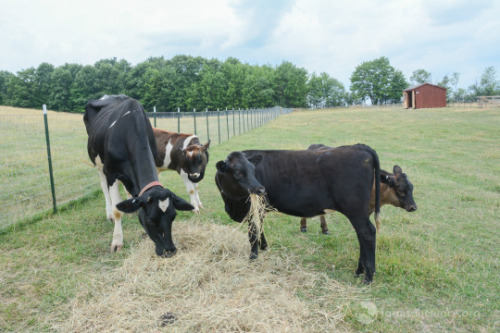 The new kids on the pasture.  Mother Holstein Gracie and her daughter Esther have already gone to their new home.  Matthew (back left) and his best gal pal Hope (back right) are getting healthy and prepared to go to a new home.

A New Life for the Cows

As it turned out, Liz and Cashew had to spend the first week at Cornell University’s Nemo Farm Animal Hospital for ketosis (this condition usually occurs in early lactation when there is a huge increase in energy requirements for milk production and animals are unable to produce enough glucose), mastitis, and pneumonia. Little Cashew had an umbilical infection that required surgery. These conditions are not unusual in cattle we bring from dairy farms; both large and small farms. Luckily, we were able to get them treatment and our new family members are back and happy.

Angela wanted to be a different kind of farmer. Instead, she has some advice for anyone who wishes to start their own dairy, “I would suggest someone not do it.” 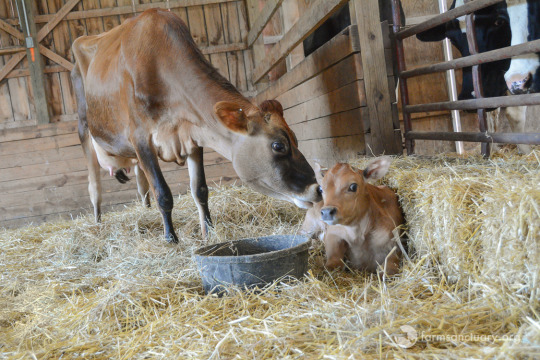 Liz and Cashew were quite the spectacle among the welcoming committee (aka Farm Sanctuary’s main herd including from left to right Ted, Conrad, and Leo).

We are so grateful to Angela for putting compassion first; for honoring lives over profit; for recognizing when she’d reached her limit; and for making the difficult decision of quitting farming when the odds were not in her favor.

Please share this story and help us honor Angela’s choice and the cattle who will now have the opportunity to live out the lives she’d envisioned – without the pressure that comes when animals are raised for profit.

Together, we can encourage awareness and understanding about such unique individuals as well as the unfortunate truth about the dairy industry. With a growing number of delicious dairy-free options and recipes, it’s never been a better time to make the switch. And it is one of the easiest ways to honor the animals for whom Liz, Cashew, and their friends serve as ambassadors.

An act of love brought these cattle to sanctuary; your support broadens this circle of compassion to make a difference for these deserving individuals and so many others just like them.