By Wayne Pacelle and Jim Keen 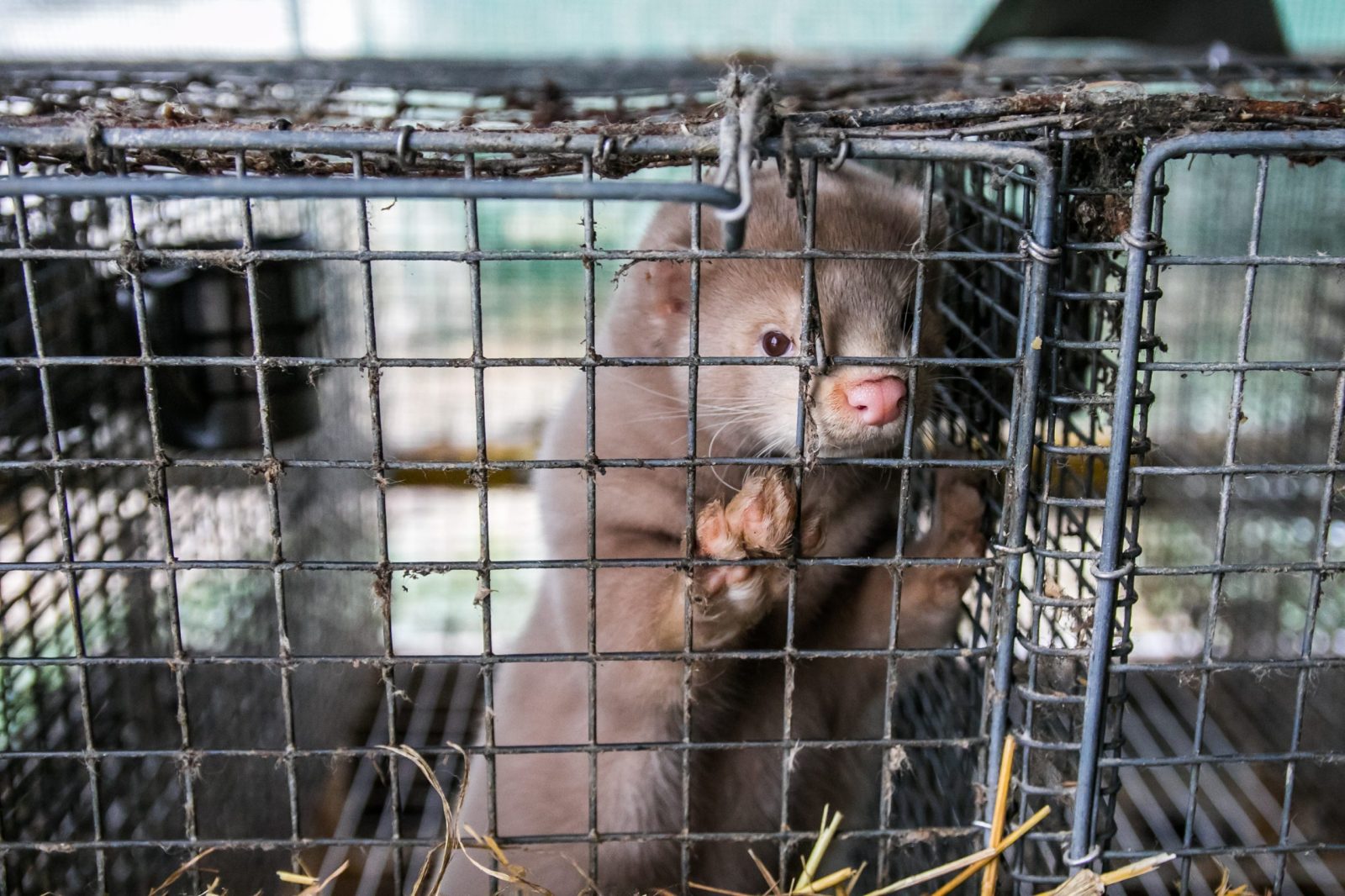 We don’t know much about SARS-CoV-2 variants that have emerged in China or Russia, chiefly because of state control by their authoritarian governments. But we do know a good bit about mink farming and its role in the spread of SARS-CoV-2 in the democratic world after the pandemic began hopscotching across the globe.

Mink farming in Europe and North America has led, at the very least, to the emergence of four mink-origin mutants – at least one each in Denmark, France, Poland, and the United States (Michigan). The virus originally spread from humans to mink, then mutated in the mink, who in turn infected people with the variant.

But getting the info on the U.S. spillover hasn’t been easy. There’s been something of a coverup here.

National Geographic and the Detroit Free Press reported earlier this month that the U.S. Centers for Disease Control and Prevention delayed by several months the reporting of the mink-to-human SARS-CoV-2 spillover event in western Michigan in late 2020. All zoonotic diseases start with a single transmission, and the U.S. regulatory agencies underplayed, downplayed, or ignored the emergence of a new variant that had the potential to infect millions of people in our country.

The risk of a new runaway mink variant provided a compelling justification for the approval by the U.S. House of Representatives of an amendment to the America COMPETES Act in February to ban mink farming in the U.S. Now a “conference committee” composed of a subset of House and Senate lawmakers will reconcile the differences between the America COMPETES Act passed by the House and the United States Innovation and Competition Act (USICA) passed by the Senate. (Make your voice heard on this issue by clicking here TODAY!)

To be sure, when it comes to competition with China, the U.S. will have debilitated itself if it allows new zoonotic diseases to kill its citizens and disrupt Americans’ social behavior and the health of its workforce. While AIDS, Mad Cow Disease, and a range of other zoonotic diseases have caused major disruptions to the functioning of our nation in recent decades, SARS-CoV-2 has delivered more death and economic and social chaos than any other pandemic since the Spanish flu of 1918.

What most people fail to recognize is that a massive worldwide SARS-CoV-2 epidemic in farmed mink has paralleled the human COVID-19 pandemic, with outbreaks on at least 450 mink farms in 13 countries in Europe, Canada, and the United States. The virus has infected at least a third of the U.S.’s 60 or so mink farms.

Based on the trove of studies on the subject and an understanding of the pathways for viral transmission and mutation, here’s one more thing we know: if we allow mink farms to continue to operate, more mutant strains of SARS-CoV-2 will emerge and spread. We don’t know if these variants will affect dozens of people or millions of them. It’s a roll of the dice, and an emerging variant, with certain transmission and virulence characteristics, has the potential to go global and throw us back into crisis.

A massive worldwide SARS-CoV-2 epidemic in farmed mink has paralleled the human COVID-19 pandemic, with outbreaks on at least 450 mink farms across the globe.

In terms of risk assessment, there is a very plausible likelihood of a high-consequence adverse event from a small industry that produces a commodity for export to elites in China – and a luxury product for which there are plenty of alternatives in the 21st century.  Nobody needs or wants fur coats in the U.S., and in China, nobody needs them; they are an indulgence of the rich.

The Chinese people who choose to buy the pelts of American mink are unwittingly outsourcing the risks associated with production to the United States.

We as a nation made enormous sacrifices during the pandemic. Government decrees shut down millions of businesses for months to forestall bigger problems and massive viral casualties. Many businesses never recovered. In response to those dramatic government policies, the U.S. government pumped trillions of dollars into businesses, the bank accounts of consumers, and other aspects of our economy to compensate them for the crisis response.

When it comes to banning mink farming in the United States, it would mean compensating just 60 small businesses to address the most recognized and well-documented non-human SARS-CoV-2 risk in the world.

It’s a relatively easy step to take, considering what’s at stake: humans (Homo sapiens) and the American mink (Neovison vison) are the only two species documented to contract the virus in large numbers and to be able to spill it back to other species – with more than 21 million captive mink (includes culling) and more than 15 million people perishing directly as a result of the pandemic.

Before the news of the CDC’s cover-up of the emergence of the mink variant in Michigan, there was a risk assessment conducted by three international inter-governmental agencies with human health – World Health Organization, World Organization for Animal Health, and Food and Agriculture Organization – for the 36 nations that raise mink. That qualitative risk assessment (QRA) combined an estimation of the likelihood of a hazard (ranging from impossible to certain) with the severity of its consequences (from negligible to catastrophic). Based on a QRA in 2021, the U.S. and Canada are the “highest risk countries in the world” for SARS-CoV-2 spread from (1) farmed mink-to-farmed mink; (2) farmed mink-to-humans; and (3) farmed mink-to-wildlife, an unwanted public health risk “trifecta.”

In Denmark and the Netherlands in the spring and summer of 2020, when mink farm outbreaks were first discovered, rapid near-exponential transmission (via unknown modes) continued between mink farms despite enhanced bio-security, early warning surveillance, and immediate culling of all mink on SARS-2 infected farms. This failure of traditional veterinary disease control measures drove public health authorities to (1) cull all captive mink raised by the thousands on factory farms and (2) ban mink farming temporarily or permanently.

Most state and federal authorities in the U.S. don’t even know the numbers or locations of active mink farms. That’s what makes the downplaying of the risks by the CDC and USDA seem so naïve and dangerous. Their failure to properly assess risk derives from their inaction in studying the zoonotic disease pathways between mink and humans or conducting fieldwork and surveillance on what is happening in and around mink farms.

It turns out that when authorities dug deeper into these problems, as Canadian scientists did in looking at the Michigan circumstance, they learned more about the severity of the threat. So did European authorities investigate outbreaks there? For example, when Swedish authorities actively surveilled 26 of its 28 active operating mink farms in 2021, they found 23 farms (88.4 percent) were SARS-CoV-2 seropositive – a higher rate of exposure than any authorities had ever imagined. Before that surveillance work, authorities there too had also underplayed the threat.

The U.S. mink industry, in a downward spiral even before the pandemic, generated 1.4 million pelts (5 percent of global production) at a farm-gate value of just $47.4 million in 2020 (with costs exceeding revenues by millions). It makes little sense to keep afloat a dying, subsidized industry that threatens human and wildlife health for a luxury fashion item that Americans do not want.

What’s more, with the collapse of more than half of the global mink farming industry, we could see a domestic surge in this inhumane and dangerous factory farming practice. That would be akin to China shutting down its wildlife markets because of the zoonotic disease threats, but U.S. live-wildlife entrepreneurs opportunistically jacking up production because of that loss in global production, viral consequences are damned. Their short-term profit motive could cost trillions and lead to massive losses of human life. “Penny wise and pound foolish” doesn’t begin to convey the asymmetry of the rewards and costs.

Want to be heard on this critical issue? TODAY IS THE DAY TO DO IT! Follow this link to be instantly, easily put in touch with YOUR elected officials!

ABOUT THE AUTHORS. Wayne Pacelle, a two-time New York Times best-selling author, is president of Animal Wellness Action. Jim Keen, D.V.M., Ph.D., is the director of veterinary programs at the Center for a Humane Economy.