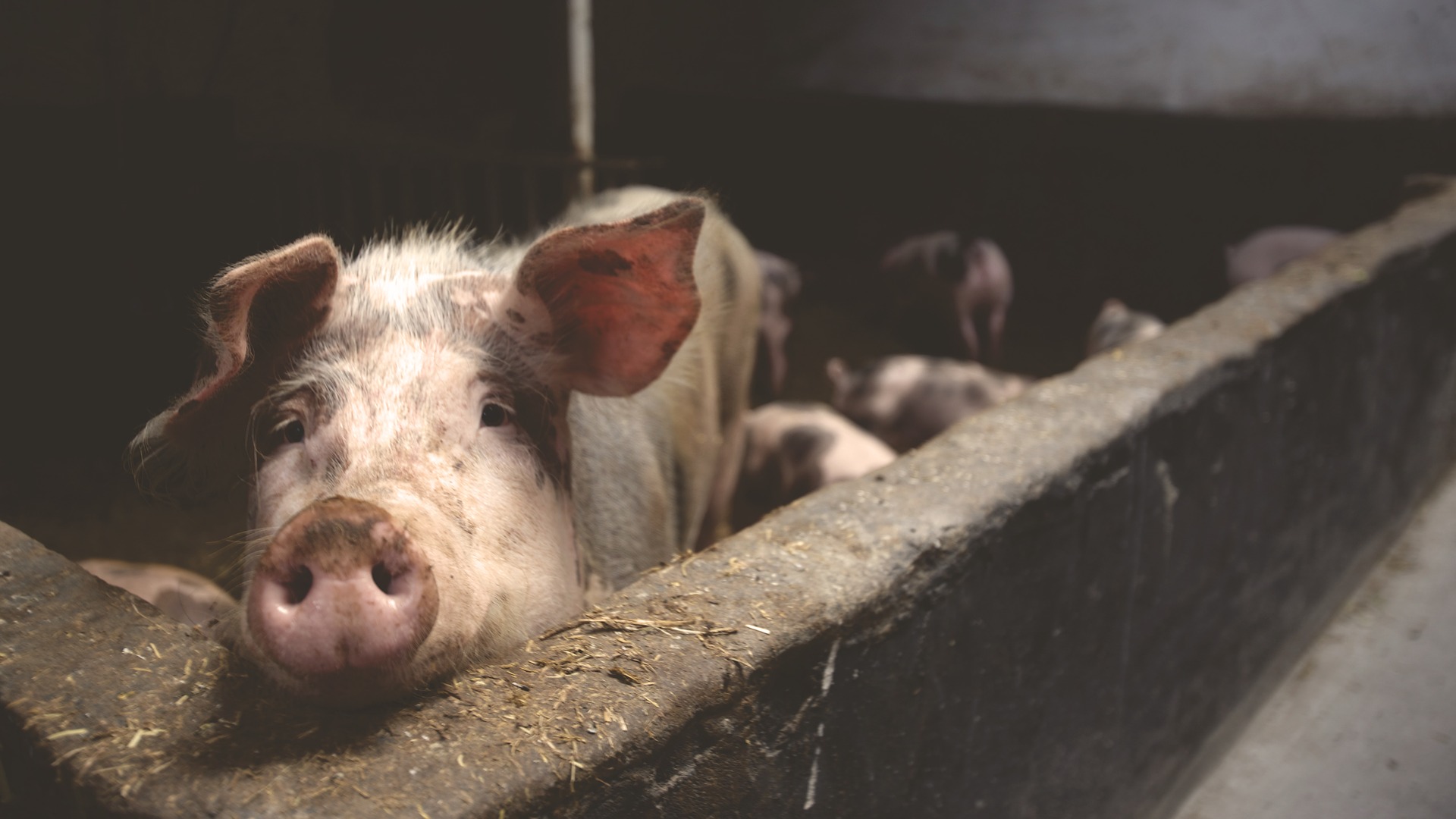 Talk of zoonotic diseases has increased in public discussion since the rise of COVID-19, however, diseases that are transmitted from humans to animals have had a long history. In fact, 6 out of every 10 infectious diseases in people are zoonotic.

The prevalence of zoonotic diseases is mostly due to human encroachment on animal habitats as well as human consumption of animals. Contemporary farming practices have only exacerbated these problems. In order to maximize profit, most farms keep animals in cramped, unsanitary facilities where diseases spread rapidly. To survive in these squalid conditions, animals are given an excessive amount of antibiotics.

The abhorrent treatment of animals in the agricultural industry is obviously detrimental to the animals themselves and the environment. Now, in the midst of a pandemic, more people are becoming aware of the ways that the consumption of animals also directly affects public health.

For a better understanding of the history of zoonoses, here are 10 examples of diseases that have spread from animals to humans.

“Mad Cow Disease” is a degenerative neurological disorder that originated as a prion disease affecting sheep until it developed into bovine spongiform encephalopathy (BSE) and finally, the human variant known as Creutzfeldt-Jakob disease (vCJD).

This disease exemplifies the detrimental effects of factory farming, which often aims to mitigate costs in order to achieve the highest profit. For the beef and dairy industries during WWII, maximizing profit involved feeding cattle cheap, high-protein diets, such as the “ground-up remains of slaughtered sheep and other cows. This practice continued in the post-war United Kingdom, where cows were fed sheep infected with a prion disease known as “scrapies.” By 1986, this disease had adapted into BSE, which in turn, spread to humans who ate diseased beef. When the outbreak peaked in 1993, this disease killed 180,000 cows and 150 humans. While mad cow disease is not prevalent today, the practices that precipitated this outbreak are, indicating that unless we see changes in the animal ag industries, similar diseases are likely to arise again.

The 2009 H1N1 swine flu pandemic is believed to have originated from a strain that first emerged in U.S. factory farms in 1998. Due to the densely packed concentrated animal feeding operations (CAFOs), viruses can rapidly spread between animals and evolve into different strains. The immunological stress of such living conditions further promotes such a rapid transmission and mutation. According to the CDC, the H1N1 pandemic caused the deaths of 284,000 people globally. While vaccines now protect against H1N1, zoonotic diseases are often highly adaptive. As recently as July 2020, the CDC has identified a “G4” swine flu as a concern, as humans will not lack immunity to this virus.

E.coli bacteria naturally live in the intestines of both human and nonhuman animals, however, some strains can create Shiga toxins that cause illness. Even healthy animals can have STEC in their intestines, and this bacteria can show up in their feces. Because of the grotesque environments of factory farms, animals are often forced to wade through their own excrement each day. These conditions allow for the spread of STEC as the bacteria can directly contaminate meat during slaughter or milk during the milking process. In September of 2018, there was an E.coli outbreak that led to 17 illnesses, 1 death, and a recall for 130,000 pounds of ground beef. Similarly, runoff from factory farms can infect water supplies and produce. In 2000, E.coli contamination in Ontario was responsible for the deaths of 7 people. This deadly outbreak was caused by cow manure seeping into the town’s water supply. This disease remains a risk factor today due to the unsanitary conditions of factory farms.

Much like STEC, salmonella is often transmitted to humans from factory-farmed animals living in squalid conditions. Over the years, the egg industry has been at the center of conversations surrounding salmonella outbreaks. Since these hens are concentrated in densely packed cages, when one gets sick, the illness is nearly impossible to contain. The CDC estimates that salmonella is responsible for 420 deaths in the United States each year. Although this is not the most fatal zoonotic disease, reports show that these bacteria are becoming increasingly resistant to antibiotics which could increase the fatality rate in the coming years.

The most common form of bird flu is H5N1, which originates in waterfowl but is easily transmissible to domestic poultry. In 1997, the first case of H5N1 was detected in Hong Kong and the outbreak following was linked to contact with infected poultry. While there is no evidence that bird flu can be spread to humans from consuming properly cooked poultry, human consumption of these birds is culpable for the spread of this disease to farmers and those who come in contact with them. Similarly, even though H5N1 is not easily spread amongst humans, with a mortality rate of about 60%, this disease is still quite alarming. As with many zoonoses, bird flu can adapt rapidly and has several strains, one of these strains, H7N3, was found in April earlier this year in a commercial turkey flock in South Carolina. If this strain leads to an outbreak, this could have devastating effects on the US, which is still trying to recover from COVID-19.

Zoonotic diseases do not only originate from factory farms. One of the most infamous zoonoses is the human immunodeficiency virus (HIV), which developed from the simian immunodeficiency virus (SIV). The spread of this virus to humans is linked to the bushmeat trade in Africa where the butchering of chimps and monkeys likely led to their infected blood entering the butchers’ bloodstreams through cuts, bites, or scratches. The World Health Organization states that since the beginning of the epidemic around 76 million people have been infected with HIV and around 33 million of those people have died of HIV/AIDS. While of course other influences, such as the brazen negligence of the Reagan administration, affected the rampant spread of this disease, the root cause of HIV was the butchering of animals.

The origin of Ebola has also been traced back to the African bushmeat trade. The first victims of Ebola hunted two species of bat that carry this virus. Bats can also indirectly spread this virus by infecting primates who come into contact with bat droppings or fruit that bats have touched. In West Africa, the Ebola outbreak between 2014 and 2016 led to over 11,000 deaths. As similar butchering practices continue, Ebola could likely mutate into different strains and other diseases could arise.

SARS is believed to have originated from a wet market in the Guangdong Province in China. The outbreak began in 2003 and after the initial case, the disease spread to over two dozen countries, infecting over 8,000 people and killing 774 of them. Those infected with SARS exhibited severe flulike symptoms such as fever, body aches, and headaches. Despite this disease originating from eating infected animals, the disease easily spread from person-to-person contact through coughing and sneezing.

The first known case of MERS was reported in Saudi Arabia in 2012. To date, this viral respiratory disease has infected over 2,400 people across 27 countries and killed 858 of them. The World Health Organization has linked camels to the spread of this virus and has provided warnings on the consumption of camel milk and meat. The continued consumption of camels and their milk will allow this disease to pervade and mutate.

The novel coronavirus that emerged in late 2019 in the Wuhan providence of China has unclear origins. Many believe this virus to have spread from a wet market in Wuhan, however, this claim has been recently contested. What is clear is that this virus is zoonotic. Over 23.7 million COVID-19 cases and over 814,000 deaths have been confirmed globally. This number is still rapidly increasing in countries like the United States. This outbreak of COVID-19 has served to solidify what we learned from past zoonotic diseases. The current practices of butchering and consuming animals pose a dangerous public health concern.

What you can do

Even though COVID-19 has devastated our world, there may be hope for the future. Public opinion is shifting on how we treat animals. Lawmakers are working on legislation to ban live animal markets. Senators Cory Booker, Bernie Sanders, and Elizabeth Warren are sponsoring a bill to ban factory farming by 2040. We must hold lawmakers accountable to help end these violent, grotesque industries. Human exploitation of animals has proven to be harmful to public health time and time again.

While waiting for legislators to make the right decision, you can personally help prevent such diseases by reducing or eliminating animal products from your diet. As more people take this step, animal agriculture industries take notice.  Stand up against these harmful practices (and reduce your chances of getting salmonella)!

In addition to lessening your consumption of animal products, you can encourage your elected officials to take action. Sign this petition to support legislation to ban factory farms!

Read More of Our Coverage on COVID and Other Zoonotic Diseases: