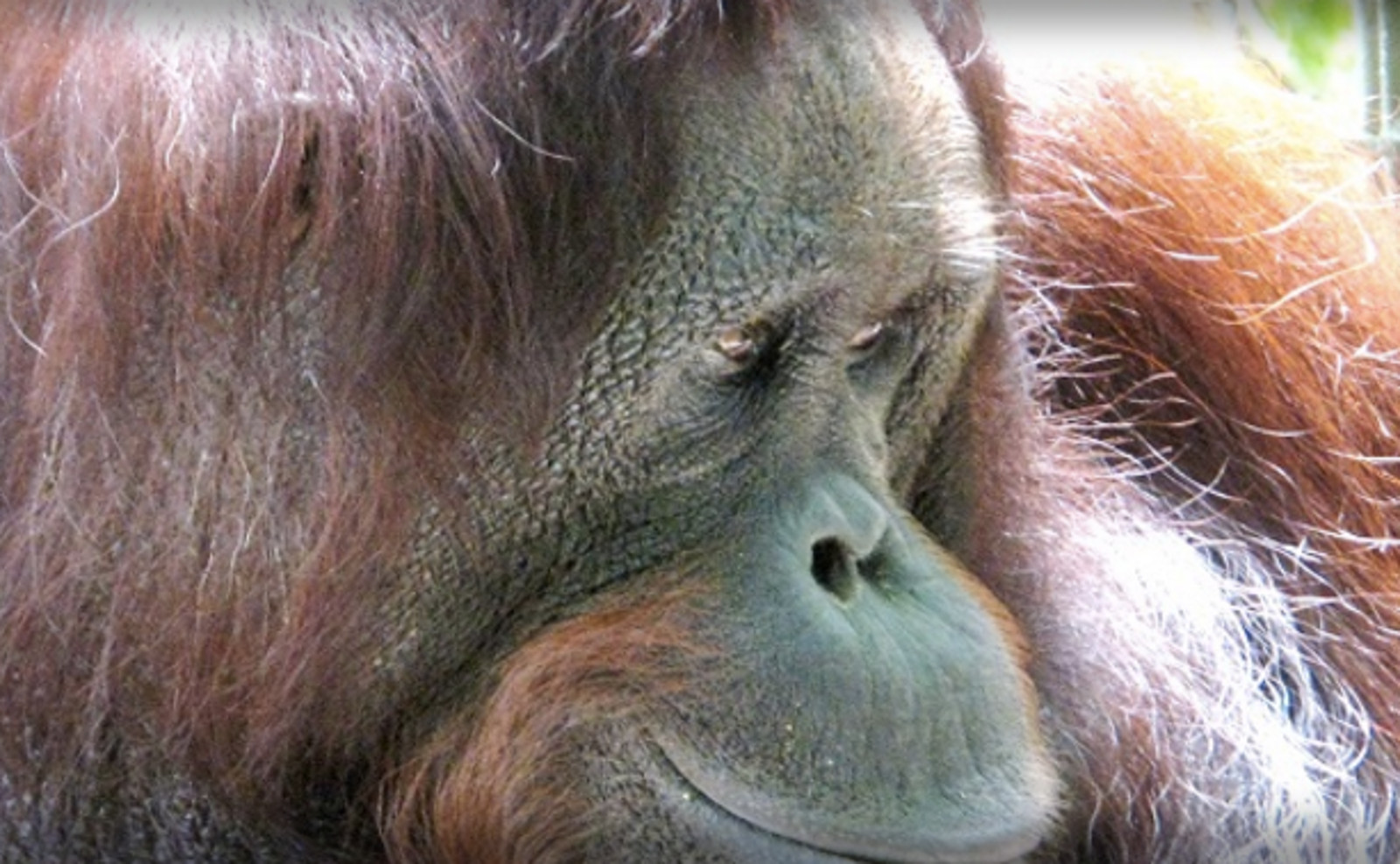 Paul White Chevrolet, a car dealership company in Cabin Creek, West Virginia, is running two commercials, both of which feature an orangutan named Popi. Fortunately, this footage isn’t new. It was actually filmed decades ago when Popi was used as a “performer” by the infamous Las Vegas showman Bobby Berosini. The fact is, nothing is entertaining about the way Popi was treated back then. To make it worse, she wasn’t on her own. Berosini exploited many orangutans to use for “entertainment.” As evidenced in undercover footage taken by PETA, he beat his orangutans and confined them to tiny lockers on a bus when they were offstage. This was Popi’s life for twenty years.

Featuring orangutans in commercials may seem innocent, especially as it’s old footage, but in all truth, there’s nothing innocent about this at all. If consumers and viewers knew the cruelty behind making these animals actors, they would most likely never support it. But by glorifying the plight of these animals and only showing them smiling and dressed up for entertainment purposes, it perpetuates the idea that not only do these animals like being captive but that it is okay to keep them so.

Why Orangutans Shouldn’t be Used for Entertainment

Popi’s suffering is not, however, uncommon. The majority of orangutans and other great apes used for entertainment are stolen from their mothers at a very young age and then trained by way of force, starvation, and fear to perform on command. Considering the fact that orangutans share over 90 percent of the same DNA as human beings, are extremely intelligent and possess amazing emotional abilities, this sort of life is extremely stressful for these animals.

In fact, even the big “smiles” that monkeys and apes are often noted for flashing at the cameras on TV and in movies is actually used to signal uncertainty, nerves or even fear. Subordinate members of a group of monkeys will grimace in this way to appease another, more dominant, monkey.

Showbiz sounds all glitz and glamor, for animals, however, it’s anything but. It’s even worse for social animals like primates. As they are forced to live alone, in tiny cages, they are prone to severe anxiety and psychological distress.

The Life of Popi the Orangutan

Popi’s mother was captured as a baby in Borneo and shipped to Yerkes Primate Research Center in Atlanta in 1963. According to the Center for Great Apes, Popi was born at the Research Center and shortly thereafter sold to Berosini for use in Hollywood movies, commercials, and TV shows.   When she around eight years old, she starred as the girlfriend of orangutan “Clyde” in the two movies and then later appeared in Going Ape with Tony Danza and Danny DeVito.

As if acting in movies weren’t enough for this highly intelligent orangutan, she was also forced to perform in a Las Vegas nightclub for nearly 20 years. Popi and several other young orangutans were used in this show – which might just be the only chance she got to interact with others of her kind during her life up until that point. It was during one of these performances that undercover footage of Berosini was captured, which eventually lead to a huge public outcry that ended with Berosini surrendering Popi and the other apes in his care. This legal action involved in this was the first animal welfare lawsuit to raise critical questions about the treatment of great apes in entertainment.

However, while Popi did win her freedom from Berosini and start a conversation around the use of apes in the industry, she was again sent, along with the other orangutans, to an ape trainer in California. There, Popi continued to perform and was used for breeding, After spending a decade at this compound, she was transferred to a behavioral research facility in 2008.

It wasn’t until 2012, after years and years of abuse and needless suffering, that Popi was retired to the Center for Great Apes, a well-respected sanctuary in Florida, where she still resides today.

Popi was one of the few lucky apes to get a happy ending. Most ape “actors” are abandoned at dire zoos once they’ve outlived their career in the entertainment industry.

At the Center for Great Apes, Popi has all the space, love, companionship, and stimulation she needs. According to the sanctuary, “Popi loves her caregivers and seems to prefer humans over orangutans. She understands an amazing amount of English and is very smart. Despite her past treatment, she is a sweet and gentle elder female.” Apparently she also loves cleaning, playing in water and having her hair brushed by the caregivers. Finally, after years of abuse, she is getting the sort of life she always deserved.

Knowing the sort of life that Popi endured for the sake of our entertainment, running commercials featuring her decades later completely ignores all of the suffering this brilliant animal faced. Popi has finally reached retirement, and it is time that these cruel commercials did as well.

PETA has provided Paul White Chevrolet with details on Popi’s heartbreaking past, yet the company continues to run the offensive commercials. You can help change this by leaving a comment on their Facebook page and urging them to drop the commercials featuring Popi the orangutan.

To help Popi and other orangutans like her, you can support the amazing work of the Center for Great Apes by virtually adopting Popi. Together, we can help ensure a kinder future for captive animals everywhere!